Pick of the ads - Kawasaki Versys 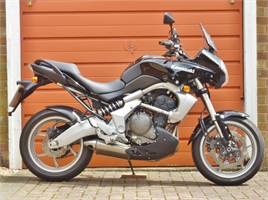 at most things asked of a bike but not a Grade-A performer at any task. It has an upright seating position for a comfortable, clear view ahead and this makes a good choice for commuting and distance rides. There are two minus points to the Versys that are irritating rather than straight negatives. The engine is a buzzy unit within the frame and high pitched vibes do work through to the bars and pegs at high rpm. The screen puts windblast on to the top of the rider’s helmet if over six-feet tall. Everyday use will show the Versys can handle city riding and twisting back roads with ease because of the light steering and ease at which it can be chucked around – wide upright bars help here. Wave-style brake discs not only look good but ensure decent stopping power. Suspension can accurately be described as budget mass production stuff i.e. its damping properties are lacking somewhat. The front end will bury itself into the ground under hard braking and the side-mounted rear shock struggles to deal with bumpy roads. As a cheap all-rounder, this original first model Versys takes some beating. And you can’t argue with the fact that for the price and low mileage it has, this particular example would make a good buy for anyone with a limited budget.