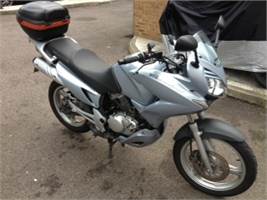 1200 GS and the like. This is why Honda’s baby 125cc Varadero hardly registers on the recognition scale, which is unfortunate because the smaller sibling is a good tool in its own right. The learner legal diminutive output (claimed 14.2bhp) is delivered by a 90-degree V-twin (124cc) engine. The two baby (45mm) pistons will obviously get a hard time from owners trying to get to the approximate 75mph top speed in double quick time but, like the rest of the engine, they’re built to take abuse. The 2007 version received a makeover from the original 2001 bike; this advertised model is the updated one – now fuel injected, revised exhaust with catalyser, fairing mounted mirrors, new dash layout etc. Seat height of 802mm is in relation to the scaled down dimensions of big bro’ Varadero, which at least allows ladies and short-legged men to get feet on the floor at standstill. Riding comfort is actually ok because of the upright riding position – good enough to see out the contents of the 16.8lt fuel tank. As with most 125cc learner machines, it often makes sense to buy a quality second-hand bike if you only need it to pass your bike test – Honda’s XL125 Varadero, assuming it’s been cared for – is a quality bike.

Great condition. Low mileage. New tyres front and rear. MoT and tax until June 2014. Topbox, chain and cover included. New oil and filter 400 miles ago. Small scratch on left wing mirror. Comes with new brake pads for front and rear in packet although brake pads on bike are in great condition. No advisories on MoT. £2400. Tel: 07935 051336.