When the first Fireblade appeared in 1992, it changed our perceptions of big sportsbikes. Until then, litre-class bikes were mostly big, heavy, stable and fast in a straight line but not so good round corners. If you wanted sweet handling, you mostly wanted a 750 or 600. The FireBlade (it took us a while to stop sniggering at the silly name and get used to it) had the power of a litre bike, the weight of a 600 and and the handling of a good 750 - a complete game-changer. And whilst we thought it would prove flimsy and fragile, it was anything but - these things are hard to kill. Twenty six years on we've been through lots of variations on the theme, all with one thing in common: they're often outclassed on track on paper, but usually the best in their class where it matters - on the road. If you've got four grand to spare, there's a wide choice of Blades from the nineties to the noughties. Here's our pick of this week's offerings. 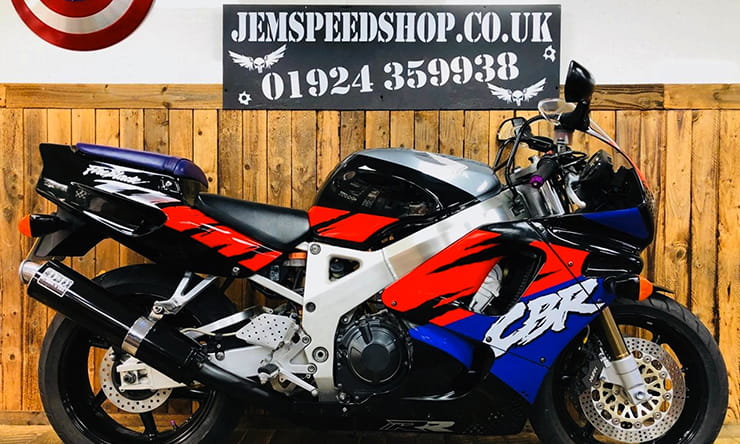 First-generation Blades are seriously sought-after these days, but most buyers want the instantly recognisable red/white/blue paint scheme. This red/black/grey is much less desirable, even though it's a lot rarer! The good news is that keeps the price down a bit, although four grand is still pretty strong. It does look like a good, original bike though - only the end can and brake lines are modifications from standard. Always worth checking frame and engine numbers though - any sign that they've been tampered with, or don't exactly match the log book, walk away. 26k miles is nothing for one of these engines, although we'd still want to check for smoke on startup and any undue rattles. Gearboxes don't like ham-fisted wheelies, and damage to second gear tends to result – if it shows any hint of crunching from first to second or jumping out of gear under load, then budget for a full gearbox rebuild. Electrics are usually reliable, but at this age you could be getting into brittle insulation on wiring and corroded connectors, so check that. We'd also check the charging voltage - the regulator/rectifiers on these are known to be a bit weak. Check the bodywork carefully - the early Blade's plastics were very lightweight and with age they're prone to cracking, especially around mounting brackets. Otherwise, if you're looking for a good early Blade and you're not so worried which paint scheme you get, this looks like a decent buy. Keep it nice and you shouldn't lose money. 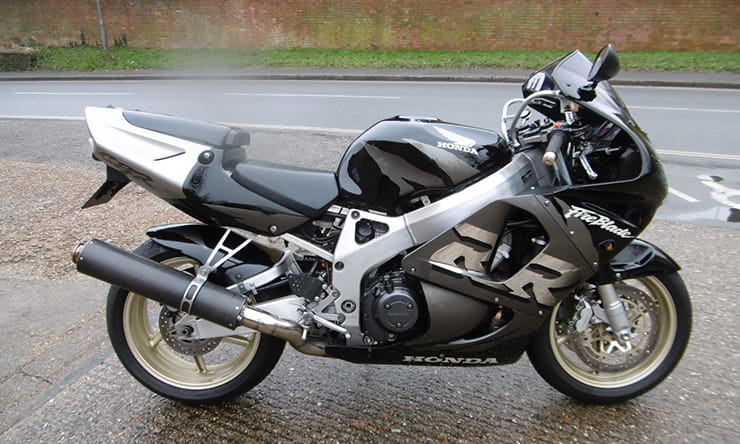 Something a bit different! The 1998-9 W/X Blade was the last of the recognisable original shape, with 16in front wheel. At the time it was comprehensively trounced by Yamaha's new R1 and it's probably the least sought-after of the 90s Blades. But it was still a bloody good road bike - comfortable, fine-handling and reliable. And this one has a hidden boost - literally. Tucked away neatly behind the fairing is a Garret turbocharger, taking the bike's original 120-odd bhp up to a claimed 180! We really like the way it's been done to keep it all hidden and keep the bike looking absolutely standard - until you twist the throttle. The bike's had one owner from new and was apparently converted in 2011 but has done just 1200 miles since then. What we can't see from the photos is whether the work's been done as neatly underneath the skin, and how well it rides - there's a lot of arcane knowledge involved in making a turbo work on a bike. So we'd want to find out if the owner did the work himself (in which case he should be able to talk you through it in detail) or whether it's been done by someone else (in which case we'd want to see details/bills). The actual Ebay listing itself is disappointingly short on information, but it does look, superficially at least, like a nice job, and the rest of the bike looks to be in superb condition. 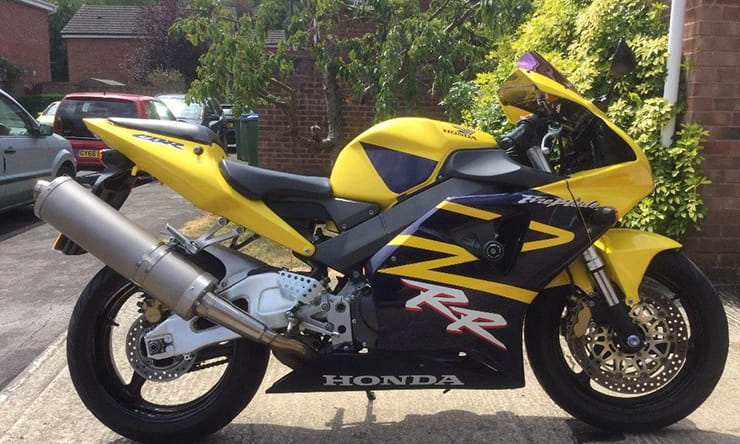 There's a strong argument to say the 2002-3 954cc Blade is the best of the lot. It was the last of the breed to be designed purely as a road bike, with no racing pretensions at all. That said, it's perfectly happy being thrashed round trackdays, and with smooth, neutral steering and great quality suspension and brakes, it'll flatter your riding on road or track. They are a little inclined to minor head-shaking, but it shouldn't be really intrusive - if it is, check the head bearings as bad wear or poor adjustment can be the cause. It's relatively comfortable, with a fairly sensible riding position. Major problems are rare, but you should listen out for top end rattles, especially from cold. Sometimes the cure is as simple as carefully balancing the throttle bodies, but the camchain tensioner is also known for being a bit noisy, especially if it's between clicks on the auto adjuster. Low down fuelling can often be a bit jerky. Using branded super unleaded instead of supermarket E10 might help.  The only way to cure it properly is a dyno setup and a Power Commander or similar, though. Check the swing arm behind the footrest hangers - damage here is a sign of a spill of some kind, so look for other evidence of repairs. Gearboxes aren't the sweetest in the world, but shouldn't be overly clunky - check that it doesn't jump out of second gear under hard acceleration or deceleration. Fixing that can be costly. Rear suspension linkages were under-greased at the factory and can seize, as can the damping adjusters - check that they move freely. This 2002 bike from a private seller in Sussex has full service history up to 15,000 miles, and has only done another couple of thousand since. It looks clean and well cared for and is almost completely standard - well worth a look. 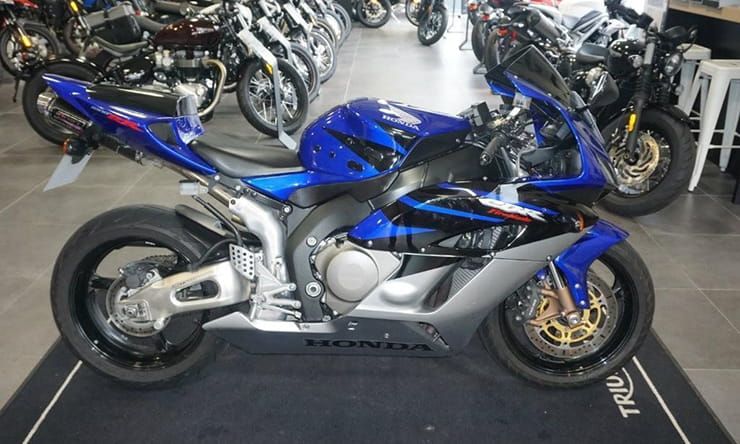 Underseat exhausts were big in the mid-2000s, helping with ground clearance and keeping the lines of the bike clean. But not your clothes - ride one of these any length of time and you end up smelling of exhaust fumes. Apart from that, the first 1000cc (actually 998cc) Blade was heavily styled to look like Honda's MotoGP bikes. It was also the first designed to go racing. With World Superbike rules changing to allow litre-bikes from 2003, Honda were left without a competitive bike for that season, but the 2004 Blade was good out of the box - Chris Vermeulen would have been second or third in the championship but for some bad luck, and he came back to finish second overall in 2005. So the RR-4/5 worked on track, and it still makes a great trackday bike, but it's arguably a bit less useable on the road than the previous 954 and the heavily-revised RR-6/7 which followed. All things are relative though - it's still a better road bike than the ZX-10R or R1 of the time. Reliability on these is good, although the electrics can give trouble, especially the alternator. Uprated aftermarket parts are available. The radial brakes (a posh fitment in 2004!) rarely give major trouble, although serious trackday fiends find they're prone to fade. They can be replaced with the Brembo Monoblocks from later Suzuki GSX-Rs if that bothers you, but it's unlikely to be a problem on the road. The paint finish isn't as good as you might hope, and it's hard to get a neglected one back into shiny health, so look carefully at hidden areas to get an idea of how it's been treated. At first glance, this one looks top be very clean, and has a full service history, which is nice. It has an aftermarket Quill carbon can, which is a plus point, so long as the engine's been set up for it - if not, there may welll be a big fat hole in the midrange. 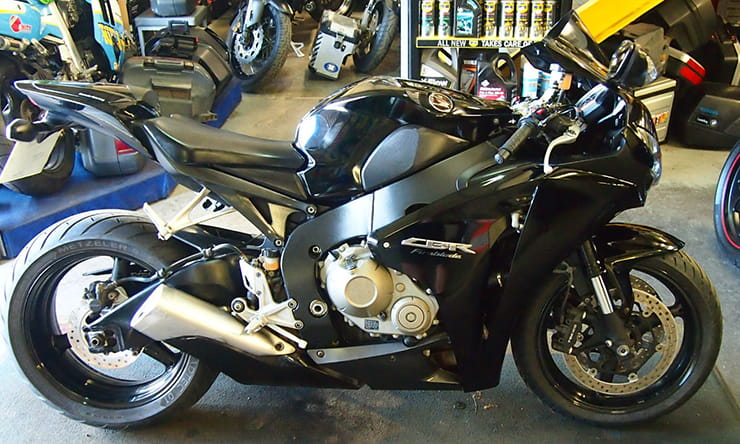 The Blade hardly changed between 2008 and 2016, and hardly needed to, because the RR-8 was so beautifully poised and balanced, with enough power (a real 165bhp or so) for more or less any road rider, instinctive handling and a welcoming riding position. It was easy to get on and ride fast, no stress, no hassle and no knobs to twiddle or menus to scroll or screens to tap or engine modes to choose. It was the last proper analogue sportsbike – just throttle, clutch and brakes. Four grand is on the low side for an RR-8, and you don't have to look far to find out why this one's priced so low - 56,000 miles is sky-high in sportsbike terms. But don't dismiss it - although there were problems with a few early bikes using a lot of oil due to faulty piston rings, those were mostly quickly fixed and it's a safe bet this one isn't affected. It has its original exhaust system, so we'd want to check for rust as they're known for rotting out. On the other hand, aftermarket exhausts fitted without proper setup tend to leave a gaping hole in the midrange. The original rear shock would have been toast at that mileage, so it's good to see it's been replaced with a Nitron unit a year ago, with new front discs and pads at the same time. It's hard to see from the rubbish photos (why put 20 nearly-identical blurry phone shots up instead of actually thinking about what buyers might want to see?) but you'd have to make allowances for the mileage when assessing the condition. The water-based paint on the main panels isn't very tough, and nor is the finish on the wheels, so it's bound to have some stone-chips and general wear and tear. The battery on these is tiny, and marginal for the job even when new, so if there's any sign of sluggishness when turning over from cold, get it replaced with an uprated one. We'd also want to go through all the frame earth connector points - corrosion here can cause all sorts of niggly problems. We'd say forget the mileage, judge it on its condition and the price. You'll struggle to get an '08-on Blade any cheaper.