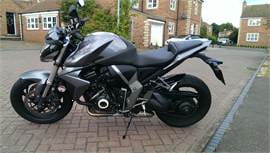 Honda’s CB1000R is another of those perfectly decent bikes that seemingly slips under the ‘capable’ radar, which is a shame. Powered by a CBR1000RR Fireblade engine from the 2007 season, the inline four-cylinder engine is all about usability – it only has a 125bhp rear wheel output but the way it is delivered via a flat, strong torque curve makes the CB1000R a seriously good road machine. Smooth engine response with quiet-turbine-like thrust in the midrange allows for spirited but relaxed riding. Take a step further into the realm of brain-out sports bike riding and the sheer nakedness of the CB will make you pay with neck ache (prolonged 100+mph autobahn use isn’t going to happen) and dire fuel economy – 120-ish miles from the 17-litre tank isn’t good. In normal use expect to see 130-140mpg. Ride quality is typical Honda. Front and rear suspension is fully adjustable and will need to be tweaked to firmer settings for 13-plus-stone riders and pillion use. Yes, the ride is soft but without being unruly and lacks the feel associated with firmer suspended bikes. Other than that the CB1000R makes light work of any type of road at any speed. One thing the CB1000R certainly doesn’t lack is style. Based on the 600cc Hornet of the time, it is sharp-looking but without the quirkiness of, say, Kawasaki’s Z1000 from the same period. We particularly like the all LCD dash display, which includes bar-graph tacho readout. But the ultimate has to be the sexy Pro-Arm single-sided swingarm. The rest of the bike is Honda in the sense it is built to a high standard and every component works totally in unison with the rider. Great bikes are often the bikes that don’t shout out how good they are; Honda’s CB1000R is one of those bikes.

My dream bike, bought new and garaged from then. Fitted alarm, Scottoiler and hugger.MoT and taxed end of June 2014. Selling because I'm getting less and less time to ride and it's such a shame for the bike which just loves to be run. Contact: 01733 390627. Price: £4500