Of course, one man's trash is another man's treasure so while we might think it's ugly, you might consider it a duckling ready to be cared for.

Casting his expert eye over the internet for your benefit is Scott Redmond who has written for almost every classic motorcycle magazine in the UK and for over 25 years he's bought, sold and broken up motorcycles for parts. >From doing deals in person under the streetlights of London to surfing the web and buying bikes on his phone he's purchased bargains, howlers and few he'd rather forget. 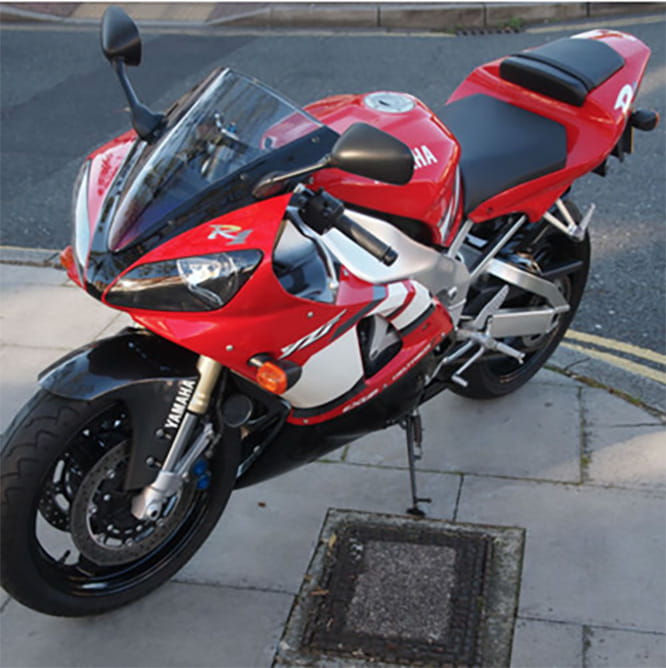 With an average annual mileage of around 64 miles per year on it's once cutting edge clockset this 2002 Yamaha R1 is quite unique.

Not only does this R1 boast less than a 1,000 road miles from new, it's also never seen rain, or road salt.

With the very first Yamaha R1 model widely accepted to be a modern day classic this second incarnation is well worth every penny of its asking price.

The second coming of the R1 saw Yamaha iron out the gremlins from the original 1998 model, no more naughty gearboxes, and lots of minor cosmetic changes all added up to a more polished machine.

What's really cute about this bike is the fact it hasn't been got at, it's totally bog standard, even down to the toolkit under the saddle.

The bike is also a genuine UK supplied machine, a bonus when you consider the amount of grey import R1's that washed up upon our shores back in those parallel import days of the late nineties and early noughties.

A few quid short of 10 big uns for an old R1 might be optimistic in some peoples eyes, fair play, it is a lot of money for a second bike after all, but I doubt that there's another example like it out there, let alone up for sale?

Besides, all prices are negotiable after all.

A 2016 R1 would run rings around this model that's 14 years it's senior, but if that's how you're looking at this you're missing the point.

Next year they'll be more tweaks and the current R1 will be an old model that'll be worth a good few grand less than its current £15,000 rrp.

There probably won't be a queue of people with their cheque books out for this bike, but if you want the best example of a carb model Yamaha R1 that's currently for sale, then you might want to consider contacting Motorcycles Unlimited in Perivale for a natter, all of their contact details are on their eBay listing, tell them that Bike Social sent you.

ANORAK FACT: R1 fans will often refer to the 98/99 model by it’s chassis prefix 4XV. The R1 used a stacked gearbox, this allowed the engine to be shorter than the FZR1000 engine it replaced. The 4XV clocks came with its own fault finding software to help diagnose electrical problems. 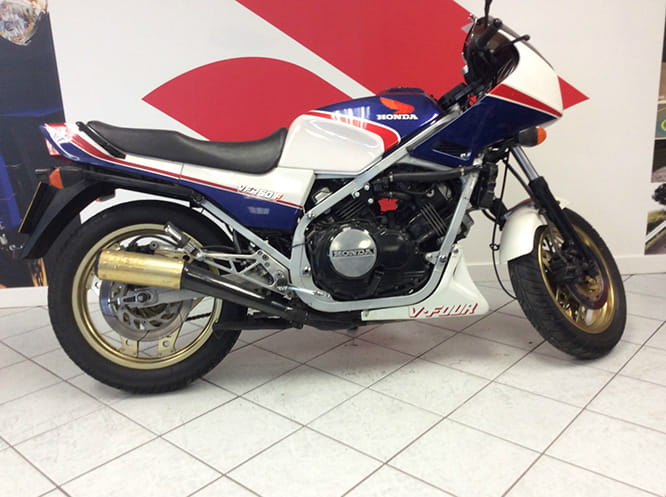 The big H, they have knocked out plenty of bikes that use a V4 engine, some of their most iconic models have a V4 beating away between the frame rails, bikes like the RC30, RC45 and many a 400cc pocket rocket. They all owe this VF750F some respect. The VF750F announced a massive change in direction by Honda in the early 80s, until then they'd been giving the world a constant stream 750 inline fours since 1969.

The new V4s quickly earned a reputation for eating their camshafts, the VF500F and VF1000F also suffered from what become known as chocolate cam syndrome.

I've not seen a VF750F come to market for ages, let alone one that runs! This bike is a honest example of one of Hondas few bad bikes.

The 20,000 miles quoted could actually genuine? It looks quite standard except for the aftermarket silencers, but even they are sensible Neta cans. Being offered for sale as a project with no guarantee implied sounds scarier than it is, it's quite normal for a dealer to cover their arse in this way. The £400 starting price is realistic, there isn't much love for this model, which I think is a shame, for a 30 odd year old bike it still looks good to me. I have always had a soft spot for the Vee Eff, they’re actually a really sweet road bike, the V4 engine delivers plenty of torque, the riding position is dead comfy and this bike was built in the days when Honda were way ahead of the others on build quality.

ANORAK FACT: Freddie Spencer won the Daytona 200 in 1985 on a tricked up VF750F. It was the first street bike to use a slipper clutch. The rear swing arm was sand cast. 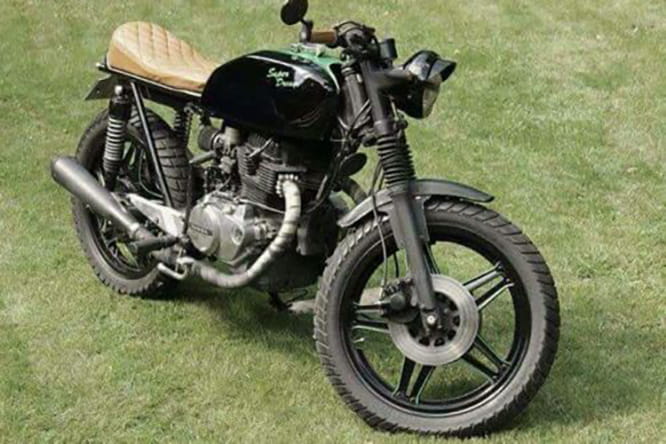 I wasn't expecting Brat! This poor old Honda Super Dream is actually a bit of a nightmare. There's so much wrongness that I am struggling where to start.

The hipster, where did they come from? They are fashion bikers, who prove that money can buy you anything but taste. The Super Dream was a reasonable machine in its day, the back bone of the courier industry at one point, the sensible teenagers stepping stone from small to bigger machines, after all not everyone wanted an RD250. This 'special' typifies everything that I don't understand about the whole Brat bike scene. The exhaust header pipes look like Egyptian mummies. The last time I saw that much bandage I was watching a christmas special of Casualty. That saddle, not only is it beige, but it's got more upholstery than Land of Leather on a bank holiday weekend. Just to make it a little more awkward to ride, it's fitted with what looks like off road tyres? The sad thing is that it looks like it was a well cared for machine based on the wads of paperwork that accompanies the bike. It's a niche market this custom scene, with most owners wanting to build their own creation, and not take on someone else’s efforts. It looks pricey to me and there's a reserve on the listing too.

ANORAK FACT: It uses three valves per cylinder, two inlet and one exhaust valve. It was launched in 1978 replacing the CB400T that had only been available for eight months. The engine lived on into the late eighties in the CB450DX. In the film Purple Rain, Prince rode a variation of the 400 Super Dream. It was a model called the CM400A, the A stood for automatic.