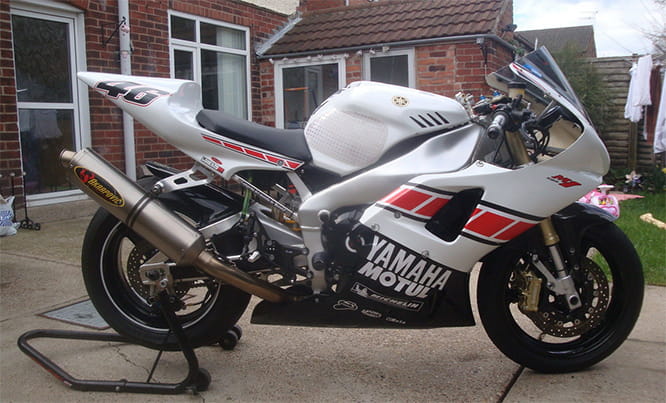 Taking your road bike out on a race track isn’t the straight forward process you’d think it might be. Your bike might feel like the sharpest tool in the box when you’re out ragging it about on the highway, but track time will soon highlight any short coming faster than you can hit the brakes entering Paddock Hill bend at Brands Hatch. A track day bike needs much more preparation than just slapping some duct tape over the lights.

This R1 is a perfect example of a track day weapon.

It started life in 2001, no doubt someone's pride and joy, and at some point in its 15 year history it became a track bike.

There’s still plenty of fun to be had from this old girl and with an extensive list of quality modifications it would be very capable of embarrassing more modern machinery. Helping to haul it up are some funky Brembo radial brake callipers. A very worthwhile investment for those who want to improve their late braking antics, feeding fluid to their guts is a pucker Brembo master cylinder unit.

K-Tech springs prop up the reworked forks and an Ohlins unit sits proudly in the rear. Again both priorities for a bike that’s going to propel you around a circuit.

With a genuine 126BHP being created by the 1000cc motor it might not sound too impressive in these days of 150BHP plus street bikes, but with the carbon air box from the ample spares kit provided and some fiddling, the seller is confident that somewhere between 140 and 150 BHP is within the grasp of the new owner. The Akrapovic exhaust that’s already employed would compliment those upgrades nicely. 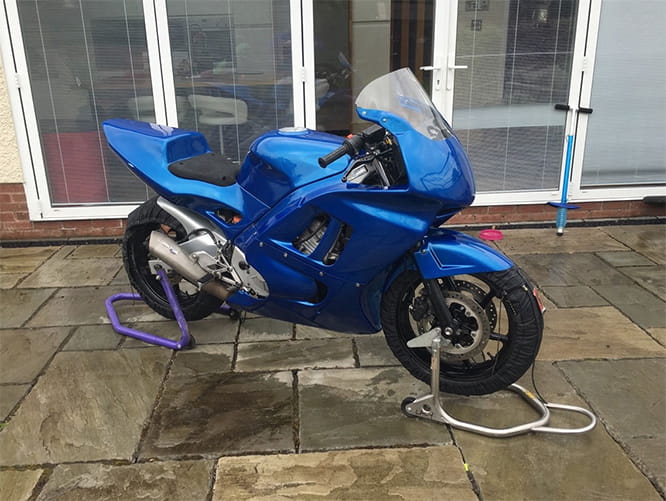 The Honda CBR600, in the 90s it dominated everything from the showroom sales figures to winning club races. All this from a bike with a centre stand fitted as standard.

They sold by the boat load and the 1991 FM model was when the CBR600 really became the jack of all trades. The previous jelly mould model suddenly looked a bit silly in comparison.

The FM model lived on with a few nips and tucks along the way right up until 1998. It was only then that Honda let the steel frame rust in peace and the new FX model arrived with the all important alloy frame.

The alloy frame might have been trendier and lighter but the good old steel frame was stronger and also easier to true up should it have an impact.

Many track bikes will endure a crash. Anything from a slow speed slide to a vicious high side. The repair bills can often run into big figures at best, or require a new chassis at worst.

You could lob a CBR600 off a cliff and all it would need would be a dust off with some T Cut, they’re that solid.

Over the years loads of stellie CBRs have ended up on the track, most clubs have or still do run a competitive class for these sturdy 600s.

With so many options open to a track going CBR you’d think prices would be higher, for £1,195 you could buy this track day ready Honda.

You might be concerned thinking at that price it was an old nail, but the advert reveals it’s had much love and attention, and of course being a Honda it’ll run like a watch and just keep on going. 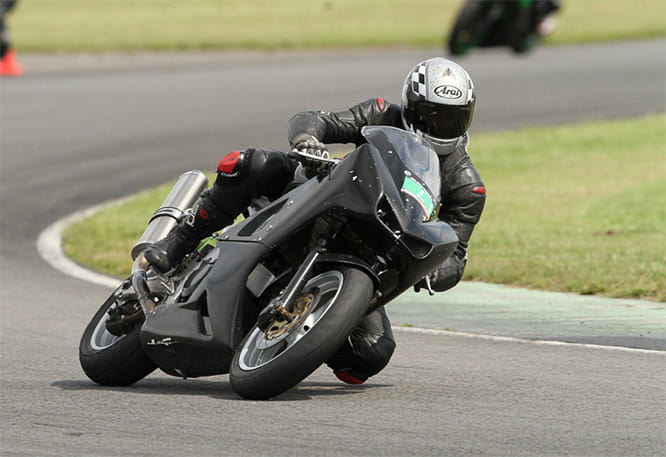 I’ve never really liked the look of the early SV650, it’s something all these years later I struggle to put my finger on. The concept was simple, create a machine with a v twin engine that looked a bit like the Ducati Monster, something Suzuki managed to do with reasonable success. There’s still room for the SV in the current Suzuki range, so their initial R&D was well on the yen.

The SV650 was used in a race series, Mini-Twins, where a grid full of identical machines battled it out. It was cheap and addictive racing for those who took part.

Suzuki updated the SV a few years in, giving it a beefier chassis and fuel injection. It was a superior machine in pretty much all ways, it even looked better.

Those early Mini Twin race bikes make perfect track day toys, this example is typical of a good one.

It’s had an enthusiastic owner who’s made some sensible mods to the bike. Things like Nissin four pot brake callipers, a ZX6R rear shock and trick Koso race dash, each of these helping to either reduce unsprung weight or performance.

It would make the perfect entry level bike into the world of track days, yet still be capable of chasing superior machines with an experienced jockey at the bars.

Do you have a track bike? Tell us about it.  or