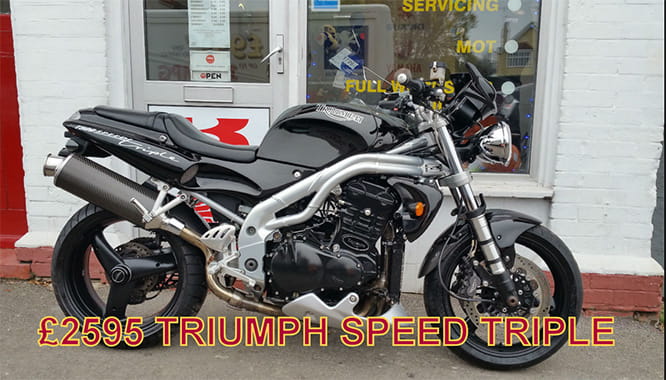 With the launch of the new Triumph Speed Triple R last week, it jogged my memory on just how much of an impact the original alloy framed T509 Speed Triple had when it was launched back in the mid nineties. Time, it's been very kind to the lines of the naked sportster. To some it was the basis of a streetfighter project, which is why I'm chuffed to see this example that's survived pretty unscathed in its 19 year life. The sound of these three pot motors is addictive. This is the original 885cc version, it would see its cubes tweaked over the years.

Prices for all the decent early models from Hinckley have crept up over the last few years. Many models have earned their classic bike wings, although this means prices have rallied for these ageing machines. If you did fork out the £2595 asking price for this example, you'd be pretty safe knowing that if you looked after it you might return a profit if you stuck with it for a few seasons. This is unlike the latest model that was launched this week, which will no doubt get another makeover within a year or so? This bike is fitted with a few sensible mods. A bellypan adds to the cosmetics, and a carbon silencer and reworked ECU will liven up power delivery and the soundtrack. When it was new it lived in the shadows of the fully faired T595 Daytona, looking back at it now it’s obvious the Speed Triple was actually the better bike. This was the first time that Triumph had used fuel injection on a road bike.  unlike some early Japanese manufacturers attempts the Hinckley boys did a decent job of using the new fangled way to squirt fuel down the inlet ports. The bug eye headlamps are a design classic, big, bold and chrome, just like your dad would’ve had on his Trumpet all those years ago.

Triumph pioneered the use of fuel injection in their range on the T509/T595 models.

Tokico six pot brake calipers from various Kawasaki and Suzuki models are a direct fit to the T509 forks. 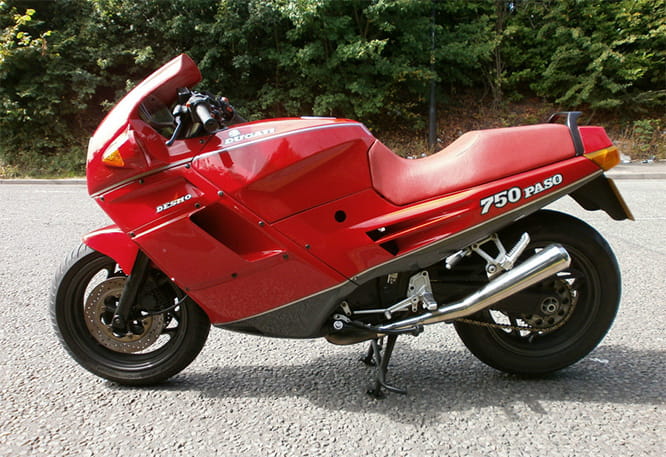 The badness of the Paso is more than skin deep. Many manufacturers flirted with 16 inch front wheels in the 80s and 90s, but most quickly gave up on the tiny hoop and settled on the 17 inch hoop. This Paso uses the quirky 16 incher front and rear. Finding decent tyres 26 years on might be a bit of an adventure for any prospective buyer.

The details on the advert are scarcer than fans of the looks of this Italian stallion. The 750 Paso was built between 1986 and 1988, making it possible that this bike might have sat around unsold for a few years seeing that it’s declared registered in 1991? The 750 Paso was quickly replaced by the superior 906 Paso, with a water cooled engine it was a superior steed.

The owner confirms the all important belts have been changed in his listing,. That should save the next owner a few quid and him thousands of questions for seller enquires. It’s not one of Ducatis finest models, but at a couple of grand it’s one of the cheaper ways into Ducati ownership.

Anorak facts: The Paso was named after Italian racer Renzo Pasolini, who was killed at the Italian GP in 1973.

The Paso was designed by a certain Massino Tamburini, you might know him more for creating the 916 family.

The engine from the Paso lived on in the Monster 750. 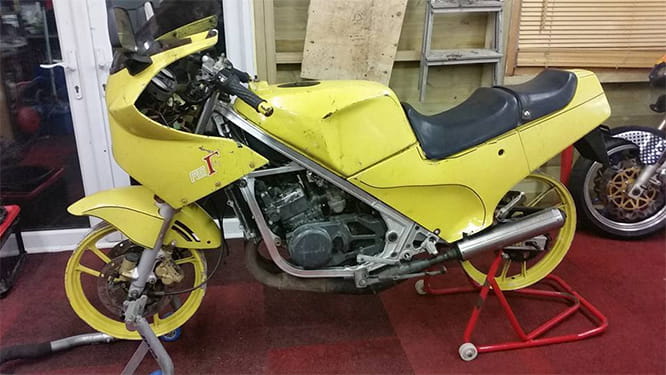 With daffodils popping up and even the odd lamb to be seen in the countryside, the first signs of spring are in the air, so what better time to treat yourself to a winter project?

This Suzuki RG250 could keep you in the shed for a good few winters the closer I look at it.

The bike was last used 12 years ago and since then it’s been dismembered and stored in boxes. That’s about where the good news ends. The bike looks like it had a hard life prior to being hung, drawn and quartered.

Projects can all too quickly turn into money pits. This Gamma has all the hallmarks of rinsing your bank account. It might be a better option to raid what’s there for spares, or most cost effective to resell the used parts on to other folk who are restoring a MK3 Gamma 250. There’s also another angle that went through my mind when I saw it, it’s the perfect starting point for a YammaGamma. Dump that 250 engine and find a RD350 YPVS engine to fill the frame, it’s still a popular conversion.

Anorak facts: The RG250MK1 was the first Suzuki road bike to use an all alloy frame.

Stan Stephens is regarded as the first person to build a YammaGamma. The MK3 RG250 came with the AEC valve in the barrels, it was Suzukis version of the Yamaha Powervalve System.