This weeks selection comes in the shape of Honda's legendary six-cylinder CBX1000: 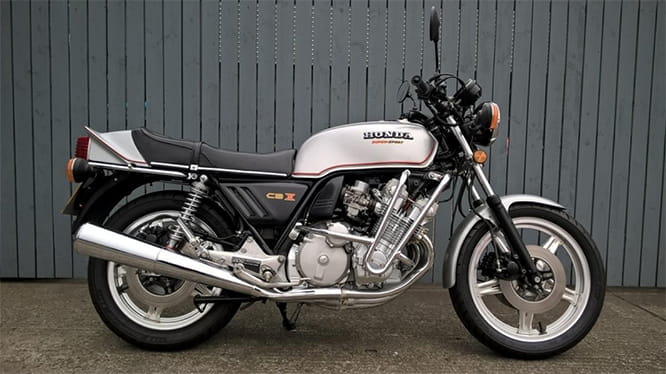 They say that the original is best, but when talking about six cylinder motorcycles that statement fails to stack up. Benelli beat the Japanese to producing the worlds first six cylinder street bike, although it wasn’t too successful.

In 1978 Honda did the job properly, and wowed the motorcycle world with their CBX1000.

The bike was an instant icon, and almost forty years later it’s still the best six cylinder motorcycle produced. The first model ran for a few years and other than a choice of colours it was left alone to bask in its glory.

The chassis coped with the bulk, the skinny forks and wheels were often changed by owners in their sheds for more modern running gear over the years. There are still quite a few standard bikes around, and they come to the market on a regular basis. Prices have risen over the years, and a few have busted the £20,000 barrier. For that kind of wonga they have to be top notch, prices work backwards from the bikes at the top of the tree.

This bike looks fabulous, it’s a stocker and looks like it’s had an easy life. There’s less than 9,000 miles on its six bores, though the seller doesn’t mention anything about a paper history of the bike. The crucial part is the exhaust, a non standard exhaust might perform better than the six into two item but it sheds pounds from the bikes value. They’ll never be anything like the CBX again so if you fancy owning one, now’s a good time to buy into the icon.

The 80s arrived, and Honda had its eye on the future that lay in V4 engine configurations not six cylinder across the frame multis.

The Pro Link model took everything that was good about the Z model and ruined it. The handsome unfaired bike was given a new set of clothes.

The fairing came from the CB900F2C, and once you got past its looks it was actually brilliant at its job.

The twin shocks were replaced by the Honda Pro Link system, giving this bike its nickname. On paper it could’ve worked but the reality was very different, with bikes like the Yamaha FJ1100 arriving on the scene the Honda looked even more lost. For years many dealers had to dust unsold Pro Link CBXs.

But hold on, there is a silver lining for this ugly bug, it’s now the cheap seat if you want to experience CBX ownership. Prices for the early bikes are way over double that of a good Pro link bike.

This bike is a perfect example of this as it’s on the market for £6,999. It’s had four owners and other than the Kerker exhaust it looks pretty stock, even better the stock exhaust is included but will need refurbishing. 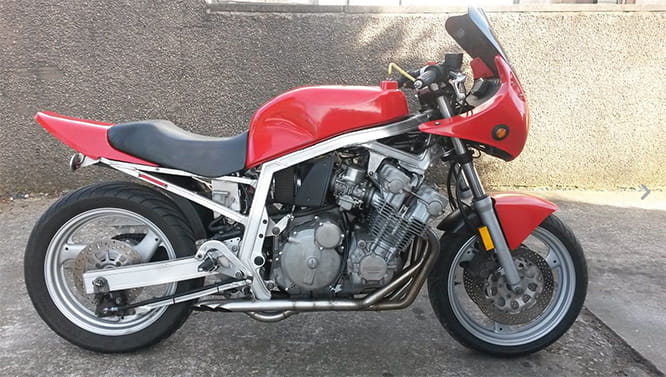 Where do I start? This abandoned project takes the spirit of two legendary motorcycles and the end result looks like an explosion in a breaker yard.

The GSX-R750 chassis wouldn’t have been my initial starting point for a CBX project. The engine dominates the bike, and looks very out of place.

That’s not to say that with lots of love it could be made more at home?

The seller suggests the bike could  be a hillclimb racer? I feel it would be an uphill struggle to achieve that. With the hysteria in Shoreditch at fever pitch for cafe racer specials, I feel that’s where this bikes next owner could come from, the Whitechapel Road is also fairly straight, as the thought of too many twisties with this Frankenstein machine leaves me cold.

I’ve no idea how much a CBX1000 engine goes for these days, but whatever it is this project should be pitched around that ball park price wise. At £5,000ish it sounds too steep, maybe that’s why it’s offered for possible hillclimb duties?