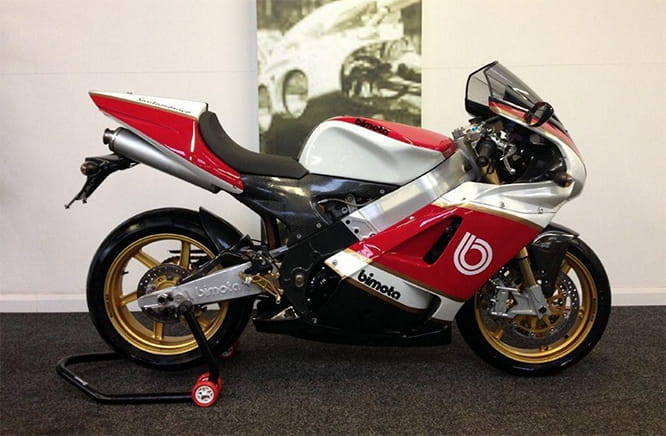 There’s no such thing as a cheap Bimota, quality always costs money.  For over 40 years the Italian chassis builders have fabricated frames to wrap around a variety of engines, most of which become instant classics. Bimota have dipped their toe into racing over the years, and in the year 2000 Anthony Gobert gave Bimota a win in the World Superbike Series.

Things went a bit iffy for them for the next few years but with new money pouring at the factory the production line started rolling again.  The SB8K was a tribute to that WSBK win.

At its heart pumped an engine from the Suzuki TL1000R, with Bimota reworking the fuel injection system the power went up by 20BHP, which was further helped by the chassis being 55lb lighter than the TL1000R.

This example is as new with only 1 mile on the speedo it’s one of only 75 that Bimota built.

The quality of the engineering is simply rude. The chassis a mix of top notch alloy magic coupled with carbon fibre lovliness.  Every chassis component was top drawer in its day. The SB8K is too modern to be a true classic, but in time it’ll mature nicely. At just under £19,000 this isn’t a bike that anyone would buy on a whim, although that said a Bimota is never going to be an impulsive purchase 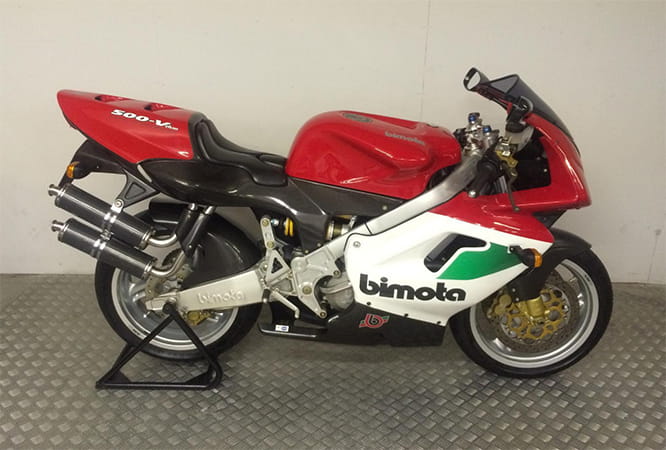 Hype, it’s one of those things that so often leads to disappointment.  It’s 1997 and Bimota deliver their V-Due baby to an expectant world of motorcyclists. The looks of the exhaust silencers might look like the result of a forcep delivery but in truth the love child from Bimota is still born. Those customers who stumped up the cash for the cutting edge machine quickly demanded their money back after reliability issues reared their ugly head. Bimota had bitten off more than they could chew. Their skills at knocking out a decent chassis were never in question, but the 90 degree v twin two stroke engine was the bikes achilles heel.  Adding to the grief was the fuel injection system. It was a step too far as the initial batch of 150 bikes was all that they built. Ironically it could’ve been so different, and in 2001 Bimota tried to flog the dead horse of the V-Due concept again but stuck carburettors on the bike instead of the ill fated injectors.

Fast forward to 2016 and the V-Due is now an emerging classic though I’m not entirely sure why? Sure it’s a thing of beauty from a technological point of view but it isn’t one of the prettiest bikes from the Bimota back catalogue. The two stroke brigade of fanatics are also torn. To some it’s a pinnacle to others it’s a pile of pooh, a bike that offered lots and delivered very little. One thing that is for certain, the likes of it won’t ever be built again, whether that’s a good or bad thing depends on what side of the fence you’re sitting? 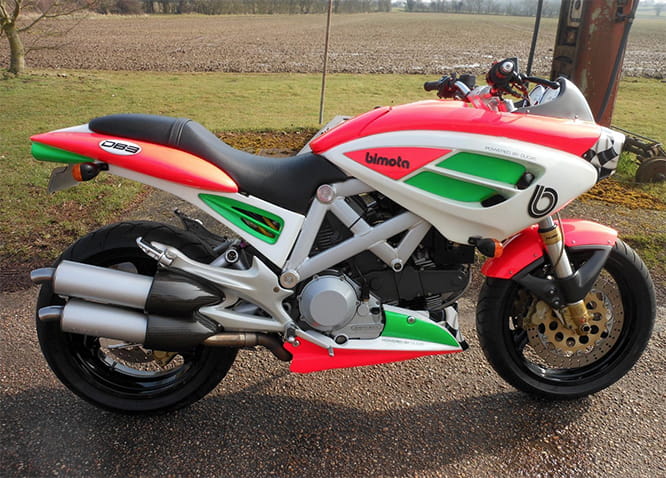 If you think that all Italian motorcycles are stylish then you might want to look away?

You have to wonder what Bimota were thinking of when they took this design from the drawing board to the production line? It’s not like times been kind to it over the last twenty years. It’s still capable of making mothers cover up their childrens eyes if one should ride past. The Mantra was the answer to a question nobody had asked, but from every negative you can find a positive. The plus that this bike delivers is it actually makes a really great street bike, which isn’t really that surprising I guess when you remember that Bimota built it.

Powering it along is the engine from the Ducati 900SS, a motor that’s more than capable of sticking a smile on any riders face.  The good news though doesn’t last long as £13,000 for a motorcycle is a lot of dollar now. Back in 1996 it was seriously top heavy for a bike that looked liked this which might explain why Bimota only managed to shift 454 units during the models lifetime.

Have you ever owned or ridden a Bimota? Tell us about it.  or