BikeSocial is at the press launch of the spangly new Honda Fireblade this weekend, but if it's a second hand 'Blade you want, you're in luck. With a heritage spanning 25 years, there are plenty of used ones in the marketplace, but to help you in the minefield that are the online auction sites, our man Scott has been taking a look at what's currently on offer in this week's instalment of 'The Good, The Bad and The Ugly'. 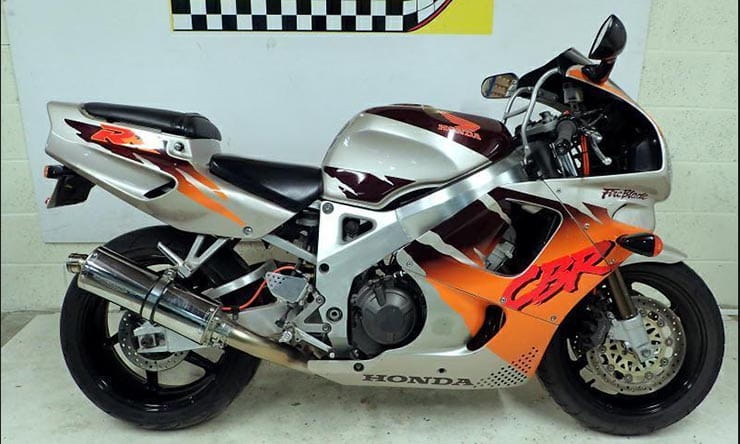 The original RR-N Fireblade that arrived in 1992 really put the cat among the pigeons within the big sports bike market. A few years later that cat became a tiger.

Beige isn’t a colour that’s overly known for being trendy,  but some 20 years later that brown scheme from the Nineties is still trending. The reworked 'Blade also got a prettier face. Those bug eye headlamps from the original model morphed in to the ‘foxeye’ lamp. Honda had sharpened the 'Blade to keep the bike on top of the heap. They made lots of minor adjustments to the whole bike including suspension updates and bigger holes in the barrels. The capacity went up to 918cc but the 16" wheel remained, a subject that still creates a debate today. These days, those Urban Tiger models are highly sought after and they command a premium over the less distinctive paint jobs that adorned the other RR-S models. This offering isn’t 100% original, but to be fair not too many sports bikes ever remain stock. This one sports the typical modifications we are all guilty of adding to bikes after the manufacturers have invested zillions of quids of yen designing the bikes. The standard can is long gone and things like aftermarket brake lines are a worthy mod. At £3,295 you really are being asked a premium for these classic colours. If it was a red, white and blue version it would be at least a grand less.

The 17" wheel from certain CBR600s, VFR750s and even the Firestorm and Blackbird will fit the early 'Blade.

The holes in the fairing nose and belly pan were there to make them easier to throw around. They were said to allow the air to pass through them. 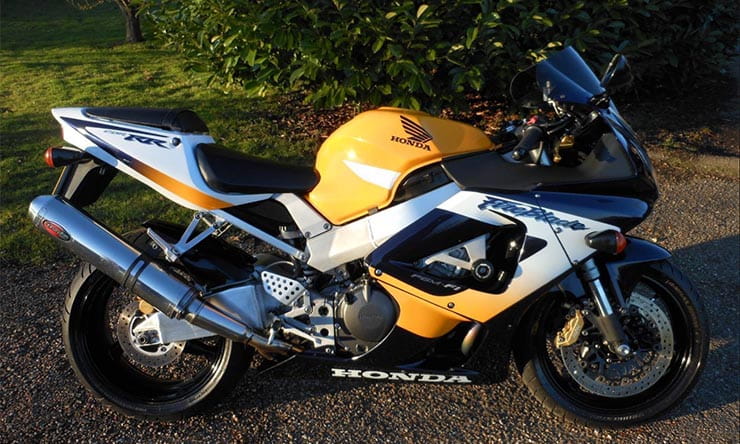 All good things come to an end and the RR-Y Fireblade kind of proved this.

Honda had to respond to the kicking it was getting from the Yamaha R1 and the GSX-R1000K1. The old carburetted 'Blade belonged in the last century and the RR-Y was the future. Fuel injection may have gone mainstream but not everyone could get it right, not even Honda. Many magazines moaned about snatchy power delivery and sadly they weren’t wrong. It wasn’t just the fuel injection though that spoilt the bike, its looks were another talking point. The fat face housed a massive headlight, which might have been a bright idea at the time but to some it looked like something from a car.

The engine and frame were all new and it wasn’t until Honda stretched the 929 motor out to a 954cc unit, that it really came in to its own. The new model in a way became a stop gap. This bike is a stunner though. It’s got a full service history and it’s only covered 25,000 miles in 16 years.

There are a few non standard bits. The silencer is the obvious visual one that stands out. It boasts fresh consumables and is up for grabs at £2,995. That’s plenty of bike for the buck.

The NR750 was the first Honda road bike to use fuel injection.

Honda ditched the 16" wheel for the RR-Y model and they’ve never gone back to it. 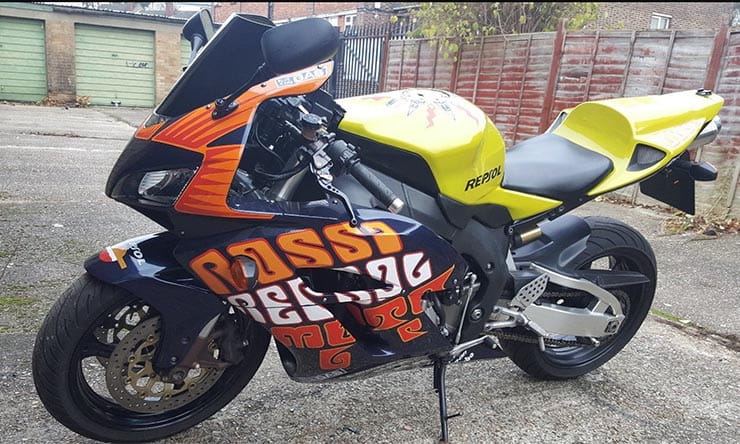 The first full litre 'Blade was another clean slate attempt at creating a new sales topper. The bike was well received but instantly forgotten when the next reworking took place in 2008. The design is inspired buy MotoGP bikes of that era. The under seat exhaust was a craze that came and went quite swiftly. I like the look of it, but it added weight and eventually the stumpy silencer replaced the up and over design. Trying to find a good pre-2008 CBR1000RR is pretty tough. Those who own them tend to keep hold of them as they were the last of the big sports bikes, in a physical sense. The livery is a replica of the colours sported by Valentino Rossi at the 2003 Valencia Grand Prix, his last as a Honda rider, but it hasn't dated well. There is a good bike hiding under that horrendous paintwork, though. The advert reveals its done around 40,000 miles, that could also put many potential buyers off, but why? If this was a 2004 Ford Focus with that mileage you’d be well chuffed! At £3,050 it’s probably the cheapest CBR1000RR on the market and with some fresh panels it could still put a smile on your face.

For the bigger rider this model is actually fairly comfy, the last 'Blade to built for comfort and speed.