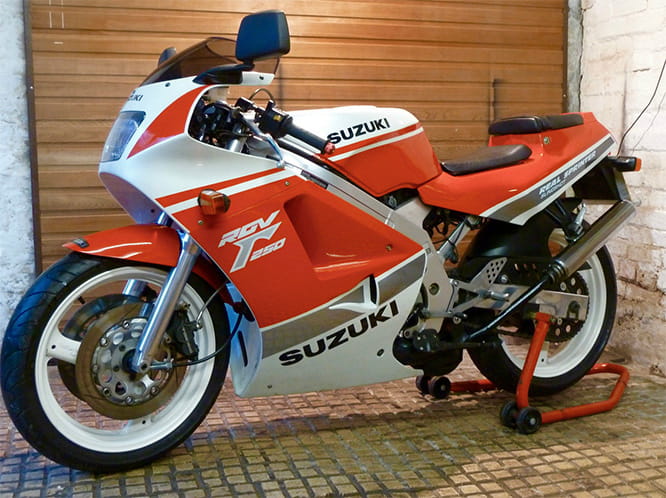 The RG250 Gamma wasn’t a bad bike, but it was never fast enough to tackle the Yamaha 350YPVS head on, never mind their TZR250 that it went head to head with. After three incarnations Suzuki realised they needed to build a totally new model, so in 1989 the RGV250K arrived in a showroom near you.

It was a sales hit. Those YPVS350s looked rather stupid all of a sudden, and their was a new kid on the stroker block. The RGV didn’t have it all its own way though, Kawasaki had the KR1 to do battle with, and the TZR250 was now very much the bridesmaid of the trio of 250s.

The water cooled  v twin engine was pretty solid, any major mechanical nightmares usually brought about by either poor maintenance, cheap oil or just a lack of mechanical sympathy.

The RGV was and still is proper pretty. Everything about its dinky proportions work, but less so if you’re the wrong side of jockey weight.

This bike looks dead original. The seller fesses up to their being some non standard bolts and fixings, and that the bar weights are non standard. In fairness it’s survived pretty well when you consider how much anodised tat was sold to RGV owners back in the day.

I really like the fact that it’s not a blue and white one, they do look dead smart in the corporate Suzuki strip but the red version works equally well in its own way.

Living with a classic two stroke everyday isn’t really a viable option, but for a sunny Sunday afternoon blast, you’d be hard pushed to find anything more fun. 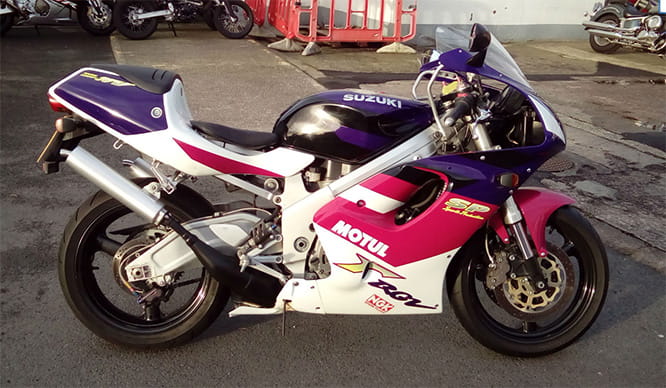 It’s 1996, the emission police have arrived and the future of the two stroke is all but doomed, but in Japan they carry on churning out tasty strokers.

The VJ23 never came to the UK officially, but over the years a few have washed up on our shores.

Suzuki retained a v twin configuration but tightened the angle of the V to 70 degrees, exactly the same as they used on their works XR-94 250 race bikes. The racing dna didn’t stop there, a close ratio gearbox lived inside the crankcases and a dry clutch unit added kudos and kerb appeal.

Sadly the good news ends there, as being sold to the Japanese market meant power was capped at around 40bhp. The looks of the VJ23 aren’t everyone's cup of tea, and when compared with previous RGV models you have to admit it isn’t the prettiest sister from the family photo.

The VJ23 hasn’t ever been a cheap entrance into RGV ownership, and this bike is priced quite richly when compared to older models from the range. Suzuki never made another RGV model, which probably isn’t a bad thing? 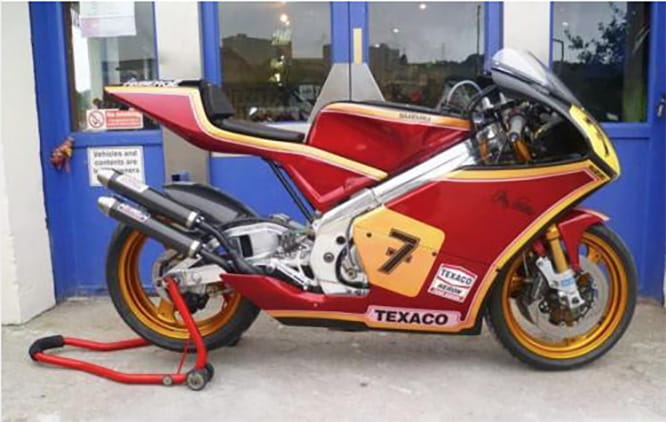 Nestling in between the VJ21 and VJ23 is the VJ22. The first model from the 22 range was the RGV250M which arrived in 1991 wearing all the right bits on its dinky chassis. Upfront were upside down forks, and propping up the back was a banana shaped swing arm (by the P model that lovely touch became an over braced item). Underneath this boxy looking bike is a RGV250P. The temptation to fit aftermarket parts to your bike is always being touted at you, somethings add safety, security or just make your bike more personal to you. The body set  on this RGV is always going to create some discussion, the fairing etc made by Tyga racing, who have a whole range of quirky bodywork to fit a selection of models. I am at a loss why anyone would want to loose the GP inspired looks Suzuki gifted the VJ22 with and replace it with something that looks much more awkward in appearance.

The Sheene replica paint just adds to my confusion. By the mid 90s Mr Sheene was well into retirement, and the Texaco tones of the paint job shout out to a decade well before the 90s when the VJ22 was in production.

The strange thing is that under the Tyga kit lurks a decent bike which has obviously been loved, but we must remember that love is blind.

So, any take your fancy?  or