It's Halloween this weekend so, to celebrate, we've been taking a look at some of the horror shows that are out there in Internetland. Specials and project bikes are always a bit of an acquired taste and we think that these three are sure to polarise opinions. Let us know what you think by using the comments section at the bottom of the page. 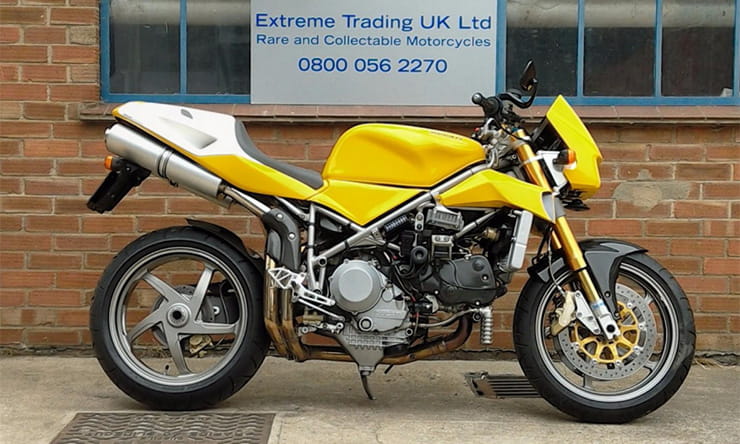 The Ducati 916 and its many variations are accepted to be not just classics of the modern age but also design icons. That Massimo Tamburini design that first broke cover in 1994 still looks sharp, edgy and beautiful. This 998S is bursting with trick parts, but is it a treat?

If you’ve ever ridden a Ducati 916 or one of it's relattives, such as the 748 and 996, you’ll be aware that they are not everyone's cup of tea. It’s a focused bike that only gets happier the faster you go and the smoother the surface is. Many have ended up crashed over the years, and trying to find an honest one is getting tougher and tougher as the years pass.

The thought of a Ducati streetfighter might leave you feeling spooked out but it shouldn’t. This bike looks dead smart and with its bright yellow paintwork, a traditional Ducati colour on its smaller sports models, it isn’t going to get lost in the crowd. This bike isn’t your typical lashed up ‘fighter’, it appears to have been built with love and a plan. I particularly like the fact that the battery is now relocated under the seat instead of hanging over the right hand side of the engine, giving the big L-twin motor its chance to dazzle bystanders. The fairing is long gone but I think it actually looks well suited to the sit up and beg stance.

This particular bike started life in Japan and given some of the customising that I’ve seen bikes subjected to back in the land of the rising sun, I think this Ducati got away lightly. You could always buy it and convert it back to factory spec, but I bet once you’ve tried this sensible riding position you’d probably put that idea on hold.

The 998 model used the Testastretta engine first used in the 996 model. 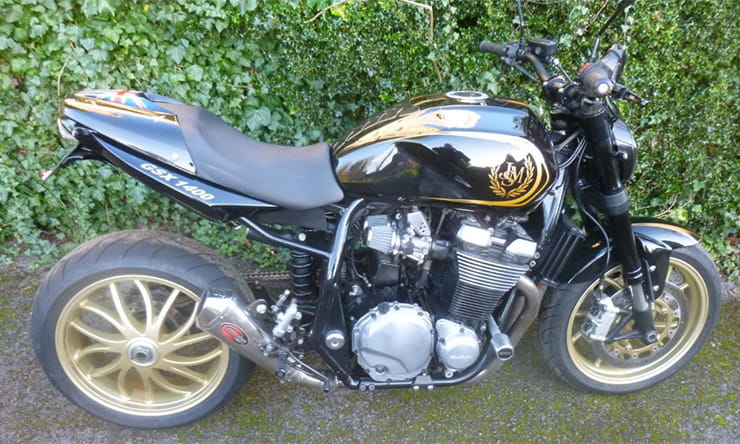 My eyes are still hurting, there’s just too much going on with one bike.

The Suzuki GSX1400 was a decent bike. It wasn’t a massive sales hit in its day but with time it’s chiselled itself a loyal band of followers who appreciate the big and bouncy GSX. Back in 2002, someone discovered just how bouncy they were and this particular bike became a statistic. Its recorded as having been a Cat C write off and since then it’s become a show bike, a true one off in the world of streetfighters.

The Suzuki front end was junked in favour of a Triumph 1050 one, while bigger changes occurred at the back. A Honda RC30 single sided swing arm was grafted to the frame. The paint work confuses me. The Union Jack flag painted on the rump of a Japanese based bike is something I’m at a loss to understand. Creating something so bespoke doesn’t come cheaply and I dread to think how many pounds were sunk in to its creation. The flip side though is that when it comes to move on a special, you'll be trying to sell something that's very personal. The asking price for this tricked up GSX1400 is £4,500 but it’s been reduced by two grand since coming to market. Ironically a nice standard GSX1400 would easily sell for the same asking price.

A popular conversion with those wanting more power is to junk the fuel injection and fit carbs instead! 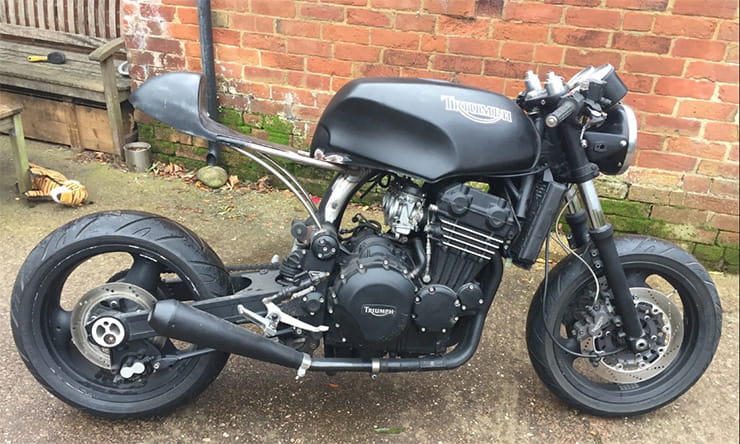 It’s all too easy to start a project, finishing it is the hard part.

This poor Triumph is sadly now another unfinished project. A quick spy through the advert reveals the standard parts are with it and a shame the bike wasn’t allowed to grow old gracefully. Perhaps it might make more sense for the next person who puts their name in the logbook to simply retro fit the stock parts? The direction that the project is going in doesn’t look too positive. The seller builds projects for a living and even suggests that you could pay him to finish it off? The cynic in me wouldn’t be too keen on that idea. On the plus side the asking price isn’t too spiteful. At £1,100 there’s a decent chance that a reasonable offer could be accepted. I personally wouldn’t be tempted though.

There was a race series for the Speed Triple and every so often an ex-racer from the series appears for sale.

The early modular concept that Hinckley factory adopted means it’s quite easy to upgrade a lesser model into a more desirable one. Triumph Trophy anyone?