This week's selection relates to the European football Championships and some Euro vote that appears to happening. Here are the Euro bikes: 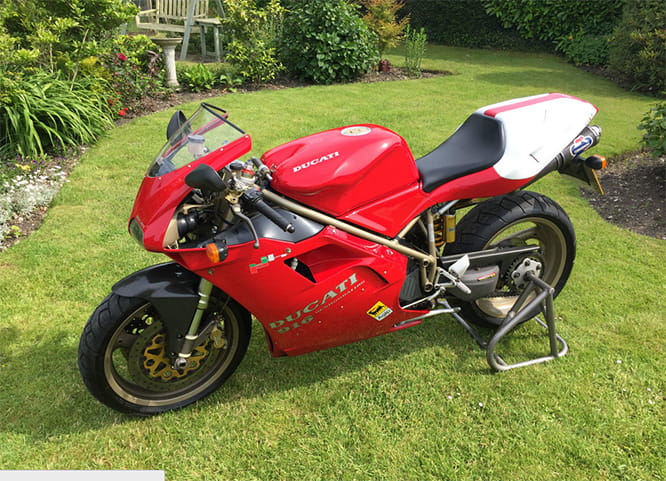 There wasn’t too much wrong with the stock 916, though this didn’t stop Ducati launching various reincarnations of the original 1994 Tamburini design. The SPS version is one of the finest variations on the 916 theme.

At the heart of the bike is a reworked engine. It’s vitals got tweaked resulting in a capacity of 996. The bike was the base for the Ducati WSB entry.  The road bike was a limited edition, and all these years later the DVLA database suggests that there’s only 3 of these machines registered in the UK. This bike is number 257 from that original batch of bikes.

The owner is giving up bikes. He’s owned this bike for a decade, and in that time only added a handful of miles to the 996s bores. Despite the low mileage over the last ten years he’s kept it fully serviced, and done the all important belt changes too. The bike does have a category C marker on its head, which means it was accident repaired at some point in the past. For some people that induces a sharp intake of breath, to me it doesn’t really cause any major concerns. Most bikes that fall off their stand can often end up getting a Cat C grouping once repairs have been carried out.

At £13,000 the seller points out that the only other SPS for sale at the moment is a good few grand more, and with this being such a sought after and rare model, if you really want a well loved SPS you’re going to be hard pushed to find another one to look at, let alone buy. 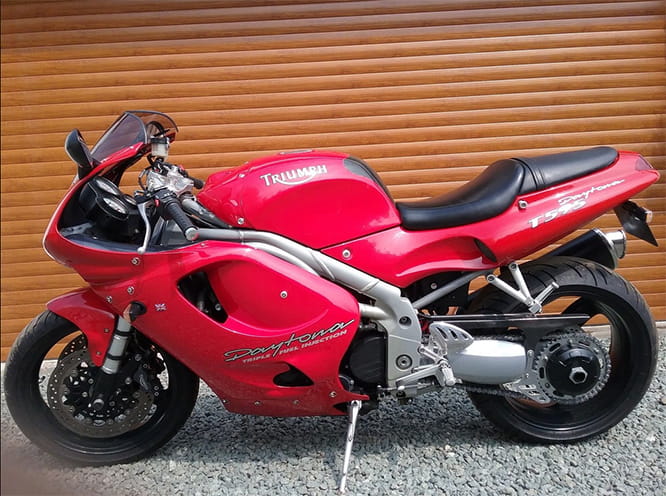 It’s hard to believe the hype that surrounded this bike before it was launched. It was the first serious sports bike to wear the Triumph badge. The media whipped us into a frenzy and some people paid a premium on its list price to get their hands on the three cylinder machine from Hinckley. They must have been gutted as the T595 was never a FireBlade beater. On horsepower though the pair were evenly matched, both poking out around 107bhp if 90s dyno tests are to be taken seriously. The Triumph lost out in the weight department, despite having a cylinder less and a plastic fuel tank it was still around 20 kilos heavier than the CBR900R.

This example we’ve found is typical of your average T595 these days. They are cheap and plentiful. This one is up for £1,500, which is a lot of bike for your buck. The red ones also look better than the more common gold coloured ones, another bonus. Its had loads of fuss too, tyres, chain and brakes are all fresh, it’s even had oil and filters. On the downside it is carrying quite a few miles on its dials, and although 55,000 miles isn’t the end of the world, there will be plenty of lower mileage bikes out there.

The T595 Daytona is very underated. Forget about comparing it to the FireBlade and take it on face value. The bike is still distinctive to look at, but more importantly it sounds gorgeous. Those three pot Hinckley engines sound so good, and at £1,500 you aren’t ever going to loose too much cash if you decided you really wanted a Blade anyway. 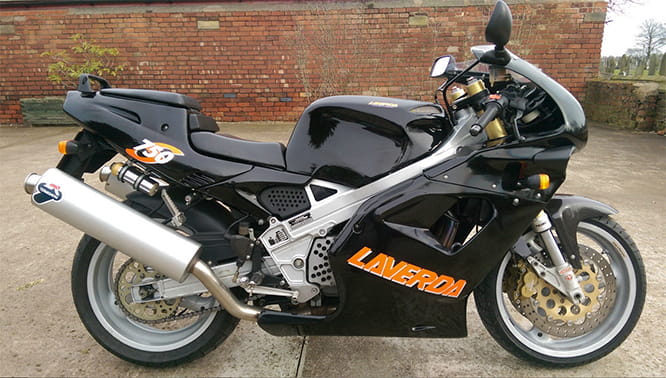 Raiding the parts bin is something all manufacturers do from time to time, and likewise they also raid the family silver. Laverda is one of those marques that has had good times and dire ones. Their hey day was the 70s. Big brutal triple cylinder bikes like the 3C, Jota and Mirage stole the headlines, whilst the 750 and 500 twin offerings sold in steady numbers. At the heart of this sports bike is an engine that was born in the 70s. Sure Laverda reworked the top end and slung water cooling on it, but the bottom end  is pretty much a 500 twin that was used on the Montjuic and other models. Laverda armed the 750S with plenty of Italian brands. Brembo dealt with the brakes, Paoli handled the suspension and Termignoni dealt with the exhausts, so on paper at least it looks delicious. The styling of the 750S isn’t it’s strongest feature, there was also a half faired offering in the range. The fuel injection was crude and top whack was an impressive 140mph, not bad for a mismatch of parts.

Reliability was always going to be an issue, and that is where the Lav dream went down the toilet. Issues with oil pressure didn’t help. This bike looks pretty straight, but the advert quickly draws your eyes to negatives, and with details like the tacho mostly works, gives you a clear indication of how life with a Laverda 750S might be. There are so many better bikes out there, and with prices no longer being cheap either, there’s no real logic why you would buy one of these bikes.