This weeks selection comes in the shape of 500cc Grand Prix-inspired road bikes: 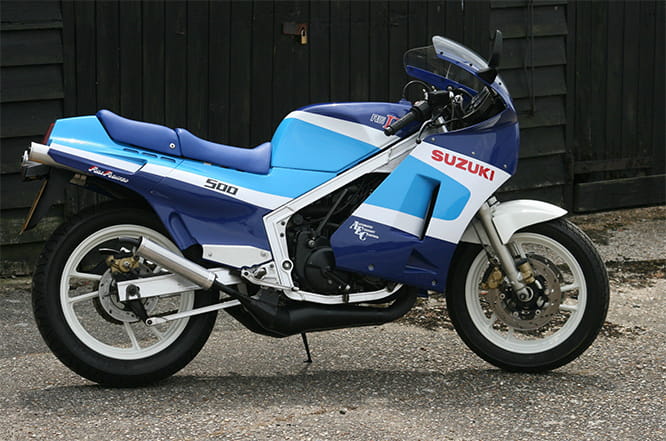 Bikes with a name often sound cool and there’s no cooler name than ‘The Gamma’. The bad boy two stroke from the 80s hasn’t ever really gone out of fashion, and now three decades later the combination of the demise of the two stroke, thanks to the emission police, means anyone experiencing a biking midlife crisis will have to dig deep to get their 500GP bike for the road fix. The RG500 is the top of the heap, king of the hill, the number one in this round up.

Looking closer we can see why. The basic engine design mirrors the design of the Suzuki RG500 race bikes. The engine is a square four design with the rear barrels stacked a tad higher.

The carbs sit on the side of the motor and feed fuel, air and two stroke into the bowels of the motor via the disc valves. The engine is the cherry on the cake. The chassis isn’t quite so capable, which goes some way to explain why so many of these bikes have been raped and pillaged for their power plants over the years. Even now people shoved the compact square four inside all manner of things, the common conversions is to use an Aprilia RS250 or Suzuki RGV frame. Up until recently you could pick a decent stock RG500 up for around £5,000 but those days have gone, and asking prices for good standard machines have more than doubled now. This bike isn’t standard, but it is very typical of the usual mods that a RG500 might have received over the years, after all not many people ever left a two stroke standard, which is another reason why stockers demand a premium. The alterations on this bike are all performance related enhancements. The biggest deviation being the 570cc big bore kit and stage three tune. The most visual are the Swarbrick expansion chambers, which sound gorgeous I should imagine. The Gamma is an icon, and if you’ve never owned one you’ve probably at some point wanted one?

If you want a stockish one, you are going to be hard pushed to find a selection to gawp at, it’s fun looking though isn’t it? 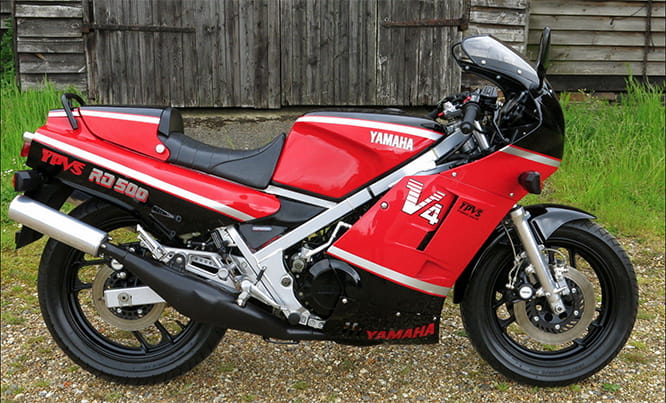 Yamaha created this class with this bike. A generation of head bangers were brought up on the RD brand.

The 500LC was totally aced by the Suzuki RG500 that arrived a year later, it’s almost like Suzuki sat back and watched? King Kenny Roberts was wheeled out to add to the bikes drool factor, but the bike never really lived up to the dream the Yamaha suits teased us with.

It wasn’t a terrible bike, far from it, but it was always second fiddle to the Suzuki. Like the RG500, the RDs engine is popular with hybrid builders and over the years the V4 two stroke motor has been shoehorned into TZR250 frames and there’s even one in Kent powering  a TDR250.

Unlike the RG it doesn’t respond so well to tuning. There’s probably more original 500LCs out there than there are RG500s, which is a good thing if you want to own one. This bike looks gorgeous, it’s in the rarer black and red paint strip, which looks very handsome. Lots of 500LCs appear with large price tags, but I watched a decent 500LC sell on an eBay auction for almost half of the sticker price of this example. The bridesmaid 500 suddenly makes lots of sense all these years later, and for a generation it is still the ultimate RD. 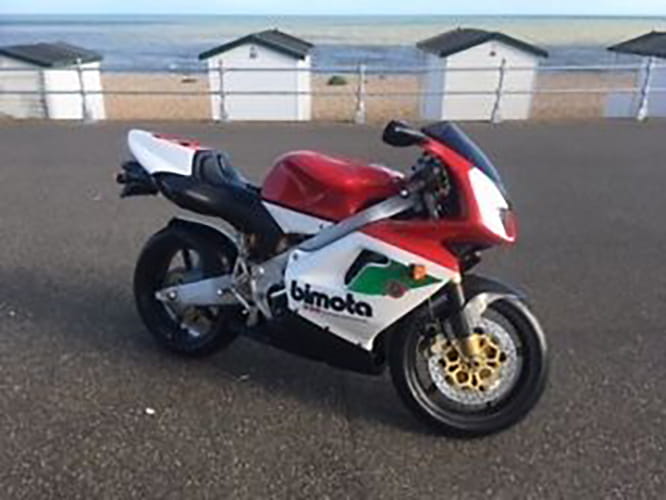 For years the Italian company Bimota had been taking the best engines from the worst handling production bikes and creating drop dead creations to house them in. Their chassis kits were the pinnacle in a sea of after market chassis kits in the  70s, 80s and 90s.

Having sussed how to cure the ills of other manufacturers bikes Bimota decided to build its own engine, a v twin 500 two stroke. The rest is history. The VDue arrived in 1997 and from the off it was on a hiding to nothing. Reports of owners returning their VDues for a full refund did little to help shift the remaining bikes.

On paper it looked too good to be true. An emission friendly twin that delivered 110bhp. On the road the power was pretty unusable, with peak power concentrated to a very narrow power band.

Reliability is what banged the nails in the VDue coffin, the project was not only sunk but also a laughing stock.

The styling was one thing that didn’t get too much oxygen, but it never looked right. The exhausts never looked at home with the rest of the bike. The chassis was the business, but remained unpunished. This VDue isn’t stock, the feather light weight is further parred down with the addition of carbon fibre goodies, the rims are BST items and there’s even a carbon fibre clutch basket. There’s 499 miles on the clocks, meaning it’s still practically new. The Bimota brand attracts collectors, so this bikes future may well lay in the hands of another buyer who wants to add the Italian stallion to an already impressive collection? At £21,995 it’s not going to end up in the wrong hands.