The king of motorcycle wheeling and dealing, Scott Redmond, is the man responsible for your twice-weekly fix of second-hand bike bargains on the web. With almost 30 years’ experience of buying, breaking and selling, he’s handled more motorcycles than you’ve had hot dinners, and shares his secrets with BikeSocial.

“Spring is finally in the air,” says Scottie. “Time is running out if you need to find a cheap bike for the better weather, so armed with our virtual £2,000, this week we look at three very different Honda CBR models.” 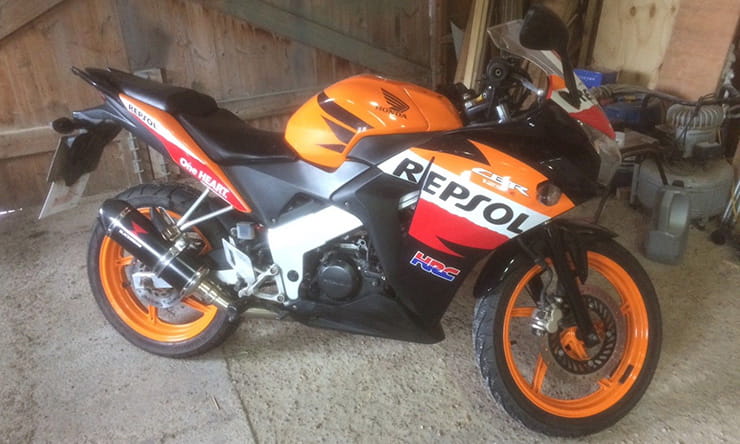 It might not be the most authentic race replica on the 125 market, but that’s probably one its biggest attractions to learners who might think that they need a more faithful MotoGP 125, when what they really require is a bike to learn their road craft on, then ultimately move on to something bigger once tests have been passed.

The CBR125 is an extremely practical machine, which explains why it’s been such a sales success. Most owners only keep a 125 for as long as they need to, so don’t be too surprised if any potential purchase carries a large number against the previous keepers section on the V5. Obviously never consider buying one when the V5 is alleged to be lost.

This pretty CBR125 sports a Repsol paint job, and it certainly gives the little bike a bigger appearance. Always check if any fancy paint job a manufacturer’s option, and not the result of some misfortune.

This 2012 bike hides its years pretty well, and other than the Black Widow exhaust it’s pretty much stock.

There are fresh tyres fitted and a long MOT; mileage might seem high at 29,000 miles, but that breaks down to less than 5,000 per year when you divide it by its age.

Anorak Fact: There are tons of used CBR125 parts on the market, as bikes either end up in the breakers’ yards after accidents or a result of poor maintenance; this means everything from forks, fairings and engines can usually be found easily enough. 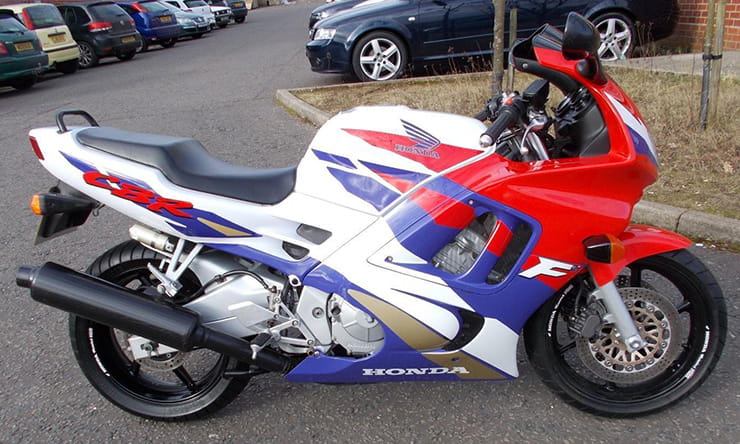 They sold by the boat load in their day and over two decades later there’s still a healthy stock of used CBR600s on the market. With each year that passes the supply of exceptional examples gets less and less. This 1995 find is a real win-win.

It’s in one of the best standard paint schemes, and it’s only covered 16,900 miles from new. With an asking price of £1,795 it represents great value for money. Our seller even points out that in two months’ time this bike would be advertised for much more! Would it sell for an inflated price just because the sun is out and the biking season is well underway? Yes, it probably would if it’s as good as the advert says it is.

The CBR is ready to rumble, it’s just been serviced and it’s even fitted with new tyres, result.

If this minty CBR600 is still running its original exhaust headers they might need a good prod to make sure they are solid; they lasted fairly well, especially when compared to other 600s from this era, but nothing lasts forever. New replacements can be found for around £200, but once armed with some new downpipes the next thing is to cross your fingers and hope all eight manifold studs come out with no issues, it’s not uncommon for one or two to shear off, which leaves you with the headache of removing them from the cylinder head. Hopefully these headers are in tip top condition.

BikeSocial has had great experience with Motad stainless steel headers; sadly the company has closed, but these are worth seeking out second-hand, as they don’t upset the fuelling like some cheaper aftermarket ones can – look for the connecting pipes between the downpipes that the OE and Motad versions have.

Anorak Fact: Many of these bikes get used on track, so it’s always worth taking a good look behind all of that bodywork to see if there are any scars lurking. 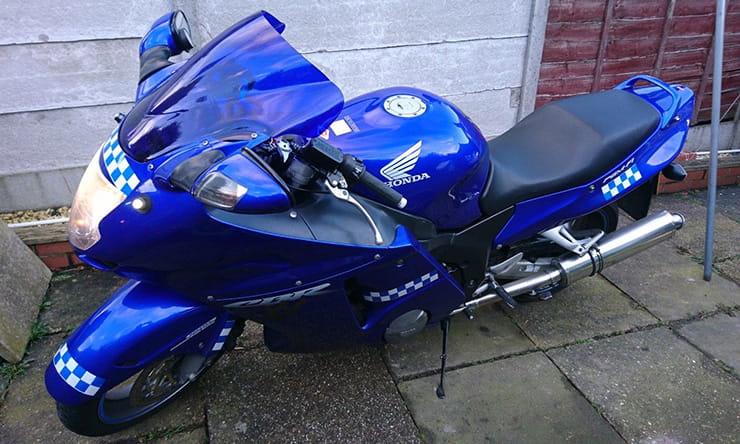 If you’re the kind of rider that likes to travel fast, there’s no better bike for going warp speed on a budget; the Honda Blackbird can often be found for around £2,000 or less. The once-king of speed appeals to many types of owners, so they rarely sit advertised too long before being snapped up.

Sitting at bang on 2K is this 2004 model; it’s a fuel injected version, which according to those who prefer the earlier carb-fed Blackbird isn’t the model to go for. The interesting thing is that owners of the injected version say exactly the same about the carb’d models…

This 14-year-old CBR is dripping in extras – parts like the hugger, heated grips and handlebar risers are worthy bolt-ons, though the rim tape and blue screen might detract not just your eye, but also from your offer. On the plus side, they are easy to remove.

Big bikes are good for big miles, and there are 54,000 miles on this one. Sounds a lot? It’s naff all – if it was an 1100cc car the seller would be boastful of such low mileage.

The engine might be good for the miles but this old Bird is due some investment; the discs are nearing the end of their life, as are the tyres. That’s an easy £400 you’d need to splash out if you like buying new parts.

Anorak Fact: The Blackbird benefits from the use of bar risers… some owners even fit VFR bars to make the bike more comfy.