(e)BayWatch | Shockers to barter for…

“Earlier in the week we suggested half a dozen modifications that would detract value from a used motorcycle,” says Scottie. “This trio all have various reasons why you might want to haggle hard…” 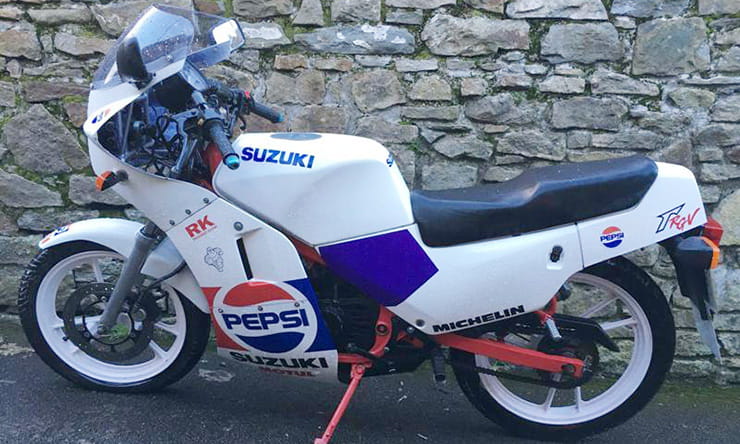 A lovely original example, our sellers suggests. Unless they’ve uploaded the wrong photographs, I feel I need to take them to task.

One of the biggest ways to knock value off your motorcycle is to repaint it, especially if it’s in a non-standard condition. Pepsi may well have been the choice of a generation, but that generation of yobbos is now pushing 50 years of age. Perfectly placed to be making a feel-good purchase to make them feel like a teenager again. Prices for 1980s two strokes are forever going up, the 125cc two stroke scene is a very active marketplace.

When they had the rattle cans out they didn’t just stop at the fairing, tank and seat panels. The frame and swingarm arm are finished in a rather fetching shade of red… shame though because it should be painted silver.

An asking price is just that, a starting point for opening negotiations and driving the price down to a figure that a buyer would actually pay for it. The opening price for this mini Gamma is £1,695, maybe the ‘1’ crept in there by accident….?

Anorak Fact: Stan Stephens could sell you a small piece of metal to pop inside the AEC port – the power valve blank would give you a stronger power band. 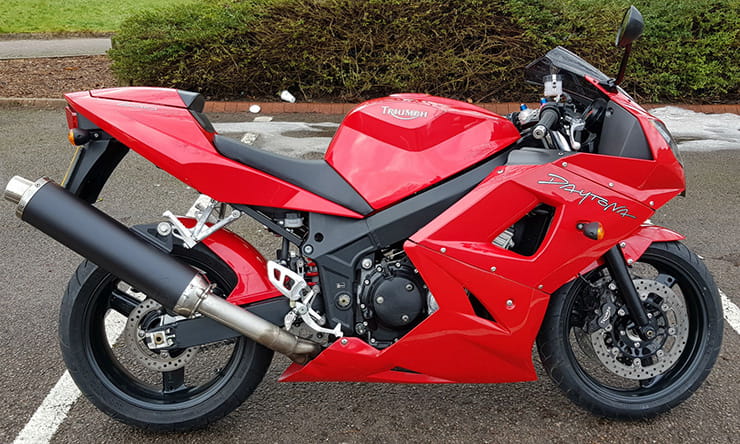 Nothing damages a motorcycle’s resale value more than its details being on the HPI register. Many bikes end up on the hit list every year, and some of them will have been in accidents so an obvious contender to be written off. Others might have only fallen off their side stand, but because a man in a suit makes an assessment that it’s beyond economical repair its fate is sealed.

Prices for genuine parts have generally been expensive, though surely not on purpose?! Especially those parts that touch down and absorb any mishaps. Surely!

Mirrors, bars, levers and exhaust silencers can be pricey items if you buy them from a manufacturer, yet these are often the very parts that people chuck away and fit aftermarket versions; these pattern parts can offer excellent value for money.

This Triumph Daytona lasted just a year before it ended up with a Cat C marker on its head. For this 2,188 mile old machine the seller is after £2,799; that’s around a grand behind bikes of the same year with tons more miles, but they aren’t registered on the HPI list.

Anorak Fact: Not all sellers declare that a bike is recorded as damaged, so always check the V5 document – it will be on there! 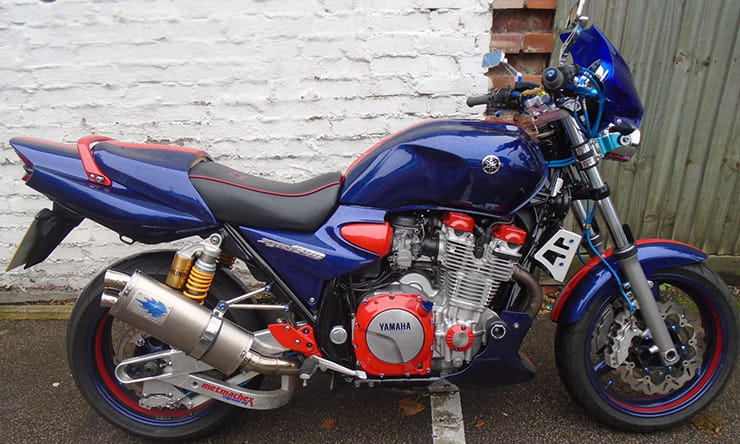 Of all the used bikes up for sale currently on eBay, this Yamaha XJR1300 screamed out at me when looking for suitable machines to help me write this week’s piece. Beauty is in the eye of the beholder, and the creator of this bespoke XJR1300 no doubt believes it looks a million dollars. But I can’t help to think it all looks a bit two bob.

Less is always more in my world, so I’m not the target buyer for a 13-year-old retro ride that’s dripping in ‘extras’. The funny thing is there’s actually some top notch kit on the bike. Those Billet six-pot calipers are not cheap to buy, but what’s so wrong with the iconic Yamaha blue-spot calipers?

It’s the detailing that I notice first… the bright red rocker cover, blue screen and chromed twin spot lamps, but the Metmachex swinging arm would’ve been top of my own shopping list back the ’90s.

The metal flake paint is just one customised feature too far for me I’m afraid. At £2,995 it’s a lot of bike for your money, and prices for these big air-cooled retros have always been steady… if anything they are creeping up year-on-year. I’d hold out for a more stock one that will be easier to sell on once you’ve had your fill of it.