Café Racers used to be something you built - souping up your humdrum work bike for evenings and weekends tearing about with your mates. Now they're (mostly) something you buy - a sportier take on a manufacturer's more everyday models, with better handling and braking, a bit of retro styling, but usually no more performance. Some are more authentic than others, of course - after all, if you've got a heritage like Triumph, for example, you've got a head start... Here's a selection of the best ones we've seen this week – all low mileage and immaculate. After all, unless you specifically want a brand new bike, it makes a lot of sense to let someone else take the initial depreciation hit and leave you to spend the saving on fuel and tyres. 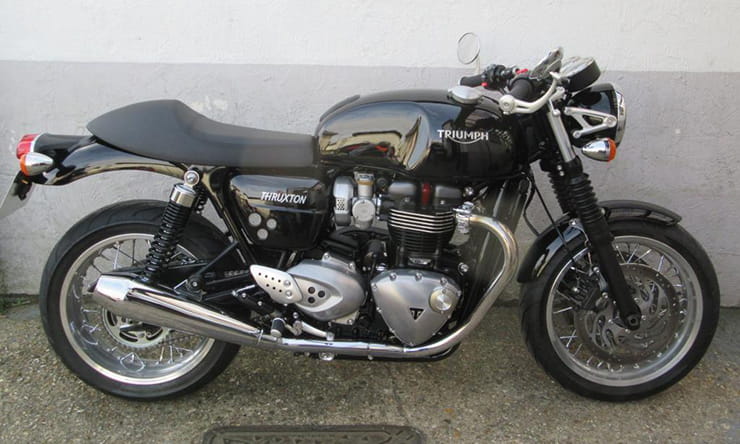 The earlier Thruxton 865 had a genuinely old-fashioned feel - long, low, and a bit slow – and looked 100% authentic. The 2016-on Thruxton 1200 makes no attempt to go and handle like an original 60s café racer - it's a thoroughly modern (right down to switchable riding modes, ride-by-wire engine management and traction control), sweet-handling roadster that just happens to have retro styling. The extra capacity gives it enough grunt to be genuinely quick on the road, and the handling and ground clearance are easily good enough for a track day. The posher R version, with Öhlins shocks, Showa Big Piston forks and Brembo radial brakes, is the best dynamically - that posh suspension really makes a difference - but the gold forks and yellow shock springs aren't everyone's cup of tea. This base model's monochrome colour scheme suits the bike's lines perfectly. The 1200 hasn't been around long enough for any major problems to show up, so you're down to checking the basics – overall condition, looking for evidence of repaired crash damage etc. This one, for sale in Dorset, isn't even properly run-in yet, with just 1200 miles showing. It looks to be as close to new condition as you'll find, and at £2200 under the RRP of a new Thruxton, represents a useful saving. 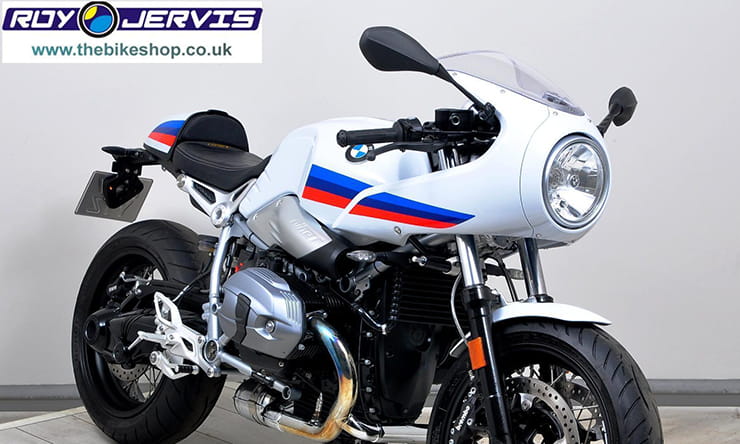 The R nine T has been a real hit for BMW, using the air/oil cooled 1170cc engine from the pre-2014 R1200GS, the drivetrain from the older R1200R and the forks (much simplified) from the S1000RR superbike. This racer version has even more basic forks and brakes, but they're still up to the job, and the styling is pure café racer. So is the riding position though, so you really need to test ride one of these to see if you can fold yourself up into the right shape to ride it... Otherwise you're getting decent handling, more than adequate ground clearance and a reliable motor. There are issues with finish on all modern BMWs, but this example, for sale in Derbyshire, is so close to new - it has just 400 miles on and is immaculate - that  so long as you invest the time and effort to keep it shiny, it'll be fine for several years yet. It will be a significant investment though - this is the Racer S version, so it gets LED indicators, heated, a chrome exhaust and spoked wheels, and those wheels in particular are a proper pain to keep clean. You also need to keep a careful eye on spoke tension. Because it's so low mileage, it's effectively still running in - these engines several thousand miles to really feel properly bedded-in and free-revving. The other potential problem with the low mileage is the battery - the standard item is small and a bit marginal for the job. It may have suffered from inactivity, so if there's the slightest hint of sluggish starting, we'd want to bin it and get a high quality replacement. 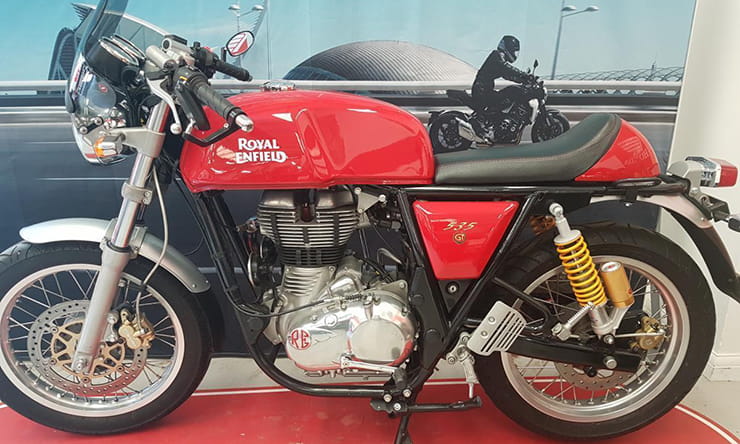 This really is about as retro as it gets, although it's daringly modern in Enfield terms! The single cylinder motor gives it an authentic 60s feel, although a claimed 29bhp isn't going to be rippling any tarmac any time soon, especially as despite looking small and delicate, it weighs more than a modern litre-class superbike. But you can plobble along at a reasonable rate thanks to a decent, thumpy torque curve that means you don't need to trouble the five-speed  gearbox too much. Better for sunny sundays B-road bimbles rather than thrashing down A-roads though. Handling's fine, suspension's a bit basic, but it's all part of the charm. If neglected, these bikes tend to look tatty, quickly, but this one looks to have been cared-for during its 3400 miles. It's for sale at a Honda dealer - South Coast Honda in Chichester - so we assume it's a trade-in. It's got an aftermarket screen, rearsets, mirrors and handlebars, as well as a loud pipe. We'd hope the original parts are also offered with it. More importantly, we'd be checking that all the electrics work fine, as they are known for problems, often made worse if the battery's a bit weak. They're a bit prone to fouling spark plugs too, which causes annoying misfires - fitting a posh Iridium version helps a lot. 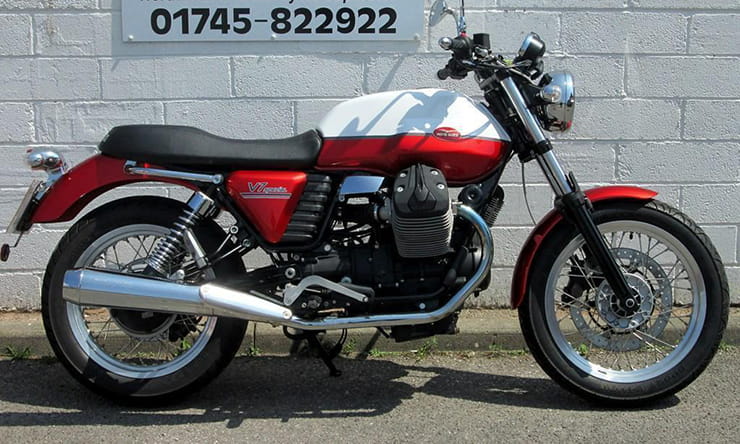 Plenty of proper heritage here - more than fifty years' worth. The V7's design goes right back to the very first Guzzi 90° V-twin of 1967, although this modern (!) version is based on the smaller block engine from the V50 and V65 rather than the big block of the original V7. These days of course, it's fuel injected, but that's about the only concession to high tech. The riding experience is authentic enough - basic suspension, not a lot of power, but it's susprisingly eager to rev if you want it to. There are various versions but this V7 Special is the most retro-looking, especially with the two-tone paint. It's low miles - just over 3000 in five years, and looks nice and clean. Earlier V7s had a reputation for burning oil, especially if they hadn't been run-in properly, but that seems to have been addressed on the 2013-on models. These engines only carry a couple of litres of oil though, so you really need to keep an eye on levels - you can also buy an accessory tank extension which increases the capacity. Either way, we'd want to see a properly cold start - a slight puff of smoke is fine, but anything heavy or which doesn't go away immediately, be wary. Some owners have had problems with stalling and rough idling which can be software related but equally could be a faulty injector. And the gearbox is never slick, but shouldn't be really clunky or stiff – if it is, don't despair as it's probably either poor clutch adjustment, or a poorly routed and trapped cable. Otherwise, on higher mileage bikes we'd be looking at the finish, especially on the wire spoke wheels, and considering a voltage regulator upgrade, but on this low mileage example that shouldn't be a problem. 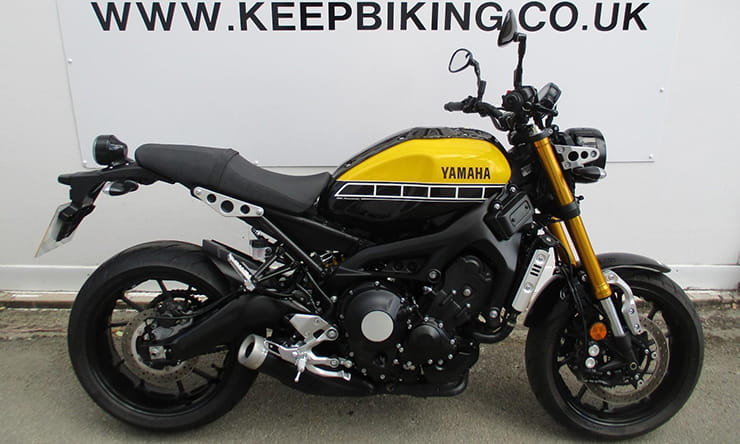 Cheating a bit really, as the only 'heritage' bit of the XSR is the paintwork. But when it's in homage to the original Yamaha speedblock race bike design, and it's slapped on a bike that's as much fun as the XSR, that's fine by us. The XSR is really just an MT-09 with a vaguely retro styling job, and the heart of it is that fantastic triple engine - growly and grunty, but with a nicely demented howl at the top end as well. The main things to look for are overall condition - the finish on some parts isn't as good as it might be - and niggly electrical faults. The combined kill switch/starter button is a frequent culprit - it gets sticky and ends up keeping the starter energised even when the engine's already started. You need to actively flick the switch back to the middle position after starting, rather than relying on the return spring. There can also be problems with water ingress to loom connectors - especially after over-vigorous jet-washing or lots of wet weather use. We'd be surprised if this very low mileage example had an problems in that direction though - it's only done 1200-odd miles. Fuelling is better on these than the original MT, but they still run too lean low down to comply with emissions, and that can make the drive a bit snatchy. An ECU reflash helps, and is especially important if the exhaust's been swapped for an aftermarket one.