“When Suzuki GB fully restored a 1985 GSX-R750F at Motorcycle Live, it confirmed that the Slabby is now a recognised modern classic,” says Scott. “This week we delve into the Good, Bad & Ugly of oil-cooled GSX-R750s. We’ll also be riding that freshly restored Suzuki at the Isle of Man this weekend…” 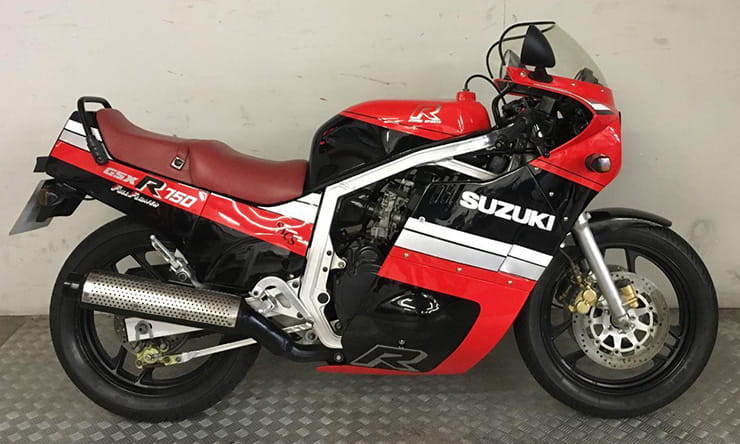 The impact that this model had on the motorcycle market in 1985 was immense; it managed to combine a 100bhp engine with a machine that weighed 176kg when dry. If that wasn’t enough to get your juices flowing, its styling left you with no doubts as to what Suzuki was thinking – it was the first in a very long production line of GSX-R750s.

Fast forward over thirty years and trying to find any Slabby 750 is a bit of a mission – locating one that’s original gets harder with every year that passes. It’s gone full circle; after years of being out in the cold, it’s very much back in fashion. Nostalgia is one reason, racing is the other. The Classic Racing Motorcycle Club runs classes where you can race these classic bikes, and there are also endurance classes and the Classic TT. This helps to explain how prices for any surviving bikes have been creeping up, as it wasn’t too long ago that you could find scruffy bikes for well below £1,000.

The majority of original bikes on the market these days started their life in other countries – importers respond to market trends and find bikes from far afield to wash up on our shores. This F model is a perfect example of this. It’s a very standard machine, right down to the standard exhaust that’s even still got its cheese grater heat shield intact. The black and red paintwork looks to be in good shape, though the blue and white-finished bikes carry a small price premium. Priced at £4,495 it’s no bargain, but it is a pretty sound buy.

While the sales post headline says 1991, this is either a mistake, or it’s the date on the V5 from when it was first registered in the UK.

Anorak Fact: There was a Limited Edition Slabby, this model had a single seat, forks and wheels from the GSX-R1100H and a dry clutch. 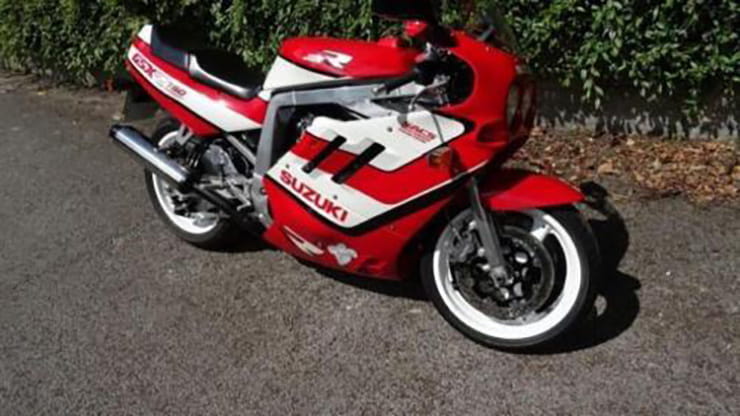 The second incarnation of the GSX-R750 saw very little of the model before living on. Power went up but sadly so did the weight… the GSX-R750 had gone all lardy. The new frame, revised rear suspension design, fatter forks and three spoke wheels added 18kg to the new bike’s vitals. The engine was reworked to be a short-stroke motor, which allowed it to rev higher. The carbs were now CV items, instead of the flat-slides on the earlier bikes.

The J model arrived first, but that gave way to this, the K version. It was pretty much the same bike – Suzuki added 5mm to the swing arm to help keep it stable, and the belly pan was slightly narrower. The most obvious visual difference was the chromed sleeves on the four-into-two exhaust.

Those who preferred their GSX-R750s oil-cooled love this model, and it’s easy to see why. Aside from the fat stats, the bike looks much more modern than the Slabby that it replaced.

This bike is a real find – it’s dead original and – amazingly for a 26-year-old bike – it’s only had three owners. It’s even got its handbooks and some service history.

At £4,500 it’s not going to be an impulse buy, but when you research used parts prices, the cost of a professional repaint etc, if you’re in the market for a Slingshot 750, it suddenly looks great value for money. 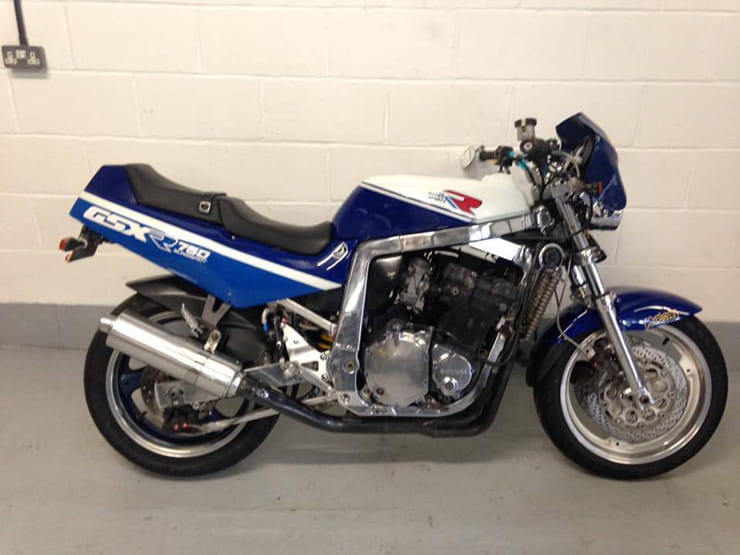 This is how many GSX-R750s have ended up; devoid of their original fairing and dripping in non-standard parts. Some people spend thousands of pounds fiddling with a bike that Suzuki invested stacks of yen to develop, and end up with something that resembles an explosion in a bike breaker’s. Others do it on a budget; either way the end result is often of very narrow appeal.

The GSX-R750 frame is alloy – it actually looks great when it’s mirror polished, but if you get slack with the Solvol it’ll soon lose its shine. Most street fighter builds start after an accident, so it’s always worth looking for signs of this, and evidence of parts that have been bent back straight.

This bike comes with some service history that backs up the 15,000 miles recorded, so chances are the engine should be pretty healthy. The looks of the bike will either excite you or leave you feeling cold. There’s no reason why you couldn’t find a second-hand fairing, some original bars and return it to a standard looking bike – that’s what I’d be inclined to do if it was mine. At £1,695 it’s a cheap way into oil-cooled GSX-R750 ownership.

Anorak Fact: The last oil-cooled model was the GSX-R750M. It’s a rare find these days.