Need something to get you through a longer commute in all weathers, with enough power to take on dual cabbage-way traffic, enough bodywork to keep most of the rain off, and enough room to fit a week's shopping under the seat? If you're unfortunate enough to tick all those boxes, one of these might well be for you. Yes, we know - they're scooters, not really motorbikes. But there's a reason why they've become more and more popular since the first wave were looked on with disdain - they work brilliantly.

Add in low running costs and surprisingly good resale values, and they can make a lot of sense – let one of these sort out your weekday needs and save your 'proper' bike for weekend fun. 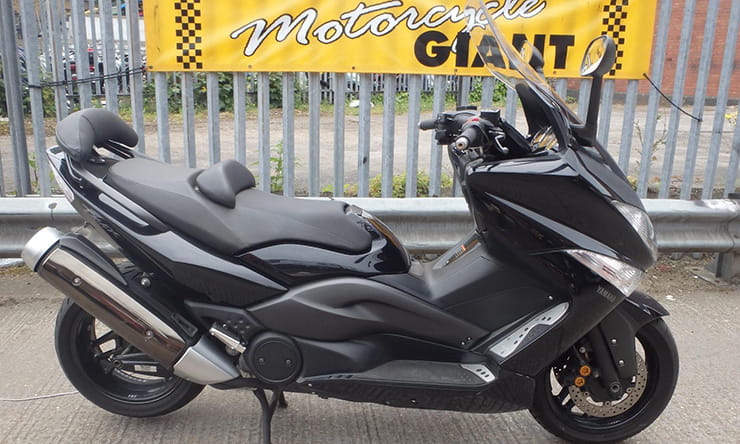 Introduced to widespread bewilderment in 2000, the TMax was the first big scooter designed with performance in mind. The water-cooled parallel twin engine sat in the middle of the frame rather than swinging with the rear wheel as on a conventional scooter, which gives the Tmax far better weight distribution, and more bike-like handling than you might expect - these things can really hustle in the bends. The downside is that the layout eats into storage space, and you have chain drive at the rear instead of a fuss-free belt on all but the latest versions. This is a 2008 model, so it has fuel injection instead of the original carbs, a bigger front wheel and beefier forks as well as twin front discs and seriously powerful brakes. It also has a bigger fuel tank than the originals (up to 15 litres). If you get a test ride, try and make it a long one - this generation of TMax was known for fuel pump problems, which often only manifest after half an hour or so of riding. Also make sure you get to hear/see it started form cold - beware of undue smoke which probably means it's regularly been thrashed from cold. And listen out for top end rattles - not unknown for the camchain tensioner to get baggy and rattly, although less commmon on this generation than earlier versions. Apart from that they're very reliable - we've seen them with 60,000 miles on the clocks, still going strong. 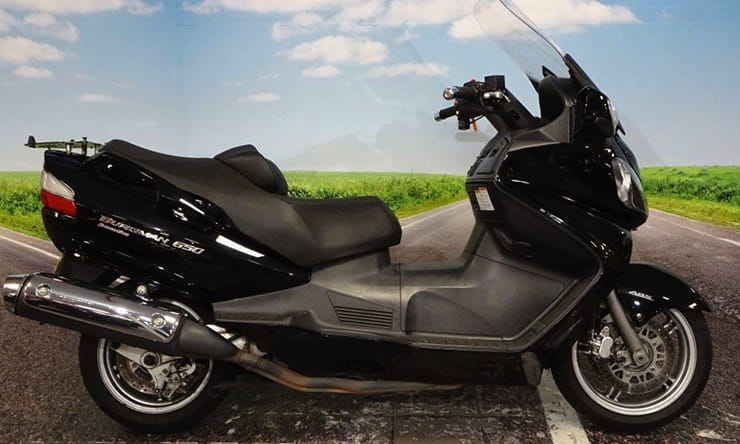 You want a big scooter? It doesn't get much bigger than this. Weighing in at a mightly 240kg, and with a 54bhp, 638cc parallel twin motor, this is no lightweight town commuter. In fact it's probably more at home on a two-up tour of Europe than a ten-minute commute into the city, especially as there's so much room under the seat that you might get away with sleeping in there at a pinch. Comfort is excellent, and ride quality is good so long as you're not trying to hustle fast along a bumpy road, in which case you'll overwhelm the soft suspension. You'll find the Burgman a bit of a heavy old beast to manoeuvre about at slow speed, and pushing it backwards is difficult because of transmission drag (2013-on models got a revised transmission for this very reason). The engines are legendarily reliable (the prototype was allegedly half a Hayabusa engine...) and with 20,000 miles on the clock, this 2009 example has loads of life left in it. It has a full service history and has just had an oil and filter change. We'd be looking carefully underneath to make sure it's as shiny down there as it is on the outside - these scoots are known for corroding away under the skin. Otherwise look out for untowards noises from the transmission, smoke from cold start-up, and a sluggish battery. Make sure the switchable transmission modes (operated from the left handlebar) all work properly as well. Switchable transmission? Yep - you get to choose whether you want simple twist and go (with the option of a little more of the lattter in 'Power' mode) or push-button selection of six pre-set transmission ratios - effectively a manual gearbox. 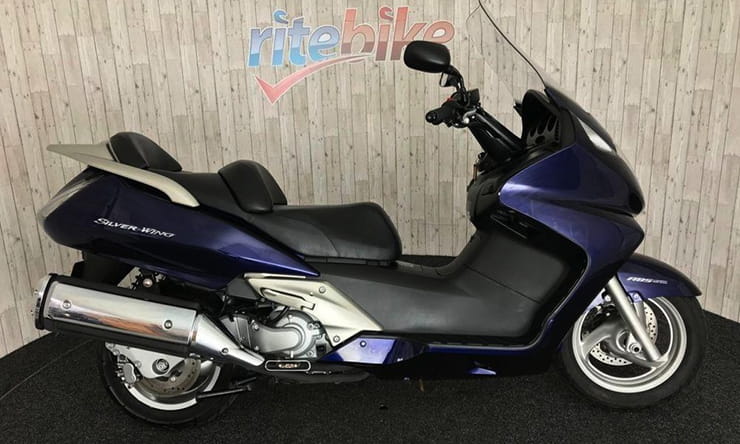 The Silverwing has barely changed since it was introduce in 2001, but don't let that put you off, because it's still a seriously practical package. The 582cc parallel twin motor is peppy enough to top the ton if necessary, and incredibly smooth, and the 'Wing is very stable thanks to those relatively large wheels. The seat's low enough for pretty much anyone to get both feet on the floor, and although the bodywork's fairly narrow (good for filtering), once moving there's loads of room to tuck yourself well out of the airstream. Two big, comfy seats make it a good choice for two-up commuting, although the passenger's a bit exposed compared to the rider. There's plenty of storage - the underseat boot will swallow two full-face lids, and there are two pouches in the front fairing as well, one of them lockable. This 2015 version has ABS, which is well worth having, and it's also got heated grips to make life a bit more pleasant in winter. It was last serviced a couple of years ago so we'd budget for a full service for peace of mind. We'd also take the bulb out of the underseat courtesy light - if the seat doesn't latch properly the light stays on and flattens the battery. There's also an issue with older 'Wings where the wheels corrode and the tyres can't seal properly so they gradually go flat, but on this recent model that shouldn't be a worry. Otherwise they're boringly reliable - exactly what you want from a commuter. 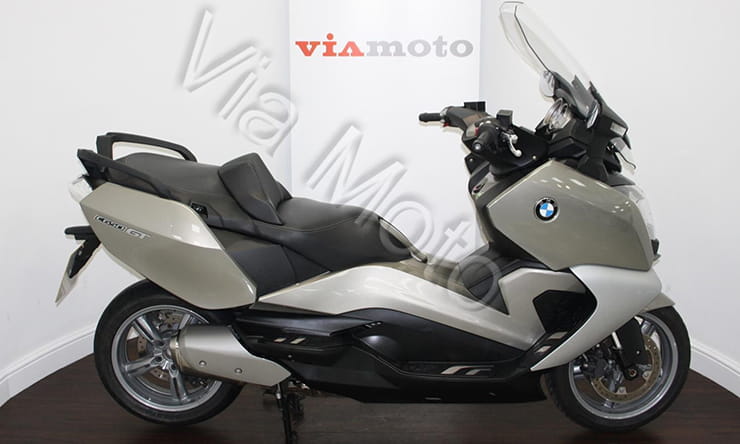 Reliable German engineering - just what you want for reliability. Well, actually the 59bhp, 647cc parallel twin engine is built by Kymco in Taiwan, but the good news is it's a proven unit with no real vices, although the twist and go transmission is daftly complicated, using a hybrid arrangement of variable belt transmission and (enclosed) chain final drive. The styling on this GT version is recognisably drawn from BMW's super-successful R1200RT and it's very protective. Handling is very sure-footed - you can push it like you would a motorbike, with none of the vagueness associated with most big scooters. Luggage capacity is ok - you might fit a pair of full face lids under the seat, but only if they have relatively small shells. The GT Highline was the highest spec available at launch and cost well over ten grand (several grand more than most of the competition), so less than half that is a relative bargain for such a clean, low mileage example, with MoT til next summer and a dealer service history. We'd want to get a test ride, and check that the engine isn't inclined to stall as you throttle off – early models had problems with this which were mostly cured with a software update, but there's also the possibility of air bypass lines becoming trapped after servicing work. We'd also check that all switches etc work as they should and that the dashboard functions fully - there have been some problems in both areas. Fuel flaps break, the adjustable screen stops working and the fuel gauge can refuse to register more than half full, so all worth checking. 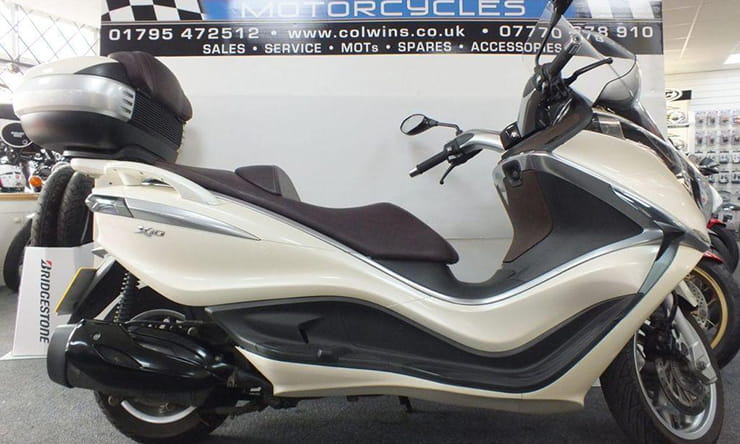 It's fair to say Piaggio know a bit about big scooters, and they've applied it all here. It's at its best away from town, where its long wheelbase and imposing size and soft suspension are advantages rather than problems. So a longer motorway commute is probably ideal. In town it's a bit ponderous, and hard to muscle in and out of parking spaces - no shuffling backwards uphill, you'll need to get off and push – but no more than most of its rivals. The motor is actually only 330cc (it's the well-proven motor from the older Beverly) but don't worry - it's pretty impressive all the same, even though the all-up weight is pushing 200kg. It'll accelerate pretty well from rest, as well as cruising easily at motorway speeds and going on to a top end of about 95mph. 75mpg is easily achievable, which gives you a range of well over 200 miles, and they'll be covered in reasonable comfort, with good weather protections and comfy seat. There's an 'ECO' button on the right handlebar which changes ECU maps to save fuel even further, but it doesn't actually seem to make much difference... Underneath the seat you'll find a generous 50+ litres of storage space which will just about take two full face helmets, and there are more compartments in the front bodywork as well. ABS and traction control are standard, which is nice - you might think the later is superfluous on a 33bhp scooter, but on slippery urban roads it can be a godsend. It's well built and there are few major problems to look out for, although we'd be checking that the recall for rear shocks was carried out, and making sure the battery is in good condition. It's worth upgrading the brake pads to something a bit sportier - as standard the brakes are a bit wooden. Don't trust the parking brake, by the way - they're known for being unreliable. The X10 is a bit complex to work on – not so much mechanically, as just getting access to the mechanical bits under all that swoopy bodywork – so we'd want to insist on a full service before riding away.