Pick of the Ads: Adventure bikes

This week’s Good, Bad and Ugly is all about adventure bikes.

“It’s been a busy week here at BikeSocial with the launch of not just one revised adventure bike, but two!” Said Scott. “What better time to surf the net and look at some older Triumph Tiger and Honda Africa Twin models for sale today on eBay.” 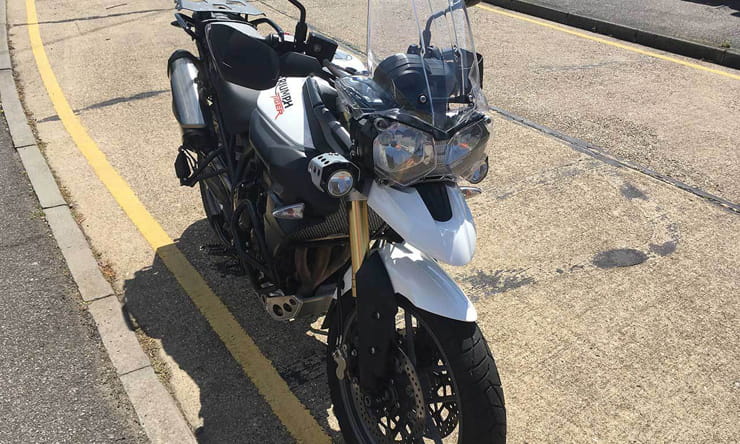 The older bikes become the less desirable they are to those who crave the latest offerings, some owners have stepped off the new bike merry go round and instead choose to stick with what they’ve got.

It’s a notion that makes lots of sense.

This six-year-old Triumph Tiger 800 is a perfect example of modifying your bike with products that will add pleasure to your riding. The upshot though is when you do eventually come to sell, it doesn’t always add value to your bike. Personally I’d remove the goodies and sell them on after the bike had been sold.

This 2012 Tiger 800 is dripping in sensible upgrades, each of which will have set the keeper back a fair chunk of money. Manufacturers now like to offer us a base model, and then chuck goodies at the bike to create different models within the range. It can be like choosing a meal deal when you’re faced with two or three variations on the same theme.

With an asking price of £4,500 this white Tiger looks to be a no brainer, especially when you look at the prices of 2018 models.

Blinded by the sellers lengthy list of extras he’s saved the bad news until last; the bike was subject to an insurance payout in 2014. The damage is long since repaired, but the category D marker will dent its resale value, and also create an issue if you try and part exchange it at a dealers further down the line.

That said, if you enjoy living in the moment and want a fully loaded Tiger 800, I wouldn’t rule it out. 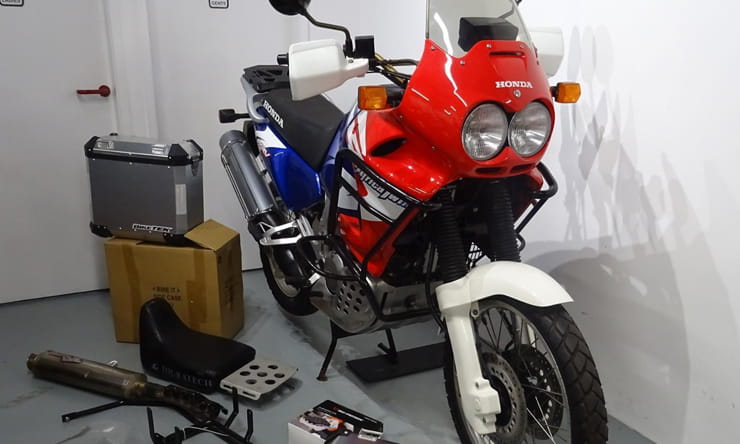 Here’s a puzzler for you: Would you spend £7,000 on a 15-year-old motorcycle? With no shortage of the re-launched 1000cc Africa Twins on the used market, it’s only a matter of time before you can pick up one of them for around this money.

The XRV750 is a brilliant bike, it’s good looking and very well built.

It’s also pretty basic, which might explain why this one owner machine comes with a mountain of useful parts.

There’s everything you could possibly need to kit out this immaculate bike and take it touring. The parts stash includes a comfy saddle, panniers and even aftermarket foot pegs.

With only 6,908 miles recorded in 15 years this is probably one of the finest examples up for grabs. With prices for these original 750cc models appreciating, it’s only a matter of time before the ‘new’ 1000cc Africa Twin becomes the cheaper option!

Anorak Fact: The first Africa Twin model was a 650cc version, it quickly grew into a 750. 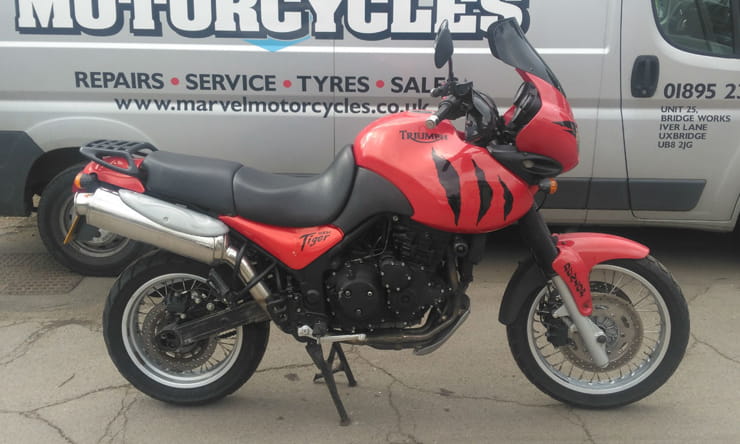 Modern Adventure bikes have come along way, the technology is part enforced by Euro 4, part brought about by manufacturers wanting to tempt you to buy their product; well all love a gadget or three.

It wasn’t always like this, and to best appreciate how far we’ve come we don’t have to look too far back. The second generation Tiger 955i was more than just a bigger engine and a styling exercise. For many owners it was both their first Triumph, and first Adventure styled bike. It is particularly good machine for riders who are 6-foot tall or more as it’s a big bike.

When compared with other bikes of its type the Triumph is often overlooked, this makes for a great buy if you like doing things on a budget. The looks haven’t aged well; this might also detract from its worth.

This Tiger is pushing just over 40,000 miles on that once cutting edge white faced speedo. With an asking price of only £1,999 it really is a lot of bike for your money.

Anorak Fact: Later 955i Tiger models came with cast wheels, these are the models to aim for.