Pick of the Ads: Triumphs

Today's Good, Bad and Ugly from our bi-weekly scavenge around the classifieds is all about big, burly Triumphs.

"With Triumph unveiling a couple of new models from their 2018 line up, this week's Good, Bad & Ugly takes a spy at three bikes they made earlier," said Scott. 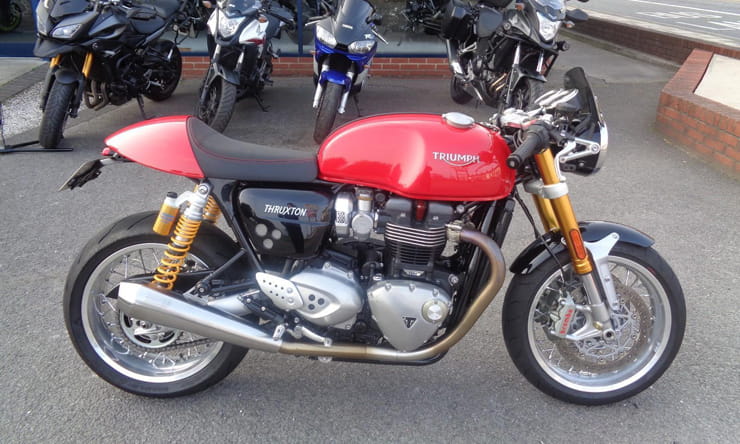 If you like your bikes to ooze character than you’ll love the Triumph Thruxton 1200R.

The stock version is a very well sorted package, but the 1200R comes with some tasty cherries on this retro looking cake. These include; Brembo brakes and Ohlins rear shocks, which help you enjoy the 95bhp that the big parallel twin 1200cc engine churns out.

A standard bike for many is just the starting point, especially within the café racer community. With no shortage of goodies on the market not too many Thruxton’s remain standard for long. The most popular modification is to turn up the volume, this bike is a good example of this. Gone are the original silencers, and instead it now sings through a pair Vance & Hines silencers; it’s also been treated to a decat to help it breath more easily.

This 2016 example is obviously in showroom condition, and it comes with a few other non-standard trinkets including a fly screen, tail tidy and different style handlebars. Style never goes out of fashion, which means that the Thruxton is one of those motorcycles that’s always in demand.

Anorak Fact: Service intervals for the Thruxton are every 10,000 miles. 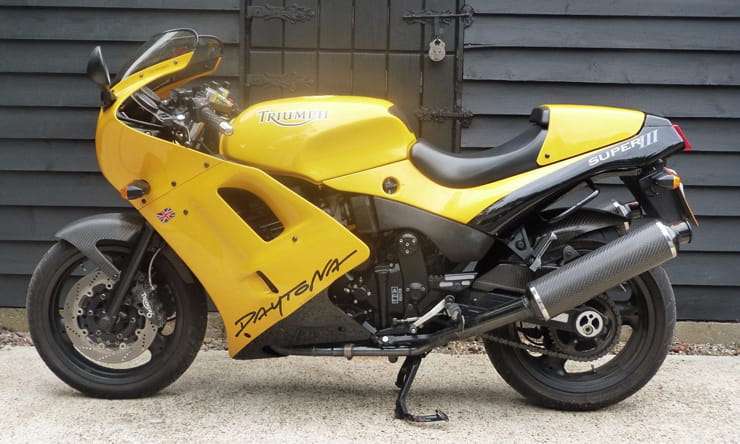 Sporty 900s were all the rage in the 1990s, so it was a logical plan for Triumph to include one within their modular range. The standard Daytona 900 had no chance of competing against the Honda Fireblade, Kawasaki ZX9R or even the Suzuki RF900 for that matter, so Triumph hatched a plan to reduce mass, up the power and try again.

The Daytona Super III was the result and is a very limited run of only 150 bikes added to its mystique. Twenty years later it’s a very rare bike, so if you do fancy treating yourself to one you’ll have to pay highly for the privilege. Is it a price worth paying? Well, that’s down to you to decide.

Cosworth were commissioned with finding the extra poke, they used high compression pistons and waved their magic wand over the cylinder head. The result was 115bhp from the three-cylinder engine. Weight reduction resulted in the use of carbon fibre; the mudguard and silencers are the obvious parts that make the Super III stand out from the lesser Daytona model. To help haul it all up were some six-pot calipers complete with Triumph branding on them. This example comes with an asking price of £4,595; that’s a heavy price tag for a heavy bike. 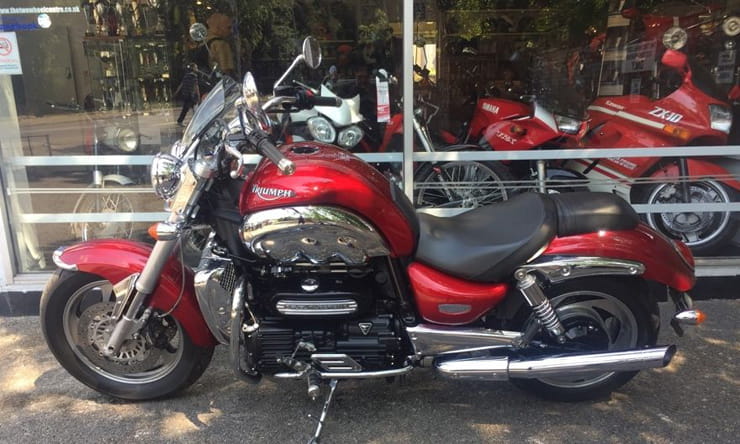 They say you can’t beat cubes and if you subscribe to this mantra then here’s the perfect bike for you. With a capacity of 2,294cc this isn’t your average motorcycle. Introduced in 2004 the Rocket III is a firm part of the Triumph family.

It appeals to many, there’s a few guises including the Tourer version and this one we’ve plucked from the internet is a Roadster version.

Originally designed with one eye on the American market you can see where Triumph were going with the concept. Dead straight roads and warm weather and you could trundle forever, but substitute that for the A47 in a downpour and it’s suddenly less attractive.

The Rocket III is one of those models that can divide a room, those that get them can’t get enough of the monster machine.

Used prices are the only thing that’s shrinking on this bike, this super clean 2007 model could be yours for £5,999.

Anorak Facts: The 2004 model had a silver finished engine, this changed to black from 2005.