Most of us have to get to work somehow every day, but these five easy-to-handle midweights will help make it less of a hassle and more of a highlight. And they're equally capable of plastering a smile over your chops on a twisty road at the weekend too. 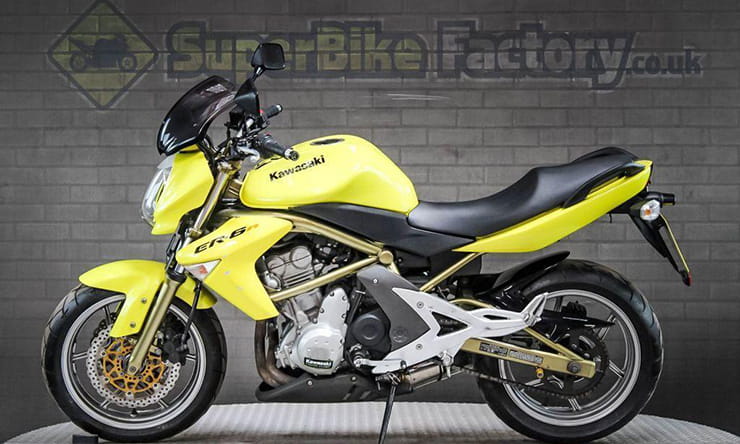 When the ER-6 first came out it was a revelation - quick, perky, sweet-handling and just as much fun for experienced riders as it was was for newbies. The market's moved on a bit since then, but a good ER-6 is still a fine choice. The engines are pretty much unburstable - they're used as the basis for a lot of mini-twins and super-twins race bikes, and if they can cope with being pasted round the Isle of Man they can cope with the M25. It does vibrate quite a bit though. Problems are more likely to come from the electrics - early bikes like this one often suffered chafed wiring round the headstock, and water ingress into the main connector blocks is a real potential problem - take time to clean every connection and protect with silicon grease. Same goes for the main fuse block, which is vulnerable to water fling from the rear wheel. Alternator failure isn't unknown at about 25-30,000 miles. Elsewhere, the suspension wasn't well greased at the factory but should have been re-greased by now (worth checking) and the exhaust is prone to cracking where the silencer joins the collector. A stiff gear change is probably just seized pivots on the lever. Check the frame for cracking around the right hand engine mounts (just under the VIN plate) - early models had spacers which weren't quite wide enough, putting the mounts under stress once the bolts were tightened. The ER-6 was built down to a budget, so the finish wasn't great - if you find a shiny one it's a sign that it's been properly looked after. This one looks pretty good. On sale at the Superbike Factory in Macclesfield, it's standard apart from a gear position indicator and an aftermarket can - we'd want to try and get the original can included in the sale as MoT testers are getting a bit more sniffy about loud cans these days. It's only got about 7k miles on it, so shouldn't be in need of any major work, although we'd check the tyre date codes to make sure the tyres aren't eight or nine years old... 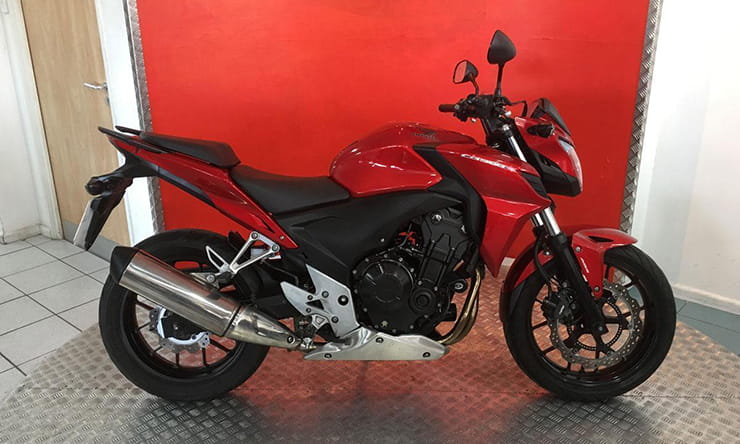 The earlier CB500 parallel twin was a hugely successful bike for Honda - a natural commuter bike that could also boogie in the bends (and on the racetrack - it had its own single-make series for years). It always looked a bit dowdy next to the Suzuki SV650 and Bandit, and Yamaha's Fazer 600. 2013's new CB500F changed that, with much more modern and aggressive styling. It was the first medium-to-large capacity bike to be built in Honda's facility in Thailand. It was still a parallel twin, but the engine layout was about all it shared with the old model - everything esle was new from the ground up, including the capacity – down to 471cc from the earlier bike's 499cc. One reason that doesn't matter is its intended audience – it's specifically designed to comply with A2 licence requirements for power and power/weight ratio (as well as being limited to 112mph), so since that's easily achievable with the capacity reduction, no reason to worry about whether it's a 'real' 500. ABS brakes are standard, but that's about it for gadgets - this is a no-frills package. Not the most comfy seat for a long day in the saddle, but for commuting and weekend fun it's fine. Really needs a hugger and mudguard extender to keep the crud off the shock and front of the engine, especially as the finish isn't as robust as you might like, especially for foul weather use. No real mechanical or electrical gremlins to report - it's a reliable budget bike. Buy on condition and service history rather than age and mileage. This particular one ticks all the right boxes. On sale at main dealers Doble Motorcycles in Surrey, it's done just under 10k miles in its four years on the road, but has obviously been looked after - it's clean as a whistle. It's standard except for R+G frame protectors, a genuine Honda tank pad and Datatag security marking. 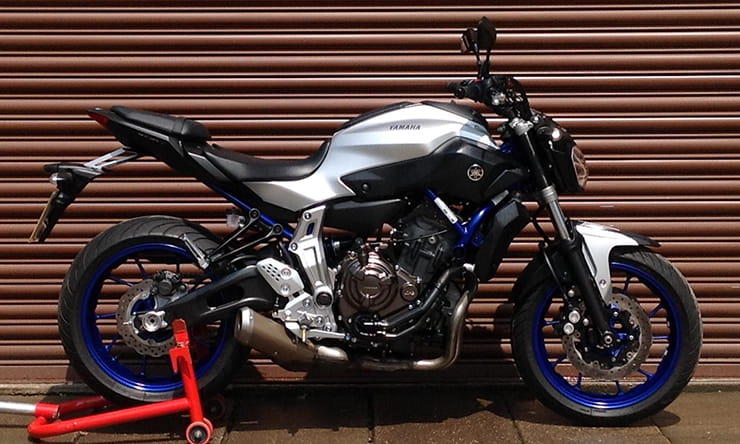 The MT-07 isn't just one of the best fun commuters you can buy, it's one of the best bikes full stop. It's mostly down to the engine - a stripped-down, lightweight 689cc inline triple which punches way above its weight, driving hard from low down but then going on to a searing, howling top end when needed. It's partly down to the light weight – just 179kg all-up with a full fuel load. And it's partly down to the sporty but stable geometry and instinctively welcoming riding position. But mostly it's down to the way all that lot works together to make something that's way better than the sum of its parts, and was way cheaper than anyone expected when new - the MT-07 was just £5199 at launch.

That budget price comes mostly from production savings – it's specifically designed to use fewer parts and less labour to produce – but it's been built down to a price too. Some of the plastics are pretty flimsy and some of the fasteners a bit cheaply finished. That means you need to keep a close eye on condition - both when you're buying used, and when you own one. The tank's pretty small at just 14 litres, but even so, that's light for a budget middleweight, but that doesn't hurt the range as it's easy to get between 60-70mpg. Well, so long as you're sensible, and there lies the problem – the MT-07 is such a perfect partner for a spot of hooliganism, whether through the bends or on one wheel away from the lights, that 'sensible' sometimes doesn't get a look-in.

Two main problem areas - suspension, and finish. The suspension's not particularly bad - just a bit cheap and chearful, although some heavier riders find it much too soft. But it struggles when you start to push hard, especially over poor surfaces. The finish is the real issue though - ride it in all weathers without taking care of it and you will watch it go furry before your eyes.

This 2015 model, for sale at MotoUK in Staffs,  has only just over 3000 miles from new, and the condition looks to reflect that - it's looks very clean and tidy. Standard except for Datatag marking, it's got all three standard keys (very important) and has a nearly new set of Michelin's excellennt Pilot Road 3 tyres. It's a restricted A2 model, but don't let that worry you - de-restriction is easy -peasy so long as you can prove you have the right licence. 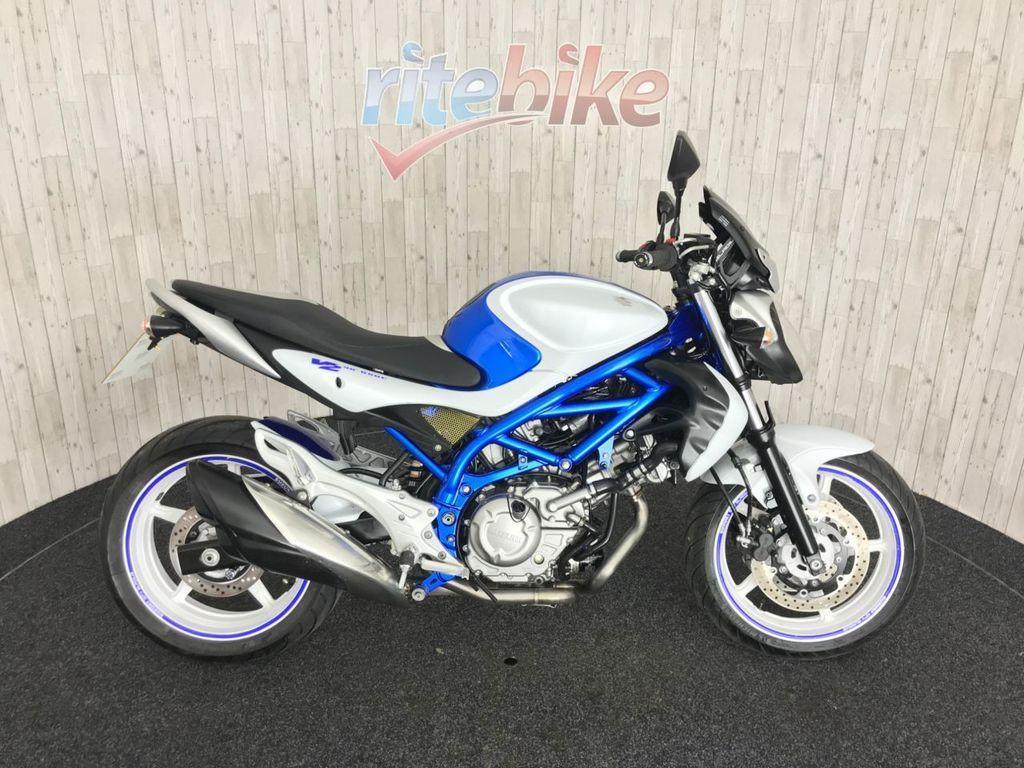 Daft name aside (a Gladius is the short stabbing sword of the Roman legions, in case you're interested), this is a great bike. The engine's straight from the SV650 (all bar different cam profiles and valve springs and a heavier crank), which is no bad thing, and the chassis is excellent - better handling than the SV, small, lithe and incredibly well balanced. It's a budget bike, so the suspension and brakes aren't top drawer, but they work fine and it's easy to upgrade them should you wish (bits from various other Suzukis bolt straight on – the rear shock from a 2006/7 GSX-R600 goes more or less straight in, for example). Engine failures are rare although not unknown, especially if owners have neglected oil changes or allowed the level to get too low. Major carnage is usually down to failing cam chain tensioner blades, but you get plenty of audible warning, and they're easy enough to change. Misfires in the wet are common – usually down to water shorting out the spark plug caps. K9 models like this were recalled for a regulator/rectifier fault, but all should have been fixed long ago. You still need to keep an eye on the wiring though, especially the main connectors from reg/rect to loom. Brakes are ok when new, but prone to getting less powerful when they get gunged up – clean and free everything off frequently. Check the rear suspension pivots for free movement - they didn't get much love from the grease-gun at the factory and it's often skipped at service time. The finish is probably the biggest weak spot - a neglected Gladys is hard to bring back to a nice shine. The front of the engine in particular gets a lot of stone damage from the front wheel (a mudguard extender helps a lot) and for the same reason it's worth investing a radiator guard. At just under 20k miles, this 2011 example is just about run in. For sale at Rite Bike in Bradford, it's got heated grips, that all-important radiator guard, and a partial service history. It's got the air of a bike that's been properly cared for – not always the case with these. The rear tyre looks a bit squared off – we'd be angling for new tyres as part of the deal, or some cash knocked off the asking price. 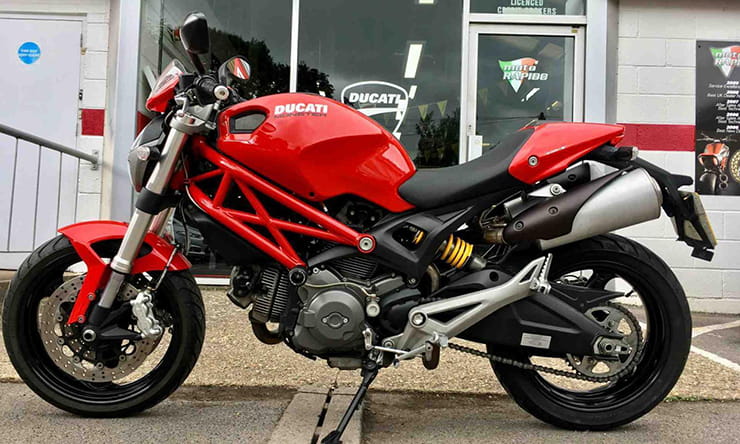 Everyone loves a Monster, and the 696 is one of the best. Built from 2008 to 2014, it took the original Monster styling, but added underseat exhausts, radial brakes and a slightly sportier riding position.

Everyone assumes that because it's Italian it must have dodgy electrics, but that's not true - they're not actually more prone to faults than any other bikes. And they use top quality waterproof connectors rather than the cheap white ones so beloved of the Japanese factories. Engines are normally reliable, but you really need a service history so you know the cambelts have been changed and valve clearances set, and ideally from a Ducati specialist so you know they've been done properly. Problems do sometimes arise from people riding in too high a gear and expecting the V-twin engine to just grunt its way from right down at tickover in top. All that does is cause extra vibration - they're actually happier being revved a bit. They're a bit less happy in town than some of our other choices here for that reason - it's not so easy to just trickle along on a whiff of throttle - and also because the turning circle isn't that good. So it's sometimes hard to thread in and out of really dense traffic. Suspension and brakes are high quality, but the front brakes in particular need regular cleaning - there are no dust seals on the calipers pistons so they get clogged with dust.

One thing to watch out for is the plastic fuel tank (not the painted covers, the actual tank itself). It can be attacked by the ethanol in modern unleaded, at which point it expands slightly and then doesn't fit any more. This is becoming a real issue with lots of Ducatis as they get a bit older. IF you find one that still fits properly cherish it by avoiding cheap unleaded (and especially E10 fuel which has the most Ethanol content) and sticking to branded 98 Super Unleaded wherever possible. This 7k mile example is completely standard except for R+G crash protectors. It's got a full Ducati service history, and sellers Moto Rapido in Hants are established and respected Ducati experts, so you can be sure it's been checked out properly.