Today's Good, Bad and Ugly takes a look at the Suzuki SV650 range.

“Suzuki didn’t have too many new models to show off at Motorcycle Live,” said Scott, “other than their ‘new’ SV650X that is. What better time to look at the Good, Bad & Ugly of all things SV650.”

It’s been a heavy few years for café racer inspired motorcycles and there’s no sign of our appetite waning for these factory customs.

For 2018 Suzuki have tarted up their Suzuki SV650 and given it another roll of the dice, underneath the trimmings it is basically a stock SV650 though. Creating a café racer is one way for motorcyclists to express themselves, when the manufacturers start building them for you it kind of defeats the object, in my humble opinion.

Suzuki reintroduced the SV650 to their range in for 2016, the back to basics bike combines a proven power plant with stripped back looks and it’s a great little bike. The trouble is there are no bad bikes in the popular twin-cylinder middleweight corner of the market. When you put the SV650 head to head with the Yamaha MT-07 and Kawasaki twin-cylinder bikes, the SV650 often ends up being the bridesmaid.

Away from a machines technology and looks there’s one vital piece of the jigsaw that’s critical in creating a sales hit; the price.

The SV650 carries a list price nearer £6,000, that’s steep for a bike that doesn’t even have a screen. The internet is awash with new unsold SV650s, which leads dealers to pre register their stocks to help bring the price down. December is a great month to trim a few more quid from these already discounted bikes. With dealers hanging tinsel over bikes that are soon to become so last year, if you fancy a new bike, now’s the time to pick up that phone and haggle.

This Suzuki SV650 echoes what Suzuki have gone and done to the 2018 SV650X. It’s been fitted with some extras from the Suzuki options catalogue, the end result does look very smart. The price is also attractive, at a quid below five grand for a brand new bike it’s great value for money.

Anorak Fact: The current SV650 comes with clutch assist which is supposed to increase the revs slightly at the point the clutch starts to bite to help reduce the chances of a stall. 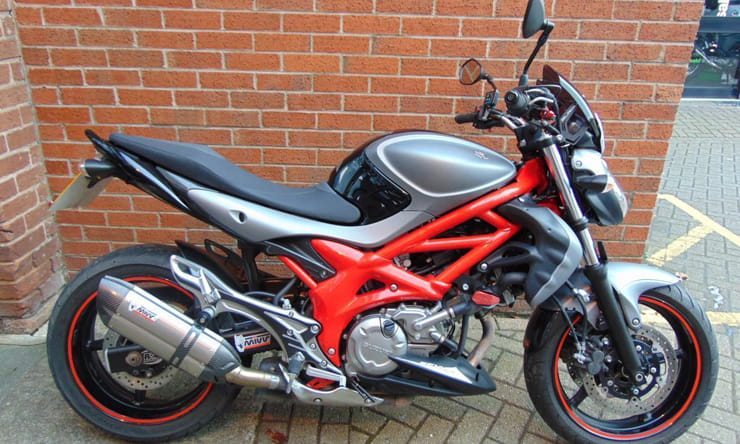 The Gladius is powered by the tried and tested SV650 v-twin engine, no issues to be had there; It was more a case of ‘nice legs shame about the face’! the styling of the bike was the biggest talking point and not fir the right reasons.

Weight was a smidgen over 200kg and the 785mm seat height meant it was very user friendly, if you can get past the looks there’s actually a decent bike beneath.

This 2015 machine is one the later models and it’s had a stack of aftermarket goodies thrown at it by the previous keeper. These include useful upgrades like heated grips, screen, crash bungs and a belly pan. The standard silencer is now replaced with a posh looking Mivv can.

There’s only 8,500 miles recorded and it comes with a service history.

Price wise it’s not the cheapest Gladius out there, sitting at £3,950 it’s well inside generation three SV650 territory, which is where personally I’d rather spend my money.

Anorak Fact: Suzuki reverted to iron liners in the barrels of the Gladius. 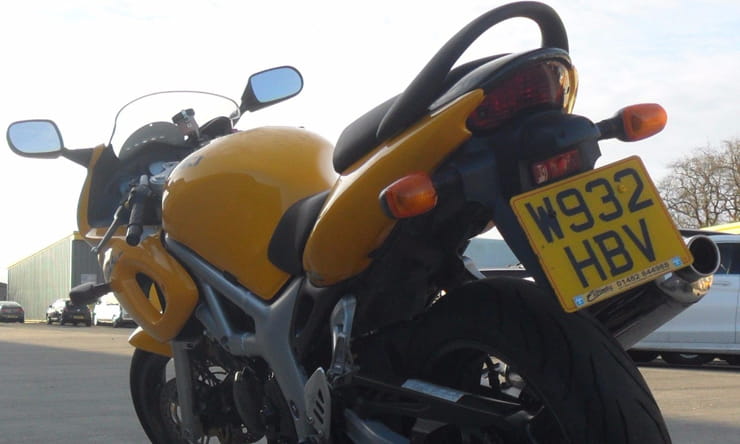 Suzuki already ruled the middleweight class with their Bandit 600, that didn’t stop them tooling up in 1998 and creating the SV650. Like the tried and tested Bandit formula Suzuki aimed for the budget end of the class. The mission statement didn’t end there, they also built a faired and un-faired model.

The undressed SV650 was the better looking out of the two, the half faired S version was more practical thanks to that fairing but was never a looker.

The earliest examples are now getting on for twenty years old, so finding a good one can be a tough job. It’s worth hanging in there though, because they do exist.

Those distinctive looks haven’t matured too well with age, many bikes have been used and abused and with prices for good bikes struggling to break £1,000 nobody rushes to lavish new parts on these overlooked v twins, meaning many bikes end up being broken for parts.

This SV650S is a good honest example and it’s survived pretty much intact.

The big wobbly indicators are still there, along with the standard exhaust and silencer. The yellow paint might not be to your liking; it was though one of the factory colour options offered by Suzuki. For only £1,300 you could be the proud owner of this first generation SV650.

Anorak Fact: The SV650 makes a great track day bike, they even had their own mini twins race series.