Pick of the Ads: Black Friday

Today's Good, Bad and Ugly takes a look at bikes that look back on a companies past.

“Triumph have done a Henry Ford with their 2018 Bobber Black,” said Scott, “here’s a few other motorcycles that went black to the future.” 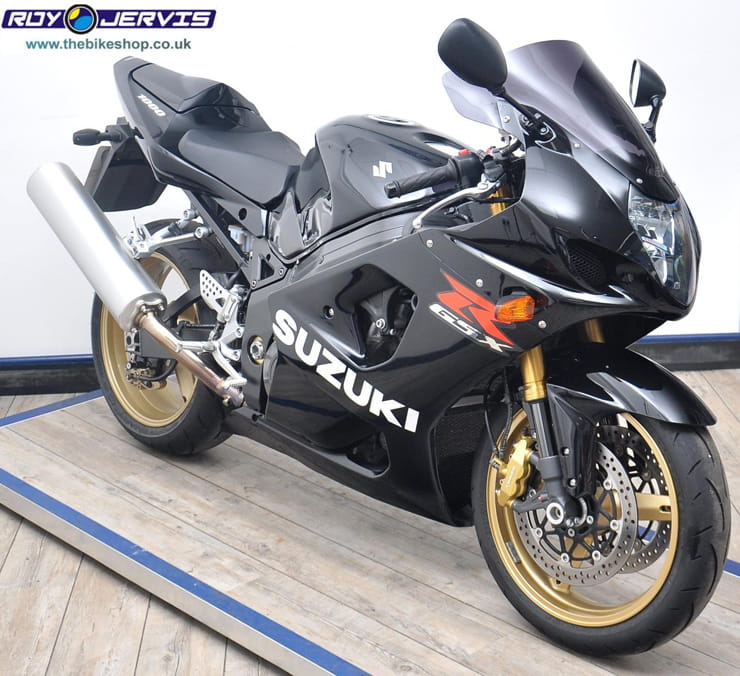 Time flies, especially if you ride a Suzuki GSX-R1000. The earliest K1 models are now getting on for 20-years old, so there’s plenty of choice if you can’t stretch to the price of a new one.

The K5 is for many the choice of the earlier models, but we’ve got a soft spot for its predecessor the K3/K4 model.

For many people a GSX-R of any capacity should be resplendent in a blue and white paint job, for others they like them a few shades darker.

The GSX-R1000K4 went one step beyond and even the frame was finished off in a satin black. The GSX-R1000-Z K4 is its full model designation, they’re pretty hard to find these days, this one that we’ve stumbled upon is a real gem.

With only 2,206 miles under its belt it is a stunner! Adding to its charms is the fact that it’s totally standard, right down to the big indicators and the standard exhaust silencer.

£6,000 for a 13-year-old bike might sound a bit steep, but if you aren’t too hung up on owning the latest model this K4 could prove to be a smart buy. The GSX-R1000K3/K4 model is still more than capable of being better than you are, with around 160bhp at your disposal and a chassis that is more than up to dealing with it, this gorgeous example is actually pretty decent value for money.

Anorak Fact: Suzuki built a limited edition version of the Slabside GSX-Rs, finished in gloss black with gold decals it was called the Endurance and had even more kudos. 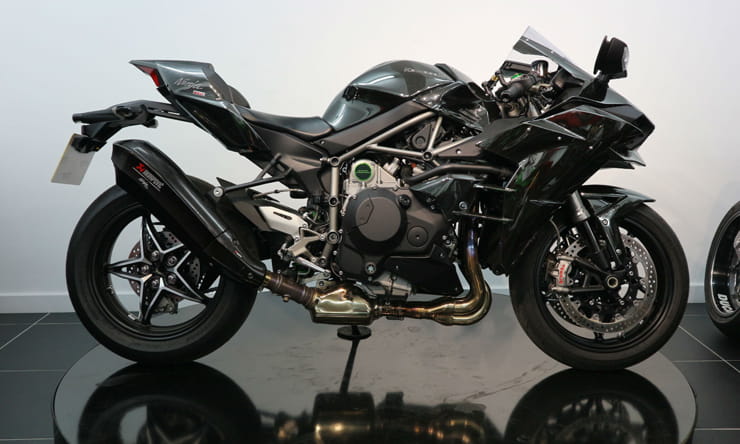 Every week it feels like that there’s another ultimate super bike that’s wheeled out to set our pulses racing, bhp figures are banded about like it’s a game of Top Trumps; power goes up, weight goes down and we think we’ve seen it all, then along comes another variation of the theme.

There’s still no badder bike on the market than the Kawasaki H2. It’s the schoolboy benchmark of what’s the fastest bike you can buy that comes with a manufacturers warranty.

The good news is that used examples are filtering down to the used bike market, not too many but a steady trickle are starting to emerge. The black beauty still retains its street cred, it’s a bike that makes everyone stop, look and gawp.

This example is barely run in; it’s covered a measly 300 miles from new.

The addition of an Akrapovic carbon can adds to the lure of the dark side theme. With Kawasaki adding a SX version to their supercharged range it’s a good pointer to other models getting charged in the future, until a Z1000RS supercharged model appears, this is still the baddest Kawasaki in the range.

Anorak Fact: The original Kawasaki H2 was a 1970s three cylinder two stroke. Kawasaki also added the H2 badge to the ZXR750H2 and the GPz550H2. 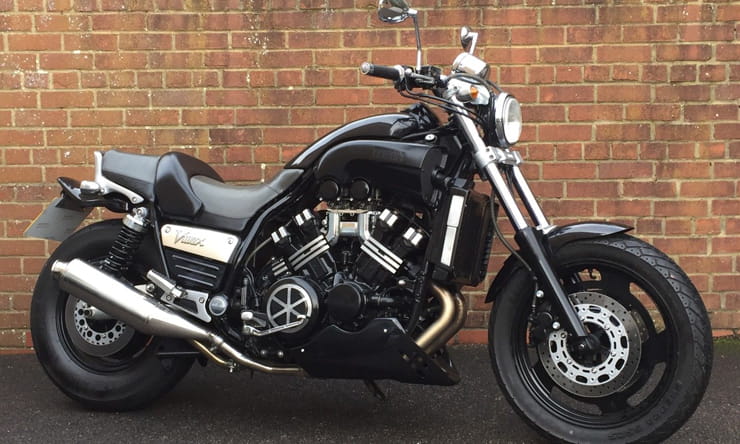 A majority of iconic motorcycles are those that have bad manners, often because they have way too much power for their lacking chassis.

We appear to secretly like motorcycles that don’t handle. Yamaha took this theory to the limit and created the V-Max. The bike quickly gained a reputation for producing big power and big clenches! An icon was born.

During the 1990s it got a shot into its arm with some attention to styling, one version was clad in fake carbon but the other kept it simple with dollops of black paint. Everything from the wheels to the calipers got smothered with a glossy black finish. The result was well received and looked stunning.

V-Max prices have rarely dipped to the bargain basement area, even those needing tlc are snapped up quickly.

This ‘Max looks the part, more importantly it’s a proper full fat model that’s fitted with the V-boost system. Other than a replacement exhaust this one looks to be pretty original, it’s even got a wad of old paperwork including old MOT certificates.

Anorak Fact: The rear wheel from a Yamaha Diversion 900 is a popular conversion within the V Max world.