(e)BayWatch | OTT one off specials

Motorcycling attracts mavericks. Out there in shedland there are hundreds of talented, visionary engineers, beavering away to create something truly different and very special. Some are do-ers; drawing up plans, fabricating parts, tweaking and modifying till their crazy baby is finally just-so. Others are OCD project managers; making lists, sourcing parts, finding the right experts to make their dream a reality. Whatever, all of them are heroes who make what we do better. The finished products range from stunning to, er, less so and for those of us with more money than time or talent, their labours can be our opportunity to own something un-ber-flippin-lievably-special for a fraction of the time, money and effort that it cost. Because for these guys it’s often not the winning, but the taking part that matters. Many such bikes get built and sold on relatively quickly.

There are two key rules for buying someone else’s special. Firstly, pay only what you think it is worth, not what they do, because they know how much time and money they spent and that will colour their view. You are simply buying a bike that has certain style, performance and zero emotional attachment.

Secondly, leave a large chunk of your budget to get it properly safety-checked, and finished off or re-commissioned by someone who knows what they are doing. Plenty of beautiful looking specials turn out to have been assembled by someone who doesn’t understand torque settings, suspension set-up or why the front sprocket needs to be in line with the back one with an eight-inch rear wheel fitted.

Many of these bikes are built for aesthetics or show and little consideration has been given to how they actually ride. Even when a bike has been built by a reputable expert, it will need at least a service and going over. 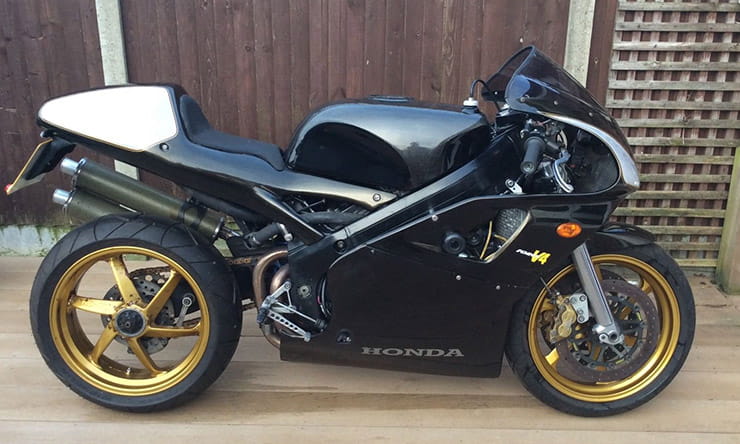 Honda’s RC30 is the Japanese classic that everyone agrees on. This roadgoing version of the stunning mid-80s RVF race bike dominated early WSB, the IoM TT and every other four-stroke race series and could be bought and ridden on the road for the same money as a Ford Escort. Prices have been rising steadily for the last ten years and a good, standard example now sells for £25K-plus.

This one is a long way from standard, which is a good thing in some ways, but less so in others. The most obvious difference is the bodywork which appears to be a kit offered by the much-loved RC30 maverick Thorsten Durbahn. The photos show that it needs some attention, particularly a crack in the carbon fuel tank which may be just cosmetic or…not.

Likewise the PVM wheels (RC30s need aftermarket 17inch wheels because the only modern tyre available for the standard 18inch back wheel is shared with a Harley V-Rod) are a bit tatty.

This bike has clearly been built at great expense. Even if we forget the cost of the base bike, there’s a dyno chart showing 116bhp at the back wheel (24bhp up on standard) and that doesn’t come cheap from an RC30 motor. The suspension, brakes and clocks have all been modified, not a lot remains of the original bike.

And, sadly that’s the problem. RC30s are worth big money because they are RC30s. This bike is now a long way from an RC30 and, unless you are a serial collector looking for a Durbahn bike to complete your set or are wanting the tuned engine and other aftermarket goodies for your classic race bike project, it’s hard to justify paying £15,000 for what is effectively a tatty, carbon-clad 30-year-old sports bike making the same power as a 20 year-old GSX-R750.

Add in the issues of almost zero availability of spare panels should you damage the bodywork, the need to spend probably another £5k getting it restored and suddenly, this looks like a very expensive and undesirable project.

And… it would be worth it. This bike clearly has had some serious money and attention spent on it. Done right, it could be the King Dick at any RC30 meet up. Or, just sit on it, wait for the right standard parts to come up at the right price and enjoy having a bike you can ride without fear of damaging it, while you accumulate the bits to put it back to standard. If you love these bikes and have so much money it doesn’t matter and the contacts to do it properly, you’ll have something really special once restored.

For the same price as the RC30 above you could have another crazy Honda, this RC166 Hailwood replica based on a 1982 Honda CBX1000. Of course, it’s not really a replica – Hailwood’s Honda six was a 250cc screamer and his entire bike probably weighed less than the engine in this one. But for sheer presence and noise this thing will be hard to beat.

There are few details on the bike and the tax disc expired in 2009 suggesting it might need some careful recommissioning. What is apparent though is that someone spent some serious time and money building this, probably at a time when CBXs weren’t as collectible as they are now and could be bought as a donor bike cheaply.

Not much of the original bike remains. There are several people in the classic race scene making replica 60s Honda race frames This will have been a one off, not just because of the CBX1000’s size, but also because it has no lower engine mounts to fit in the cradle as the original CBX hung its engine from the spine frame.

In truth, this bike is about show, not go – think of like a custom bike, a chopper for those of us no longer comfortable wearing our Motorhead patches outdoors. Short trips to the bike meet or classic show, making a proper six-pot racket are what this bike is built for and compared to the price of a blinged-up Harley or triumph Thunderbird, £14,999 is a bargain. 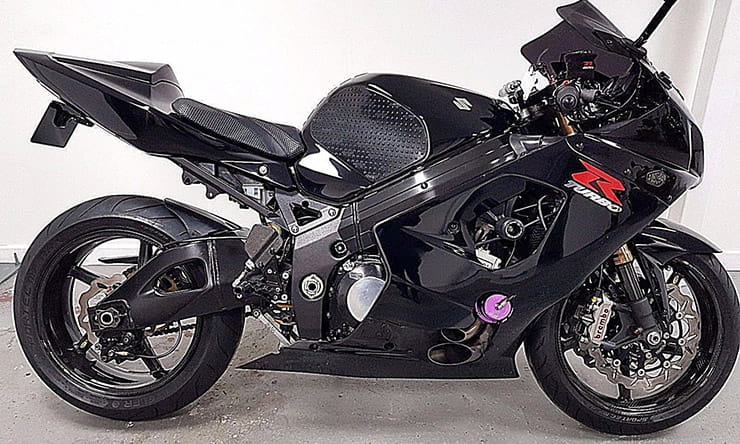 Modern cars use turbos for efficiency and economy, but they are still rare on bikes and making forced induction work across a 14,000rpm rev range is harder than you’d think. There are a couple of experienced turbo tuners in the UK bike scene and this GSX-R was built by one of them – Big CC Racing in Wokingham.

Turbocharging a sports bike takes a lot of expertise, but done right, a turbo’d bike is easy to ride, building power smoothly and strongly, with no glitches or turbo lag. As well as the turbo itself a bike engine needs a lot of replacement internals and careful fettling to run right, be reliable and usable too. Someone spent a lot of money on this one – the list of parts that have gone into that motor to make it do what it does is longer than we have room for here (click the link above, it’s all in the ad) and Big CC build fast, reliable motors. Instead of then extending the swing-arm to exploit the extra power in a drag-race launch like most turbo specials, the owner went down the sporty handling route, leaving the wheelbase standard and uprating the suspension instead.

This should be a monster – one of those bikes you keep for a summer, survive the experience and pass on before you get too cocky. Our only advice would be to budget for a trip to Big CC so they can look it over, refresh if necessary (because when unleashing 300bhp, you want it to work properly) and get everything running as they want it to.

Anorak fact: The first ‘production’ turbo bike was a 1978 Kawasaki Z1-R, modified and tuned by Kawasaki USA and sold with ‘no warranty, actual or implied, whatsoever’