If you think touring's just a case of grabbing toothbrush and credit card, locking the front door and then heading off into the blue on whatever bike you've got handy, look away now. On the other hand, if you don't want to stop at the kitchen sink, but want to take the dishwasher as well, come on in. These big, comfy super-sofas will swallow a fortnight's luggage and whisk you and a pillion off to the horizon in comfort and style. 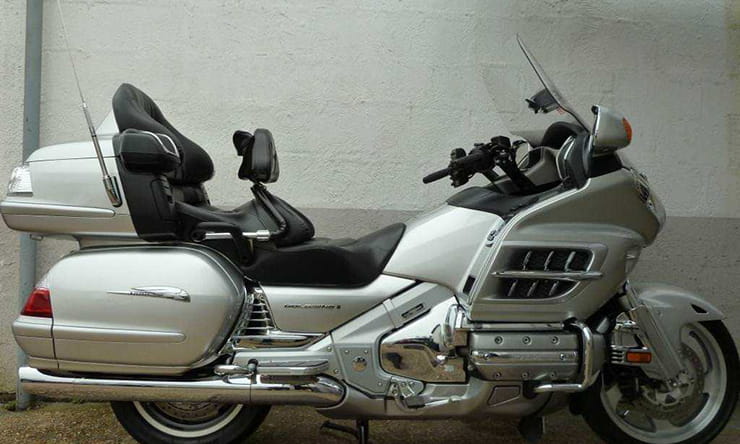 You can't talk tourers without including the Goldwing. Designed and originally built in the US, the Wing is the two-wheeled equivalent of a big Winnebago motorhome - luxurious, heavy, outrageously comfortable and actually surprisingly practical. The huge engine is smooth as velvet, and although it's a handul at parking speeds, once moving it's beautifully balanced and actually handles prety well - although ground clearance quickly becomes the limiting factor. It's the comfort and the gadgets that appeal the most though. This 2007 model GL1800 is fully loaded - satnav, air bag, upgraded stereo (with CD changer in the top box), airbag, cruise control (of course) reverse gear and more. Mileage is pretty much irrelevant on these - they're almost always well looked after - but this 22k example is so clean you could eat your dinner off it.  There are a few known issues though. There's a lot of electrical stuff on a Wing, so you need to make sure it all works properly - faults can be costly to sort out. Make sure you get the spare key with the bike, and keep it safe - lose both and you have to change the ECU. Alternators are known to give trouble, and they're a sod to change.There are also issues with the OE sat-nav system on some models, including this one - updated maps are no longer available. Mechanically they're robust, but front fork anti-dive units can seize, as can the rear suspension adjuster unit. The gearbox is clunky, but shouldn't be noisy or jump out of gear - if it is/does, then walk away. Unsurprisingly, the Wing is very heavy on brake pads - keep a close eye as you can easily wear out a set in a few thousand miles... 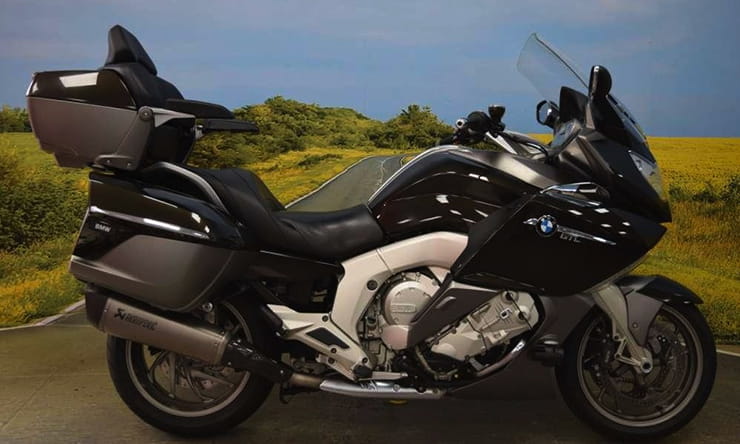 Depending on who you talk to, a K16 is either the best bike in the world, or an unreliable money-pit that should be avoided at all costs. As usual, the truth is somewhere in between. The early models (2011/2012) did have a lot of teething faults - clunky transmission, heavy oil consumption unreliable switchgear and more. But later bikes are much more sorted, and tend to give less trouble. It still makes sense to try and find one from a BMW dealer, and with a decent service history - it'll help if you do have warranty issues later. This one's for sale at CMC Motorcycles in Cannock, has just 13k miles on, and has a full service history. It's not cheap, but it's fully loaded with goodies including keyless ignition, Xenon headlights, quickshifter, electronic suspension and cruise control. The earlier the bike, the more carefully you need to look for signs of neglect - the engine finish is suspect on earlier ones in particular, and damage (it's easy to drop one of these at parking speeds, and that can result in a fair bit of carnage. Look out for overheating too - could be a sign of impending water pump failure (although it could just be that the system wasn't bled properly after a service). And check that ALL the gadgets and switchgear work as they should - electrical gremlins can be very hard to track down and sort. Find a good one, like this, and that 1649cc six cylinder motor is absolutely brilliant, backed up by a chassis that makes 330-odd kilos of kerbside lard melt away as soon as you're moving - these things can really hustle down a twisty road. The GTL has a massive 26.5 litre fuel tank which gives you a range of up to 270 miles if you're not too throttle happy. Comfort is more than up to those sort of intervals too. GTL versions are top speed limited (to about 140mph), incidentally, to avoid stability problems caused by the massive luggage and more upright riding position. One last point - the K16 has Bluetooth built in, but it works best with BMW's own accessories - if you use aftermarket intercoms or sat-nav, for example, you may find connectivity is limited. 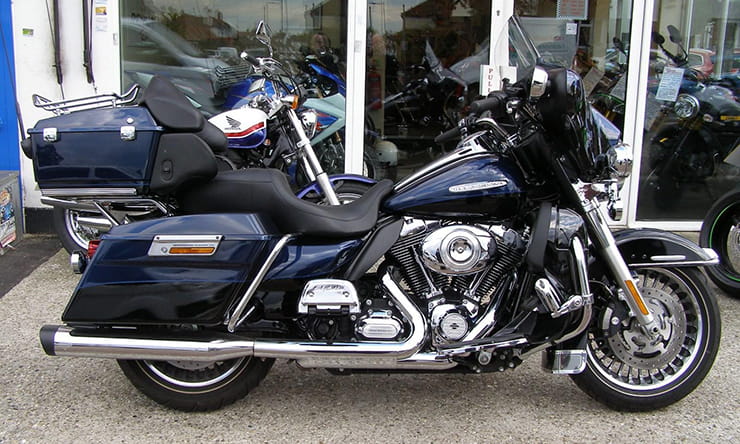 Want to get your kicks on Route 66? This is what you want. Although actually it'll be just as good on the A66. Harley's biggest tourer is probably the most comfortable bike on the planet, and although it may look as if it's been unchanged since the 50s, the more recent versions are so much more refined than the bikes of ten or twenty years ago that you really need a test ride to appreciate it. At under 7000 miles, this 13-plate version with the Twin Cam engine is barely run in and looks in perfect condition. After 2013, the Glides got a load of upgrades from earlier spec - bigger engine, six speed box, cruise controle, linked ABS brakes, a stiffer frame and built in security, as well as adjustable suspension. It's fair to say they're more desirable as a result. This one doesn't have that - which is reflected in the price -  but it does have Vance and Hines exhausts, a mild engine tune. It comes with a six month warranty, and a test ride's available - so long as it's not raining!

These big Harleys tend to hold their value well, so in the long run it won't cost you any more than buying  Japanese bike. It helps that the engines are seriously reliable - like 250,000 mile reliable - so long as you keep up with basic maintenance. Valves are hydraulic, so no clearances to set (although they are a bit clattery when cold), but the cam chain tensioners are usually shot by 60,000 miles (and sometimes much sooner). Electrics can give trouble if overloaded with too many accessories - the older the bike, the more likely it is that connectors will have corroded or the regulator/rectifier will be struggling. At high mileages the rubber engine mountings droop, allowing the engine to knock against the frame - look at the primary drive case and there should be a gap between case and frame. Otherwise the main problem is keeping all that chrome and paint shiny. 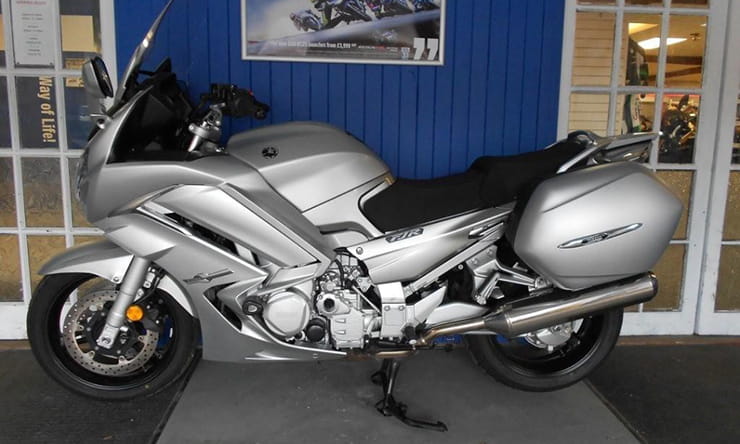 Positively sporty next to the BMW, Harley and Goldwing, but still an excellent long distance tourer. The FJR has been around in more or less the same form since 2001, with just a few regular tweaks to keep it fresh, and it's testament to the soundness of the original design that it's still a relevant bike today. This one has under 5k miles on the clocks - you could reasonably expect it to do more than twenty times that mileage before the engine gives any trouble. Camchain tensioners gave trouble on earlier bikes but that was sorted long ago and you're more liikely to have troubel with the gearbox, which is a bit clunky even when new, but can get worse if it's been forced into gear too quickly, too many times. Problems tend to be more electrical than mechanical, with frame earth connectors in particular causing all sorts of weird glitches on earlier bikes. The battery's a bit minimal too - a weak one can also cause hard-to-trace problems. This one's new enough so that shouldn't be a problem, but there are a couple of things we'd check anyway - the rear suspension linkage, head bearings and final drive splines were usually under-lubed at the factory. Sort them out while the bike's still nearly new and they'll last many, many years - neglect them and they'll seize, with expensive consequences. Same goes for the brakes - regular strips and cleaning are the way to maintain performance long term. Otherwise, the main problems you're likely to find are down to a slightly iffy finish on engine and chassis parts - winter use can quickly take its toll. 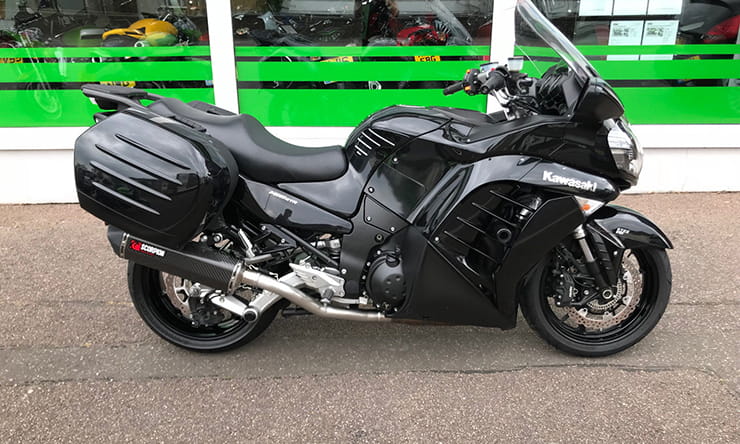 A slight oddity here - a big, heavy touring bike that isn't that good for two-up touring. Why? Well, the pillion seat's a bit minimalist, and the extra weight at the back seems to upset the GTR's otherwise fine balance. But as a solo tourer, it's superb, especially if you want to attack the twisty bits at the other end of your journey. The GTR's been around since 2007, with an engine based on the ZZR1400 hyperbike, but with variable valve timing and lower compression giving a huge extra dollop of midrange. Mix that in with a big, protective fairing, taut suspension and great brakes, fuss-free shaft drive and ABS, and it should have been a hit. A lot of potential owners were put off by the lack of toys though - no adjustable riding position, no cruise control, no heated grips, etc. Fortunately he basic package is so good that it's been a steady seller ever since, despite its lack of gadgets. This is a nice, clean example with low miles and standard except for a carbon Scoprion exhaust, radiator guard and rear hugger, plus crash protector bobbins. It also has Kawasaki's own very handy sat-nav mount. It's for sale by a Kawasaki Main dealer - Bournemouth Kawasaki - and comnes with a three month warranty and Datatag. WIth such a recent, low mileage bike, there's really just a few things we'd check. The rear shock adjusters can seize, so check they move freely. The pannier fittings are poorly designed and can allow the panniers to fall off if not fitted exactly right - check for damage. The keyless ignition fob's battery is marginal - if it doesn't work you won't be stranded - you just have to put the fob very close to the headstock. The fob takes a standard CR2025 battery, so it's not a problem, but a failed Tyre Pressure monitor is more of a faff as the battery is hard-wired into the sensor. There is a way of modifying it to take a standard CR2032 battery. On older bikes, we'd check rear suspension linkages and head bearings for adequate grease, rear final drive splines ditto - they can wear badly - and check brake discs for warping. We'd insist on a test drive too - some earlier bikes had gearbox problems. The symptom feels like a misfire under loads, but it's actually the gearbox skipping teet, with expensive consequences.