Yes, you can buy into Ducati ownership without breaking the bank, as this selection of blood-red thoroughbreds proves. None of these bikes is over four grand and some of them considerably less, but they still have the looks and presence on the road to turn heads wherever you go. True, you'll need to budget for a little more time, effort - and cash - to keep them fettled than you would for an equivalent mainstream bike, and a couple of these examples need a bit of extra work to bring them up to scratch as well, but everyone should own a Ducati at least once in their biking lives. 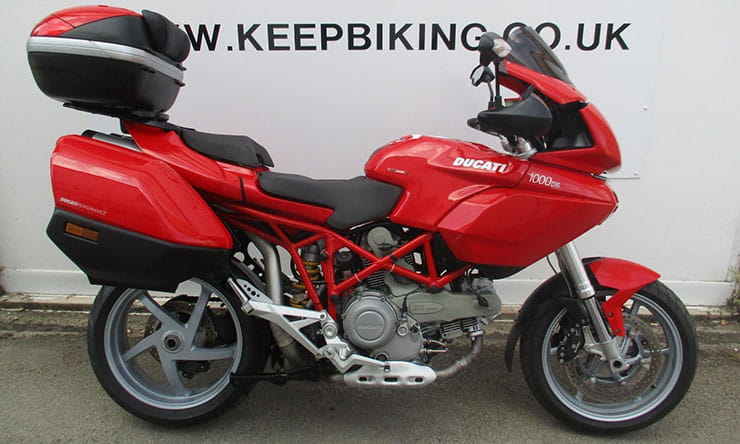 Yes, yes, we know - it's as ugly as sin from the front. Ducati soon realised that was a mistake and gave subsequent Multistradas a sleeker, sportier look (which is one reason these early bikes are a relative bargain). But what really matters is how it rides, and these ride very nicely indeed. The 2-valve engine, in 1000cc Dual Spark mode like this, is a great unit – reliable (yes, really!) grunty and full of character, and it's perfectly suited to the Multistrada's upright stance, comfy riding position and sports-touring pretensions. Ducati's panniers are a slightly odd shape but they'll swallow a fair amount of luggage, while the enormous top box (Givi, we think) will take even more. Everything does tend to end up smelling a bit of exhaust fumes thanks to those high level exhausts though. The suspension's pretty goopd, although the rear shock's usually oversprung and if the forks are even slightly overfilled with oil they'll have a very harsh feel.

All the usual Ducati caveats apply - checks for crash damage, poor earths, loose fixings and fittings, and charging system problems. The sellers say it comes with a service book, but don't say whether it's complete and/or up to date. At just under 11k miles it's not far from having a big service due at 12,400 miles, which includes timing belt change, so you'd need to add that to your list before you head off on your holidays.

New grease in all bearings wouldn't go amiss, and it's worth stripping the rear hub, greasing the eccentrics and re-assembling - they have a habit of seizing. Also worth investing in a decent C-spannner for chain adjustment to avoid damaging the adjuster, and carrying a suitable socket for the rear hub nut incase of punctures while on holiday - you can get a tyre changed or mended anywhere, but if you can't get the wheel off first you're stuffed... 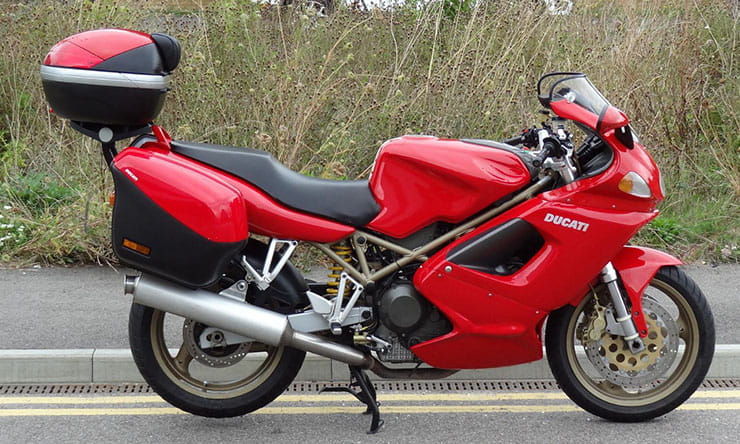 Never the sexiest of Ducatis but the ST2 (air cooled, 2-valve) and and ST4 (water-cooled, 4-valve) deliver a big chunk of sporty V-twin performance whilst keeping the rider - and pillion - relatively comfortable over distance. This ST4 is basically a re-tuned 916 engine in a chassis that'll cope perfectly well with twisty roads and trackdays, should you wish. It's a great way into Ducati ownership without the extreme riding position of a sportsbike.

Best of all, the Multistrada range took away most of its target market, so they're undervalued at the moment. Even so, a little over two grand is very cheap for what you're getting. OK, so it's got 33k miles on the clocks, and it's got a few scuffs and scratches, but still looks nice from a distance. On the plus side, too, it's had a recent service with new belts and valve clearances, and throttles balanced. Any sensible buyer will give the whole bike a good going over as soon as possible - re-greasing head and swing arm bearings and suspension pivots in particular, and stripping and cleaning brake calipers before renewing fluids. But it now, fettle it over the winter and look forward to some sporty touring in the spring and summer. 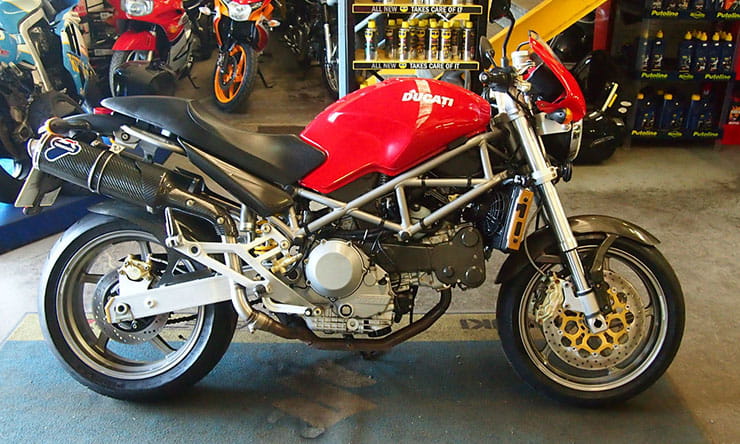 Monsters are always great fun - excellent balance, great handling, lovely for wheelies... Add the water cooled engine from the original 916 and you've got a winner. Ground clearance is the limiting factor in the twisties, and lack of steering lock the limiting factor in town traffic, but otherwise they're a lot of fun, and this model with the standard swing arm retains the original Monster's simple lines, rather than the blingier looks of the later single sided swing arm versions.

As with any Ducati, service history is important and there's no mention of that in the classified ad, so we'd want to ask a few questions on that score, and if there really is no history, budget for a cambelt change and valve clearances immediately. It looks generally very clean, but odd details like the rusty front brake caliper bolts strike a false note for us on such a low mileage bike. The discs look pretty worn as well. We'd also want to check the whole bike over carefully - bearings, consumables, and general condition. It's got quite a few tasty extras including the high level carbon Termignoni exhaust, but it would be even nicer if the original bits came with it as well. 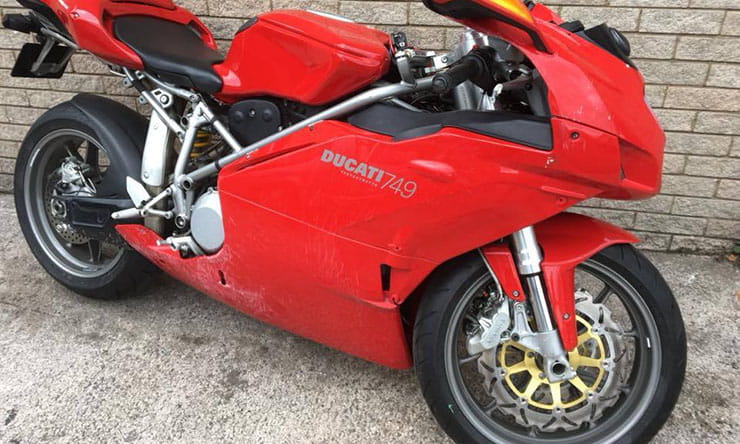 A very low mileage 749 with service history for under four grand? Sounds too good to be true, but there is a reason. It's been down the road (or more likely into a gravel trap...) at some point and at the very least needs a proper repair and touch-up to the fairing, maybe a full repaint. It looks from the photos as if the swing arm has suffered too, which is more of a pain. If you're willing to acccept that, though, it looks like a potential good buy. Although the cambelts are listed as having been changed 300 miles ago, that was in 2016 and they don't really like being sat unused for any length of time. Add in the probability that it's been through a gravel trap and we wouldn't take the risk of some grit having made its way past the covers and damaged the belts. So budget for a belt change ASAP. The full Termignoni exhaust is a nice touch, although we'd prefer to have the original as well, just in case.

There are a few specifics to check with a 749. The clocks can give trouble if they've suffered water ingress – the only solution is to get new clocks, but they need to be reprogrammed to match the bike's ECU. Brake calipers don't have dust seals on the pistons and are known for getting sticky – frequent cleaning is required. Electrics are generally ok but main frame earths are inadequate (run new heavy duty versions instead), and the fuel pump relay can give trouble. It's hiddden behind the battery box and difficult to get to, but otherwise easy to change. Poor starting is often due to the aforementioned earth problems, or a slipped Throttle Position Sensor.

Otherwise we'd be looking to make sure there's no serious damage hidden away behind those scuffed fairings. 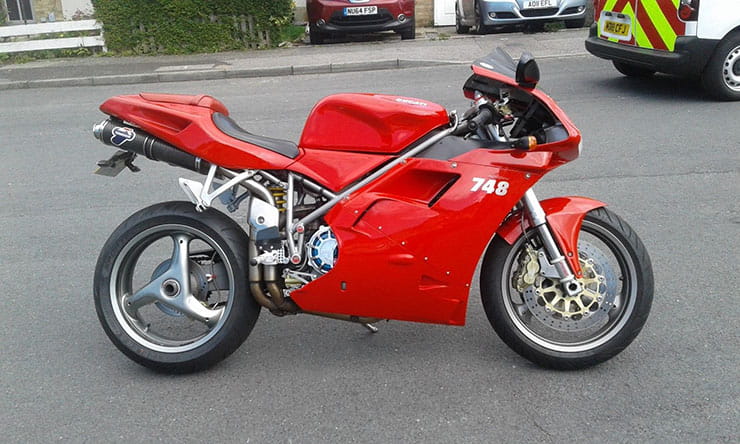 Normally we'd be suspicious of such a low selling price for such a clean-looking 748 - they usually go for a fair bit more than that. but the seller's up front about the reasons – for a start it has no service history, which always hurts the resale value of any Ducati, and especially the sportier (and hence more highly stressed) models. And secondly it's listed as category N insurance write-off due to having been stolen and recovered. At this price we wouldn't let that put us off too much. It's had new belts recently, as well as a new clutch and tyres, and generally looks pretty tidy at first glance.

We'd want a proper look at the bike before shelling out though. Frame damage is common, especially on ex trackday bikes, which also tend to show heavy wear on suspension adjusters and chipped wheel rims from frequent tyre changes. Early wheels are prone to dents and dings, valve rockers are prone to excessive wear if the bike's spent a lot of time at high revs. Electrics aren't the nightmare people assume, although charging faults aren't uncommon. Seized suspension bearings and bushes, as well as the rear chain adjuster eccentric, can be costly to sort out. If in doubt take a sceptical and knowledgable mate along with you with a specific brief to find as many faults as possible. Tempting though....