Unless you've just won the lotttery, you're probably not going to be riding off on one of these bikes this weekend. In fact, even if you have just scooped the jackpot, you probably won't be riding off on one – either because actually riding it will be reducing its value as a long term investment, or because it'll need a thorough re-commissioning before riding, due to years of static display.

So why bother? Well, partly for the investment, but partly because whatever else they may be, these five beautifully made, limited edition bits of loveliness are (almost) priceless bits of motorcycling design history. For some people, just owning one is enough – there are plenty of other bikes for riding.

Warning: you might want to sit down before you look at the price of the last one... 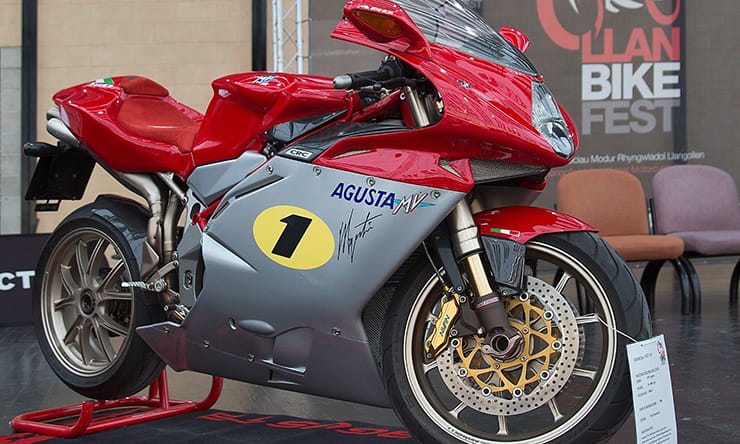 There are many versions of Massimo Tamburini's sublime F4 design, from the original sweet-handling but underpowered F4 750 Serie Oro through to the sledgehammer-fast F4 1078 RR 312 Final Edition, with over 190bhp and 190mph available to those with deep pockets and the skill to tame it. In between there were various special editions honouring luminaries from Tamburini himself to Ayrton Senna, Lewis Hamiltion, Cagiva boss Claudio Castiglioni and, in this case, multiple world champion Giacomo Agostini. Most of them are dripping with extra posh components, but the Ago replica is quite restrained in that respect, with posher coatings on the forks stanchions, uprated Nissin brake calipers and lightweight forged wheels being the main differences from standard spec. The best bit, though, is that at a time when MV were losing their way a bit with over-fussy paint schemes and too much bling, the Ago retains the classic red and silver paint which suits the bike's silhouette so well, augmented only by that yellow '1' plate and an 'Ago' logo on the tailpiece. 300 numbered examples were built, of which this is number 275. It has 4000 miles on the clocks but doesn't look it. It comes with all the original extras – special paddock stand, a tailored cover, factory certificate of authenticity and even a special bit of carpet to park it on. This particular one has also been personally autographed by Agostini himself, and comes with photos of Ago sitting on the machine. It even has a special number plate: AG04 AGO, which is a really nice touch. 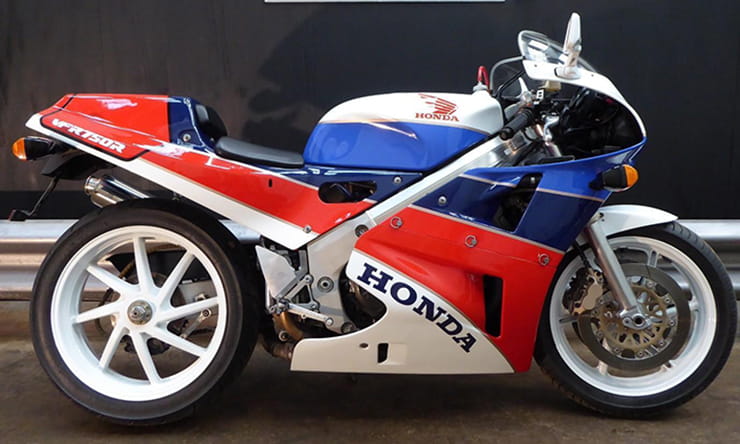 Three words sum up the RC30: still got it. Thirty years after the first batch hit the UK (a year after the first Japanese deliveries), the combination of incredible build quality, beautiful looks and sublime handling and steering is still a winner. You need to be a bit careful though – as values climb there are people trying to pass off well-worn race bikes as low mileage examples, and with many parts unavailable, it can be hard to put a non-standard bike back to proper spec and condition. There are also lots of Japanese imports out there, which have a different spec – power restriction, different lights, mirrors and indicators, and other details.

This one is listed as being imported from Japan, but as far as we can see it's a genuine and original full-power 1990 model, given away by the red Honda logo on the tank, full sized headlights and indicators, and original white mirrors. 1990 RCs were only built to UK and US spec, but US spec ones had an RC30 logo on the tailpiece so we think this is a UK-spec bike, of which only around 100 were built in 1990. It's pretty easily checked via frame and engine numbers (see www.rc30.yolasite.com for more details), but if true that means no worries about restriction, or about the valve seat recession problems on the earlier Japanese models (the material was changed in 1989). With just 14k miles on the clock, it looks very clean indeed – we'd want to check the fit and condition of the bodywork, especially the join between screen and  fairing - if either have been replaced or the fairing's been repaired, this join is usually noticeable where it should be smooth and neat. The sellers - exotic bike specialists Extreme Trading in Norfolk – know their RCs and point out that the paintwork has suffered from micro-blistering. There are very few RCs that haven't suffered from this at some point as the combination of wafer-thin, hand-laid fibreglass bodywork and 80s paint tech weren't a good combination. Perversely, we'd take this blistering as a good sign that the paint - and bodywork – is all original and hasn't been mucked about with. 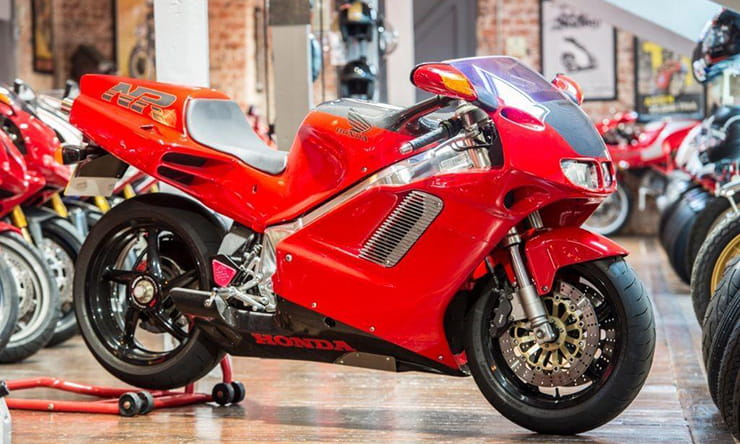 When the NR750 first came out, it was so outrageously expensive – around £38,000 in the UK at a time when the latest 750cc superbikes were only just over six grand – that it was universally derided as a waste of money. It didn't help that in terms of performance it wasn't particularly exceptional, topping out at around 160mph. So what is it and why was it so expensive? It's the final fruition of Honda's 1980s obsession with oval piston technology. Put simply, four-stroke performance is less about engine size and more about valve area, which defines how much air you can process through the engine, and how quickly. An oval piston four-cylinder is effectively the same as a V8 with the bits between each pair of pistons filled in, and allows more valve area per unit of piston surface area. So much for the theory - in practice manufacturing difficulties (it was incredibly diffficult to get an efficient seal between piston, rings and bores) and the power advantage of the 2-stroke design meant it never had a chance in GPs. Eventually HRC gave up, turned to the dark (for them) side and built the NSR500 2-stroke, with which they dominated GPs for a decade. Oval pistons were yesterdays news but there was still a huge amount of corporate pride involved, so the road-going NR was a chance to showcase all that tech in a gloriously over-the-top road bike, and then draw a line under it. And it had to happen for the 1992 model year, because all of Honda's main patents for the oval piston design (and there were around 60 of those involved just for the design of the piston rings...) expired at midnight on December 31, 1991.

So that's the history. The reality today is that an NR is still an impressive beast, and that outrageous price tag is starting to look less like throwing money away, and more like a very shrewd long term investment... 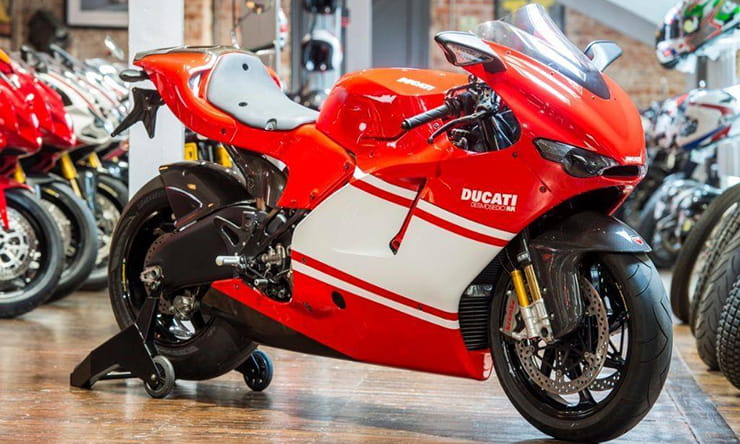 For nearly a decade, this was the closest thing to a MotoGP bike that you could buy for the road. Some would say it still is. Based on the full-on GP6 missile, it featured as few concessions as possible in its transformation into a supposed road bike. Ducati knew perfectly well that most of these would end up in the hands of collectors and barely turn a wheel, and this one is typical - it has just 51 miles on the clocks. The specification is as jaw-dropping as the original asking price of £40,000. The bodywork is all carbon fibre, the engine features magnesium casings and titanium valves and fasteners, and the clocks are an LCD screen and computer nicked directly from the GP7 racer, complete with built-in full-featured datalogger. Forged Magnesium Marchesini wheels and Brembo brakes are pretty much the same as used on the race bikes back then as a wet weather set-up – the carbon brakes used in the dry wouldn't ever get up to working temperature on the road. The performance is well up to the hype too – the Desmosedici has around 200bhp available, and it's only pushing along around 170kg of bike, so acceleration is intense and a top speed of 190+mph awaits. Surprisingly, the power delivery is actually very controllable, and there's grunt aplenty low down, with the mad stuff only happening from about 10,000rpm up to the 14,000rpm redline. The frame itself  – a trademark Ducati steel trellis design – is almost identical to the race bike. Unless you're a serious (and we mean front-runnning BSB level) racer pushing hard on slicks, the suspension will be way to firm as standard, even on track. But there's plenty of scope for adjustment. 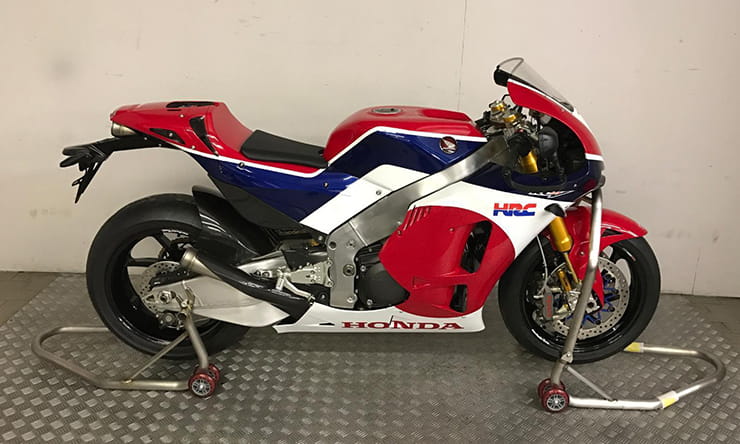 If the pricetag on this limited edition (just 213 are being built) racetrack refugee had you incredulously spluttering the Yorkshireman's battle cry of 'How much...!?' then you're not alone. It is indeed breathtakingly expensive. So expensive, in fact, that you could buy all four of the other bikes listed here, and still have a couple of grand left over for a champagne and drugs binge to celebrate. So is it worth it? The question's irrelevant really – the only one that counts is, 'can you afford it?'.

If you can, what you're getting is basically a 2014 MotoGP bike – the RCV is a production version of the RCV1000R which Honda provided for well-heeled CRT-class privateers in that year. It's not that far from the full-on works version either, although like the CRT bike, it uses a conventional valvetrain rather than the works machine's cutting edge pneumatic operation. Honda claim the wheels, swingarm, brakes, clutch, forks and controls are nicked directly from the race bikes. Naturally it comes with keyless ignition, traction control, wheelie control, quickshifter, switchable power modes (nine-way) engine braking control and datalogger. You also get the specific RCV accessories – a tailored indoor cover, special charger for the Lithium battery, and front and rear padddock stands.

In standard roadgoing form the RCV  is restricted to around 160bhp, which clearly isn't enough (in some markets it's also restricted to 7000rpm...). Fortunately this one – number 007  – comes with the full 'Sport' kit, which includes a race ECU, race exhaust and a ram air kit which replaces the headlight, as well as a switch to race gearshift pattern (one up, five down). In that spec it's claimed to make around 220bhp, and it's pretty much ready to race. The race kit helps explain the price premium over the standard RCV, which retailed at a mere 140 grand when first announced. Oh, and the red/white/blue paintwork on this bike was a six grand option as well...

So, it's fast, powerful, impresssive, but is it worth the money? Probably not, but we can all dream...