Europe. We may be leaving the political union but there's still plenty to love about the continent itself, not least a thriving base of motorcycle brands that have taken on – and in many cases beaten – the dominant Japanese factories both on the racetrack and on the street. This week we're looking at bikes that can bridge that gap and work as well on a trackday as they do on a twisty A-road. We've set a maximum of ten grand to stop ourselves getting carried away, but a few of our choices fit that budget with plenty left to spend on tyres, fuel and trackday places.... 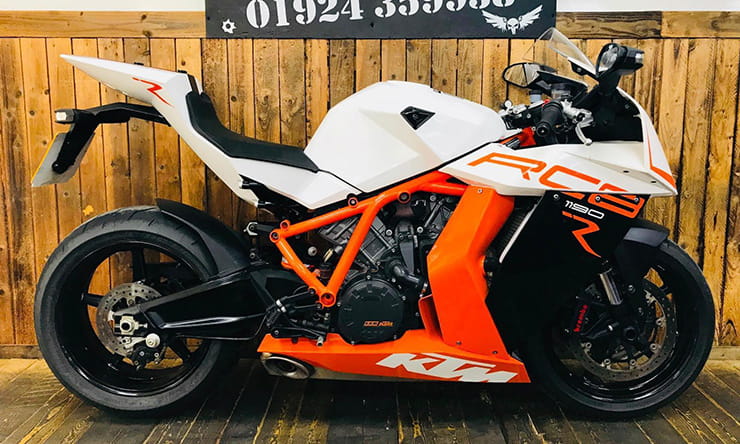 The RC8 was KTM's first (and so far, only) experiment with big sportsbikes, and despite its pointy, aggressive looks it's actually a really good everyday ride – good suspension, great riding position, and even the seat's a lot comfier than it looks. It helps that pretty much everything is adjustable – seat position, pegs, bars, levers, the lot. And they're reliable - we know of several with well over 50,000 miles on them, so this one's barely run-in at under 8k. This is the R version, so it's a little more refined and better specced than the original RC8 – bigger engine (1190cc vs original 1148cc – this late one also has twin spark plug heads) softer throttle response, better fuel mapping, even better suspension, and more stable geometry. Sadly it doesn't have the posh Marchesini wheels that graced the 2009/10 R model, but you can't have everything... You also don't get anything in the way of electronic rider aids - no switchable maps, no ABS, no traction control... But that's a plus point for a lot of riders. At this mileage we'd only really be concerned about the condition of the battery - you need a completely healthy battery to kick over those big pistons, and trying to start one with a tired battery can lead to expensive kickbacks. 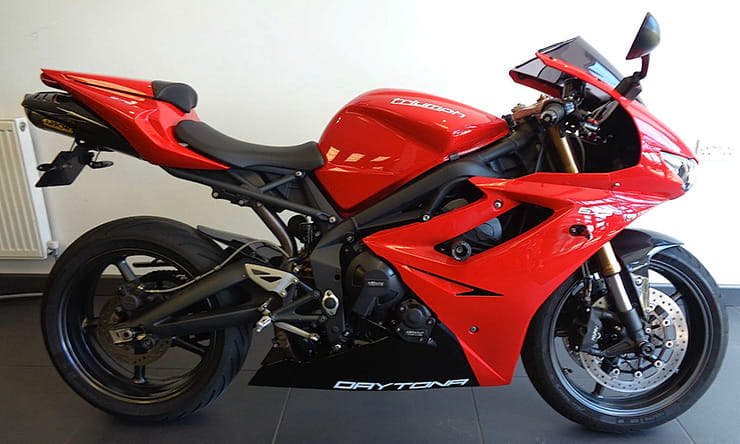 The smallest bike in our list, and the cheapest, but arguably the most fun. The 675 Daytona is light, lithe and incredibly nimble – point it down a twisty backroad or head out of pit lane on a trackday and a big grin is bound to ensue. The revvy triple motor has a character all of its own, with far more midrange than an equivalent four, but plenty of top end too. This one's low mileage at under 9k  and looks clean as a whistle. It's been treated to some nice extras including carbon mudguard and hugger, crash bungs, a quick shifter and Rizoma adjustable levers. It's also got an Arrow can – we'd check if it's been set up properly on the dyno, as even standard bikes suffer from slightly iffy fuelling and free-flow cans can make that worse. Otherwise listen for undue rattles from the top end (it's not unknown for valve collets to drop out, and a rattle is sometimes the first sign it's about to drop a valve) and overheating (usually due to the cooling system not having been filled/bled properly after a service). Heavy oil consumption is a problem on these if they've been thrashed from cold, so check for oil smoke from cold startup. Older/higher mileage examples also suffer from electrical gremlins due to corroded loom connectors and dodgy reg/rect units, but we wouldn't expect that to be a problem here. 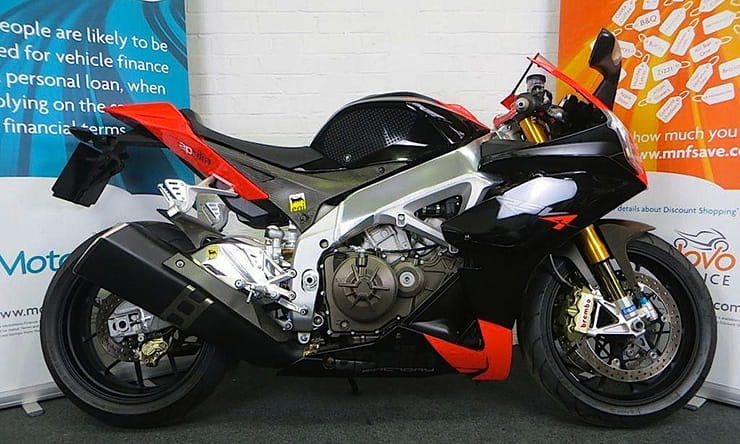 Aprilia's V4 doesn't get the public acclaim of the Ducatis or even the BMW, but it's a hell of a bike. And for the same money as an equivalent S1000RR, you're getting something far more special-looking and in many ways better specified. This Factory version has Öhlins forks and shock, top-spec Brembo brakes, and a raft of electronics including launch control, traction control, quickshifter and wheelie control. Lashings of carbon fibre too. Astonishingly, it has its original bulky silencer, which doesn't restrict it much - it'll still have getting on for 180bhp available... These were big money new - nearly seventeen grand when the S1000RR was 'only' twelve grand, so the asking price here looks like a relative bargain. The downside is it's not a relaxing ride, on road or track. The motor's pretty strong in the midrange but for real progress you need to be screaming it up to its 14k redline, and the handling is more race-bike precision than road-bike practicality – it rewards commitment, and it's frustrating if you just want to potter about. But for fun in the fast group on a trackday - and for turning heads on the road – it's a great choice. Spares supply for Aprilias is always an issue, as are servicing costs, otherwise they're no more hassle to live with than any modern superbike. Specifics: the Öhlins forks are notorious for minor oil weeps, the original catalytic converter blocks up easily, killing the performance, and oil leaks from the top end are common after servicing (hard to get the gaskets to seal properly). One of the most annoying problems, though, is swelling of the plastic fuel cell due to ethanol in cheap unleaded. You really shouldn't run one of these on anything but the best 98, which contains very little or no ethanol. 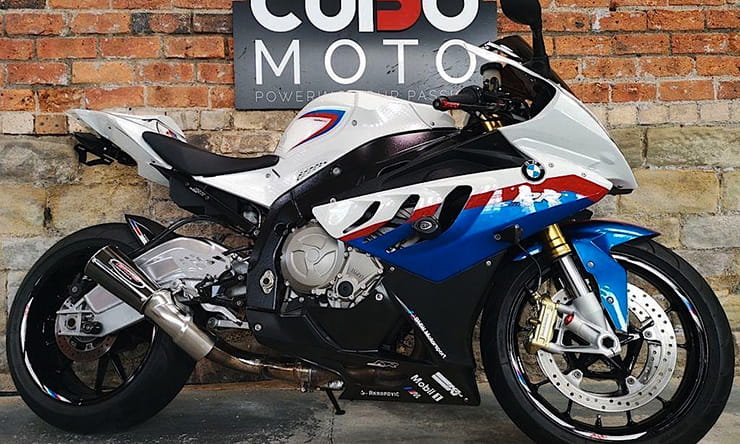 The bike that redefined what a road-going superbike could do. Stuffed with performance-enhancing electronics, and packing enough punch to make the competition look a bit weedy, it was nevertheless a very useable road bike as well as a perfect trackday tool. This is one of the very first S1000RRs, so there are a few things to be aware of. The earliest suffered from undue engine vibration - not actually a fault, more a by-product of a high state of tune and very light engine internals. From late 2010 onwards they had a heavier crankshaft to damp it out a bit. Conversely, the throttle action on early bikes is a lot heavier than later ones - you can modify the return spring to make it lighter, and we'd be surprised if this hasn't had that done already, given the long list of modifications and upgrades it's had. It's also possible to fit a 2012-on throttle assembly for a more direct action. Other things to watch for include the gearbox - never the slickest out there, and prone to damage, especially with extensive use of the rather crude quickshifter. Even good ones are notchy and hard to find neutral, but if it's actually noisy or jumps out of gear under load, run away. Otherwise it's general condition that counts - this has a full service history, apparently, which is a good sign, but the finish on the S1000RR isn't as good as you might hope from BMW, so any neglect will be apparent as you peer behind the fairing. 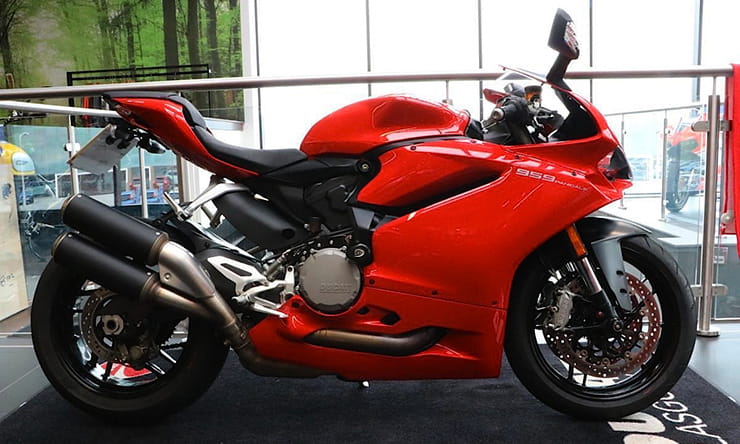 This is about entry level price for a 959 Pani - decent 899s start around £8500, but if you've got the extra dosh, a low mileage 959 like this makes a lot of sense. Actually no, scrub that - a highly-strung Ducati twin doesn't really make that much sense at all. But if that's what you want, a 959 is a lovely place to park your leather-clad bum. From the 916 onwards, Ducati's superbikes have always always grabbed the headlines, but the slightly smaller versions, from the 748 onwards, have actually been at least as much fun, and much more affordable. They typically have even better handling, and while they might miss out on a bit of low down thump and top end power, their revvier nature makes them perfect road bikes, where you can feel like you're really riding them hard rather than just waiting for those odd moments when you can unleash too much performance. The downside in the past has always been high maintenance costs, especially with frequent cambelt changes. That changed with the Panigale engines though, and cam drive is now by chain, which only needs checking every 30,000 miles. A service history is still essential though, either from a Ducati dealer or a dedicated specialist. This is coming straight from a dealer where it's been looked after by them from new, so that's a good start, although at just 5500 miles it's still 2000 miles from its first proper service (and nearly 10,000 miles away from needing its complex Desmo valves checking and adjusting). It's pretty much standard except for the obligatory tail tidy and crash bungs, plus paint protection film.