Today's Good, Bad and Ugly takes a look at three bikes from the Autojumble field at the Stafford show.

"Following our Two Grand Tuesday rumble at the jumble, I thought I'd try and track down some more bikes," Said Scott. "I also found a trio of Japanese classics with slightly larger price tags and bits of sticky tape applied to their flanks." 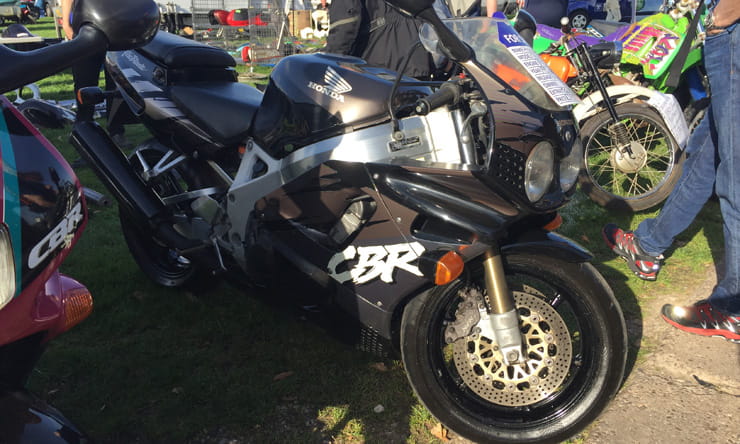 If you’ve never been to an autojumble, you’ve been missing out as there’s always a variety of previously enjoyed bikes to gaze at. I can’t remember the last time that I was face to face with an original flat front Fireblade, let alone one that was available to buy.

There’s been plenty of corporate cooing from Honda about their Fireblade reaching 25 years in production, and rightly so, it’s a model that was a game changer when it first burst on the scenes in 1992.

These early bikes are becoming very desirable, and that’s a trend that will surely continue. The red, white and blue version of the RR-N is the one that many prefer but I think the stealthy black one is the way to go. I wanted to chat to the seller although he was tied up on a rather long phone call and after 15 minutes of waiting I got bored and followed my feet to the next stall.

It had given me plenty of time to poke around the Fireblade and I was pretty pleased with what I saw. The paint work looked to be original, and it still looked pretty damn shiny. Also shining away were the tyres! The seller had gone to town with the back to black also, everything from the switch gears to the seats glistened under the tarting up spray. It was a bit like looking at your parents in the chapel of rest, you couldn’t help but wish he’d not gone so overboard with the aerosol. There was even a standard exhaust end-can that had been fitted, though it did carry a few annoying marks. No doubt the engine would be fine having only covered 36,000 miles, so with an asking price of £2,900 it was fairly priced.

Anorak Fact: Used parts are now getting rare and pricey, expect to pay £500 for a perfect fuel tank in original colours. 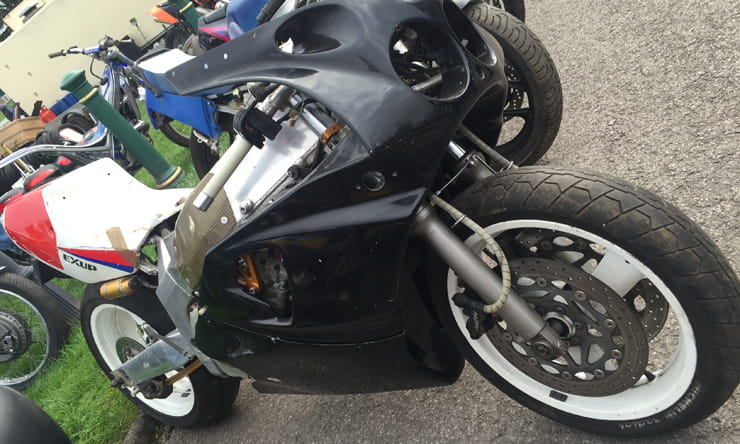 There was no shortage of contenders for the ‘bad’ badge at Stafford, but this Yamaha OW-01 was a clear winner. I say OW-01 but there wasn’t too much of the original bike left! The engine was long gone, instead there was a FZR1000 EX-UP motor fitted; a common conversion back in the day.

There was more of the bike missing than was actually present; the fuel tank, carbs and original fairing had long since left this once cutting edge bike.

For a project that’s had a hard life you’d expect it to carry some paltry figure, sadly not! With a sticker price of £6495 you’d be forgiven for thinking that decimal point had fallen off.

I’m fully aware that prices of mint examples are on the rise, inside the main hall there was a stunner for sale priced at £18,000. Could you pay £6,495 for this hybrid FZR and restore it with the difference in price? Maybe you could, but it would be a gamble trying to find all of those parts from this limited edition sports bike. 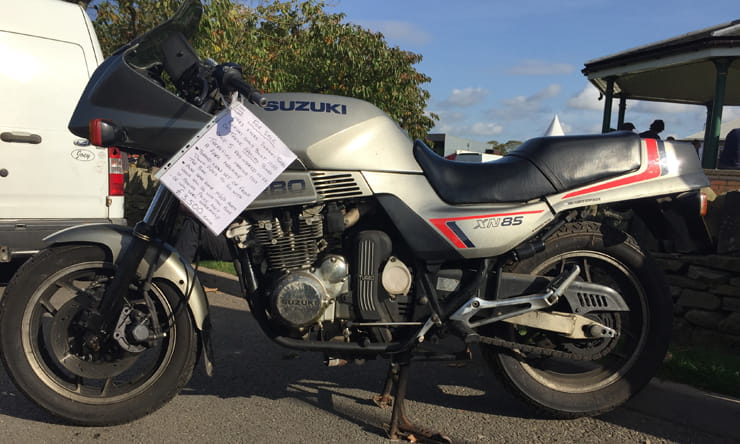 The hand written for sale note boasts that this Suzuki oddity is 1 of only 5 registered in the UK, I wonder why that is?

Of all the factory turbo bikes from the 80s this isn’t the one to have; under that street hawk looking bodywork lurks what’s basically a GS650.

This bike appeared to be complete, and pretty much original, for any restoration project that’s a good starting point. With rare models though there are issues, such as finding good quality used parts let alone trying to buy new bits and bobs.

The invisible seller teases us with the promise of some new old stock spares (original era parts that have never been used) that will accompany the bike should the £3,500 asking be met.

If you’ve always promised yourself an XN-85 then you’re going to cough up big bucks, but if you’re open minded about other models, pay the extra and buy a Kawasaki 750 Turbo instead.

Anorak Fact: The 85 part of the name comes from the bhp that the eight valve air cooled engine pumped out.