Pick of the Ads: The Stafford Autojumble

"This week for Two Grand Tuesday I left the virtual world behind and headed for the autojumble field at the Stafford Classic Show." Said Scottie. "With an assortment of barn finds and rusty relics to choose from, here’s my Good, Bad & Ugly of bikes in the sub 2K price bracket." 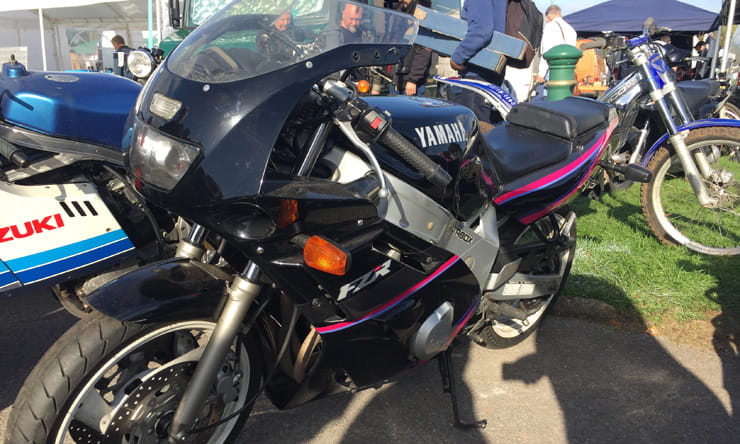 After circling it one way, and then the other I knew I’d discovered the ‘Good’ for this week’s trio. The vendor had gone to town on the sales pitch; the only info offered was a price written in what looked to be a tyre pen.

£750 isn’t too much cash for what once was a hotshot within the competitive 600cc class of the early 1990s. Other than a broken indicator and some fresh scratches that had probably happened in transit on the way to the event, this Yamaha looked very straight for an oldie.

The deeper I looked, the more I started to discover – nothing too terrible, but jobs that would all need doing before it could pass an MoT and be ridden. Fork seals were a weak spot in the day, thankfully the oil that’s passed by the dried-out seals has kept the fork stanchions free from any rusty pitting… there’s always a silver lining.

Mileage was just over 50,000; I could only read that after lifting up the mirrors that had been removed to help squeeze another bike inside the van.

The downpipes looked solid, but without getting the fairing lowers off or starting the bike up you wouldn’t know for sure. Priced at only £750 the FZR600 had no shortage of admirers, but by the end of day one of the show it was still available for purchase. With a bit of time and a few quid there was a decent bike waiting to be woken from its sleep.

Anorak Fact: This model was basically the same as the original twin-headlamp FZR600, it did though come with a 4 inch-wide rear wheel – half an inch wider than the earlier 3HE model. 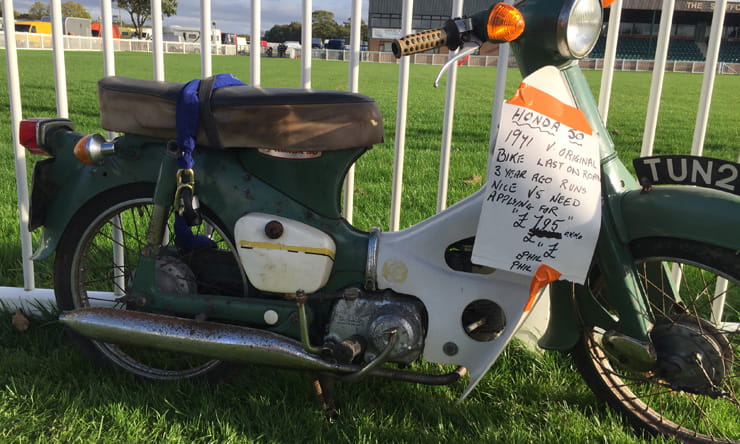 Padlocked to a fence is where I found this old chicken chaser; it was more than likely a private sale that hid within the hoards of trade offerings. These old Honda step-through machines have seen a revival in recent years, which has pulled up prices.

The C90 makes the most sense simply because it offers a bit more go for your dough. With an active custom scene among the fans of the Honda 90, 70 and 50 models, many have been modified by people with big ideas and large wallets.

The hand-written blurb that had been cable-tied to the leg shields helped to shed some light on the bikes recent history… It’s been laid up for the last three years, but no reason was given why.

With a couple of mobile numbers to dial and a price tag of £795, that rounded off the hard sell.

The C50 looked pretty original, and I must have walked past plenty of step-through parts laid out in the autojumble; if you wanted a cheap project then this is typical of what you could easily buy on impulse. With a healthy parts scene and not too many moving parts it would be a decent winter project. If only it was a bit cheaper.

Anorak Fact: The sky is the limit for pimping a step thru; everything from big bore kits and flat slide carbs, to fat wheels and piggy-back shocks. 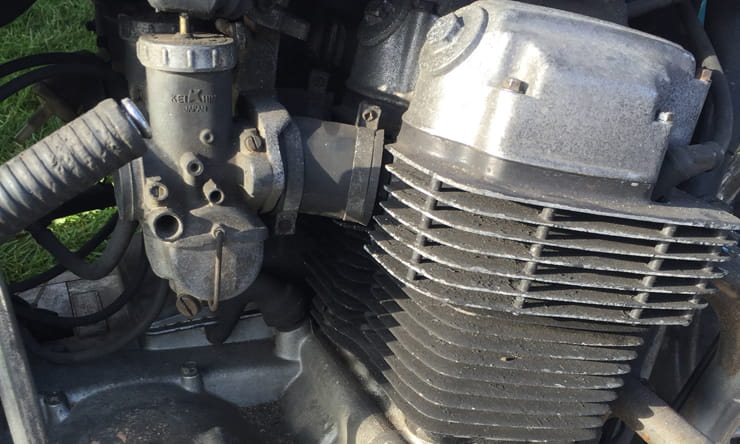 There’s an old rumour that some traders add a few quid to their asking prices simply because it’s Stafford; S.A.T stands for Stafford Added Tax. This may well have been applied to this crusty old Honda CB750F1.

n the words of the seller it’s virtually standard and complete, which means this must have been the rare Honda CB750 that was fitted with an exhaust from a Suzuki GSX model!

The CB750F1 was a model that arrived in the UK towards the end of the run for the single overhead-cam engine; there was an F2 version that used comstar rims and had black paint on the engine. At this point Honda had a double overhead-cam engined model to carry the CB bloodline.

These early single-cam engines are very popular with custom bike builders, mostly for their clean lines rather than any performance abilities.

They are also a popular base for a café racer build, but this one is probably best as a source of parts. Left to rust in peace since 2010, it would be a brave soul that took it seriously as a restoration project.

The £995 asking price is only a starting point, the joy of any autojumble purchase means as the event goes on the price can only go down – the total opposite to the eBay auction world where buyers push the price up.

Anorak Fact: Honda created a few specials around the CB750F1/F2 – the Honda Britain 750 is a very sought after model.