The BMW R 1200 C is one of motorcycling’s oddities. At the time of 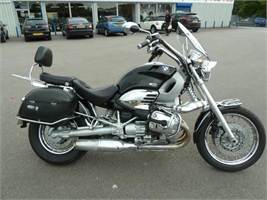 first production, 1997, it was considered by many as a joke – a flat-twin-powered BMW custom bike went against the grain of slim, attractive, chopped-down, personalised American V-twins. But that was then. It is still considered an oddity today but only because you very rarely see them on the road. The R 1200 C’s styling was very hit or miss with customers then, but if BMW saw fit to reintroduce with the latest powerhouse engine it would be bang up to date, comparable even to other big performance customs like Ducati’s Diavel and Triumph’s Rocket III. To be fair to BMW, the R 1200 C was and still is a good bike. What you have to remember is its chassis and 1170cc engine are both based on GS and other BMW touring bikes of the time. So no real worries in those departments even with high mileage examples – most BMW owners don’t consider 30,000 miles as high mileage. To ride the R 1200 C is strange at first; you’re canted backwards a la custom style and the bars are tall. Get over this and the bike rides pretty much like every other Telelever front suspended BMW – vague feedback from the front end especially at speed. Not that it counts if you’re buying but the R 1200 C holds its value very well. Dare to be different?