Pick of the Ads: The Stafford Auction

Today's Good, Bad and Ugly takes a look at three bikes from the Bonhams' auction catalogue.

"If you’ve got a few quid kicking around and you’re after buying a classic motorcycle, then head along to Stafford for the Bonhams Autumn Sale." Said Scott. "We were lucky enough to get our hands on a sales catalogue for the event this Sunday and took our turns daydreaming about what we’d like to buy. Here’s this week’s GBU from the pick of the lots." 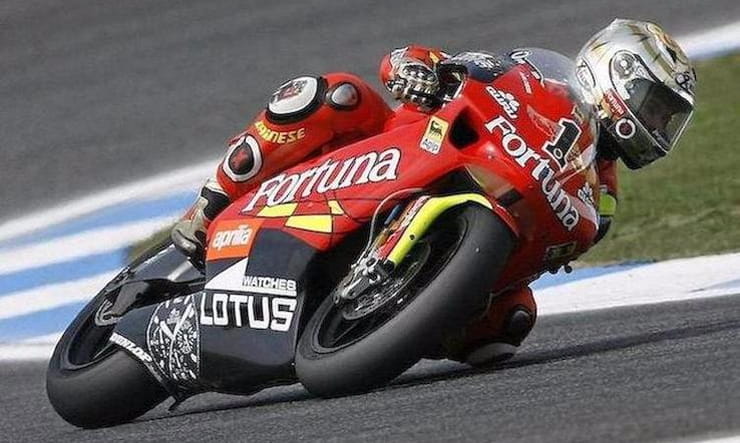 You won’t get the opportunity to bid/buy on a pukka GP bike that often, even rarer is a bike that comes to market with a proven provenance, the fact that it’s been ridden by a world champion is also very desirable.

Unused since 2007 this Aprilia 250 is going to generate lots of interest at the Bonhams auction this Sunday.

Jorge Lorenzo scooped his second 250cc GP in 2007, winning nine races along the way he lifted the championship with a very healthy 52-point lead. The current owner is now passing the bike on after owning it for 10 years. During his custody the bike appears to have had an easy retirement and it’s not been ridden, it’s offered in ‘as last raced’ condition.

This is such a unique bike it’s practically impossible to stick a value on it, chuck in the excitement of an auction and if two or more people lock horns this could go crazy. Bonhams offer a guide price of between £100,000 to £140,000! This is without doubt the bike of the sale.

Anorak Fact: Lorenzo made his racing debut on the 4th May 2002 in the 125GP Spanish GP. It was also his 15th birthday. 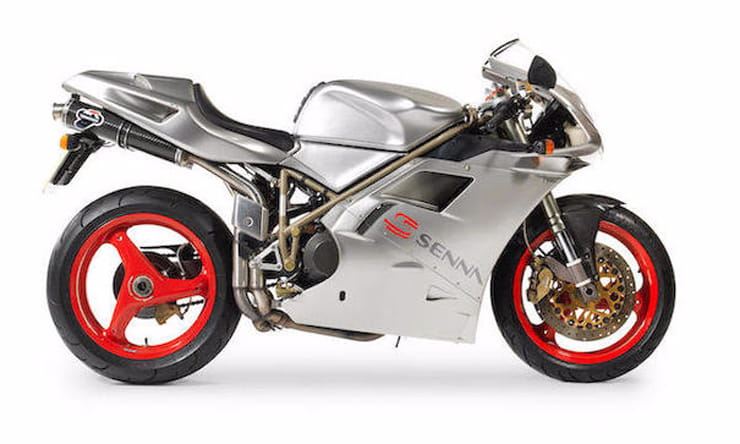 Many people have an image of what a Bonhams motorcycle auction entails, this usually involves historical British bikes from over the last 100 years or so. Sure there’s plenty of fascinating finds from a bygone age but there’s also a very healthy selection of emerging and modern classics going under the hammer at Bonhams these days. This is a perfect example, a Ducati 916 Senna II. Ducati are pretty expert at building limited edition runs, their latest Panigale 1299R Final Edition will no doubt be a collector’s item in time.

The late great Ayrton Senna was a Ducati fan, he owned an 851 and was pretty chummy with the Castiglioni brothers, keepers of the keys at Ducati during the 90s. There were three versions of the Senna model, lot 218 is a mark two version.

This bike is pretty unique by being a one owner bike, it even comes with the original bill of sale too. Other than an alarm and a few carbon treats it’s a stocker. Included in the sale is the original cover, toolkit and owner’s handbook, all of which are very nice to have.

There was only 300 of each incarnation produced, this is number 162 for the Senna II run, away from the different paint there wasn’t too much different between the Senna and other pimped up 916 models.

Being a rare and desirable model means that it’s tough to value, to give us a clue Bonhams offer a guide price, this suggests somewhere between £12,000 and £16,000.

Anorak Fact: The Senna series each had a distinctive grey based paint job, the shade changed with each model run. 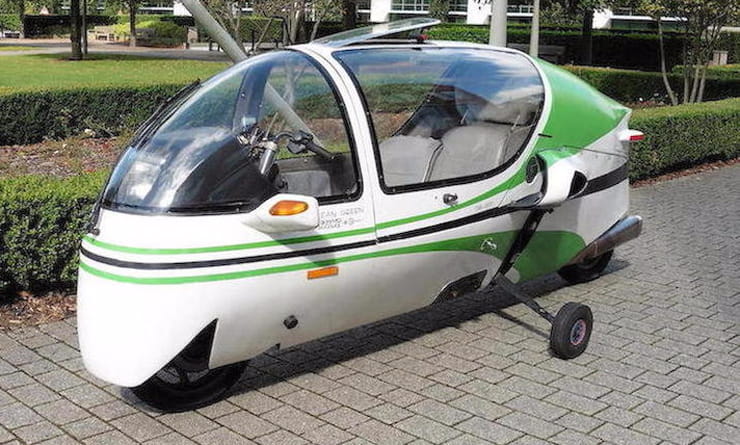 No, I’ve never heard of one either. This step towards the future was ultimately an answer to a question that nobody had ever asked, which probably explains why only 89 were ever built.

Underneath what looks like to be a pod from the London Eye there’s the meat and potatoes from a BMW K100. The K100 gave up its engine, gearbox, forks and controls.

This machine ended up in Canada, but sadly it breached their rules about the height of motorcycle seats! It was then left unloved and unused for 18 years before the second owner brought it to the UK and recommissioned it.

The Bonhams blurb reveals that there are a total of five Eco mobiles alive and well in the UK.

If you are tempted to put your paddle up and bid, please be aware that it takes around five days to master how to control this quirky beast. The current owner is happy to teach you! The guide price is set between £12,000 and £15,000.

Anorak Fact: The Eco mobile is geared for 150mph, check that the landing gear is up first!