How to ride in the city: 10 safety tips 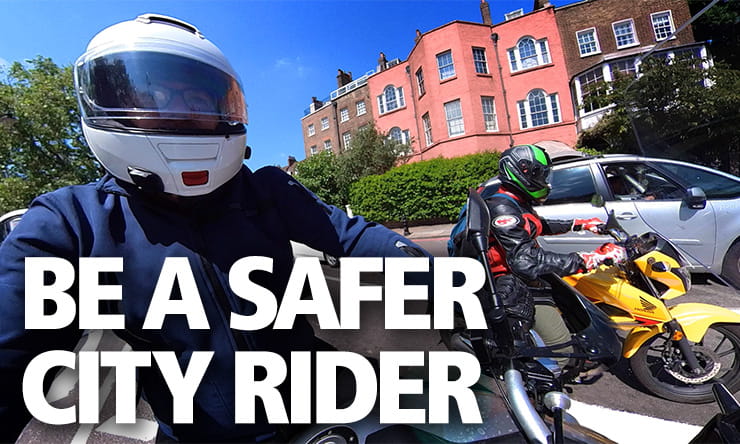 Riding in the city; it’s easy, right? No fast bends to mess up your lines, and speeds are a lot slower on the commute to work, so what’s the problem? While you’re riding on that commute there’s a question you’ve got to ask yourself: What’s the net gain of any manoeuvre… what’s the risk versus the reward?

I’m Dave Yorke, ex-Merseyside motorcycle police sergeant, and I've just got back from riding through London with BikeSocial Member Dwayne Grizzle. For your chance to be part of experiences like this – and for hundreds of offers, competitions and training opportunities – check out join.bikesocial.co.uk

Tip 1: The importance of observation in the city

On the open road we’d be looking at limit points, looking for cross views, overtaking opportunities, hazards like junctions and road surface conditions.

In the city we’ll be doing similar, although maybe not the limit point bit. We’ll be looking for things that in reality are the same, it’s just that it’ll be happening at slower speeds. We still need to be looking for pedestrians, cyclists, other motorcycles and vehicles, along with the road layout ahead.

Although it’s slower, there’s so much more happening and you need to lift your vision – lift where you’re looking to see what might affect you – and be ready to do something about it. When you see something, have a plan on what you’re going to do with the info. There’s no point seeing it if you’re not going to do anything about it.

Take traffic lights, for instance; the first thing I think about when I see a green traffic light is that it’s going to – at some point – turn red. If that’s your thought train, it’s easy to stop when they change.

Refuse collections, delivery vans, taxis – they all make manoeuvres that have pedestrians associated with them. Pedestrians who can very quickly be in the road.

The elevated line of sight that sitting on a bike gives is almost like x-ray vision, so use it to look ahead. It’s bit like the vanishing point in progressive road riding; looking for obstacles at every opportunity and if you find that there’s too much information to deal with then you’re probably going too fast.

There’s no point sitting in exactly the same position in the road for your entire commute. There’s nothing to say that just because you’re on a motorbike you have to nail every possible filter opportunity but it makes sense – say if you’re travelling behind a car or van – to move around in their mirrors: your headlight in different mirrors will remind the driver that you’re there.

Other than that, look at possible hazards and try to be as far away from them as possible, without going too near another hazard. 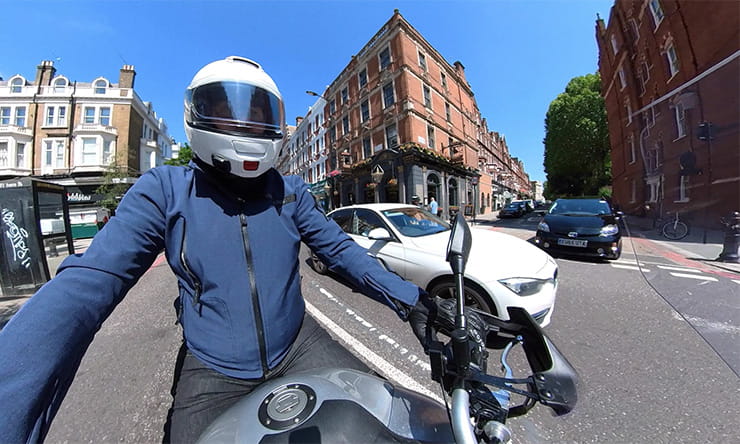 You’re either going past them, coming out or them or going into them.

Our knowledge of the route if we’re commuting regularly is going to alter our perception of a junction; if it’s a quiet residential street that traffic hardly ever comes from then the very fact that you know that is already a bonus. Still, don’t be blasé; just think about where you are and what you would do if something happened.

At junctions where you’re waiting to pull out, make sure the vehicle in front has gone before you move. I’ve seen it where someone thinks the gap is big enough to go for, but the person in front doesn’t, with the inevitable consequences of a rear-end collision. Rear-enders happen both to us, and by us riders, so it’s worth remembering that if you aren’t in pole position, the gap in traffic isn’t yours to take.

The big one though is cars and vans doing the same to motorbikes, where the results are much different. An eye in the mirror for approaching traffic behind might give you a chance for reaction, and leaving a gap between you and the vehicle in front will allow some movement to that reaction.

On the commute or just riding in the city, think whether other road users have seen you; look at their approach to a junction. Drivers sometimes don’t see us because they haven’t looked hard enough or we’re hidden behind something at the exact point that they don’t look hard enough.

Larger junctions, or rather their signs, can act like a limit point. A busy junction ahead will be well signposted and you’ll either know the layout or you’ll be approaching it for the first time. Either way, knowing which is the correct lane to be in makes for the easiest progress. You might think that to approach on the furthest offside lane is good for a quick getaway as it lets you cut across the traffic for the first exit – and you might get away with it – but there will be a time you don’t. The risk is just too much for the reward.

Let them get on with it.

Say you’re on the commute and in an average speed camera zone or managed motorway, the traffic is busy but moving freely so filtering is out and you’ve got some nugget right behind you, way too close. If you can, just get out of their way. Let them get on with whatever they’re doing, hopefully they’ll get caught, or if you’ve got a dashcam get them dealt with by the police before they hurt someone.

There’s no need to retaliate and get involved, although it’s okay to mutter your expletive of choice in your helmet as they go past. Mine begins with P. 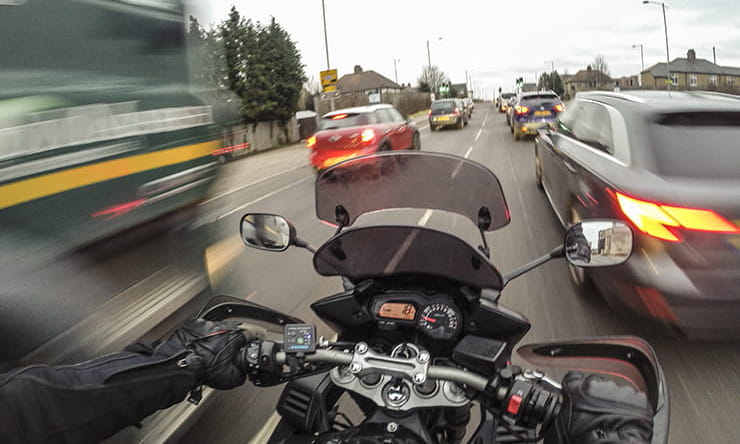 Tip 5: Is filtering legal in the UK?

Of course filtering is legal in the UK,  but it’s your choice whether to do it or not.

Lots of people talk about a centre filter, and an overtake along the offside of stationary traffic as if they’re the same thing, but they’re a bit different. In both cases though it’s best to think about the possibilities of what can happen; sorry to sound glum but if we think about what can happen then we can ride to anticipate it, so think lane changes, un-indicated darts into junctions, people pulling out of junctions. And in the city it’s all mixed in with pedestrians.

There’s lots of talk on the internet about the correct speed to filter but in realty what you need is a realistic appraisal of what’s happening. Travelling so fast so that you can’t react is just that; too fast

Overtaking along the offside brings the same problems with junctions and pedestrians, along with the added spice of being left on the wrong side of the road if you haven’t identified somewhere to land; it’s a bit risky leaving the back end of the bike sticking out into opposing traffic

Forget the blame side of things, think about the possibility of injury. Risk versus reward

Oh, and keep an eye out for other bikes behind you. You might be struggling with a filter because you’ve got panniers or whatever, but the small bike behind won’t be so move over and let them continue.

Tip 6: What to know about traffic lights

Watch out for lanes with separate traffic lights controlling a filter lane to the left or right. If you use one of those lanes to gain an advantage to the front and then accelerate into the straight-ahead when the lights turn green lane you commit a red-light offence if the filter lane lights haven’t changed.

Stop-line and advance stop-line offences are red-light offences. The only reason to stop in an advanced stop line area, which are reserved for cyclists, is when you have already crossed the first stop line and not crossed the second before the traffic lights turn red. We’ll deal with cyclists later. 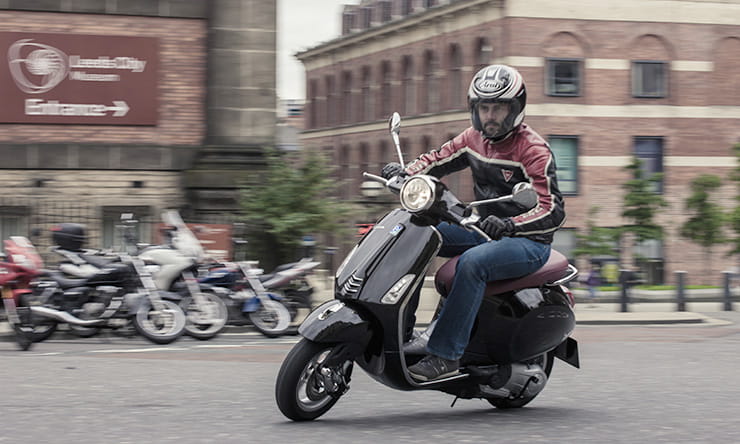 Tip 7: Can I use a bus lane on a motorcycle?

Know where you can use a bus lane and more importantly, where you can’t. Bus lane signs will have a motorcyclist contained within them if you’re allowed in it. It’s a super-easy way to make lots of ground in the city, lots of reward for no more than normal risks, but be aware that in London, for instance, some areas allow it and some don’t.

Tip 8: How to treat cyclists

Don’t take anything for granted from cyclists. While some have invested heavily in cycling and take real pride in it, others see it as simply a cheap means of transport and don’t ride anywhere near enough. And cyclists haven’t had to take a test, so you don’t know if they’ve reached a proficient level. Give them space and share the road.

Don’t get wound up by them going faster than you in a 20mph area, get a pedal cycle if it bothers you that much but then also get sweaty on the journey. There are pros and cons to it, but I’d rather have an electric scooter for the 25-mile commute.

Complain to the police if they jump red lights, but just continue with your ride; it’s your ride that matters 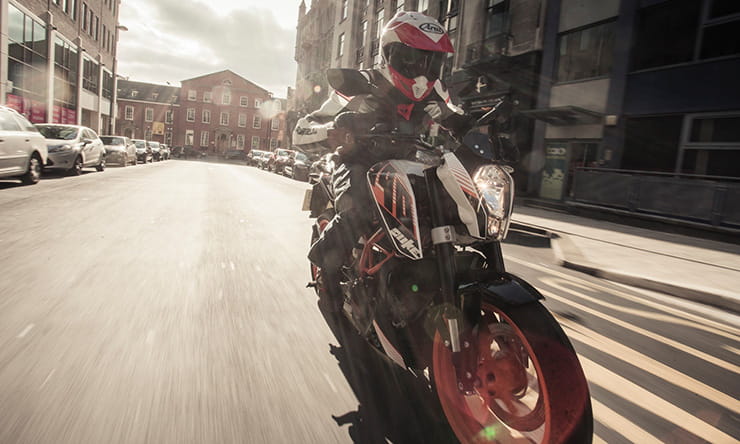 Tip 9: Give yourself time

Give yourself plenty of time and remember that most commutes take a set time. If it normally takes 45 mins then the chances are that no matter how fast you ride or how many risks you take, it will still take around 45 mins.

If you’re late, resign yourself to being late and just ride as normal. Use the time to come up with a good excuse to your boss!

I used to have regular requalification rides to keep up my advanced police qualification, and I went out for a ride with my old instructor few weeks ago for an un-biased opinion on my riding; it doesn’t matter how experienced you are, there’s always more to learn that will make your rides not only safer, but more enjoyable and even potentially faster.

Remember that BikeSocial members can get some great discounts on a wide range of training for all levels at join.bikesocial.co.uk, so take every opportunity you can…

How to ride in the city