How do you keep a motorcycle safe? Best bike security 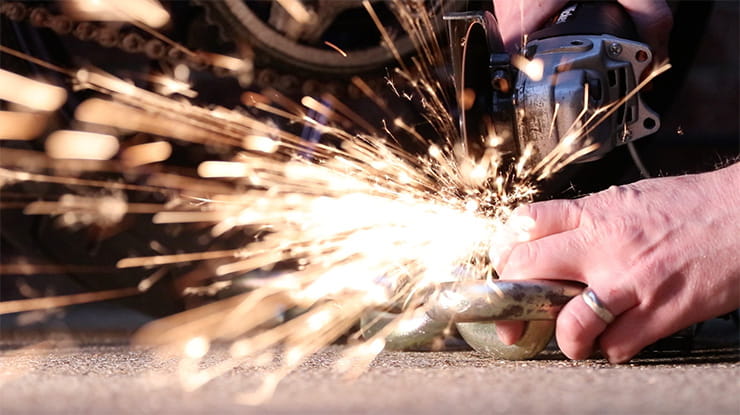 Criminals aren’t lazy; they’ll work surprisingly hard to find ways around security, so how do you keep a motorcycle safe? With portable angle grinders so readily available (and DeWalt launching a new 54V version), what’s the point in having the strongest lock when crooks will just cut through it?

Electronic security is a good example of how hard criminals can work – a few years ago, the immobilisers in cars and vans (tied to ever-more complex ECUs), not to mention keyless ignition systems, seemed like the answer to theft. Sadly, it’s now all too easy to buy OBD-based key reprogrammers online, and unless your car’s keyless fob is in a RFID pouch, crooks can invest in the equipment needed to pull the signal through the wall.

So they’re not lazy.

But they are risk-averse.

Despite the sensationalist and popularist tabloid news stories that feed on our fear of crime, the rise in the use of electronic security hasn’t seen the expected increase in home invasions.

Almost 20 years ago, I visited a Metropolitan Police stolen vehicle compound – ex-Flying Squad officer and BikeSocial’s crime expert Dr Ken German was working there. The fear at that time, with increased fitting of immobilisers, was that there’d be more violent burglaries and muggings to get people’s keys. What actually happened was the development of code grabbers that would capture your remote locking signal as you pressed the fob.

After that, key fobs started using rolling codes. The criminals switched to jammers; a driver would find they couldn’t lock their car doors, figure the fob’s battery was flat so go into the shops to buy another. While they were gone, the crooks would hop into the car and use an OBD-based device to start it and drive away. Or they might even use an opportunity where they have access to the vehicle – for instance as a valet – clone the keys with kit that’s readily available, get the driver’s postcode (maybe through the offer of a loyalty scheme), then pick the car up whenever it suits them. 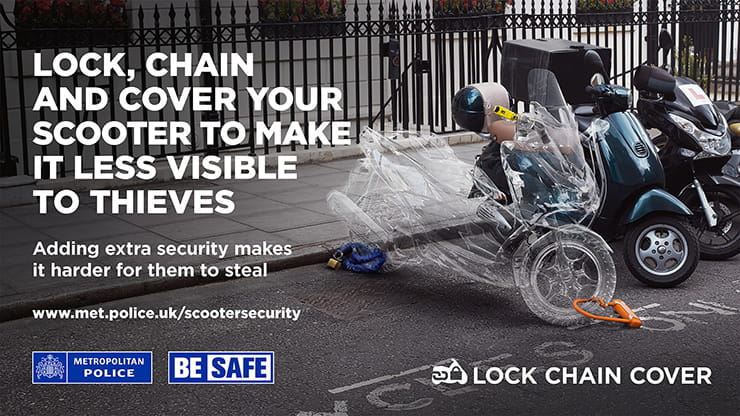 The Met’s Lock, Chain, Cover campaign highlights the need for a layered approach to security

So what’s the answer?

A couple of years ago, a major courier company was having six of its fully-liveried vans stolen every month. They spoke to various companies about the latest high-tech systems, but it was the Met police that gave the advice; “Fit steering wheel locks, and write it into the drivers’ contracts that they have to be used at night.”

In the next year, the company had just one van stolen, and it was found at the end of the road, just before a bend; the thief couldn’t get the lock off.

For motorcyclists, this means that hard security – a decent physical lock – is very important. If your bike’s chained up, and another isn’t, the criminals will go for the easier, less risky target. While some of them won’t be afraid to turn to violence, they typically follow the same rules as most natural predators… they’ll attack the weakest target.

How do I know which lock I should use?

The best lock is the one you have with you, so if you need to carry it on your bike, look for something portable. And buy the best you can afford; don’t be surprised if your £30,000 sportsbike is stolen when you only have a length of anchor chain.

You can find advice on the best chains and locks by price, weight and resistance to angle-grinder attack by clicking here.

Look for Sold Secure-approved products, and be aware of the different categories; make sure you check carefully that the product is approved for motorcycle or motor scooter use, not bicycle (some manufacturers have accidentally forgotten to put the intended use on the packaging in the past).

Sold Secure, administered by the Master Locksmiths Association, tests using the latest criminal techniques, as advised by the National Police Chiefs’ Council (formerly the Association of Chief Police Officers). Every product has to be retested yearly – it’s a major investment for the product’s manufacturers, but it’s also your guarantee of the highest levels of resistance to attack.

Sold Secure’s close relationship with the police is why the Motorcycle Diamond approval includes attack by angle grinder, and it’s why products that successfully pass Sold Secure testing automatically fall under the police’s own Secured By Design scheme.

You’ll likely find older products with Thatcham security ratings, but while the leading electronic devices like trackers and alarms do carry a Thatcham rating, the company no longer tests hard security.

How important is a good padlock?

It’s very important – it’s quite literally the final link in your chain. Padlocks for motorcycle use should have a protected shackle, which means the body of the lock extends as far around the shackle as possible, while still allowing you to get the chain in and out – the tighter the fit, the harder it is to get an angle grinder into it.

Many of the very best chains on the market use Squire padlocks – particularly the SS80CS, which in our testing was tougher than even the most heavyweight chains.

Also look for a cover for the key way, to keep any dirt and water out of the lock barrel. You can find out more about using and caring for motorcycle security kit here. 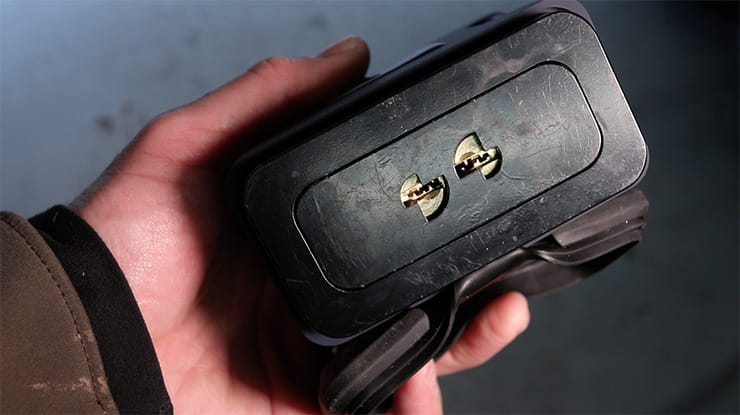 “But I’ve seen people pick padlocks in seconds on YouTube”

Picking a lock is an art – it takes patience and a very real skill. There are some highly practiced people who can pick a surprising number of locks, but that’s under clean, comfortable, controlled conditions. And they really are few and far between; don’t believe everything you see on YouTube; if you have the key to a lock, it’s easy to disassemble it, remove several of the tumbler pins, then put it back together, ready for your ‘impressive’ show of on-camera lock-picking skills.

In real motorcycle crime scenarios, lock picking simply isn’t a real issue. But beware of cheap locks – besides potentially offering a much lower resistance to attack, they can have shockingly limited key combinations.

A good quality padlock must also have high levels of resistance to a drill attack – it’s no good having a barrel that’s hard to pick if it can be quickly drilled or pulled out. Again, the best padlocks, like the Squire SS80 for instance, are extremely hard to penetrate, and far exceed the abilities of any security chain. But for some commercial building use for instance, a determined attack using specialist tools can become a real threat; it’s why Squire is launching the SS100, which is even bigger than the SS80, and has two key barrels; double the time to drill or pick.

Can I make my motorcycle impossible to steal?

Sadly not – if a criminal is determined to steal YOUR bike, they will try very hard, and anything can be defeated, given enough time. This is why security needs to be multi-layered – a cover to keep your bike out of sight (if you don’t have a garage), hard security to deter all but the most determined thieves, and a tracker – a good one will alert the owner that the bike’s being tampered with, and with a subscription comes a 24/7 secure operating centre that will track the bike in real time and work with the police; in the majority of cases getting it back in just a few hours (sometimes along with the thieves, who are caught in the act).

How much should I spend on security?

Consider decent security a real investment; buy a quality chain and padlock and it’ll last you a lifetime. A chain has no moving parts, so should last forever, while a padlock – if built well – will need minimal care to keep it operating for decades and beyond.

Bennetts Insurance customers can also get exclusive and substantial discounts on security products by visiting bennetts.co.uk/rewards.

Inside the Squire factory

British engineering is thriving in the motorcycle security industry, not least with Squire producing locks that are used in its own Sold Secure Diamond-approved kit, as well as that of other manufacturers like Pragmasis and Almax.

1850s: Squire supplies lever locks to the British army during the Crimean war.

Late 1800s: Squire supplies a range of locks throughout the British Empire.

1906: Henry Squire and Sons Ltd is registered as a business.

1920s: Squire stops making cabinet and door locks to concentrate on padlocks and other hardware.

1954: Squire launches the ‘Old English’ and ‘Laminated’ range of padlocks.

1968: Squire is the UK’s first hardware company to blister pack its products.

1969: Squire builds a new warehouse to cope with global demand.

1970s: Squire grows to a workforce of 350 to cope with demand, and launches the high-security ‘Defiant’ padlock.

2000s: Squire moves to a new modern facility in Featherstone, Wolverhampton. ISO14001 Environmental accreditation is achieved, a new range of high-security door cylinders is launched along with the ‘CP’ heavy-duty padlocks, and a joint venture is launched in China to increase production of some of the range.

2012: The ‘Stronghold’ range of high-security padlocks are the first to be LPCB (Loss Prevention Certification Board) approved.

2019: Squire launches the SS100, taking the title for the world’s strongest production padlock from its own SS80. 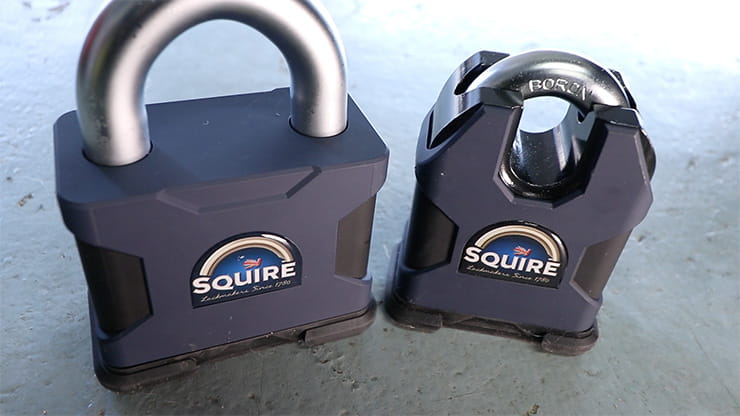 The SS100 shown here next to an SS80 is a pre-production version that has an unprotected shackle – this one’s more likely to be used in building security.