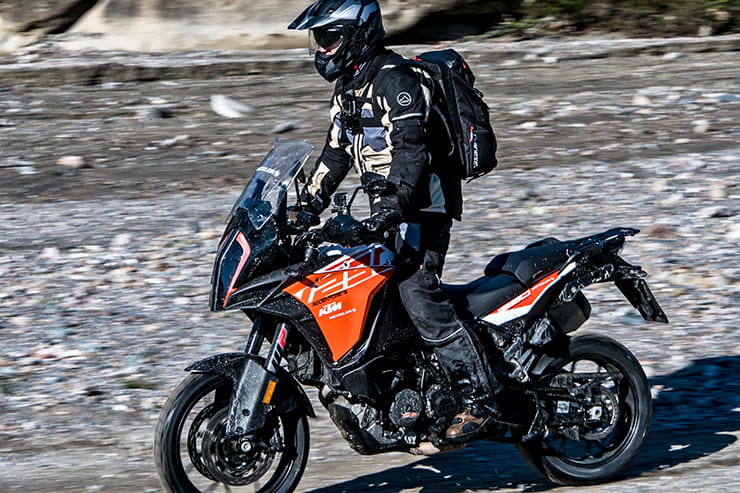 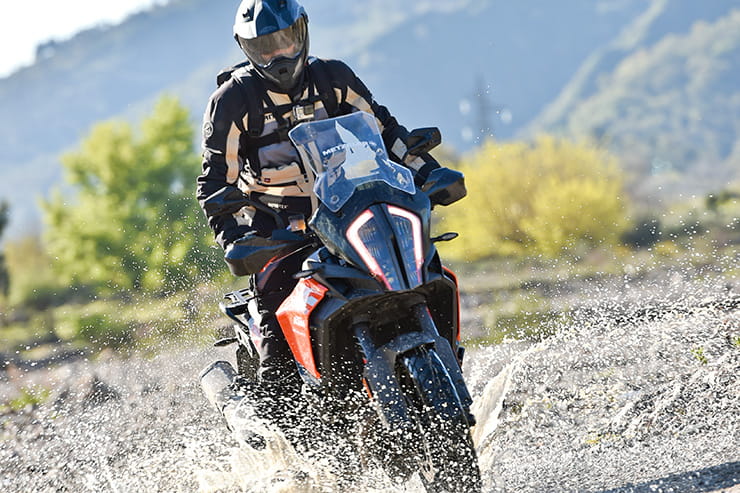 The 3-in-1 Dane Limfjord 2 jacket has a removable and windproof and breathable Gore-Tex inner jacket, along with a detachable thermal lining.

I’ve been testing this, and the matching pants, over 700 miles both on and off road. The Limfjord is classed as a summer jacket, with a layered system that  makes it more versatile when riding in warmer temperatures.

Unlike a laminated jacket, if riding in the rain, water is absorbed into the outer then stopped at the liner. The disadvantage is the jacket remains wet until it can be dried, but you have far more choice with the amount of ventilation. As I was riding in Spain, Sicily and the Moroccan desert, I was less worried about torrential rain, though in Sicily – at the top of snow-capped Mount Etna – the ambient temperature was seven degrees celcius, yet I was comfortable without the thermal base layer, but the large air vents closed. At the base of the volcano – in the sunshine – the temperature was 20 degrees celcius, so I simply opened the pocket air vents and was happy as Larry. 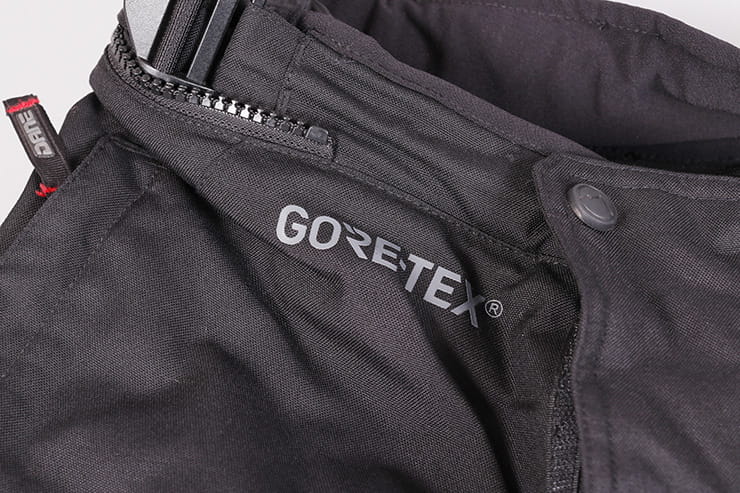 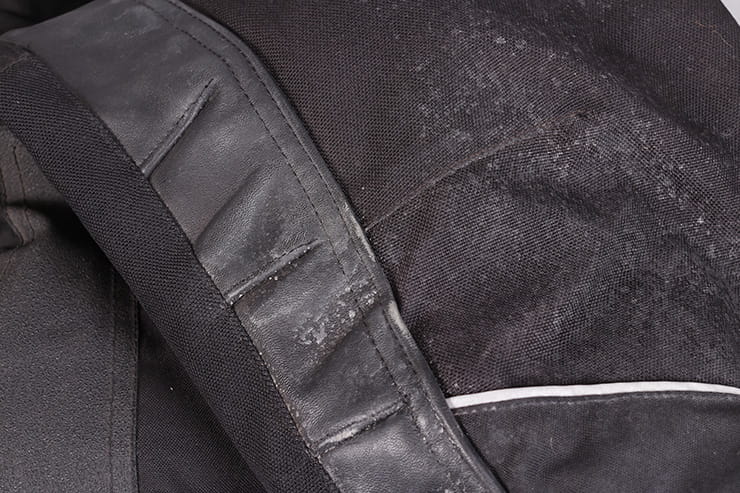 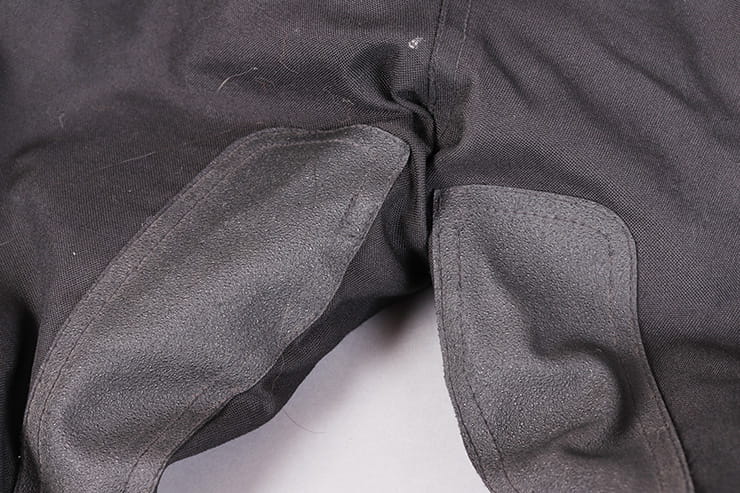 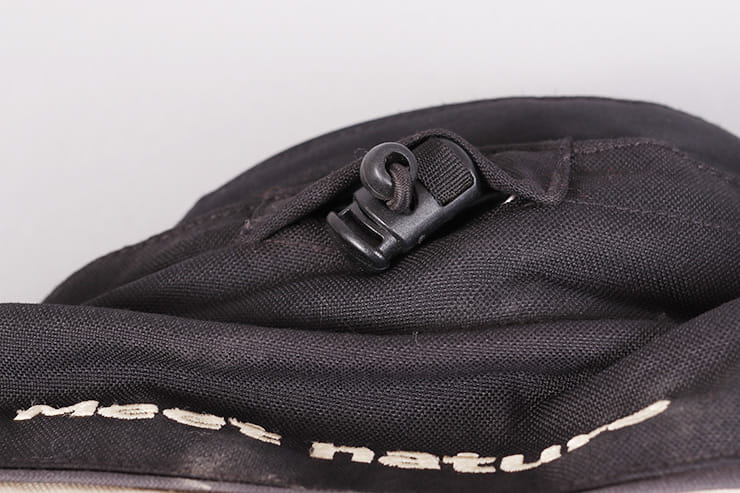 This is a Gore-Tex textile jacket (and pants) made of 85% polymide, and sections of 1000D Invista cordura, for increased durability.

The armour is comfortable because it moulds to the shape of the areas it’s covering, making it less noticeable than some harder armour. The  back protector  can be removed. 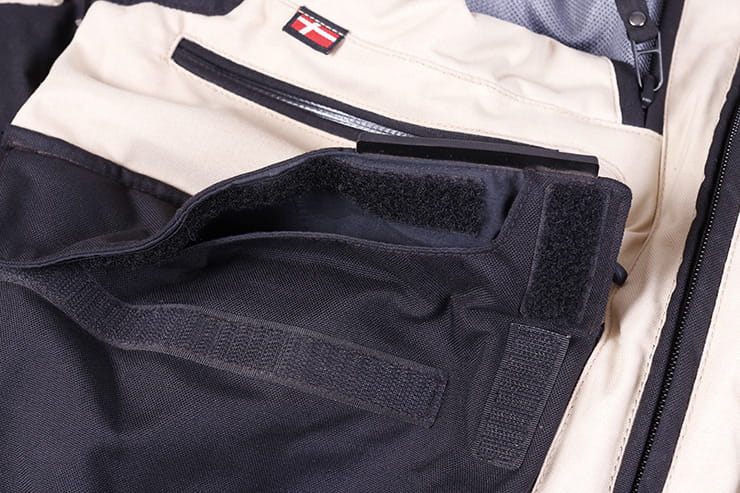 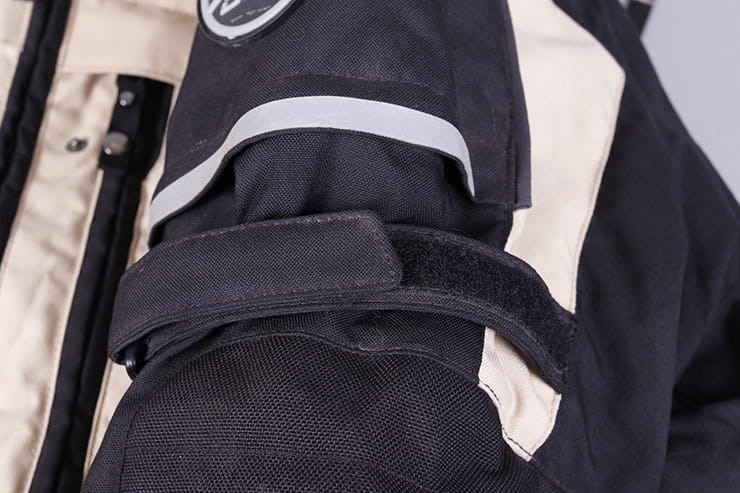 The thermal and Gore-Tex liners are easy to attach and remove, zipping easily in and out of the jacket in seconds.

With the liners removed you can see the breathable mesh that keeps the interior comfortable when the temperature rises. When the large air vent pockets are open you can feel the air flow through the jacket. I have a medium build with 44-inch chest and 34-inch waist. This jacket in size 56 fits me like a glove and is really comfortable.

In Morocco the temperature was varied – really cold in the morning and evening. There was hot sun during the day (with high winds one day and snow-capped mountains the next).

Riding off road always builds a sweat so the gear needed to cope with all seasons in a day. I was warm with the liners in the jacket in the morning, evening and among the snow peaks. I was comfortable in the heat with the liners removed and the air vents wide open. Fine tuning could be made along the way by opening or closing the large pocket vents.

After riding, when walking into town to grab dinner I wore the liner as a stand-alone jacket with my jeans. 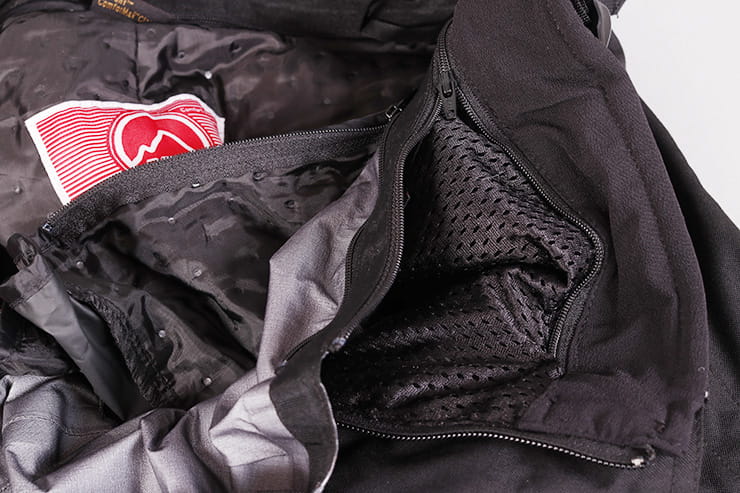 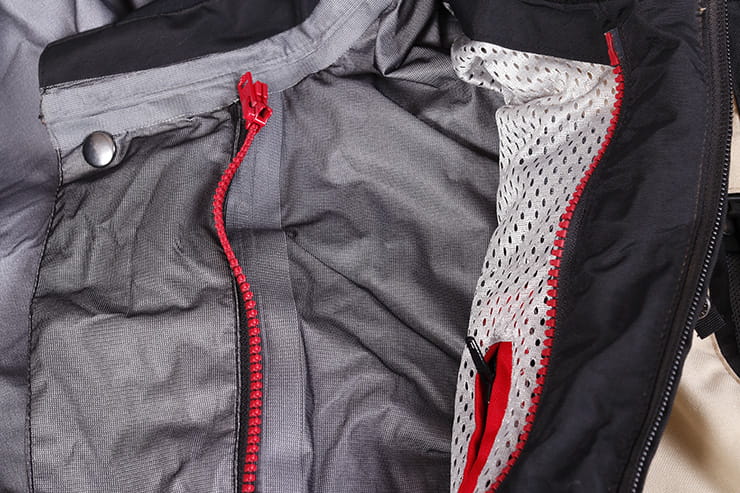 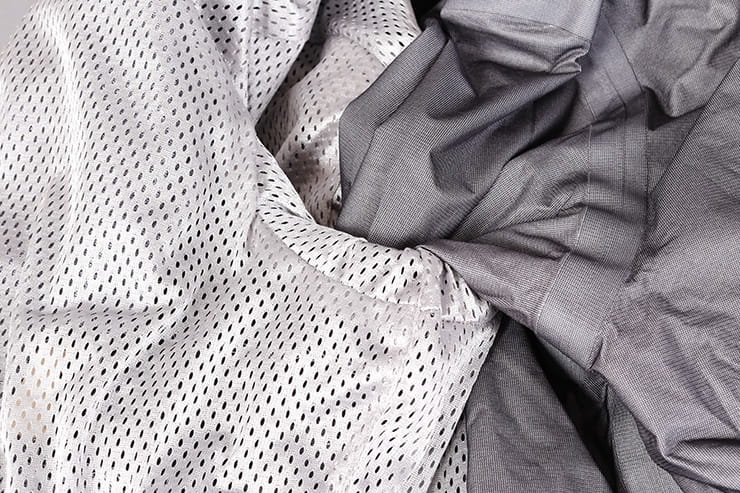 The jacket is equipped with a zip that can be zipped to the pants, the same way a two-piece leather suit can. I was unsure so initially never used the zip. I then realised that the zip also acts like a set of braces. When zipped it keeps the pants from sliding down. I found this far more comfortable when zipped. It took seconds at the coffee and lunch stops to unzip and remove the jacket.

The soft collar is fully adjustable. It was comfortable against my neck and for an optimum fit it can be fine-tuned with an elasticated cord that stows out of the way so it does not flap about in the wind.

There is no storm cuff like the Dane Torben jacket, instead the focus is on extra ventilation. There is an air vent that can be opened or closed from either side of the zip. The cuff’s Velcro has the option of three positions, giving you more options for ventilation and glove sizes. 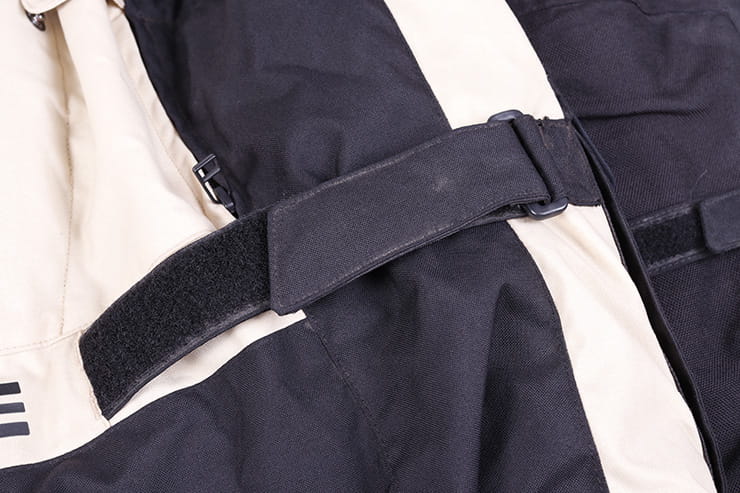 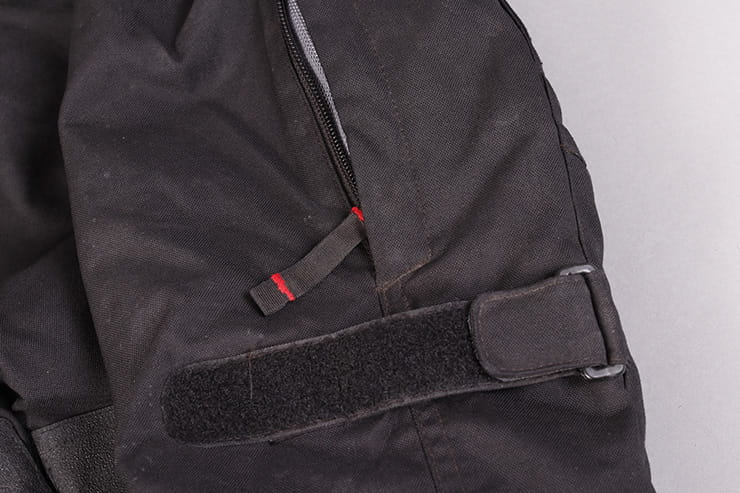 You have a Velcro adjusted waist belt and inside the jacket there is a groin belt. This is nicely tucked away in the back lining when not in use. This strap sits between your legs and clips on to a loop inside the front of the jacket. The purpose is to keep the jacket pulled down when riding. In a more upright position, riding bikes like the Africa Twin and the GS I had no need for the strap. When I was riding the VFR800, and was tucked more into a sports bike position, I tried the strap and it was useful. The jacket stayed nicely in place and never rode up my back.

There are elasticated draw strings on the lower skirt so you can fine tune and keep the wind from entering.

The jacket has two unique chest pockets with zips either side; unzipped you can roll the pocket away leaving a large mesh ventilation system that is really effective. When these are being used as air vents they lose their pocket function. When zipped up the pockets are really deep and run almost into the base.

The pants have the same large vent system on the front of the legs. When you fold the pockets back the flaps are held in place magnetically.

On the outside there are two large pockets, they have fold-over rain flaps and fasten with sturdy Velcro. They are big enough to carry a compact camera, a couple of GoPros and batteries in each. A nice touch is the rubber grip added to the opening edge, which makes it easier to find and open the pocket, especially when wearing gloves. 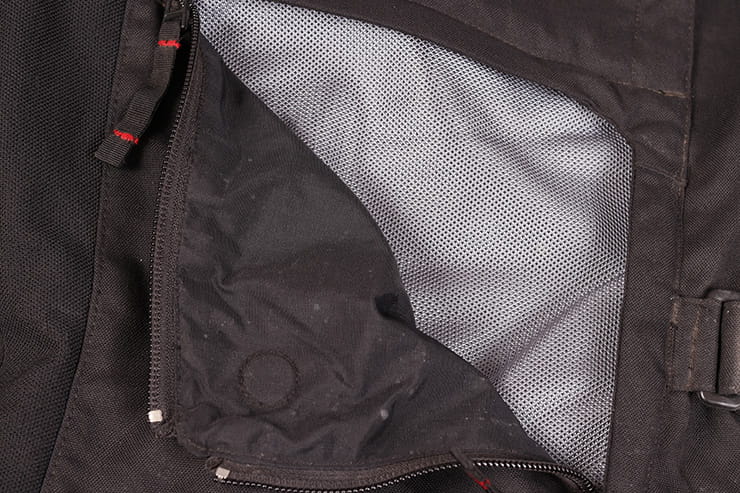 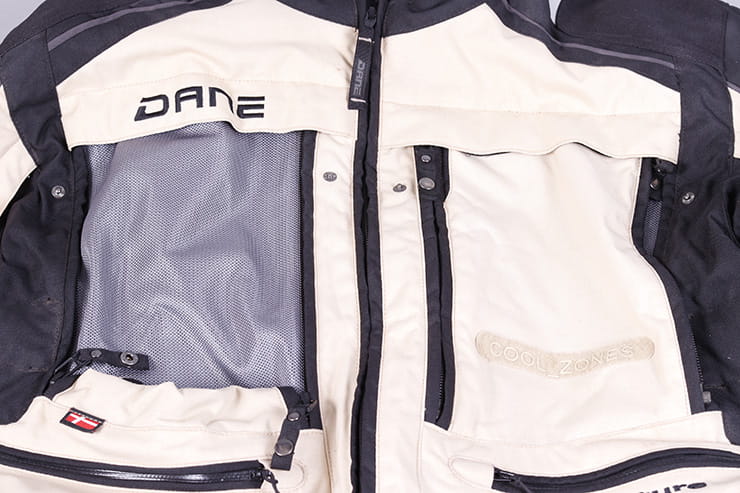 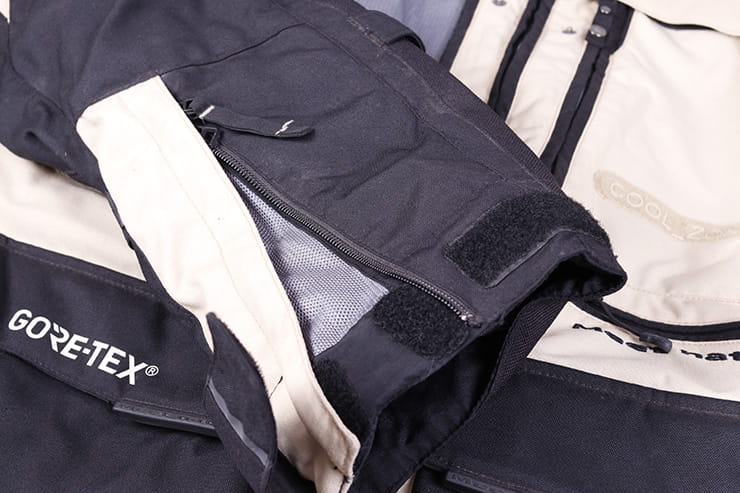 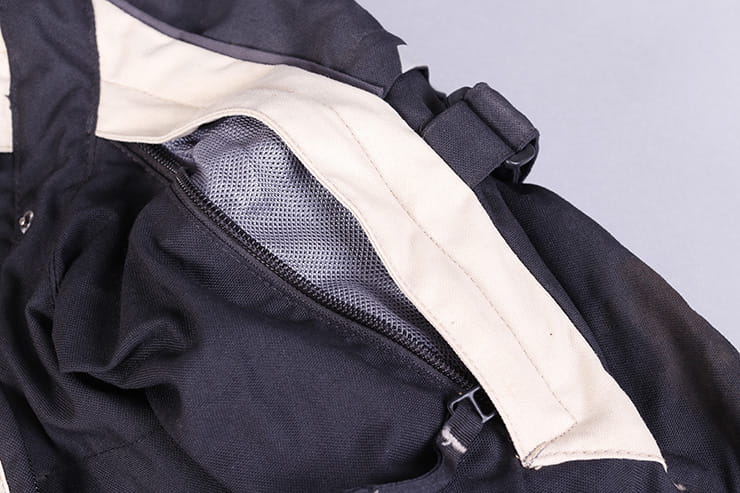 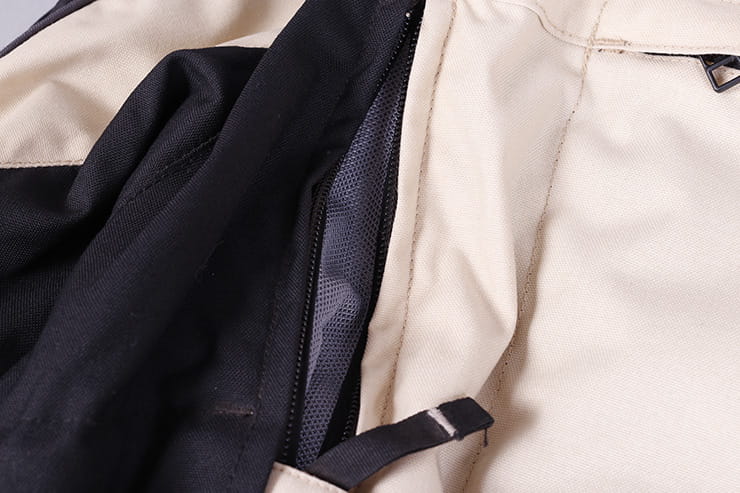 There are two smaller weather-sealed zipped pockets just above the lower large pockets. They are not that deep, so I found them useful for chewing-gum and ear plugs.

I found this jacket to be most versatile and comfortable. Having three layers allowed me to change the level of insulation warmth and ventilation on the move. This would be great for the British summer. Not being laminate must frustrate you being caught in winter rain as the jacket would remain wet on the outside.

This jacket is far more versatile and suited to warmer climates. If you are packing your bag for your ‘’Long Way Down’ or ‘Around’ then consider packing the Limfjord 2.