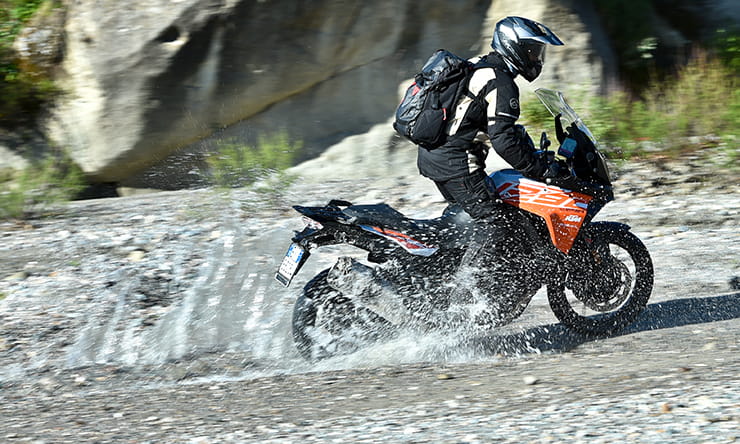 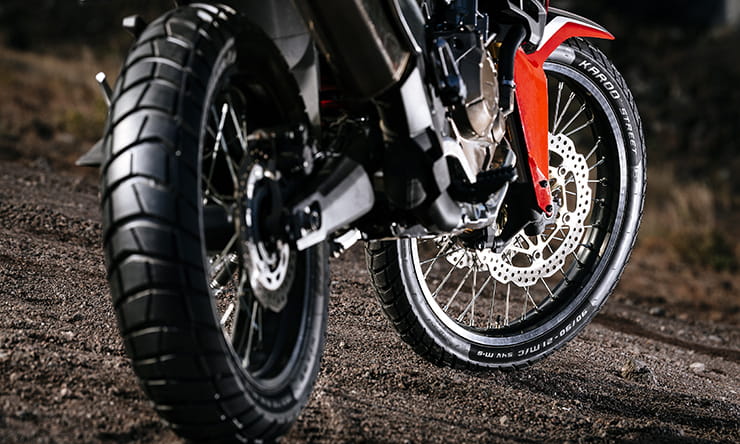 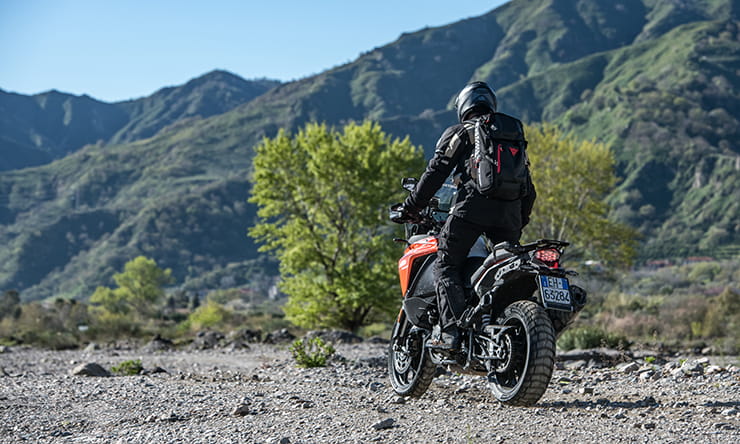 The new Metzeler Karoo Street tyre is part of the three-tyre Karoo range and is aimed at owners of adventure, ‘enduro street’ and dual purpose bikes looking for sport touring performance when riding on the road without sacrificing off-road capabilities. These are the type of riders who own high-spec machines and ride long-range tours including off–road.

The Karoo Street can also find a suitable home on retro custom and scrambler-style bikes for riders and builders that want the knobbly look and style look with road performance. After all, here is a knobbly tyre with significant on-road performance. A 70%-30% on-road to off-road split ratio say the manufacturer.

Metzeler have taken learnings from the track and their sports touring development to create the Karoo Street, dedicating plenty of know-how to wet-use development. The new silica and carbon black compounds give the Karoo versatility and great wet and dry grip.

The Karoo Street features under the heading of ‘expedition’ in the three-tyre range which Karoo 3 as the more tough off-road biased tyre and Karoo Extreme being the full competition off-road rally option.

Here’s a little taster of how we got on at the launch in Sicily:

Often when sports touring tyres are first launched we’re not able to test the tyre in all conditions. The best tyre tests are based on road and then at a test centre where you can test dry, wet grip and braking in a controlled environment. Some test tracks are even set up half dry/half wet.

So when we went to Sicily, home of Pirelli/Metzeler, we found a unique test environment that included the active Mount Etna volcano and surrounding roads, tracks and dry river beds that gave us the chance to test every condition and surface. 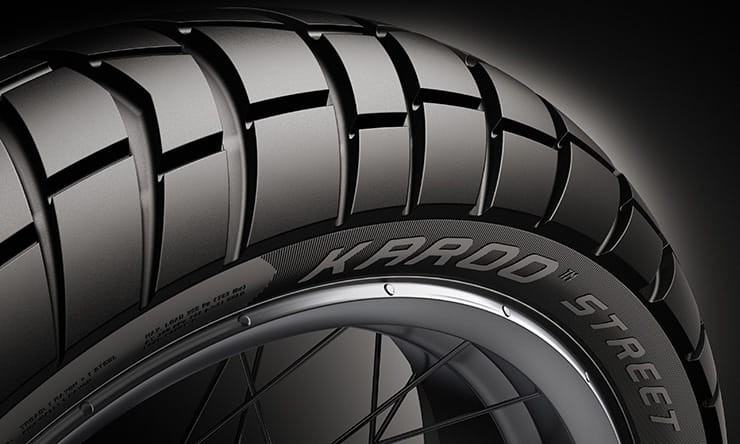 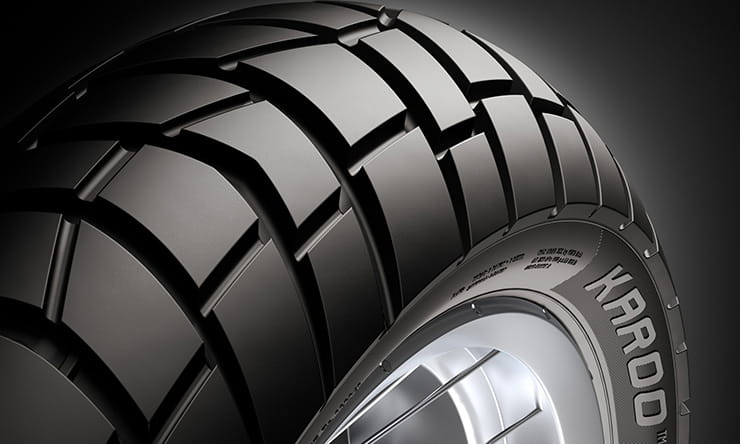 A quick Google search before we arrive and I’d learned that the volcano spits out volcanic ash which makes every surface slippery and when the ash cloud is more active bikes are banned as the ash builds up in the centre and on the side of the road.

Before the test I walked a few miles to scout the roads and checked the level of grip on the roads under foot. The tarmac had far less traction than typical UK roads and there was certainly a fine layer of volcanic dust that wasn’t that clear to see. Running my foot over the surface you could feel the gravel and it sounded like sand paper.

If the tarmac surface was not scary enough they have large metal grids and man-hole covers that run across the roads, often on corners and with the extra hazard of melted tar on the surface. I also found unpredictable broken surfaces in the tarmac, some with grass growing through and of course, cobbled stone roads in towns and on rural paths.

When you ride up Etna you find that there is snow melted into rivers by the higher volcanic surface temperature. The water that runs down over the roads has volcanic stones and ash.  There are steep slippery on and off camber incline and declines with tight bends. Along the test route trees leave debris and leafs on the roads. This was a natural slippery wet to dry and back again testing ground – ideal for such a tyre. 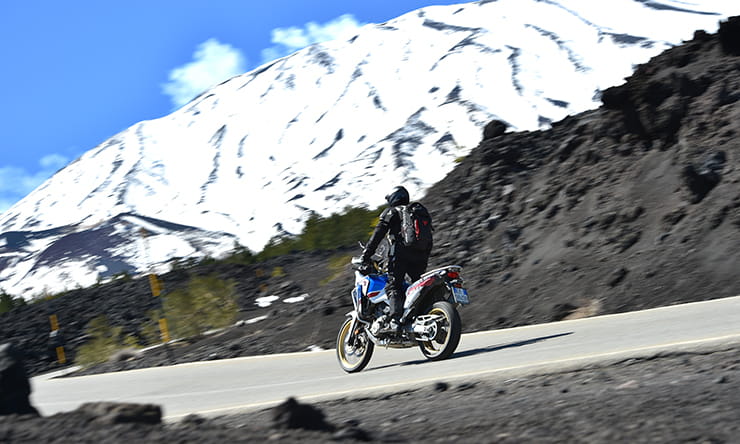 During the off-road section of the test route, dusty dry river beds contained lose gravel sand and rock which again was an ideal measure of testing extreme off-road wet grip riding over slippery river rocks in a rock and mud stream.

Grip is always a concern in these changeable and unpredictable conditions. 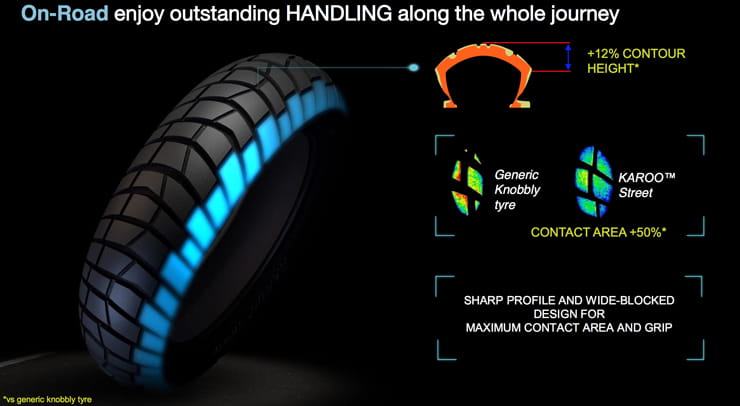 On the smoother roads and stability is created by having the large wide block multi–pitch layout. The large land-to-sea ratio and increase in contour height (by 12%) gives the tyre 50% more contact patch than a traditional knobbly. The narrow water dispersing grooves offer better rolling feel and comfort than a knobbly tyre too.

While off-road traction is generated by using transversal grooves instead of the typical knobbly horizontal line. The edges create the traction while self-cleaning stability groves running longitudinally - the direction the tyre runs which assist with support and grip. 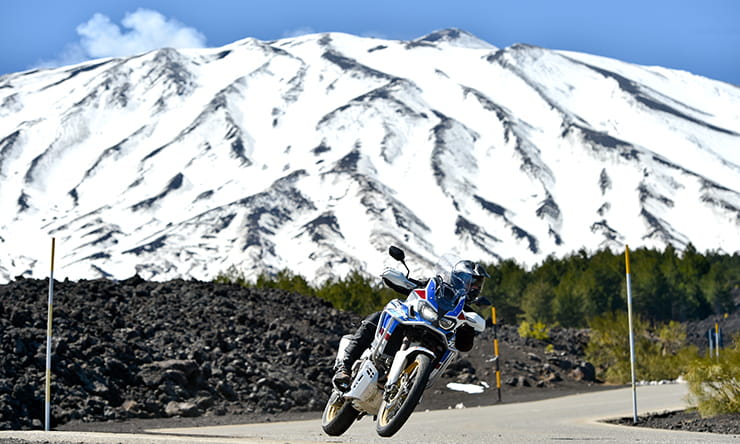 On road – the tyre felt like a road sports touring tyre. There was no vibration or indication that the tyre even resembled a knobbly. As soon as we set off we rode through deep muddy roads with large puddles.

With wet muddy tyres we then rode onto the tarmac and through the first villages with cobble stoned streets including those pesky metal grids yet the wet tyres stayed strong with no slips or skids.  The transition between the surfaces even with wet muddy tyres was seamless.

Nothing seemed to phase or upset the bikes, even when rolling over that near-invisible layer of ash, even at lean.

On the sweeping roads and the twistys through forest area where the corners were almost 360 degrees, the only thing I was sorry about was that I was wearing adventure gear. I had to keep reminding myself not to drag my knee on the ground. I flicked and rolled the bike from one tyre edge to the other with ease. 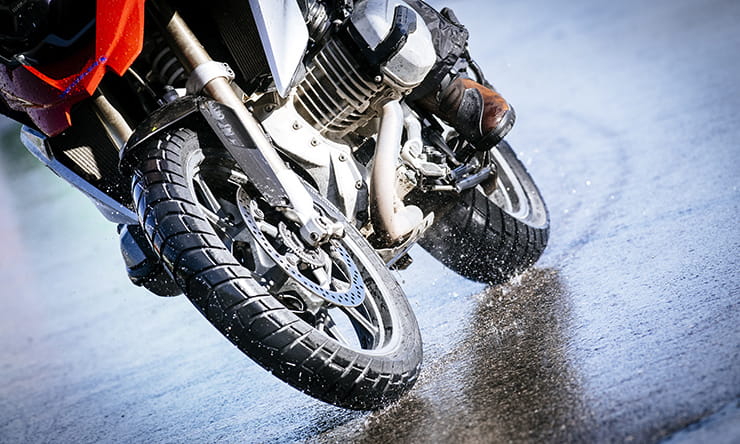 Off the beaten track there were cobbled roads that had horizontal groves but more worryingly vertical groves in the surfaces. My natural instinct was to be careful over this surface yet crossing these groves slow or at high speed in either direction was effortless.

We rode through dark unused service tunnels in the mountains full of sand and dust, again no problem, stability and grip was great. Along the mountain path we rode through deep puddles and mud leading back on to the cobbled surface and there was always enough grip. When I looked at my tyres and the self-cleaning groves they were clean and there was no mud between any of the gaps.

Braking in straight lines or carrying both front and back brake the bikes were stable. High speed stability on a section of motorway was un-eventful which is a good thing.

My heart always skips a beat when I see running water on the road and therefore try to always ride smoothly showing the relevant respect. The grip levels over the water, both up and downhill was good. The off camber wet sections were not a problem for the Karoo. The high silica compound gave me the same level of confidence that I have felt knee down on a sports touring tyre in the wet. 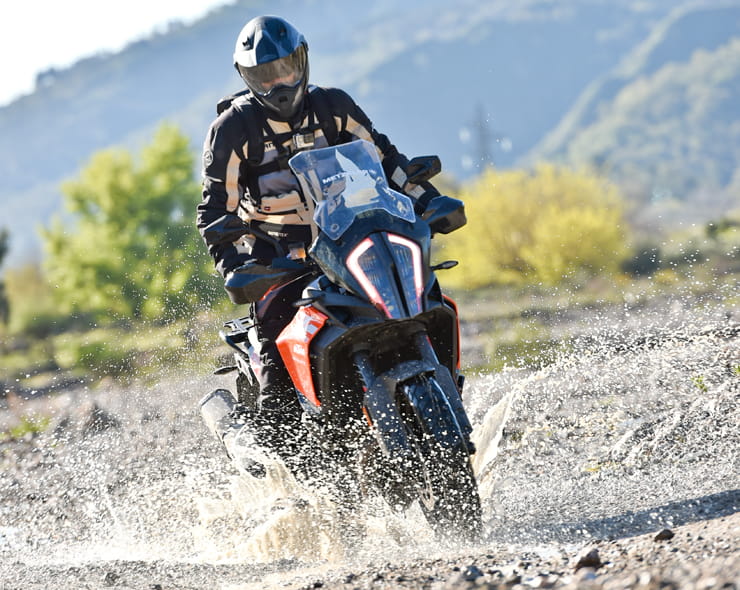 Recently I have spent more time riding lightweight MX bikes with competition level MX tyres fitted rather than large adventure bikes like those on this launch.

Riding a large adventure bike in a dry river bed with deep sand and lose rock should have raised some concern over grip but it was really easy to ride over and through the sand, gravel and the lose rocks. You want stable and easy if you are stuck out in a remote and potentially hazardous place. 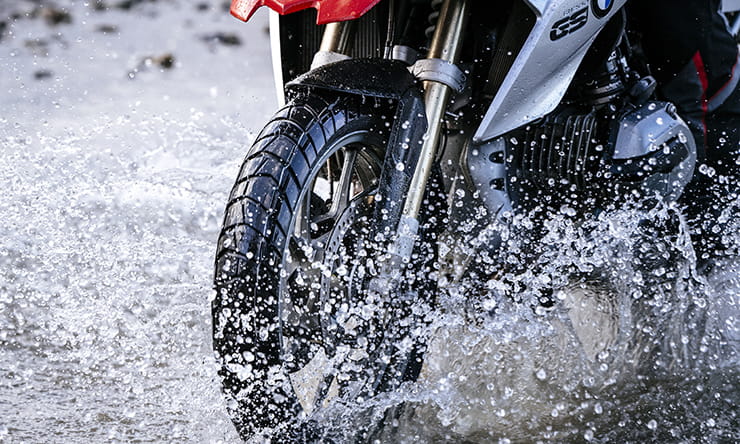 My relief was audible when I pulled the bike into the muddy stream to see well the tyres would do over the wet rock and mud. I expected the big bike to struggle. In one deeper tight section between some rocks I thought I may get stuck but there was more than enough traction. The silica compound found grip on the slippery wet rocks. The Karoo Street has a 70-30 rating. Riding the bike down a rocky stream the way I did made me really impressed by the 30% off road performance. 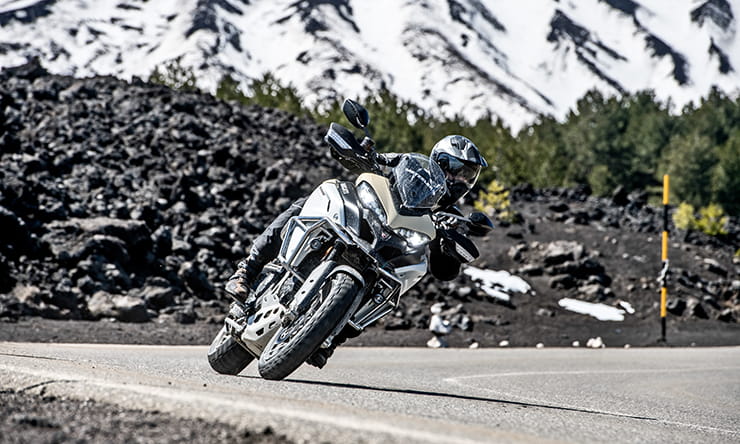 Last year I took a road trip to Austria to attend Euro Bike week. I found myself in torrential rain riding motorways, fast sweeping roads, tight twistys and mountain passes like the Stelvio Pass. I hadn’t predicted rain or that I would get stuck or fall off my bike in a freak summer snow storm in the Dolomites. Adventure touring you need a tyre that can cope with all that nature can throw at you. If you are like me you and find it fun challenging yourself then you need the equipment that is up to the challenge too.

The biggest compliment I can pay this tyre is that I stopped thinking about the level of grip as it was always there. I rode over all these surfaces, wet and dry and I never had a breakaway slip or skid. The Karoo Street is worthy of its claims; it is a great cross-over adventure tyre. The tyre has on road comfort and performance, with loads of off road and wet weather grip. 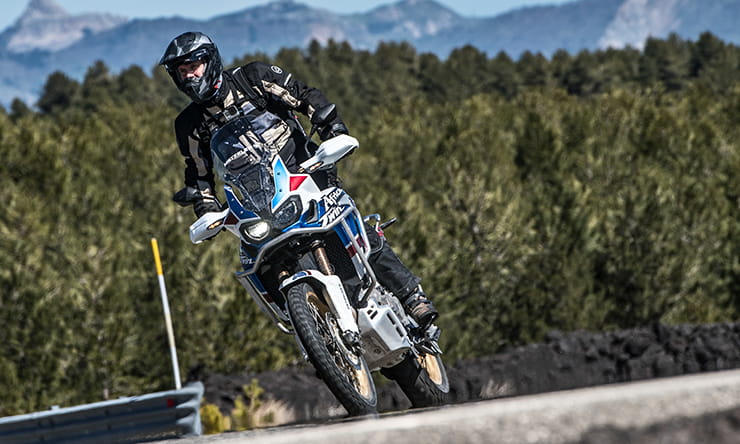