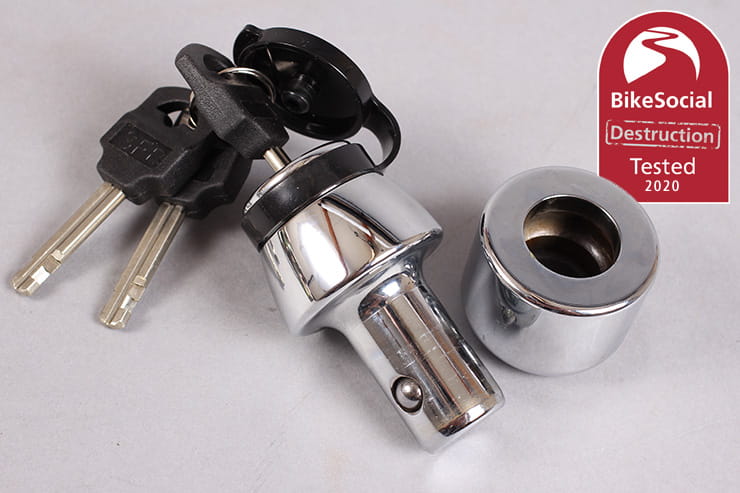 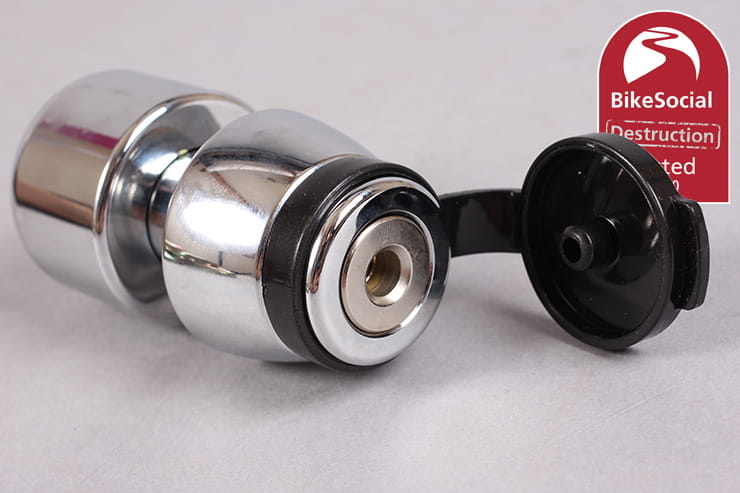 The Pragmasis RoundLock RL21 is an incredibly compact, lightweight disc lock that’s easy to carry and use, yet also doubles as a lock for securing a chain.

I’ve destruction tested it with a 16mm chain, 19mm chain and even a massive 22mm chain, and in every case the lock was tougher than the links. This thing is so hard to beat that its price seems incredible compared to some of the highest-security locks on the market.

The only way this could be defeated before a chain is by picking, and while this is of course possible, it requires specialist tools and a lot of skill; even the hosts of the biggest YouTube lock picking entertainment channels now end many of their videos pointing out that on the street, these attacks are very, very unlikely. 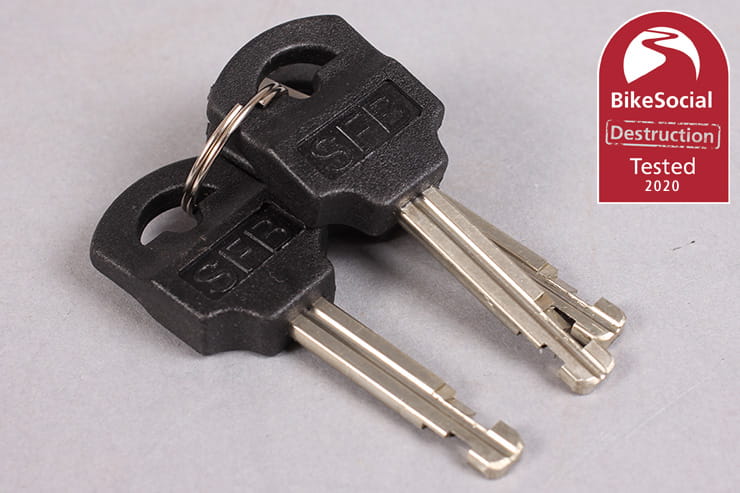 At just 0.53kg, this Sold Secure Motorcycle Gold lock is very light. It’s also really compact, slipping easily under most bikes’ seats, or in the smallest corner of hard or soft luggage. It’ll easily go in a rucksack, though I’d always recommend wearing a back-protector. It’d also fit in a pocket, but you should be very careful about doing this as it could cause injury if you had a fall. 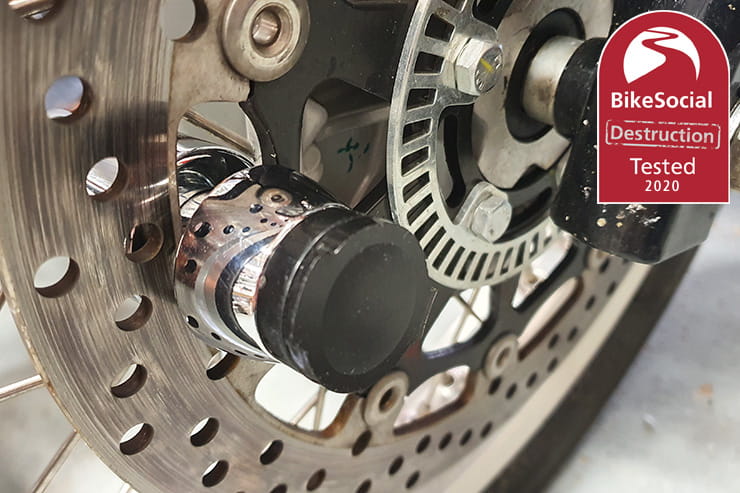 The keyway is covered by a plastic weather cap and, once opened, the body separates into two pieces. Pass the thick, 21mm shackle through your bike’s brake disc, pop the back on then turn the key to lock.

The Pragmasis RoundLock can also be used to secure a chain, as long as the links are able to pass through each-other. It’ll fit some 13mm chains (make sure there’s enough space inside the links), and those up to around 16mm. It also works with 19mm chains, but you’ll need to use the RL21A socket, which is a modified version of the back of the body. You can buy the lock with both sockets for an additional £12. 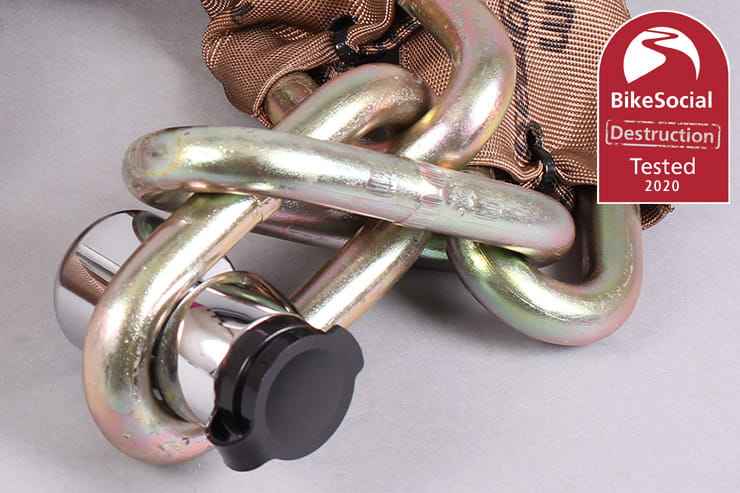 To work with a chain, the links should be able to pass through each-other, so the RoundLock can fasten around the end link

While I’ve tested it with a 22mm chain – and it was tougher even than that – it was Pragmasis’ own design, which has end-sections machined specifically to work with the RoundLock. At around £280 it’s a good price for a 22mm package, plus the fact that the lock also doubles as a disc-lock when you’re out and about makes it one of our most recommended high-security locks. Just note that the RoundLock won’t work with other brands of 22mm chain.

Extra keys can be cut using the blanks available from Pragmasis, and you can also buy the RoundLock keyed-alike to other RoundLocks or the company’s DIB D-locks (or U-Locks) for an extra £4, which is really handy if you have more than one bike to secure but don’t want a mass of keys. 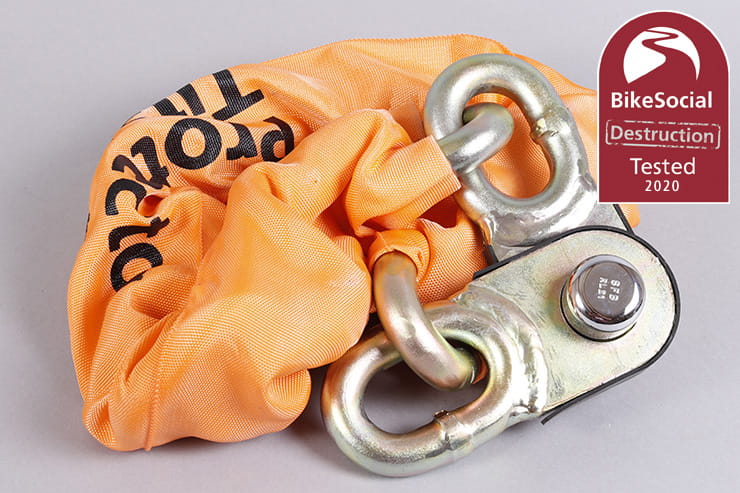 There are other locks available that could work with a wider variety of chains, though they don’t always come as cheap, and they’re rarely as undefeatable. Having said that, a lock only has to be as tough as the chain it’s securing, so don’t bother trying to put the king of locks – the Squire SS100CS – on a 9mm chain.

This worked great as a disc lock on both the Royal Enfield Interceptor 650 and my Kawasaki ZX-6R, but it wouldn’t fit my Honda MSX125, which has a small brake disc, much like a scooter.

It’s also worth noting that, while more traditional disc locks and mini U-locks fit on the BMW S1000XR, this one won’t as the openings in the disc are too large; the lock just drops through. 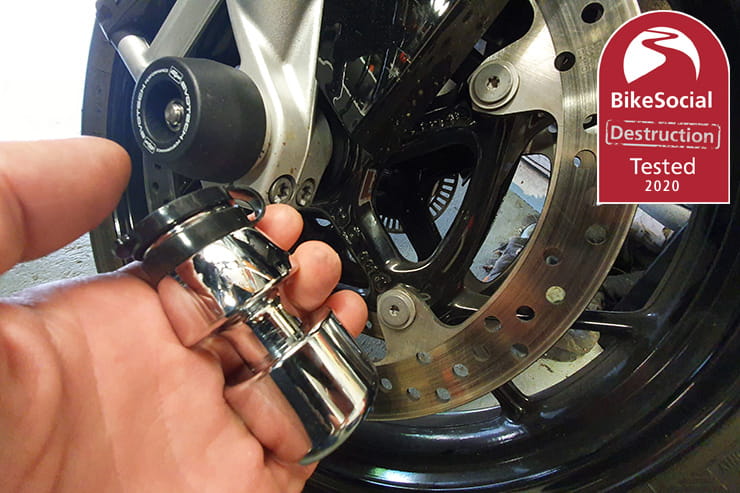 Not all brake discs are compatible; this BMW disc has openings that are too large

Forget it. I couldn’t beat the Pragmasis RoundLock with a sledge-hammer (including freeze spray), bolt croppers, pry bars, drill or even an angle grinder before the 1.2mm cutting disc on my mains grinder was completely worn out. This exceeds the performance of any chain I’ve tested.

The RoundLock is an incredible lock for securing chains and it makes a great disc lock, but it suffers from the same vulnerability as other disc-locks; thieves will consider cutting the disc itself to remove the lock before pushing the bike away.

Of course, a bike secured with a disc lock can be picked up and put in a van too, but a push-away using a scooter is a more common attack 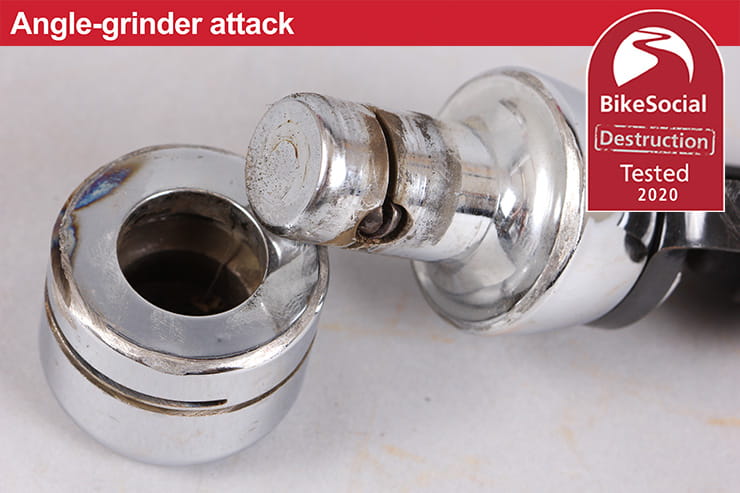 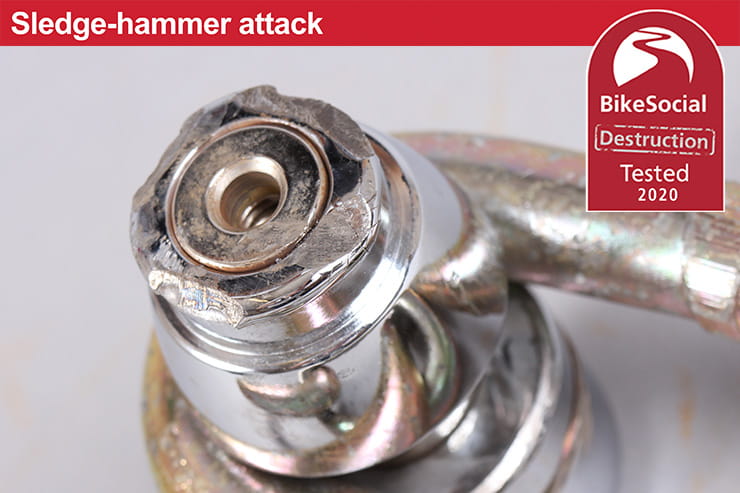 Even after all the attack tests, the Roundlock still worked!

This has to be one of the toughest locks I’ve ever tested, but it does have the same vulnerability in the cutting of the brake disc that others suffer. Only the £249.99 Squire Attila makes this attack harder for a thief.

Disc locks are of course also limited by the fact that the bike can be lifted into a van, so a quality chain and lock is the best security for your bike, though a disc lock with an integral alarm is also worth considering. Still, the fact that this small, affordable RoundLock disc lock can also secure many chains from 13mm and even up to 22mm certainly makes it hugely versatile. This is the one that beat me; thoroughly recommended.