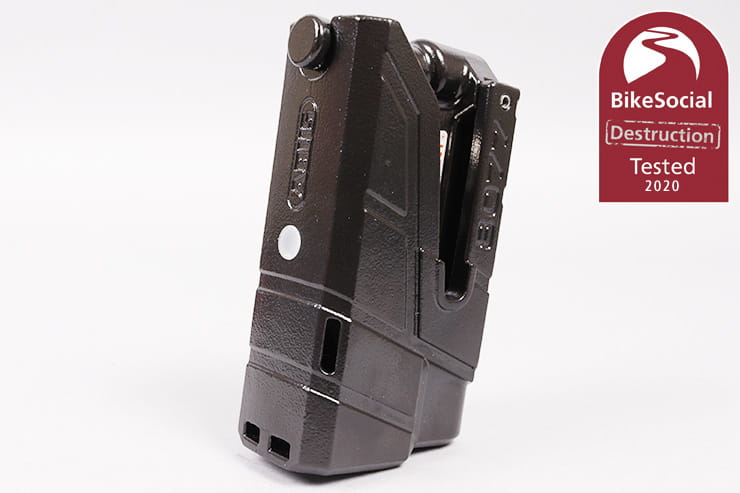 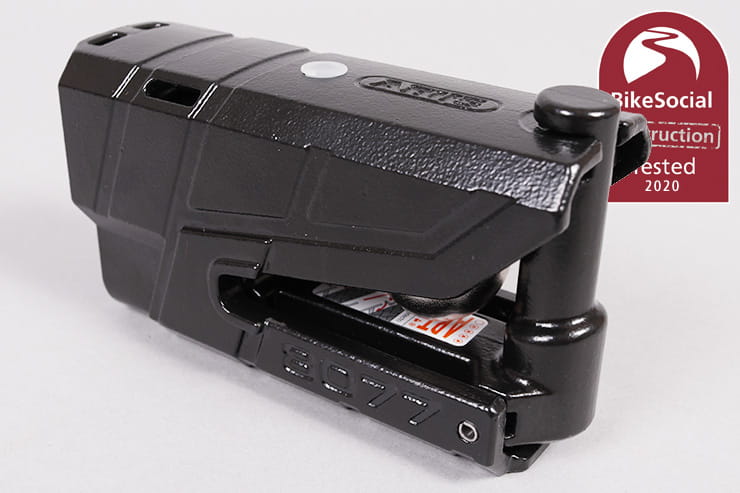 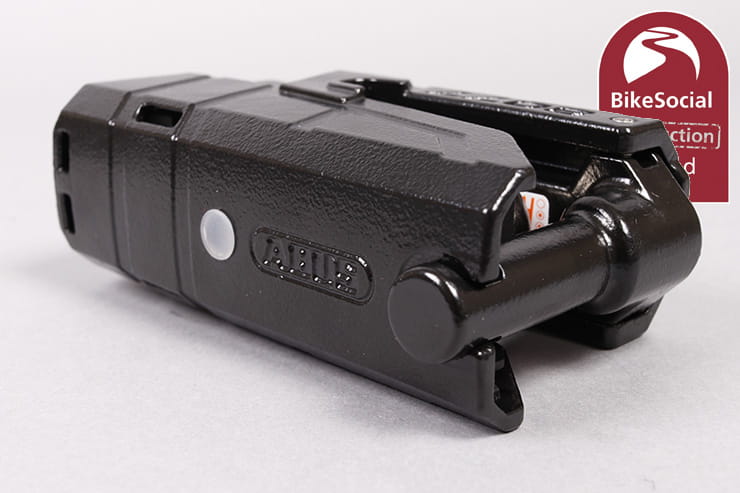 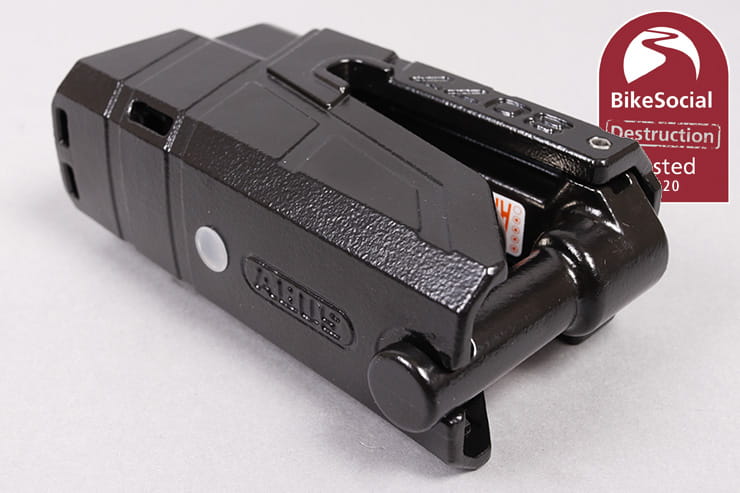 The Abus Granit Detecto 8077 is an alarmed disc lock with a hardened steel body and 13mm locking bolt, as well as a pick-resistant barrel.

The 100dB alarm is powered by two standard AAA batteries (a pair of branded Vartas are supplied), and it comes with two keys – one of which has a little LED built in – and a key code card for getting duplicates made. 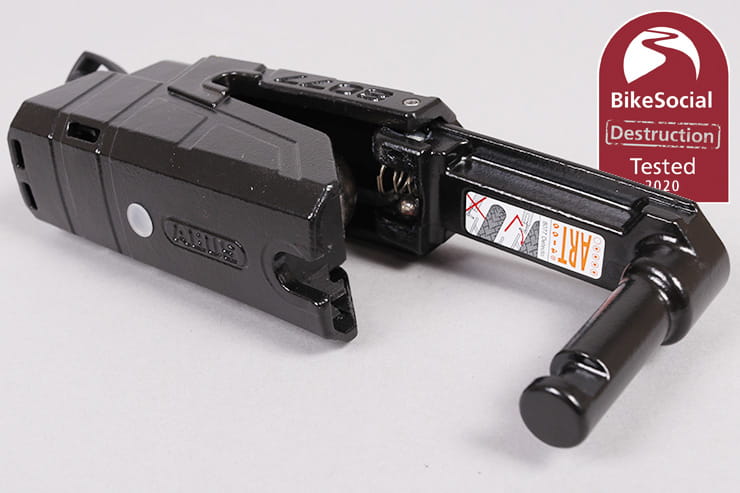 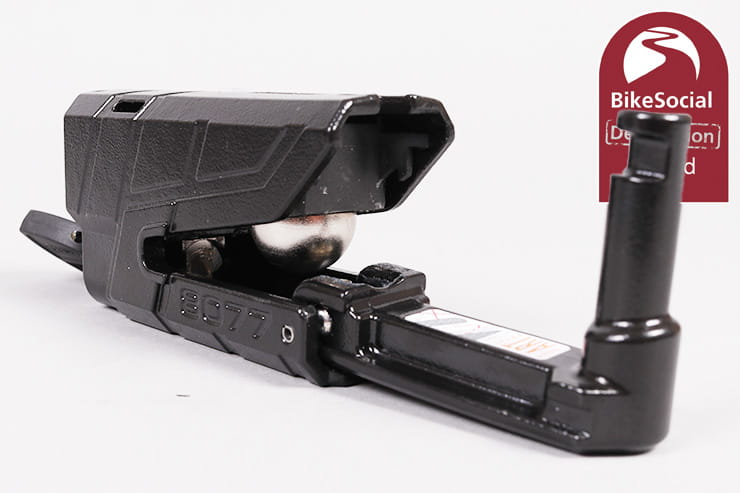 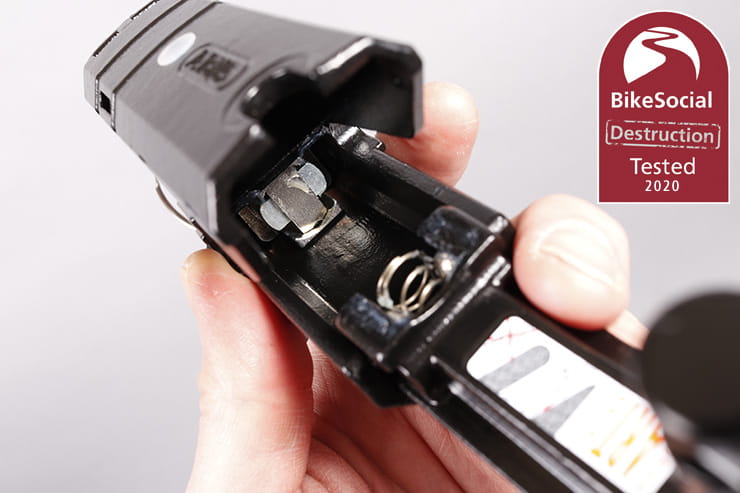 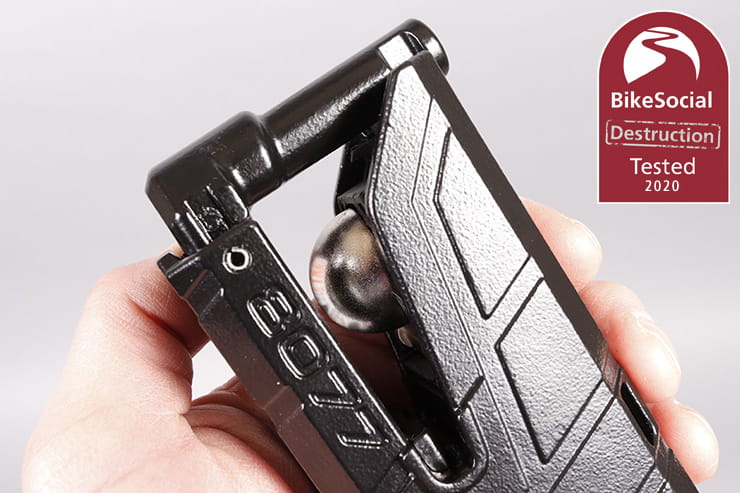 Weighing 838g, this is a chunky, solid piece of kit; it’s certainly an imposing-looking device. Like any lock, you shouldn’t carry it in your pocket for risk of injury if you fell off, so you’ll need to find some space under the seat of your bike for it, or in some luggage.

A pouch is supplied with the lock, but it’s not designed for carrying it on your body or for strapping to the bike, so at most it’s to protect other items that it might rattle against in a top-box or under your seat; it’s unlikely most will use it. 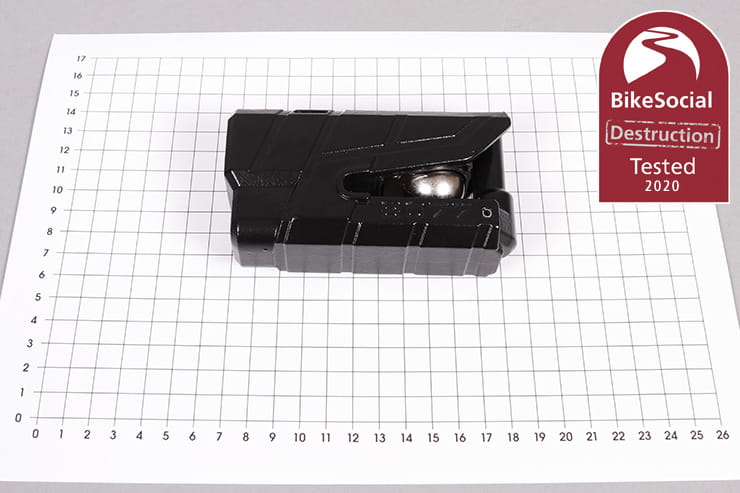 Fitting and arming the Abus 8077 couldn’t be easier – just slide it onto the brake disc and the large half-round actuator is pushed down, which turns the alarm on. It will beep, so be aware of that if you live in a quiet neighbourhood and use your bike late at night – it also usually starts beeping before you get it off, thanks to the large L-shaped locking bolt that needs to be passed behind the disc and through, so if you leave for work at the sparrow’s fart, don’t park under your neighbour’s window.

The key has to be in the lock, and you need to turn it to secure the 8077 once it’s fitted – that makes it a little more awkward to put on, but it’s a knack you’ll soon have. Equally, getting it on can be slightly more difficult on sportsbikes with large discs and small wheels, but again, you’ll soon be doing it in one smooth motion.

It’s unlikely that this lock will work with many scooters due to the small holes in the discs fitted to these machines. 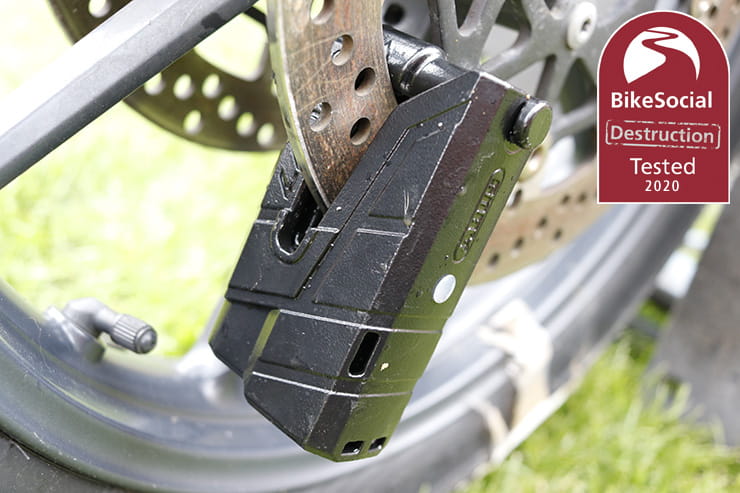 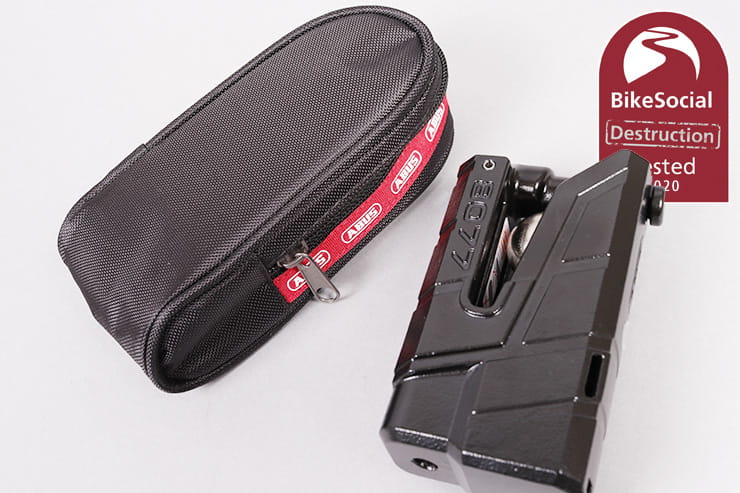 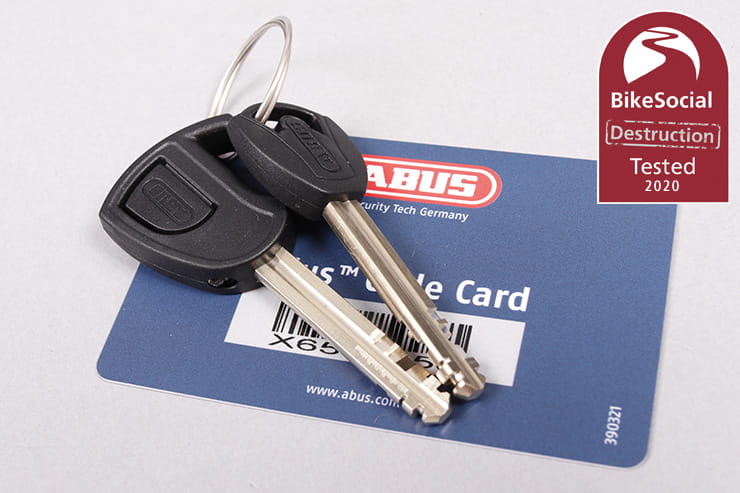 Once fitted, a red LED flashes as a warning to potential thieves, then when touched it starts beeping a warning before going into full siren mode. The siren is very loud, and will certainly attract attention but it’s not painful to be next to in an enclosed space like the Xena XX14 disc lock; it is going to wake you up though, and it’ll have others looking at what’s happening.

If the batteries are starting to get low, the LED will flash orange for four seconds before the siren beeps once to tell you it’s armed. If they’re getting close to exhaustion, the siren will beep three times when you put the lock on the disc, the LED will then flash red for six seconds, then there’ll be the usual arming beep.

Water ingress doesn’t appear to be an issue – even when hosing the lock down to soak it from every angle, only a little moisture found its way into the battery box, and operation wasn’t affected.

The only really fiddly bit of this lock’s design is the alarm unit retention – you have to use two flat-bladed screwdrivers to prize it out of the lock body. This does feel like an area that could have been a bit better thought out, but it’s not something that should stop you buying the 8077. 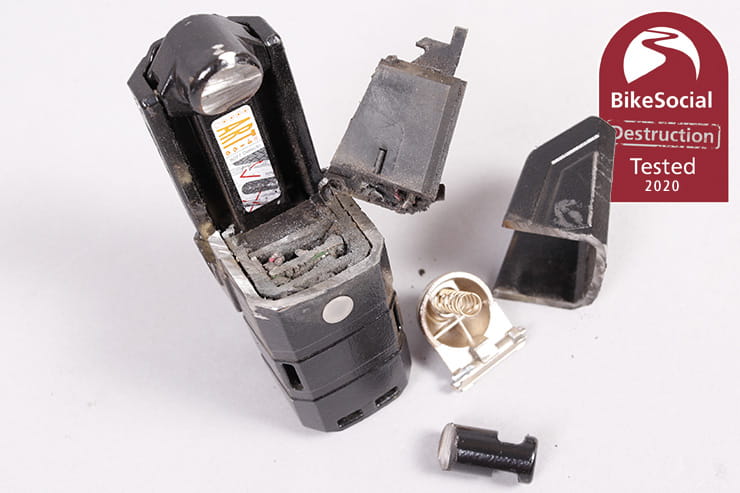 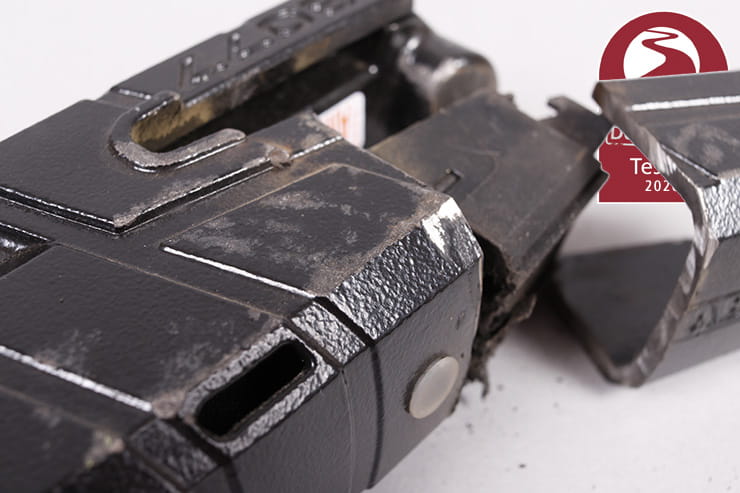 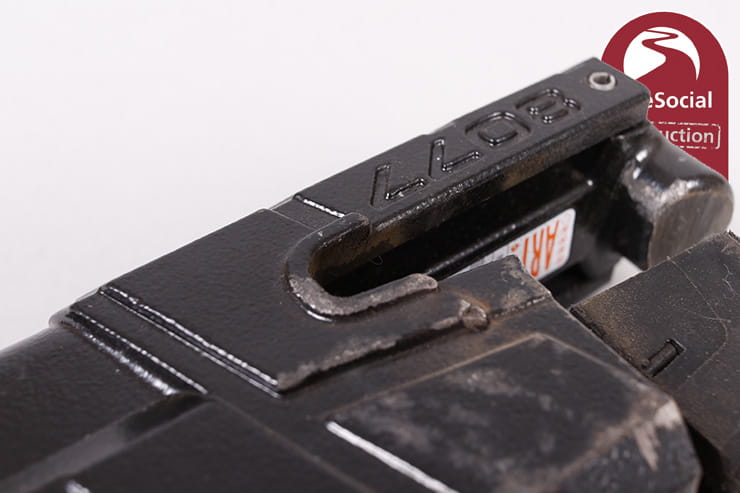 Beneath the half-ball actuator is a sealed switch

This thing is tough. No amount of prying or hammering would free this lock thanks to the very secure pin design. And all the time I was smacking it with a lump hammer, it continued to scream out – some alarmed disc locks tend to reset as the battery bounces around it its holder.

The only viable attack will be using an angle-grinder, the weakest point of the 8077 being the large locking pin. This can be reached with a cutting disc, which makes it slightly more vulnerable to attack than some other designs, but like all disc locks, the major vulnerability is from a thief cutting the brake disc itself before pushing the bike away. However, as our data shows, a decent disc lock like this – especially an alarmed one – still makes a motorcycle much less likely to be stolen.

The Abus Granit Detecto XPlus 8077 can be used with a chain, but you’ll have to make sure it’s a compatible one. There is a specific adaptor chain available, but this is designed to be used with the lock body on the disc to arm it, so cutting the disc is still an issue. Many chains under about 14mm thick will work with this lock though, as long as they have a noose end (a large loop on the final link that allows the chain to pass through itself) or links that can pass through themselves; if so, you can use this as a more traditional lock with the chain passed through the rear wheel, while maintaining the alarm function. Long link chains with a noose might work, but I tried an 11mm one and the chain could be pushed to the back of the lock – it was still secure, but the alarm could be turned off. The best bet is to take your lock with you to try it with a chain in store. 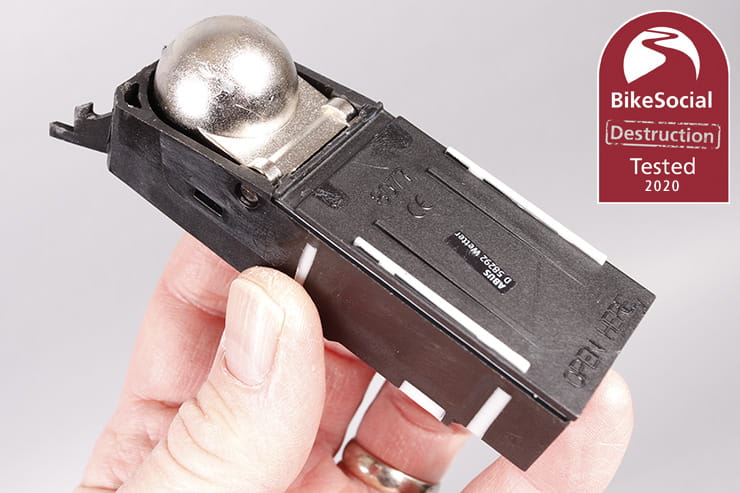 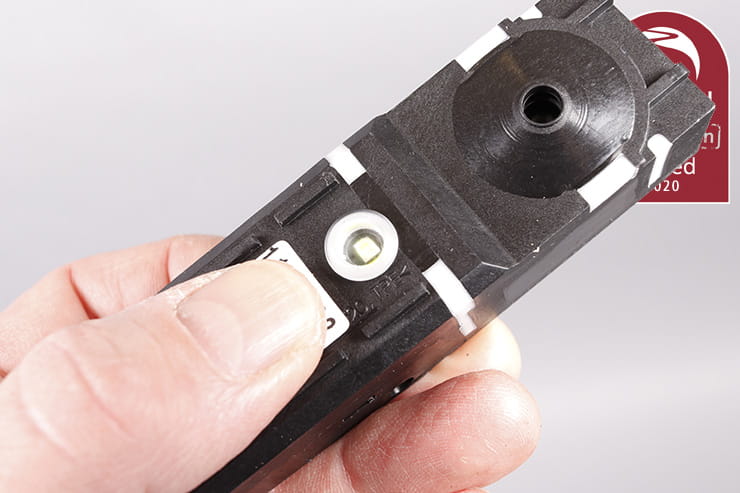 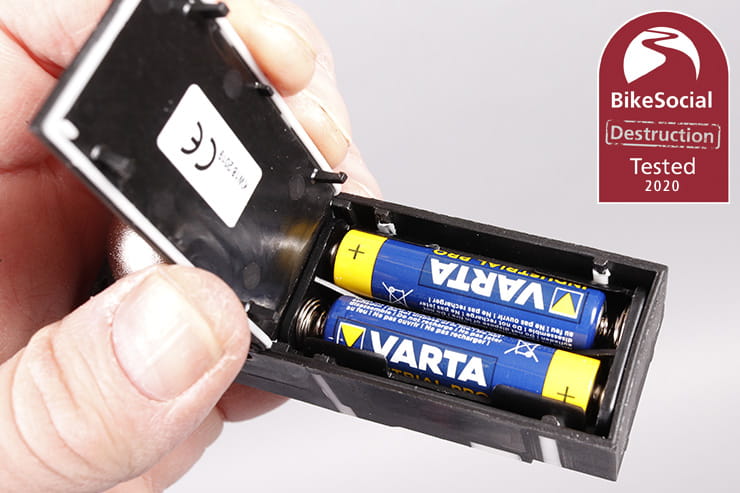 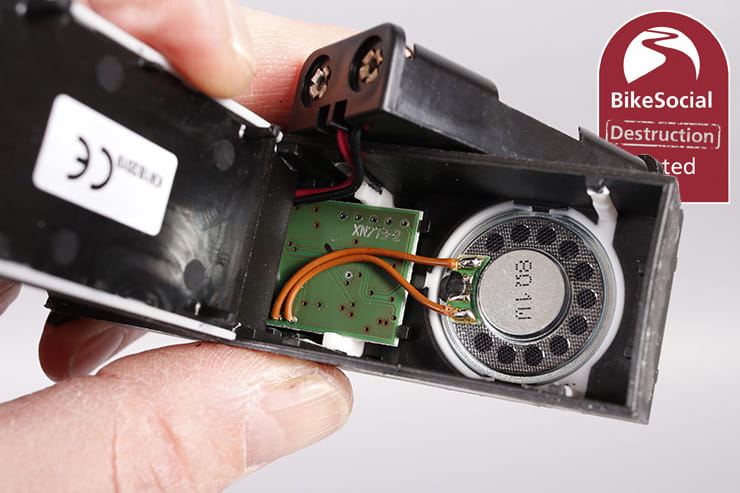 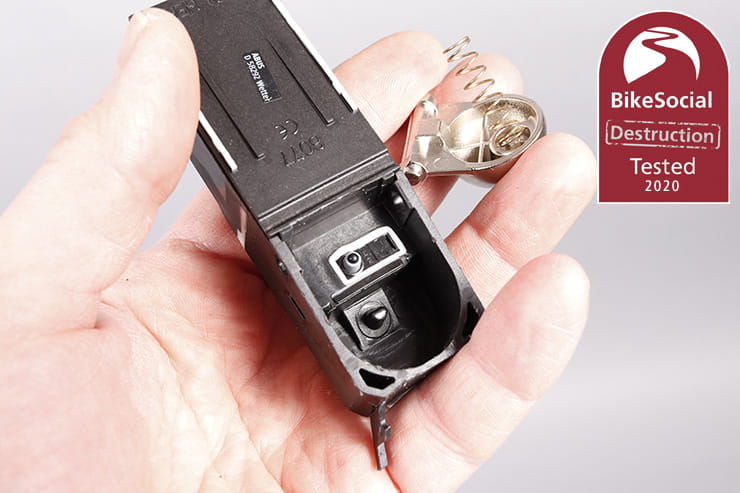 The fact that this lock can be used with a chain makes it pretty versatile – it’s more expensive than the likes of the Pragmasis Round Lock or a mini-D lock type disc lock, though you can find the 8077 cheaper than the RRP shown here. Of course, this Abus does has the advantage of a good-quality alarm built in.

There are more compact devices available without an alarm, but the combination of noise, strength and versatility make the Abus Granit Detecto XPlus 8077 a great option. 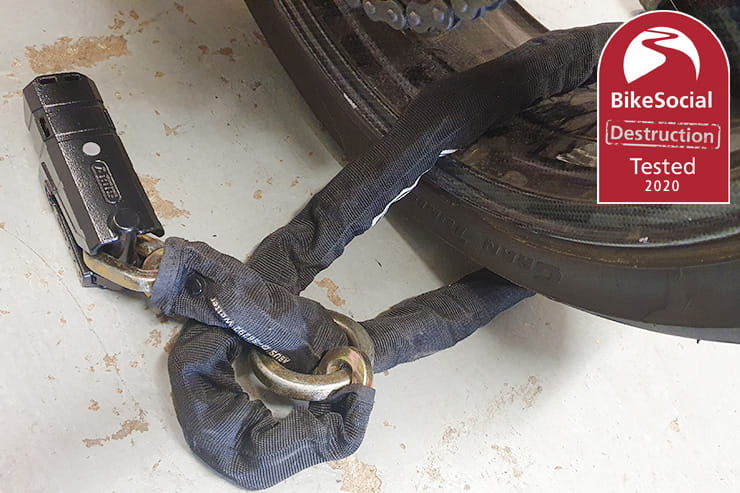 To see our reviews of the best motorcycle security, click here