How to use your motorcycle chain and lock 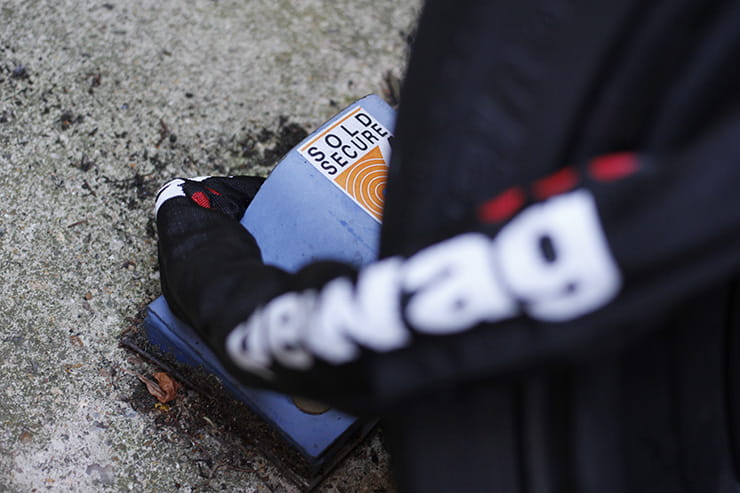 Whichever chain and lock you choose, it’ll be a compromise. You might want the greatest resistance to any attack, but that will be extremely heavy. Angle grinder attacks might be your biggest worry, but the most resistant chain we’ve tested at the time of writing was also one of the worst when it came to a sledge hammer attack. Maybe you live in a very quiet area, so a crook’s most likely to use bolt croppers; by knowing how to use your chain and lock, you can best protect yourself from crime…

Where to lock your bike

Ideally, keep your bike in a brick-built, locked and alarmed garage. Of course, if you do this, make sure it’s well secured itself – if the crooks can prize up a corner of the garage door and slide in, they can work inside unseen, undisturbed, and with your own tools. An alarm and something like the Blink camera system, could be worth considering.

If it’s in your garage, you should still use a solid chain and a ground anchor, positioned as described below

If you don’t have access to a garage, try to keep your bike as out of sight as possible – behind a gate or fence, or simply under a cover will help. 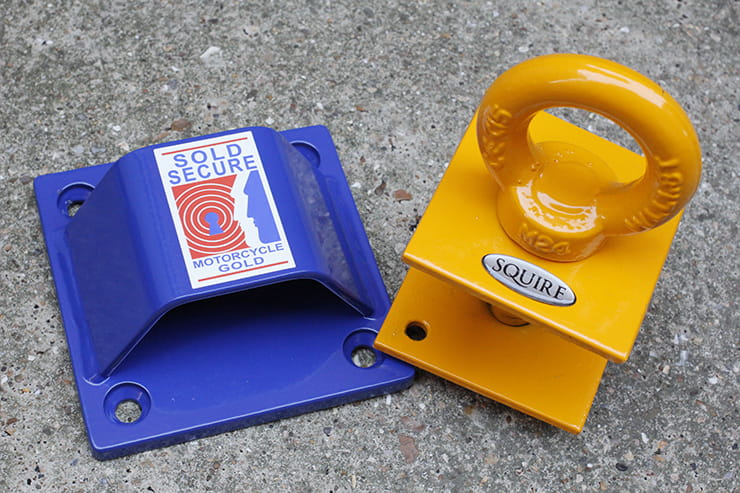 What to lock it to

It’s important that your bike is secured to something very solid. It’s too easy for a couple of people to pick a bike up and throw it in a van, regardless of whether it has a chain around the wheel or a disc lock. If you really can’t lock it to anything, get the chain as tight as possible around the rear wheel – some chains allow you to pass a link through any others, so you can get it tighter. This will help prevent a hammer attack, and could result in the tyre being damaged in an angle grinder theft, making it more difficult to take the bike away, especially if the thieves are hoping to push it with a scooter.

Of course, ensure that what you’re locking to is at least as strong as your chain – it’s no good relying on a wooden post or a thin piece of railing. If you have to use a metal fence, wrap the chain around the thickest point, or pick up several of the rails.

When fitting a ground anchor at home, position it close to a wall, and put your bike in front of it, to help prevent the thieves from getting access to pry it up out of the ground.

Secure the rear wheel of the bike, taking in the swingarm if you can, or part of the frame. Don’t use the front wheel – it’s too easy to remove, and crooks will even sometimes carry a spare; it doesn’t matter if it’s one for your bike, as long as it fits between the forks and the axle can pass through, they can have a mate push them from a scooter.

This advice applies to disk locks too – always try to fit it to the rear wheel if you can, not the front.

If you can, don’t park in the same spot every day – changing your route will make you less of a target. And don’t leave your lock attached to railings at work – it could be removed overnight, or even simply have the barrel filled with glue. If this happens to you, do not leave your bike, as the chances are the crooks are waiting, knowing you won’t be able to lock it up. 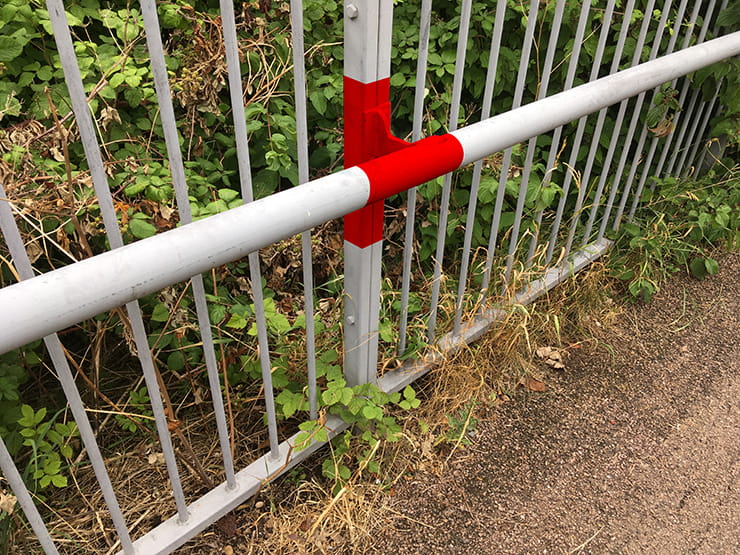 If chaining to a fence, the ideal point here would be up high, as highlighted in red, to keep the chain off the ground. Otherwise, use as many of the uprights as your chain will reach around

How to use the lock

It’s vital that your chain and padlock are kept off the ground. A sledge hammer attack is extremely noisy, but some chains can be broken in just one strike, while even some of the best can be seriously compromised by using freeze spray. Position the lock in such a way that a sledge hammer can’t be swung onto it, and keep it away from the ground, so this form of attack becomes pretty much irrelevant.

Careful positioning can also make it very difficult for a crook to get a large set of bolt croppers in place, though generally, if you can get in there to attach it, they can get in there to cut it. Make it as awkward as possible, and unless they specifically want your bike, they may well move on.

If you use a ground-anchor in an open space, like a work car park for instance, try to position your bike so the anchor is under the left, so the motorcycle is leaning over it. This will at least make a sledge hammer attack harder.

Angle grinder attacks can’t be beaten, but again, keeping the lock as inaccessible as possible will help. However, considering the speed with which a crook can get through any chain with an angle grinder, all you can do is park in as public place as possible, and hope they’re not after your specific machine.

It might be worth considering removing the sleeve and any other branding from your chain,  or simply turning the sleeve inside out. It’s unlikely, but a crook that knows the weakness of specific locks might be put off, at least for a while, if they don’t know which one it is.

Some chains come with a padlock that doubles as a disc lock – if you can hook this through your rear brake (or front if you have to), while also using it to join the chain, the crook will be forced to cut the lock if they intend to wheel the bike away, for instance when pushing it with a scooter.

The lock is usually harder to attack than the chain, and if access is difficult, this could very significantly slow them down. 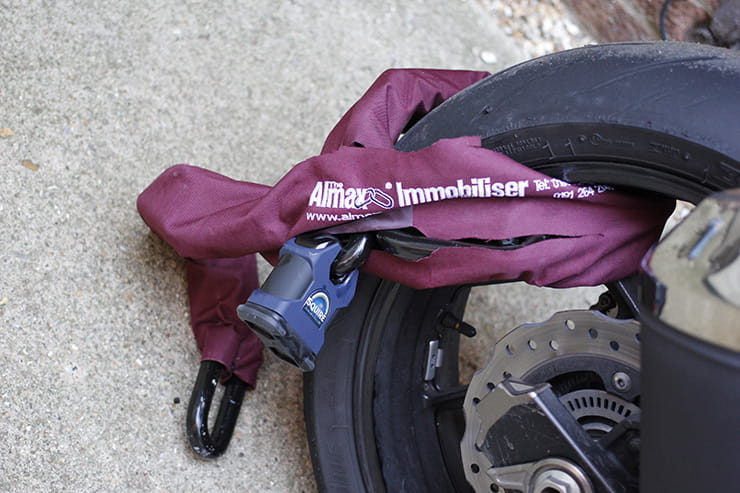 If you really can’t lock the bike to anything, try to get the chain as tight as possible around the rear wheel – this chain allows you to pass an end link through any of the others

According to Hal Rose of Cathedral Lock & Safe Services, a member of the Master Locksmiths Association, the best way to keep your padlock free is to use it regularly, and put a small amount of graphite powder in the keyway every three months or so.

If a lock has started to bind, consider using a graphited penetrating spray, like Silkolene’s Silkopen.

Sold Secure and Thatcham approval ratings can be a useful guide, but not all manufacturers use them – particularly the smaller, independent brands – as the initial and yearly costs can be high. We’ve had mixed results through our testing of approved and unapproved products.

It’s no good buying the biggest, heaviest lock, then not bothering to carry it. If you’re parked in an extremely busy area, and the thieves are willing to threaten bystanders while using an angle grinder, they’re clearly very determined. The most important thing is to use a lock, as seven out of ten bikes are not secured – if your compromise is that you have a lighter lock that you can carry with you at all times, you’re still presenting a far less attractive proposition to a thief.

To find your ideal chain and lock, click here

How we tested chains and locks