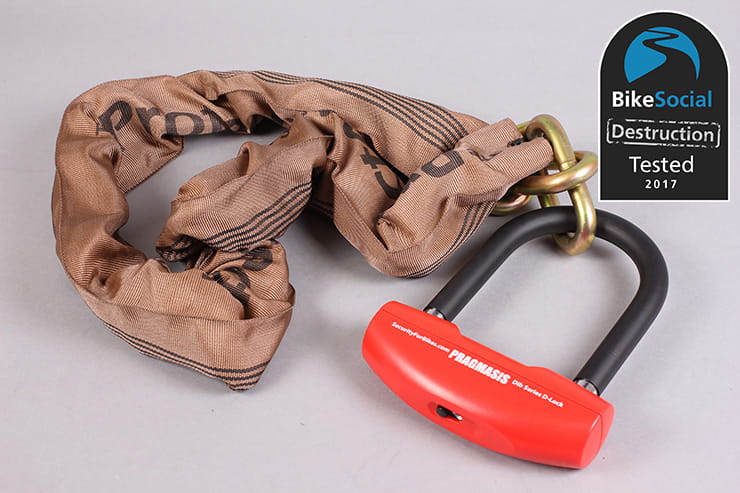 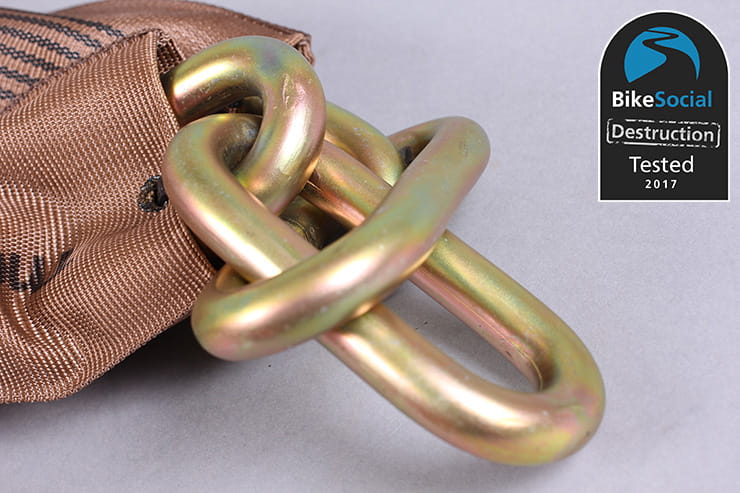 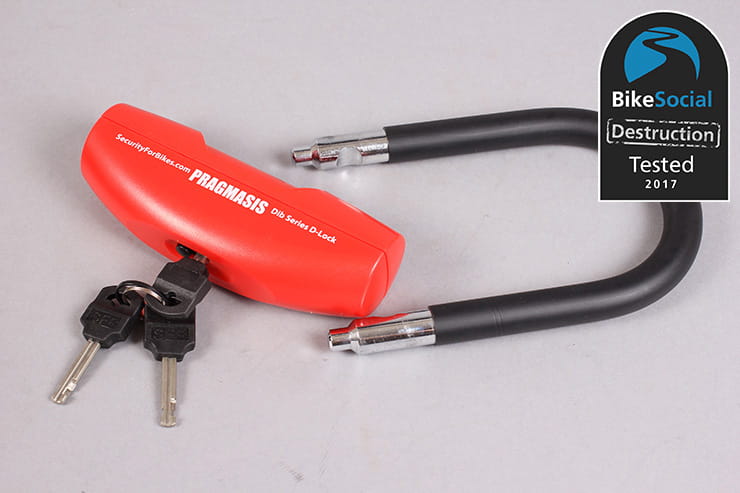 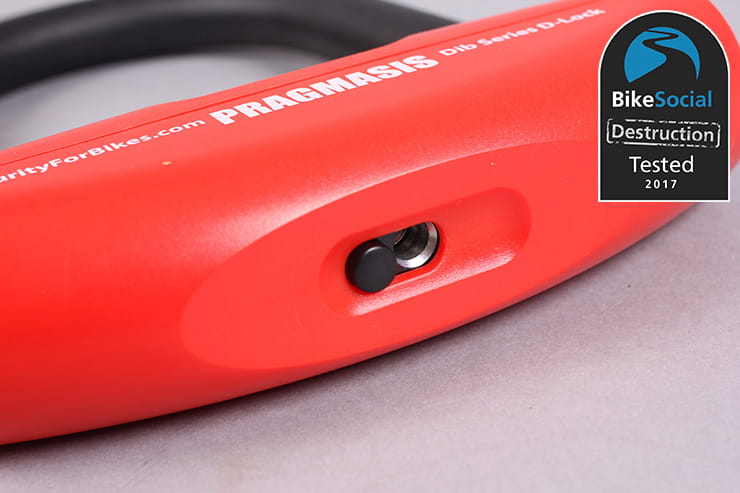 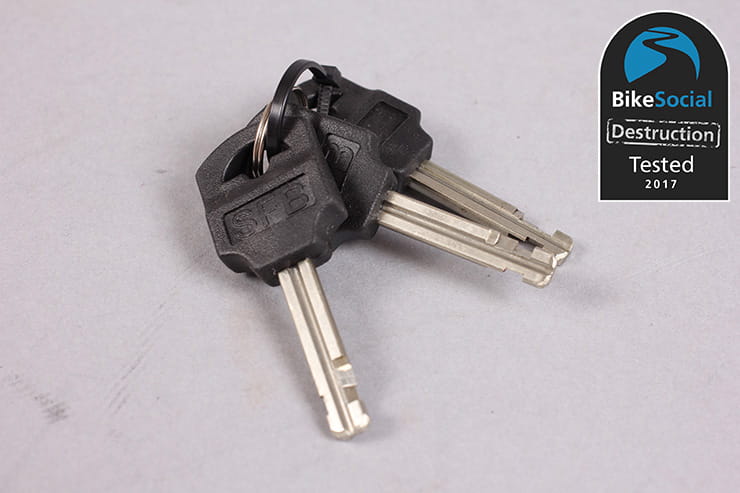 The 13mm Pragmasis Protector chain is available in lengths of 0.8-6.0 metres – we’ve tested the 1.5m version, which comes with a tough fabric sleeve, zip-tied at both ends, to protect your paintwork. This type of sleeve – as with other brands – can absorb water, so it’s worth popping it in a carrier bag if you need to transport it after using in the rain.

This is a chain designed to be used on the move – Pragmasis rightly points out that it’s not recommended for home use, as something of this size can, predictably, be defeated more quickly than a larger and heavier chain. It’s certified to Sold Secure’s Bicycle Gold standard.

Thanks to the long links, the supplied lock could be used at any position to tether the chain to the bike, while keeping the kit clear of the ground.

The chain is also available with a noose on one end for £20 more, making it easy to pass through itself and greatly extend the reach, while still using the long links to get the perfect length.

While a number of locks can be used with this chain, including Pragmasis’ excellent RoundLock (tested with the 16mm chain), we have the 130mm DIB D-Lock on test. There’s also a longer 190mm version available, but always choose the smallest you can, and ensure you fill the gap inside the shackle with as much of your bike or wheel as possible, to prevent a thief being able to prize it open with small, specialist tools.

The lock can be used on its own through the wheel or the disc, adding value to the package, and for £4 more can can be keyed-alike to Pragmasis’ other DIB U-locks or RoundLock.

The U-lock has a plastic-covered body with a rubbery sleeve over the shackle and a sliding keyway cover. Three keys are supplied, and the lock is approved to Sold Secure Motorcycle Gold standard. 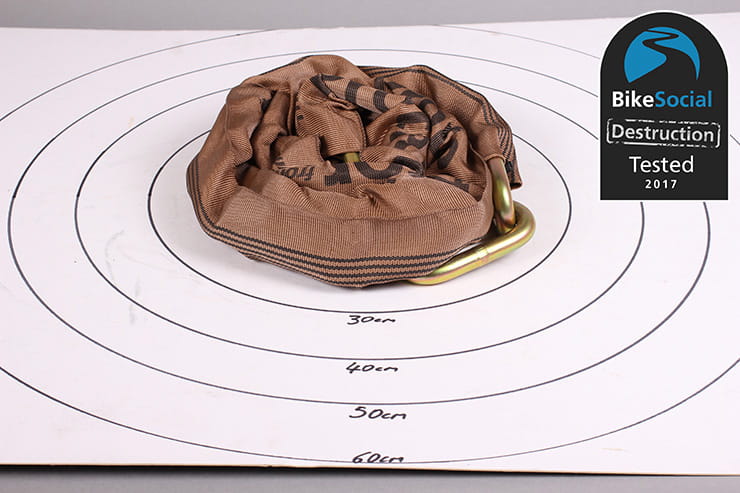 The links have a typical thickness of 12.8-13.7mm, and the chain covers a diameter of approximately 28cm when rolled up.

Using 42” bolt croppers, we could only put light surface damage on the chain, making it highly resistant to this virtually silent form of attack.

With a very noisy sledge hammer attack, using an improvised anvil and giving ourselves plenty of space, we were able to break it in 3 minutes, the link’s weld cracking after 2 minutes 5 seconds. Keep in mind that if used correctly, freeze spray will substantially reduce the attack time of most chains, so it’s always important to keep it clear of the ground.

In our perfect theft conditions, with plenty of space using our main-powered angle-grinder and 1.2mm disc, we cut through the chain in a relatively short space of time.

We were unable to defeat the U-Lock with a sledge-hammer attack, leaving only surface damage. This kind of device is typically attached to the bike, so it’s an unlikely route for a thief to take. Remember to always ensure that any U-Lock has as much of the void inside the shackle filled as possible to prevent a thief using powerful prying equipment to pop it open.

Using an angle grinder, we cut through the U-lock more slowly than the chain, though only one cut was required as the shackle has enough free play when separated to create a gap large enough to remove the chain. 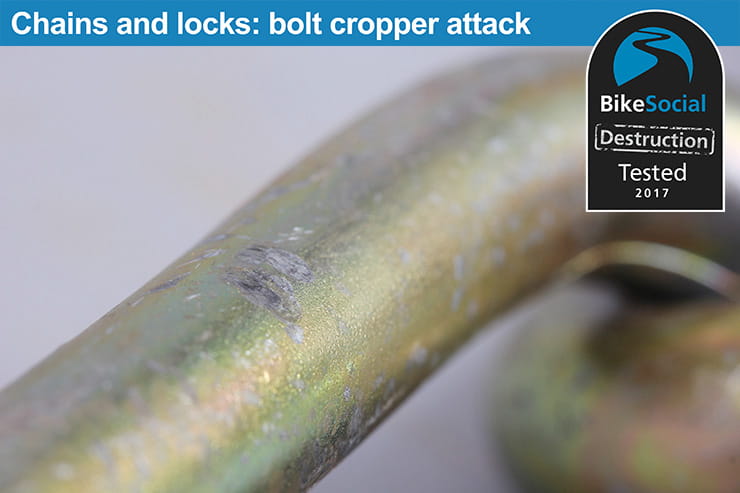 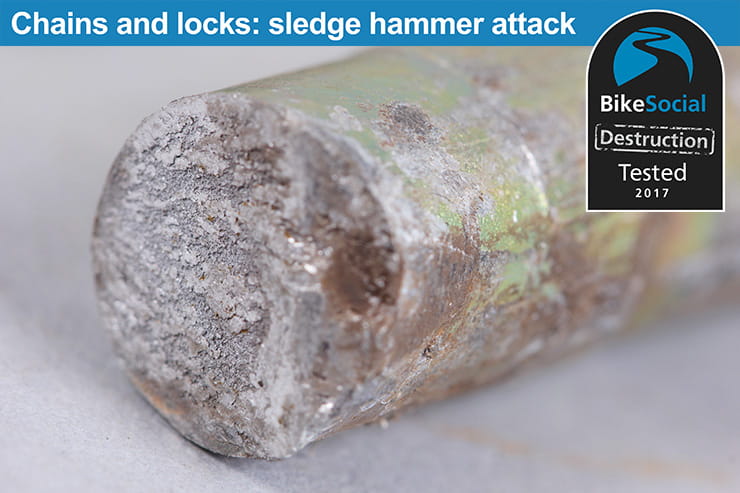 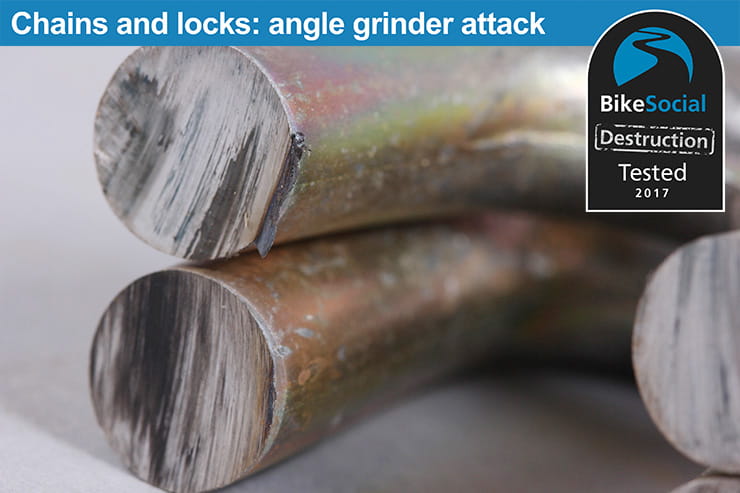 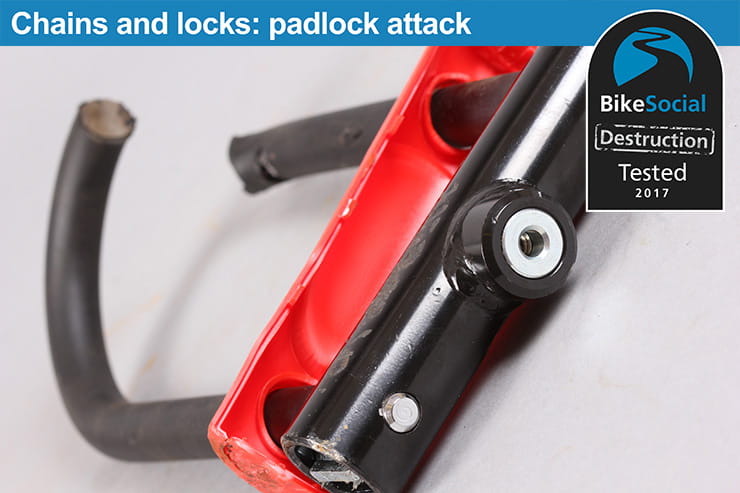 Despite the angle grinder attack speed, this is an effective deterrent for all but the most committed thief. As a chain and lock that you can fairly easily carry with you on the bike, it’s far better to have something that you can use than something so heavy you leave it at home.

If locking up at home, we’d always recommend something heavier, but for general use out and about, smaller, lighter kit like this is ideal. If a thief is willing to use an angle-grinder in broad-daylight (it really isn’t a common attack – the majority of stolen bikes are left unlocked), then there’s little that would stop them. Combined with the versatility of the long links that ensure you can keep the chain off the ground, so far less susceptible to attack than our criminal’s ideal test conditions, this is a very good value package.

Note: While we haven't featured the bundle, a great alternative would also be the Pragmasis 13mm chain and RoundLock, which is the toughest lock I've ever tested, and which doubles as a disc lock. Coming in at £101.25, this is a brilliant deal.