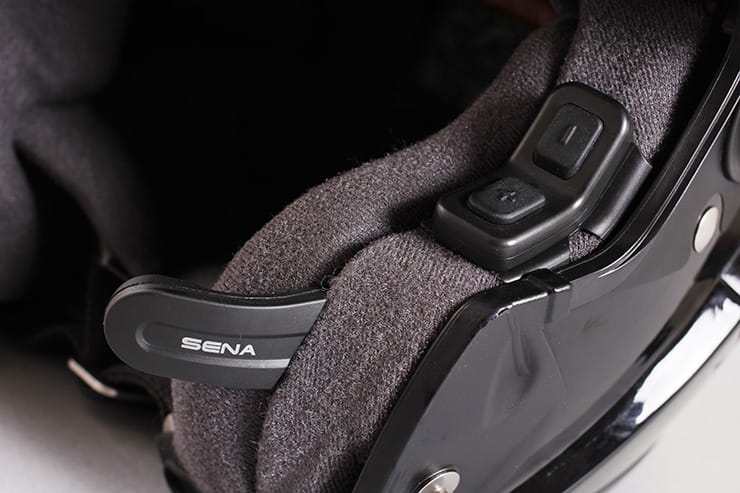 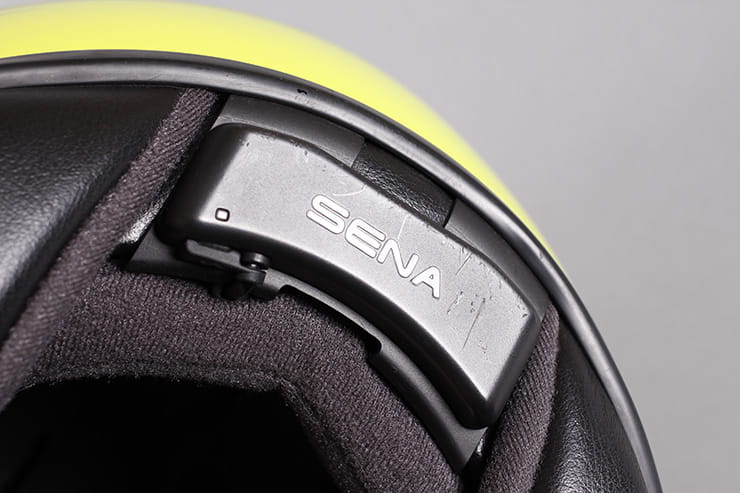 The Sena 10U tested here is designed specifically for the Shoei Neotec, but it’s also available for the Shoei GT-Air and Arai full-face lids. It’s mostly hidden inside the helmet, rather than using an external box like the majority of universal products. I’ve had it installed in my Neotec for the past couple of years…

The 10U requires no adhesive or other kit to fit into the Shoei Neotec, and tucks neatly in place behind the lining, the speakers clipping into place with the cheek pads. There are no exposed wires, and the microphone is an unobtrusive, solid, curved design that doesn’t get in the way when putting the helmet on or opening/closing the front. A foam cover is built into the mic, which doesn’t slide off so isn’t prone to getting lost.

None of the parts touch my mouth, so while the foam mic patch can’t be replaced, it’s still showing no signs of wear at all.

The printed ‘quick-guide’ is enough to get you started, but there’s also an iOS/Android app that gives you full instructions, and allows you to set up speed dials for the phone and radio stations.

The Sena connects only via Bluetooth, and can work with smartphones, sat-navs and other intercoms to communicate with pillions and other riders, stream music and hear directions. 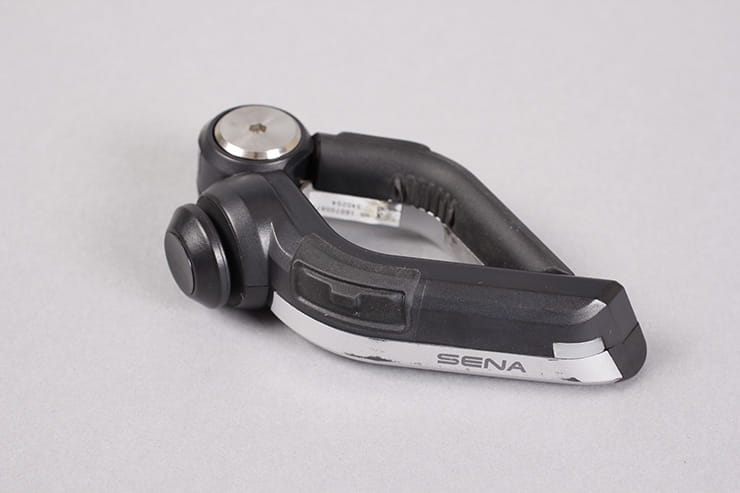 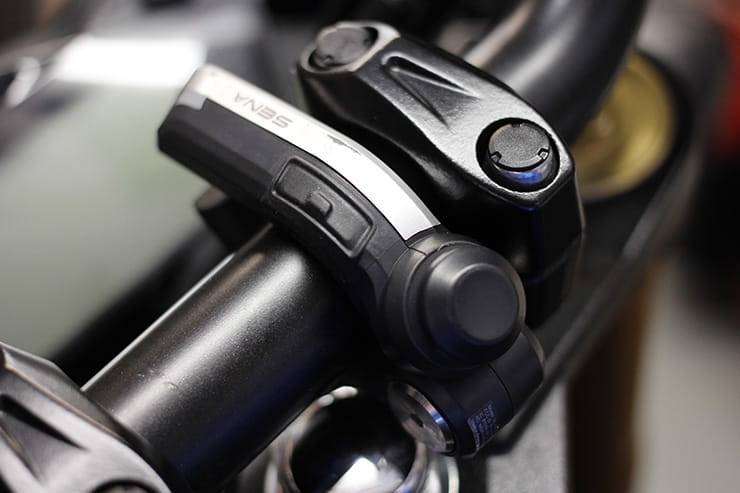 The unit is turned on and off using the two buttons on top of the left cheek, inside the visor aperture. Most functions can be accessed using these, though of course you’ll need to open the visor to get to them – not ideal at speed. Also, skipping songs that are streaming from your phone takes a three second hold, or activating the FM radio takes a five-second hold, which is a lot of time with your hand off the bars.

However, supplied with the 10U is a full-featured remote control, with a four-way joystick that also acts as a push-button, as well as two more buttons. Designed to fit to the left handlebar, this makes operating the device simple, but on my KTM 1050 Adventure with brush guards, it cramped my had too much. It’s not a real problem on other machines, and I’ve just placed it on the centre of the bars, between the risers. I’ve also done this with my long-term-test Suzuki GSX-S750, but on bikes with clip-ons, you’ll have to pop it on the grip.

Starting music requires a one-second press of the joystick, and on firmly-sprung bikes this can be a bit of a fiddle as your hand bounces about. It’s not a real problem on smoother bikes, and it only affects music streaming, but I’d prefer a slim button array on the side of the lid, especially as I regularly swap bikes, and if I forget the remote I struggle to get the best from the device. The new RC3 remote could be the answer, though it adds £47.80 to the price of the setup if you want to go down this route. 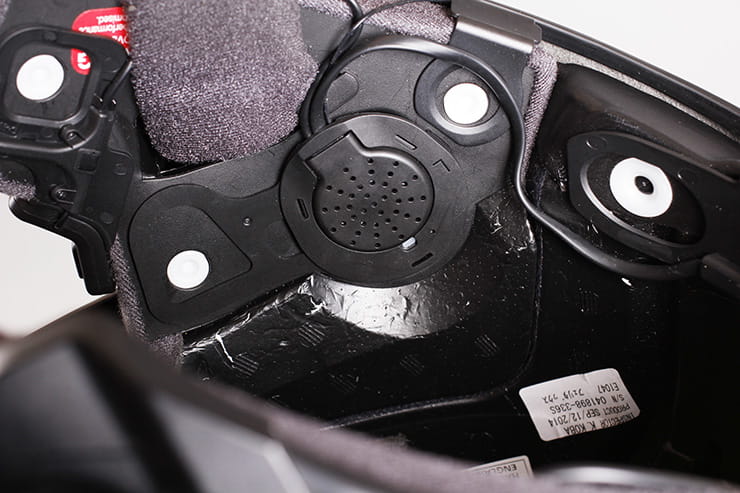 This is one of the loudest intercoms I’ve used, with brilliantly clear audio thanks to the large speakers – with my wife connected using a Sena 10S, it sounded like she was speaking directly over my shoulder.

I always wear earplugs when using an intercom – it blocks out the helmet noise, and meant I was able to hear my wife at 60-70mph. Not wearing earplugs, and with a noisier helmet than my Shoei Neotec, she could only hear me up to about 45mph.

The quality of conversation you can have over the phone or by intercom will vary greatly depending on your helmet – I’ve found that lids with poor sealing around the neck suffer most, but the Neotec and 10U allow conversation up to legal limits.

The Sena allows you to have a three-way conversation with other devices, or up to four-way with other Sena users. You can also have a three-way conference telephone call, which isn’t a feature I want, but if you download the full instructions from Sena you can get a better feel for whether the system meets your needs. You can also share music with another intercom user, who can control the tunes. Activating the intercom pauses the music.

Rider to rider range is in line with other devices I’ve tested, the connection cutting cleanly in line of sight at 790m, and reconnecting automatically at about 500m. In town, I found it broke at just under 400m, coming back at 210m, and in a housing estate, the signal was lost at 140m, after putting a house between us. 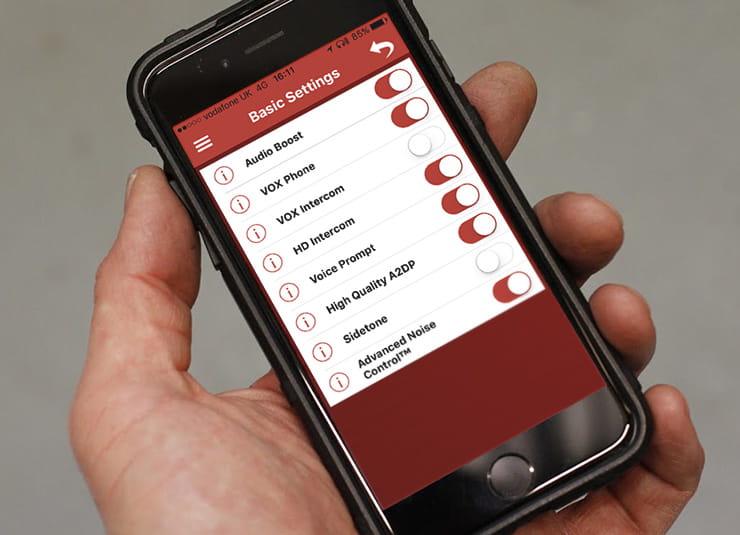 All Sena devices I’ve used have been rather quiet out of the box, but download the app to your smartphone, or use the desktop programme, and you can activate ‘audio boost’, which increases the volume. The 10U is now the only intercom I’ve used that doesn’t need to be at full volume when wearing earplugs at motorway speeds and beyond.

The RDS FM radio can store ten preset channels, along with a ‘temporary preset’ mode that’s reset when the device is turned off. You can set the channels in the app, though while tricky, it is also possible without it. It’s important to activate the ‘RDS AF’ option, to ensure the strongest signal is always picked up, but despite the built-in antenna, the radio is no better than other intercoms I’ve tried… it’s pretty hopeless in all but the strongest signal areas. 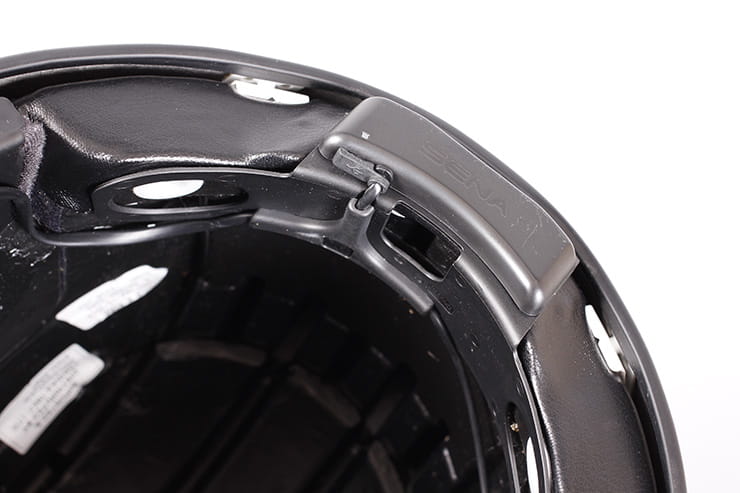 Battery life is claimed at 10 hours, but I achieved just under 12 hours of constant music at full volume. Unfortunately there’s no graphic or spoken indication of the remaining charge, though my iPhone shows the Sena’s current level when connected. Charging takes around three hours using a standard micro-USB.

The remote is claimed to last several months between charges (again, via USB), and in around two years of use, I’ve only charged it twice.

All Senas I’ve used can be connected via USB to a desktop app, to fairly easily update the firmware. While it can’t unfortunately be done via Bluetooth with the smartphone app, it does work on both PC and Mac.

Despite some small issues with the remote, and the usual poor FM radio, the 10U is an excellent intercom system. The fact that it doesn’t foul the flip-up chin on the Shoei Neotec, and that it’s got such superb volume, clarity and battery life, means that it’s well worth considering.