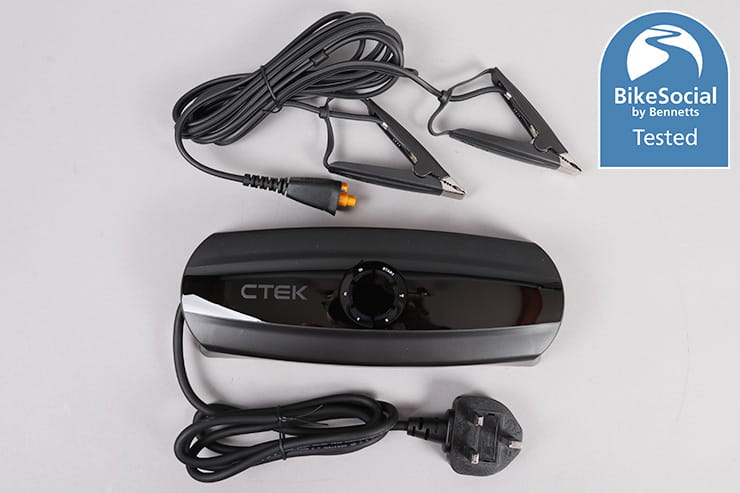 The CTEK CS One on review here is claimed to be one of the most advanced – yet simplest to use – motorcycle and car battery chargers on the market. The crocodile clamps are both black as it doesn’t matter which way round they’re connected to the battery, and it automatically detects whether it’s hooked up to a lead-acid or a lithium pack.

Awarded the Auto Express Best Buy of 2021, its price of £219 makes it the most expensive charger we’ve ever tested at BikeSocial.co.uk, so I’ve been using it with my BMW S1000XR, as well as several other bikes, cars and batteries from various sources… 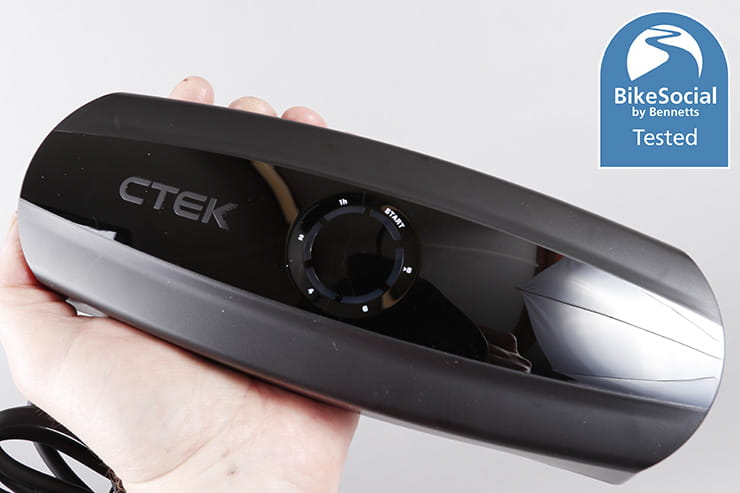 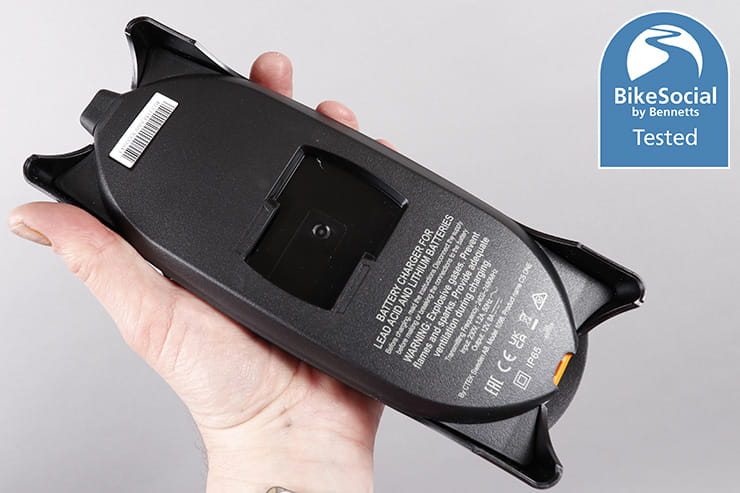 The first thing you notice on the CTEK CS One is the pair of black crocodile clips; when charging, it doesn’t matter which way round these are connected to the battery as the unit will sort itself out. Inside the sleek black unit is where you’ll find the most interesting features though…

CTEK points out that its charger has a low back-current drain, which is the amount of current it pulls from the battery if it’s connected, but not plugged into the mains. Claimed to be the equivalent of less than 1.5Ah/month, this should mean your battery won’t be flattened too quickly if you forget and leave it unpowered (my BMW S1000XR has an 8Ah battery).

The output voltage current is also claimed to have a low ‘ripple’ of under 4%, which is said to be better for the longevity of the battery, and safer for anything connected to the battery while being charged (like your ECU). Ripple is the amount of ‘leakage’ from the AC input into the DC output, and should be low in all decent electronic devices. 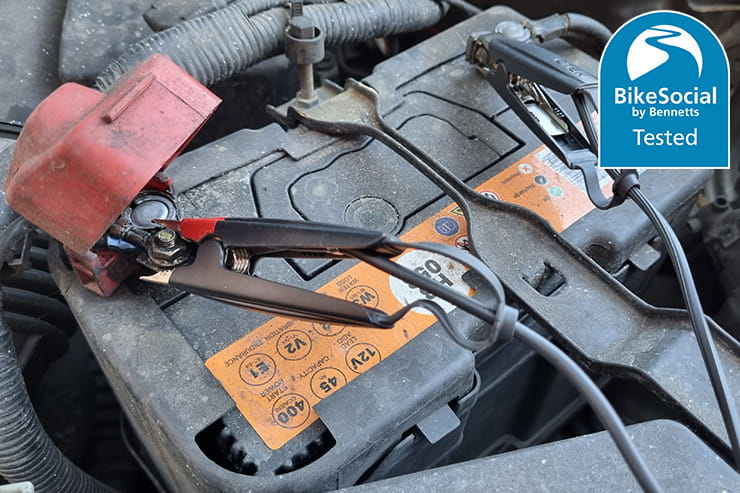 Most motorcyclists will be wanting to use the CTEK CS One as a maintenance charger, where it’s left connected to their bike to ensure it’s always ready to go. While older machines had little to no current drain, meaning a battery could last several months before self-discharging (though it will still be degrading as sulphate crystals build up inside), modern machines have more complex electronics that will be pulling some current even when the bike’s turned off. And that’s before you add an alarm or tracker, which can – in some circumstances – see a battery flattened in a matter of weeks.

I always keep my bikes plugged into maintenance chargers (from the basic Optimate 1+, now replaced by the lead-acid & lithium-compatible Optimate 1 Duo) up to devices like this CTEK. If your bike’s battery is healthy, you’re unlikely to need much more.

However, while some more basic chargers will be able to juice a fairly discharged battery, and may help reduce the sulphation that’s occurred in a neglected pack, they might not have the full recovery modes of some of the more premium models that will work harder on a deeply-discharged battery.

It’s also very important to understand the output current capabilities of a charger – the Optimate 1 Duo, for instance, outputs just 0.6A and is only suitable for lead-acid batteries from 2 to 29Ah, or lithium packs from 1 to 8Ah. It’s not suitable for cars.

The fact that the CTEK CS One automatically regulates its output current to suit the size of the battery it’s connected to – up to a maximum of a very hefty 8A – means it can charge the smallest motorcycle batteries as well as some of the biggest you’ll find in cars. 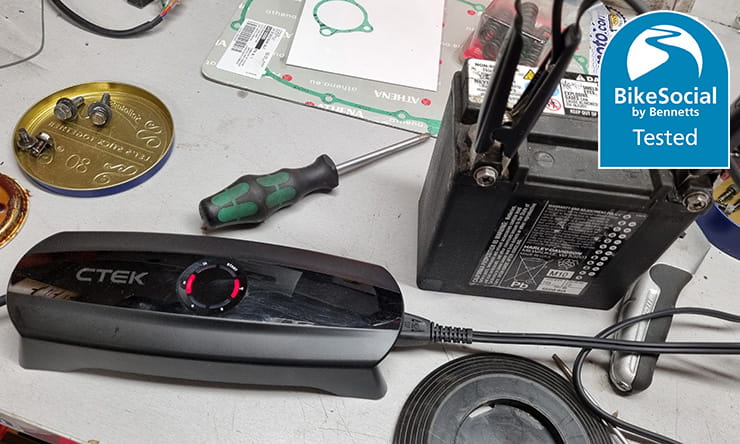 None of the chargers I tested could rescue this battery

Many motorcycle chargers have a ‘rescue’ or ‘recovery’ feature that can help get deeply-sulphated batteries back up and running. While this can get your bike going if it’s been left for a long time, it won’t revive the most severely neglected batteries, as I found out while testing on a friend’s Harley that had been left standing for two years. None of the chargers I have from Optimate, Telwin, Wemoto or CTEK would resurrect this with any of their modes.

Premium motorcycle chargers – the CTEK CS One included – will often automatically enter a desulphation mode during the early stages of charging to break up the crystalised lead-sulphate that occurs when a lead-acid battery is left to discharge itself.

This isn’t to be confused with the ‘Recond’ mode of the CTEK, which is for traditional ‘wet’ lead-acid batteries, not the AGM packs we usually see in bikes that don’t have the acid and water sloshing around inside, which can become separated.

I’d love to definitively test which charger has the best recovery mode, but I simply can’t work out a way to have consistently degraded batteries.

The supply mode of the CS One delivers 13.6V at up to 8A, which would allow you to disconnect the battery while still keeping any settings etc in the bike. A lot of maintenance work requires the battery to be disconnected for safety, but it could be useful in relatively high-drain situations where you don’t want to have the engine running but need power. 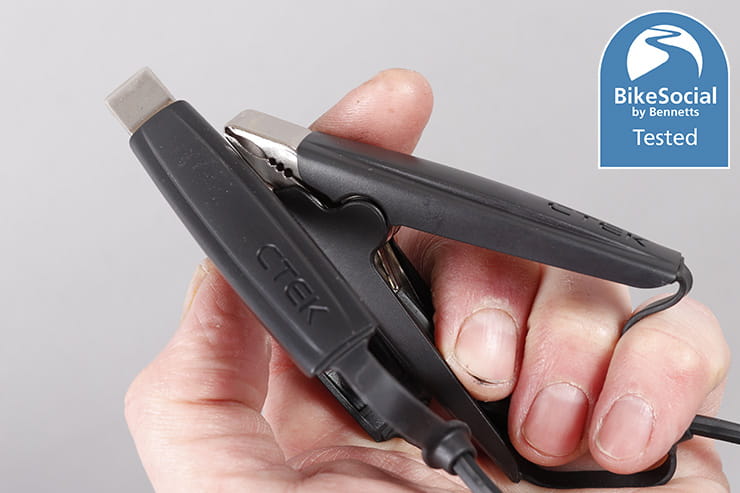 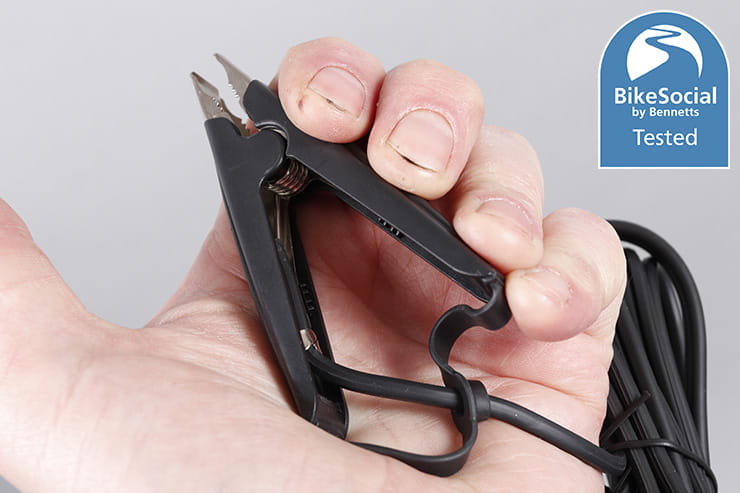 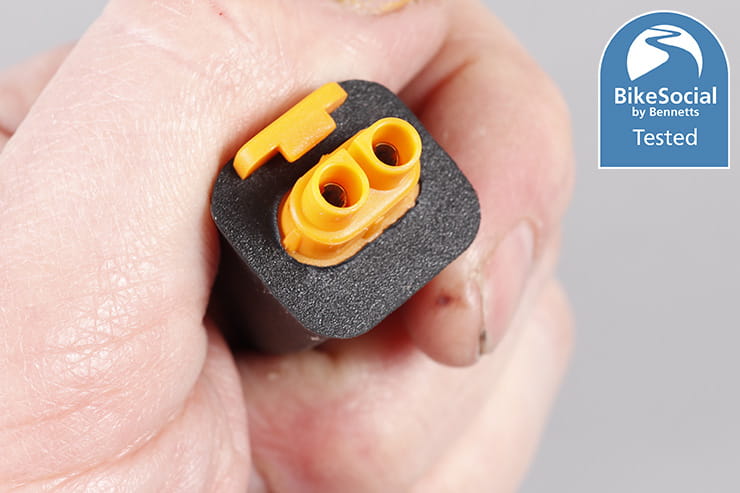 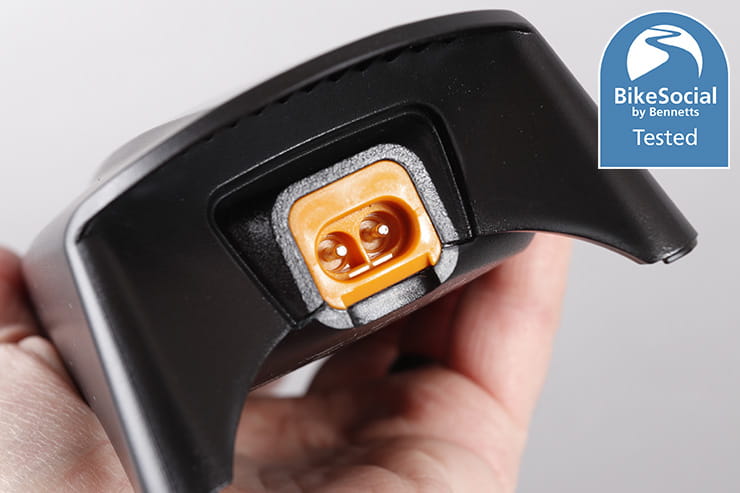 The crocodile clips are well made, but note that the charge has a unique connector

For many users, having two black crocodile clips will be great as they don’t need to worry about which to put where on their car or bike battery, but in both ‘Wake up’ (worth a try on a deeply discharged lead-acid battery, or a lithium pack that’s locked up through under-voltage protection) and ‘Supply’ modes the connections are NOT polarity-free; you must put the crocodile clip attached to the longer lead onto the positive of the battery, the shorter one going to the negative. You’re warned of this when changing modes in the app, and the unit’s over-voltage protection should trip in if you have it wrong, but I wouldn’t want to risk this on my own bike or car’s ECU.

Maybe it’s because I’m fairly comfortable working with the electrics of my bikes and cars, but I’d have preferred to have one red and one black crocodile clip. I painted mine, so I’d be sure in future. 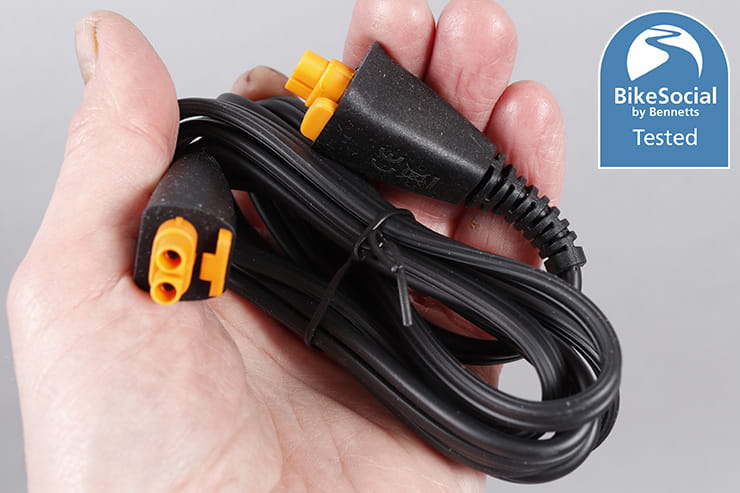 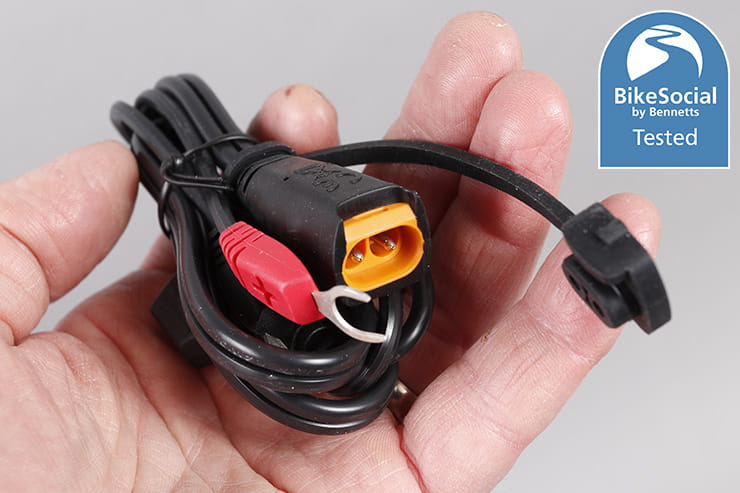 Turn on the CS One after connecting it to your battery and the LEDs on the front (which can be dimmed slightly via the app) will cycle for a few moments, then show the estimated charge time remaining of more than 8 hours, 6 hours, 4 hours, 2 hours and 1 hour, before finally pulsing to show that the battery is full and the unit has entered ‘maintenance’ mode, to keep the pack at its best.

Given the automatic detection of the size of battery you’re charging – from a scooter to an SUV – the CTEK CS One is likely to be working as fast as it can, delivering the highest current for that pack.

I asked CTEK how the charging works on the CS one, and they kindly gave me a lot more detail…

The CTEK CS One uses ‘APTO’ (a proprietary adaptive charging algorithm), with phases throughout the charging process that the company says have the device constantly reacting to the changing requirements of the battery. Influences such as ambient temperature, state of charge and health, and battery technology will all vary, so the precise output from moment to moment will vary. However, these phases run in a similar order to some other chargers…

The CTEK CS One doesn’t have a ‘storage’ mode for lithium batteries, which when not in use for long periods are best stored at below full charge. Shorai’s dedicated BMS01 will maintain the brand’s lithium pack at between 60% and 80% when put into ‘Store’ mode, and can also balance the cells inside (ensuring they all charge evenly). 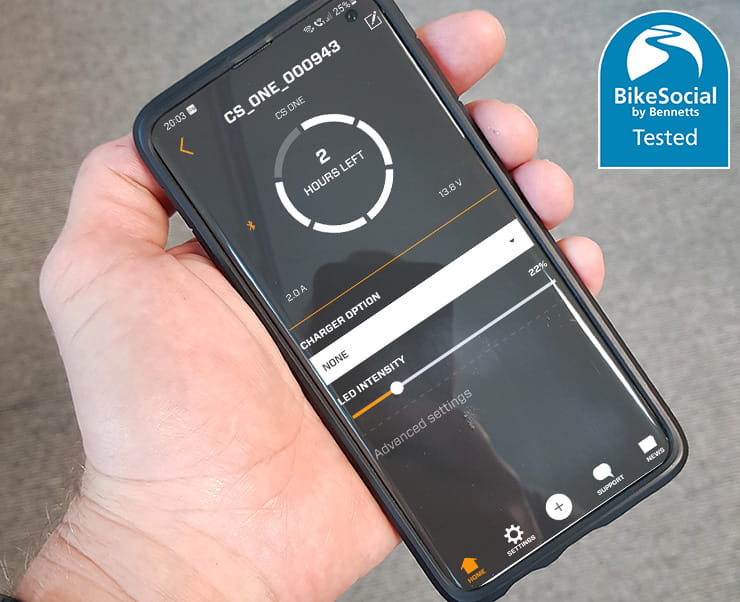 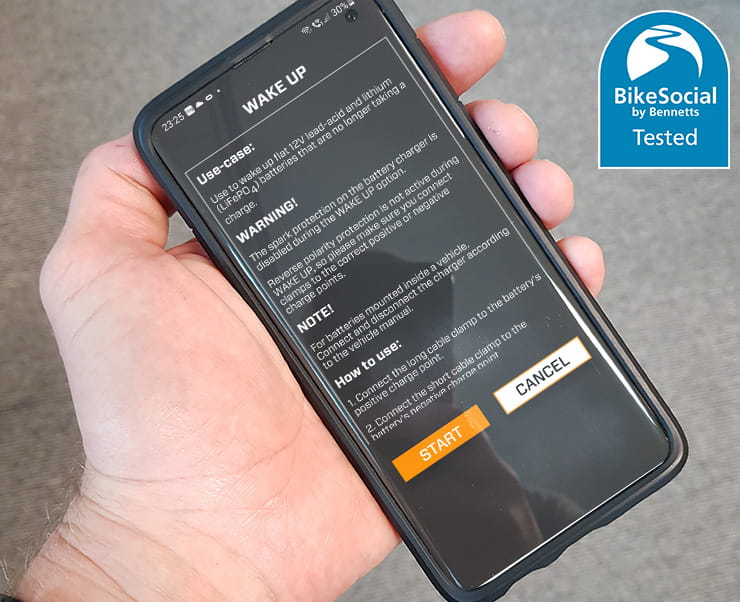 As with most chargers, general day-to-day use requires nothing more than plugging the CS One in and turning it on. However, with no buttons on the unit at all, if you want to access ‘Wake up’, ‘Recond’ or ‘Supply’ modes, you have to use an app on your Android or iOS phone.

The CTEK app also shows the status of the charger, so as long as you’re in Bluetooth range (I can sit in the living room that’s next to the garage and easily connect), you’ll know how long it’ll take before the battery is full, and what the current and voltage being fed to the battery is. As a geek, I love this, but I wish it would display more detail, for instance plotting a graph of the output against time. Pointless for most users, but something I’d feel quite pleased to have access to.

Unfortunately the app demands that you set up an account before it will connect to the charger. While this is irritating, it only takes a few minutes before you’re up and running. What’s infuriating though is the fact that about every two weeks it will demand that you log in again before it opens. Unless you can remember the password you set up, you’ll have to reset it; something I’ve needed to do way more times than I should to use all the features of a £219 charger. It’s also disappointing to see some spelling mistakes in the app, though these will likely be fixed in updates.

My Telwin charger has a single button on the front for changing modes, and a quite descriptive LCD screen, so while it doesn’t have the user-friendly and safer automatic selection of output current and battery chemistry, it’s potentially less hassle for a more experienced user.

The CTEK though is designed to be extremely effective and simple to use for almost anyone with any vehicle, so while I’d like to see an OLED display with live output data and mode options, that’s not what the vast majority will be looking for when buying a charger they don’t have to think about. 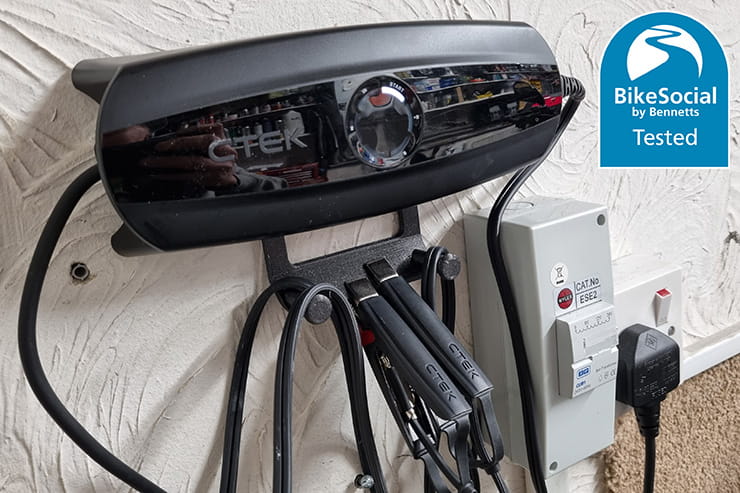 CTEK does make a wall-mounting bracket for the CS One, but I designed my own and 3D printed it (I told you I was a geek).

I prefer not to judge most products on price, but there’s no avoiding the cost of the CTEK CS One. If you’re going to use it on cars and motorcycles, and if you need to charge lead-acid and lithium packs, the investment can make sense, but it’s quite a pricey option, even compared to two separate decent-quality car and bike chargers.

The integration with the app has great potential, but thanks to it demanding that I log in every couple of weeks to see the settings and change modes, I find it extremely frustrating.

Overall though, the CTEK CS One makes day-to-day charging quick and simple, and I really appreciate the relatively high output current of up to 8A; this is something I can connect to any vehicle without worrying about it being underpowered or not suitable for the type of battery fitted. There are chargers capable of higher current, but very few that can also safely charge the packs used on motorcycles and scooters, which can be as small as 6Ah.

Batteries are not cheap, so keeping them well maintained is well worthwhile. If you want an extremely easy day-to-day charger that works across a large range of vehicles, and can deal with LiFePO4 as well as lead-acid, the CTEK CS One is worth considering.

Be sure to regularly check for discounts available through BikeSocial membership – members save 10% at Halfords, which is one of the retailers for this charger.