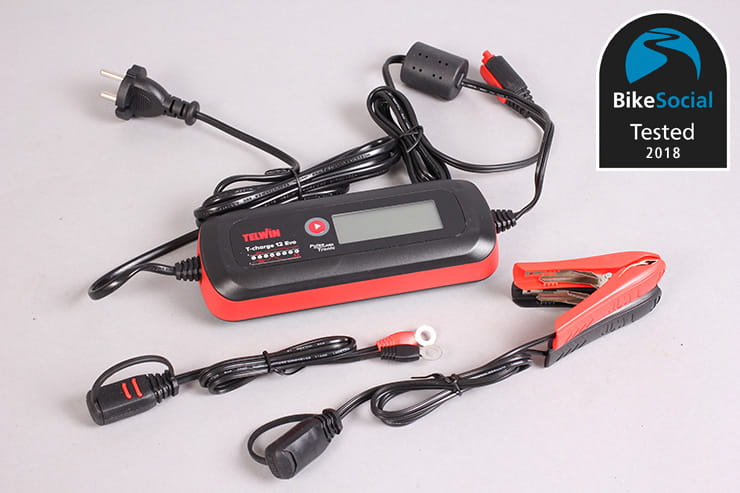 I’ve been using the Telwin T-Charge 12 Evo for several months now, to charge a KTM 1050 Adventure, Honda MSX125, Suzuki GSX-S750 and a Honda CR-V 4x4. The device available in the UK from Basic Welding Services ltd in Manchester , or via the online shop at www.weldshop.co/en.

Selectable 1A or 4A output

Can also be used to charge lithium batteries 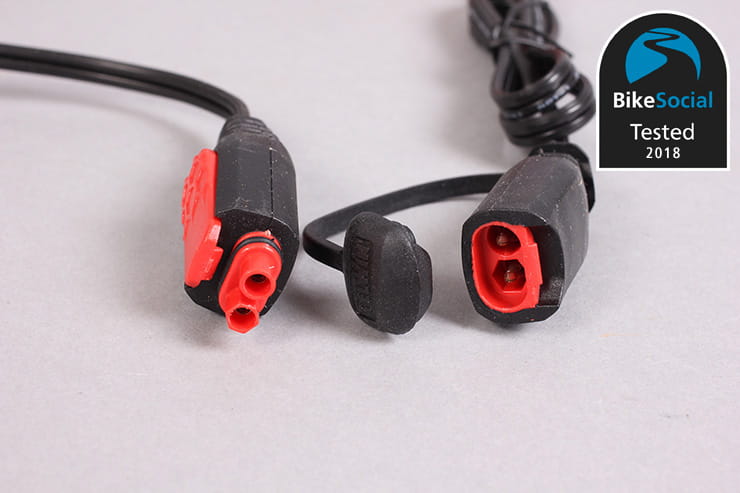 The T-Charge 12 Evo is supplied to the distributor with a Euro mains plug fitted, but the UK supplier – Basic Welding Services – swaps it for a UK one before shipping from its Manchester store.

The mains cable is 1.60m long before it reaches the unit, then the cable to the battery runs 1.34m before it’s terminated in a latching two-pin connecter that’s similar in design to (though not compatible with) Tamiya-style blocks. This is a similar connector to that used by CTEK and Yamaha (rebranded CTEK), and includes a dust cover. But while it looks the same, the polarity is switched compared to the CTEK, and doesn't quite fit. It’s not as universal as the SAE connectors used by Optimate and Battery Tender – which are also used for some other motorcycle electrics – but it is secure and tidy.

The charger comes with two cables that connect to the end of the lead – one with a pair of crocodile clips on, and another with ring connectors, which you can attach to your bike’s battery, making it easy to just plug in and charge. Disappointingly, this doesn’t come with an inline fuse; while the design of the connector would make a short very unlikely, it’s still not something I’d risk, so would recommend wiring a fuse into the lead if you leave it attached to your battery.

In my case, I already had a fused SAE connector on my bike, which I connect to other things on occasion, so simply made an adaptor lead that plugged into the Telwin, and terminated in an SAE.

With a total length of just under three meters from the wall plug to your battery, it’s not hard to reach across the garage to your bike if necessary.

While the T-Charge 12 Evo can't be connected to the auxiliary power port on CANbus-equipped BMWs, it is still safe to use with a direct-to-battery connection. To avoid damage to the sensitive electronics in motorcycles, the voltage must stay stable below 17-18V. In a standard program, the Telwin never goes above 16V, while in Gel and AGM it doesn't exceed 15V, so it safe to use. I've run it on a BMW S1000XR with no problems at all. 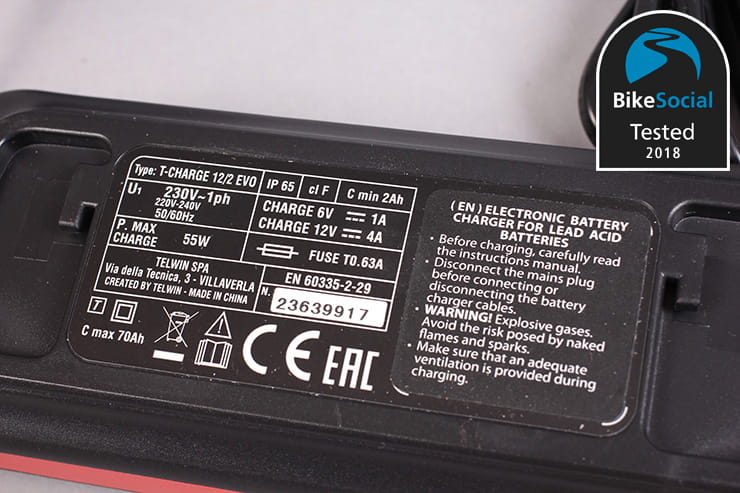 While most automotive batteries are now 12V, owners of classic machines will appreciate the 6V charging option; I used it to charge my daughters toy quad bike. If you select the incorrect voltage for your battery, a warning triangle appears on the LCD, and the Telwin shuts down.

You’ll need to select the correct mode for your battery’s chemistry, but if you do get it wrong, there’s no real risk. Telwin told me that the charging levels are optimised for the different technologies, but aren’t harmful for any connected battery. If you do use the incorrect mode, the final voltage of the battery will be different by a matter of tenths of Volts, and its lifespan won’t be affected.

You can also charge lithium automotive batteries with the Telwin – the desulphation stage used in lead-acid charging can be extremely damaging to lithium cells, so is skipped when using this mode, along with changes to the rest of the programme.

The Telwin can be used to charge pretty much any battery you might find in your bike or car, and with its ability to output 4A in car mode, it will charge larger capacity batteries a lot more quickly than some other units designed for bikes.

When charging a typical lead-acid battery, like other maintenance and recovery devices, the T-Charge 12 Evo runs through several stages, starting with a check of the battery, before moving though a desulphation mode, analysis, main charge, final charge, check, then a float and pulse charge for storage. A recovery mode can also be selected by pressing and holding the single button on the front – this is the desulphation stage alone, and can be used to force the attempted recovery of a very low battery that might fail using the standard programmes. This works by giving a pulsed charge while measuring how quickly the battery’s voltage increases during charging, and decreases when it stops – if the voltage fluctuates too quickly between the pulses it means the battery isn’t storing a charge, and the recovery needs to continue. This stage or mode stops when the battery can hold its charge, or if after a prolonged period it still fails. On a good battery, activating recovery mode sees the device almost immediately show ‘OK’; the warning triangle would display if it failed. 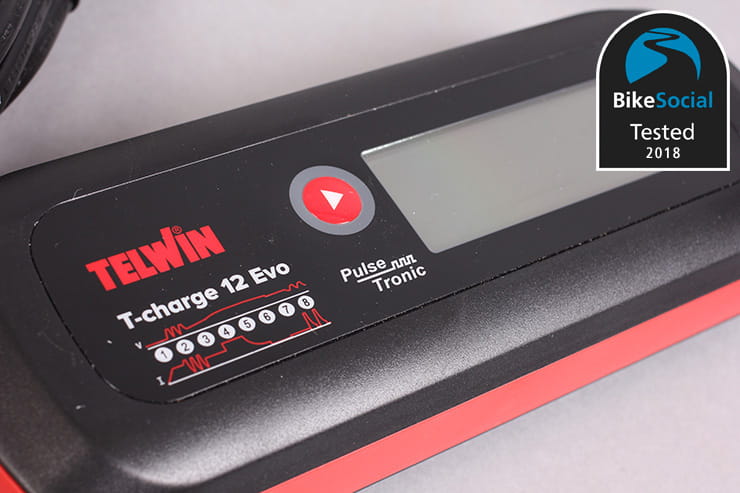 Usefully, there are three test modes on the charger – one that shows the battery’s level, another that shows the cranking capacity of the battery, and finally one to test the alternator. Turn the engine over and, if you get an ‘OK’, the battery has a decent cranking capacity. Switch over to the alternator test with the motor running, and you’ll see whether your vehicle’s charging circuit is working correctly. A really handy feature to have, though it’s a shame you need to have the Telwin plugged into the mains for it to work. If you want to test a battery and alternator while out and about (for instance when buying a bike or car), I recommend the Optimate TS-120 tester.

The back of the charger has small notches that would appear to take a bracket, but there isn’t one available. Without a built-in hanging hook, you’ll need to leave it on a shelf, the floor, or the seat of your bike. 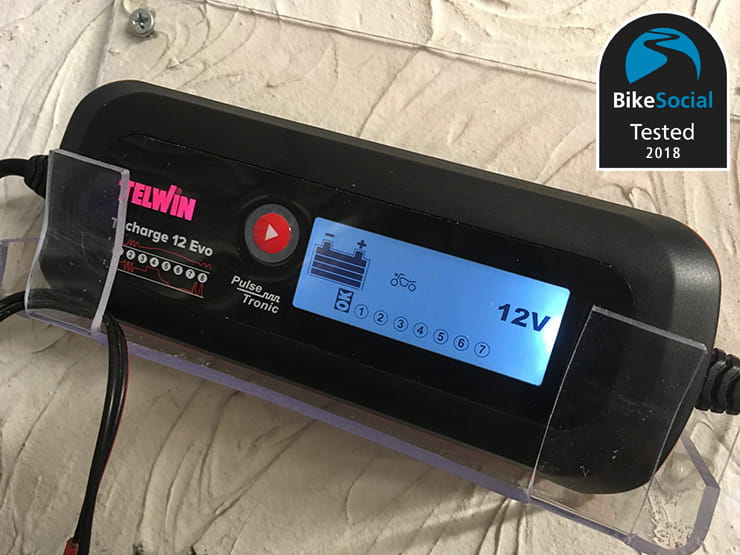 The first time I used this charger was on a Honda CR-V 4x4 that had had its internal light left on until the battery was dead. I plugged this in at night and the battery was sufficiently charged the next morning to easily start the car. It was fully charged by the end of the day.

The T-Charge 12 Evo works flawlessly on the bike, and as soon as you plug the battery in and turn on the charger, you’re given a display of the current charge level. This disappears during the first stages, but then as the main charge cycle begin, you’re shown what state the battery’s in – a great feature as you know if you can get away with unplugging it if you’re in a hurry.

Through the modes of the T-Charge 12 Evo

I found the instructions to be somewhat lacking, but that’s mainly because I wanted to know more about what the charger was actually doing in each mode. A little more detail would be good, but as it’s such a simple plug-and-play device, and the display is so clear during use, it’s not a disaster. With so many modes too, but only one button to select them, it can be slightly irritating if you scroll past the one you want, but it’s only a matter of seconds to get round again; still, a forward and back button would have been appreciated.

Ultimately, while there are a lot of settings on the Telwin, they’re very easy to access and understand, and the unit will remember the last charging mode you were in. The LCD is clear and illuminated, so even in the dark you know exactly what state your battery’s in.

There are cheaper motorcycle recovery and maintenance chargers which may well have all the features you need, but where the Telwin T-Charge 12 Evo really scores is in its versatility; it can charge almost any 6V or 12V bike or car battery, it's simple to use and it's fairly priced. Thoroughly recommended. 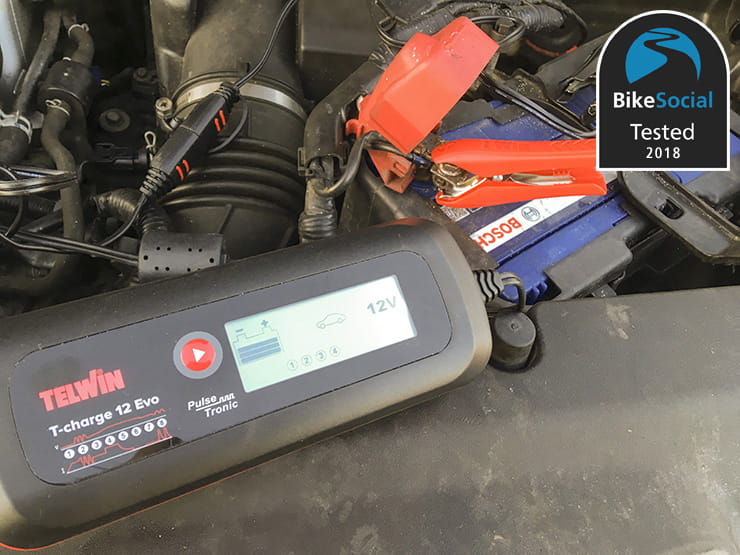 Gel: The electrolyte is contained in a silica gel, into which the battery’s plates are immersed. Not normally used for starting applications as high temperatures found near an engine can cause the gel to expand; low temperatures cause it shrink, reducing its ability to deliver high currents. Not suitable for charging with a standard alternator.

AGM: Absorbent Glass Mat. These batteries have only enough liquid in to keep the electrolyte mats wet, so if the case is broken, no fluid will leak out.

AGM+: These have plates compressed under high pressure to give increased capacity.

EFB: Enhanced flooded batteries can take a greater charge than a traditional pack, and potentially have a longer life span.

Lithium: Lithium batteries are much lighter than lead-acid, and have a greater CCA (Cold Cranking Amps), which is the power they have to turn the engine over. They must not be deep discharged though, and are very sensitive to over-charging. Lithium batteries must not be charged with a normal lead-acid recovery charger as the desulphation mode used can deliver a far too high voltage. They also don’t work well in the cold – in winter, you might need to leave your bike with the lights on for a minute or so to get the electrons moving and ‘warm’ the battery before it has the power to start your bike. Lithium batteries have a very low self-discharge rate, but be careful if your bike draws power when it’s off or has an alarm or tracker.