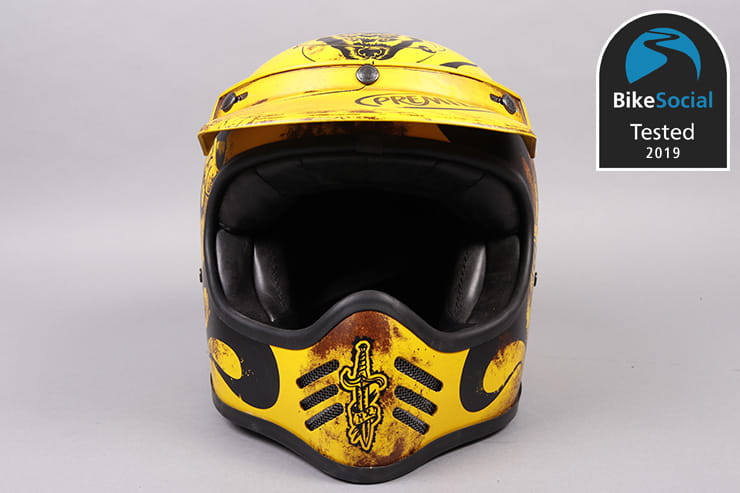 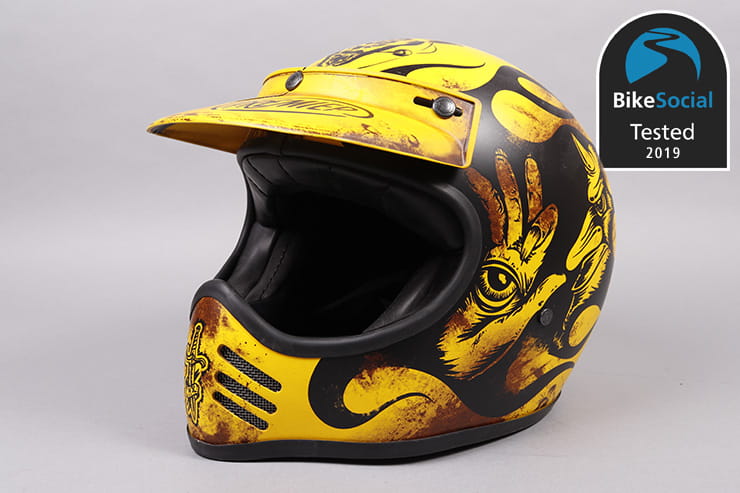 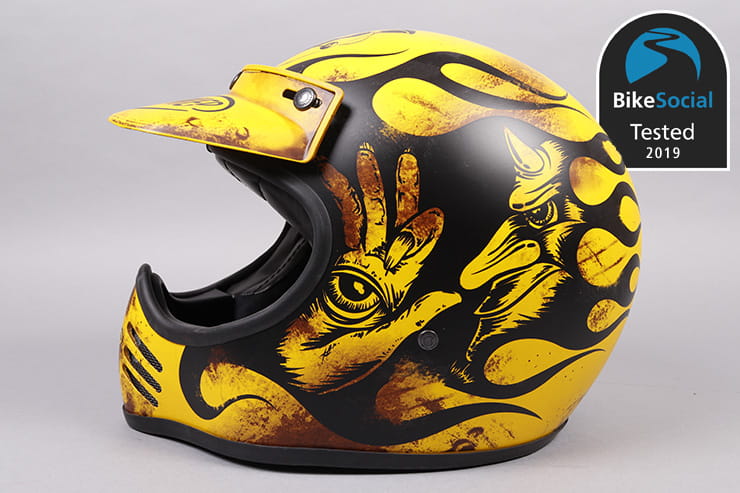 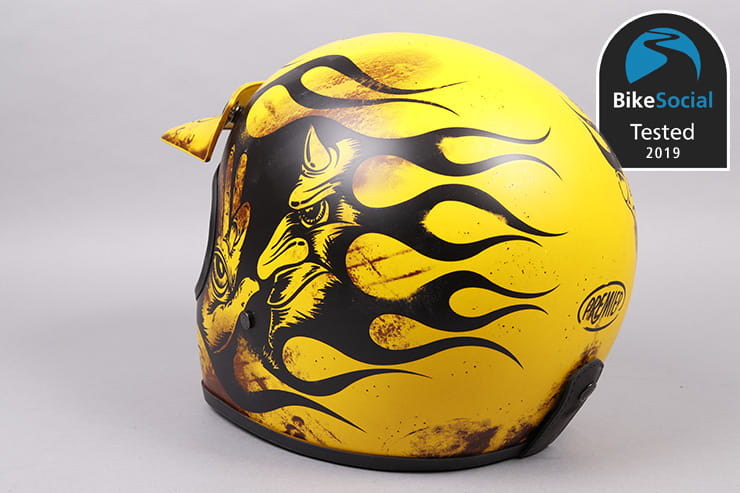 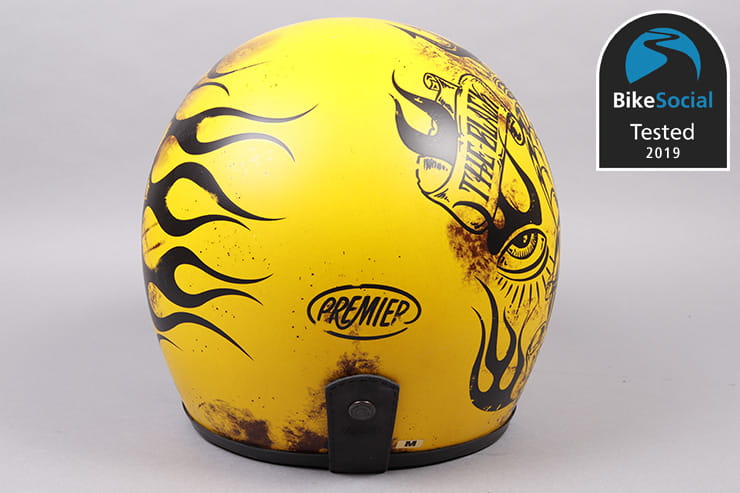 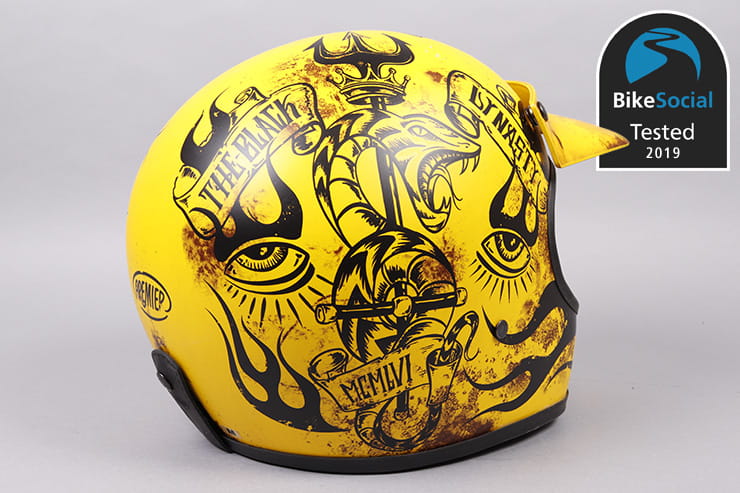 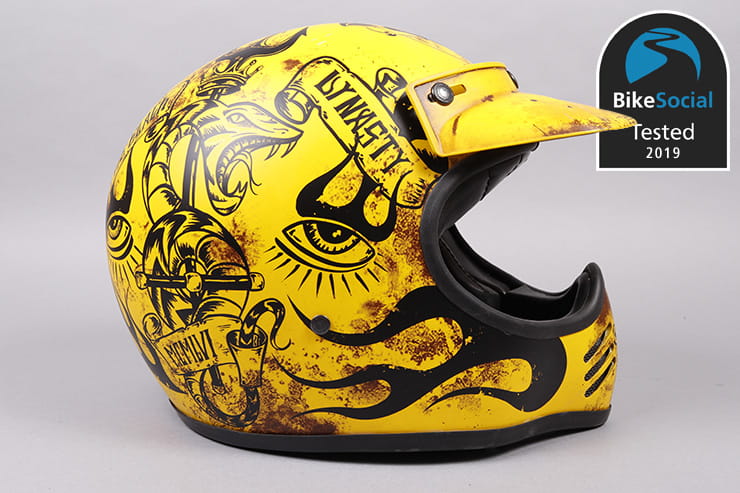 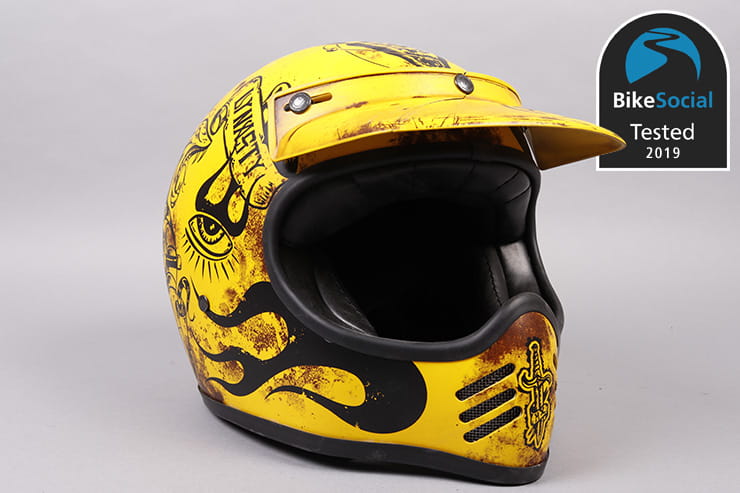 The Premier MX BD Retro motorcycle helmet on review here is targeted squarely at custom and café racer fans. Premier says it’s also ‘perfect for use with the latest generation enduro bikes’, but it’s the street market that this lid’s most likely to appeal to.

I’ve not got a café racer, but I’ve been trying this on my custom Honda Africa Grom, Kawasaki Versys 1000 and BMW S1000XR… 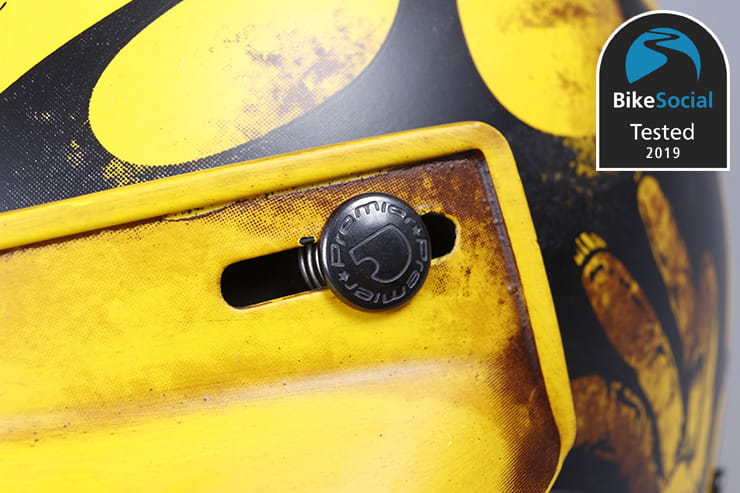 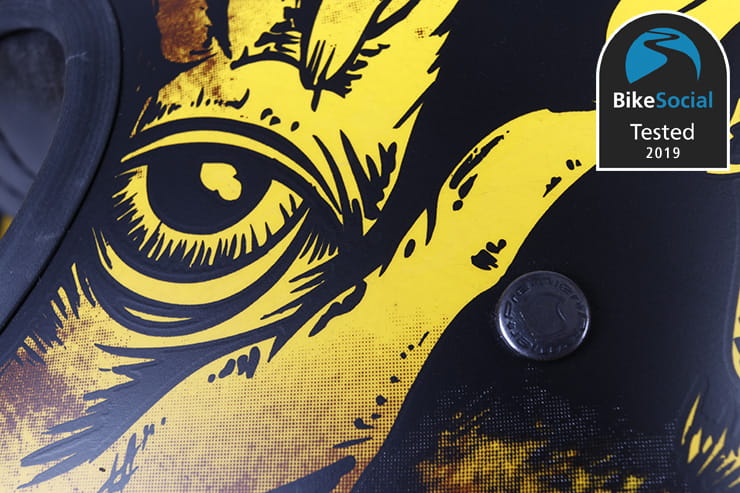 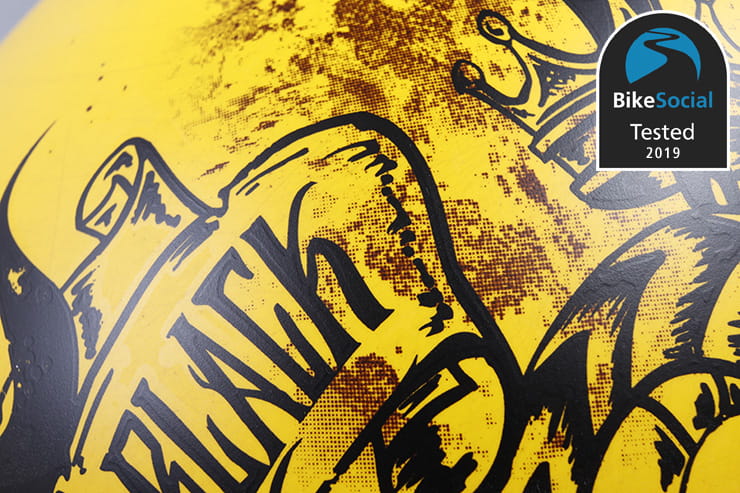 Let’s talk about the graphics first; they’re going to divide opinion, but they’re well applied on a matt paint finish, with a relatively coarse halftone screen in the ‘dirt’ effect. The outer shell is a carbon, dyneema and aramid fibre mix that’s solid but also quite brittle where it’s thin; while carrying the Premier I managed to snap one of the lower bars in the ventilation grills. It doesn’t affect the structural integrity, and you have to look closely to see the damage; it’s due to the design of the slits but not something I expect of a £359.95 helmet.

Poppers on the brow allow the supplied peak to be attached (and they fit other peaks), but this again proved a weak point unfortunately – rolling onto the carpeted floor from just two feet up the lid dropped on the peak and snapped it in half.

I do love the shape of this lid – while plain yellow doesn’t appear to be available any more (a shame, as it looked brilliant), there is a white model available with retro stripe graphics for the same price, as well as a matt black for £279.95. 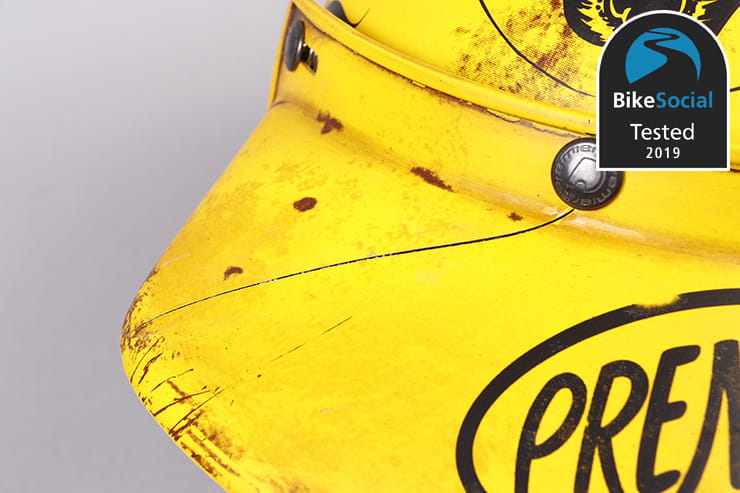 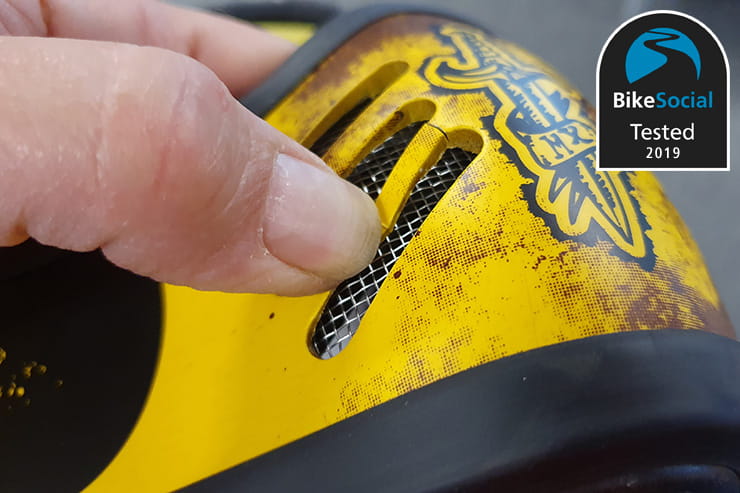 Weighing 1,164g (without the 34g peak) it’s a touch heavier than the similar-looking Shoei Ex-Zero, but you really wouldn’t notice it. This isn’t a heavy helmet by any stretch. 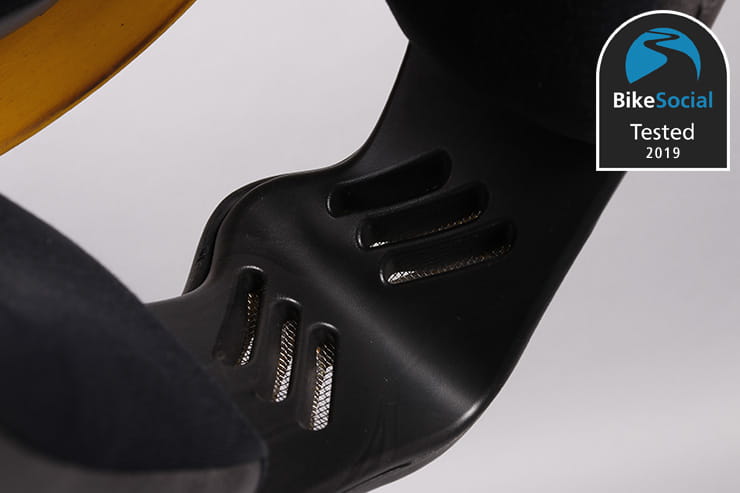 With the large open aperture, even with goggles on this is of course a fairly airy lid, despite there being no top or exhaust vents.

The chin has a permanently open series of six slots to allow air to blast straight through to your mouth. There’s a metal mesh offering protection from stones and bugs (though their guts could still splat through), but no foam to filter dust; only worth knowing if you are considering using this on an enduro machine. 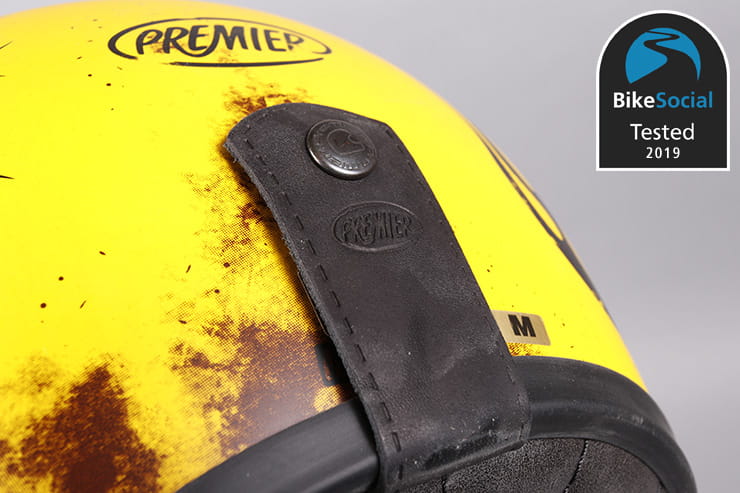 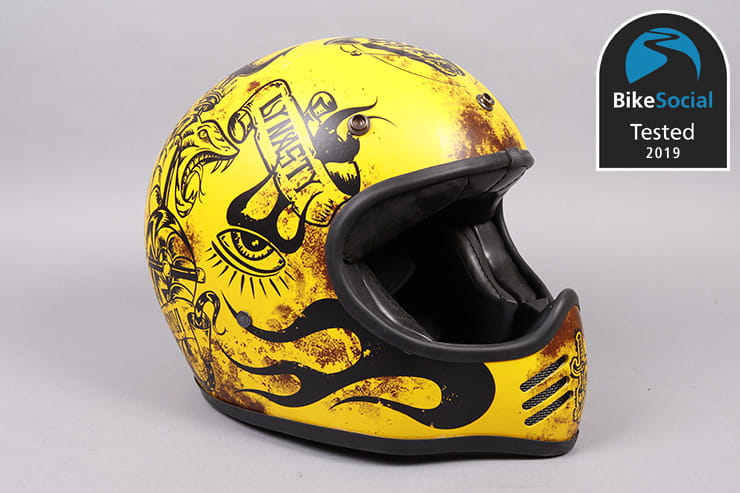 There is no visor, so eye protection is going to come from your own goggles. If you’re looking for this style of lid you’ll likely have also considered the Shoei Ex-Zero, which has a built-in drop-down visor, but wind does whip up into the eyes at times with it. Still, at modest speeds it’s a great alternative to goggles, so while the Shoei is £359.99 for plain colours, but £419.99 for graphics, you need to consider the additional cost of goggles, if you don’t already have any.

Peripheral vision is always reduced when you wear goggles, but I found my 100% Barstow goggles fitted the Premier’s aperture well. The leather tab at the rear keeps the goggles’ strap in place when you pull them up to the top or over the chin. 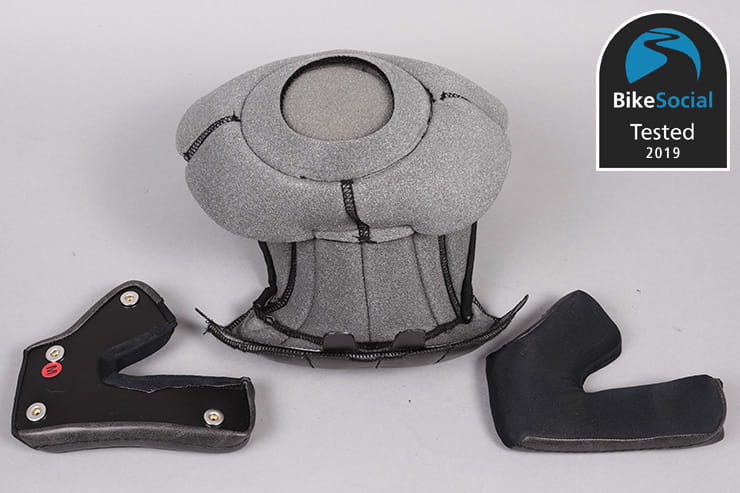 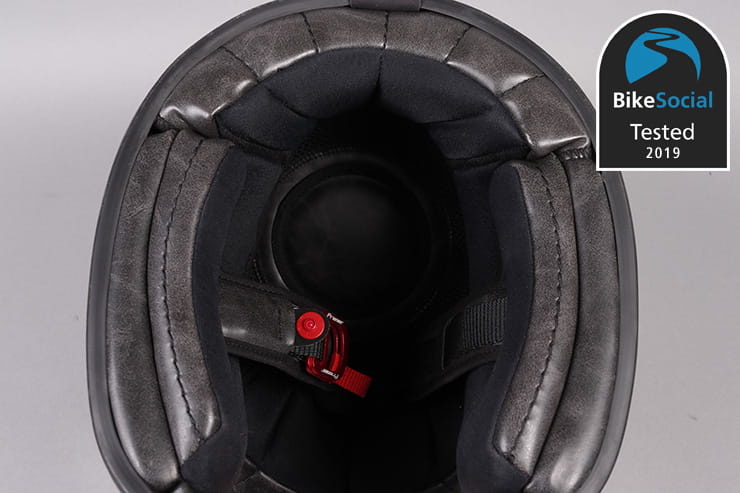 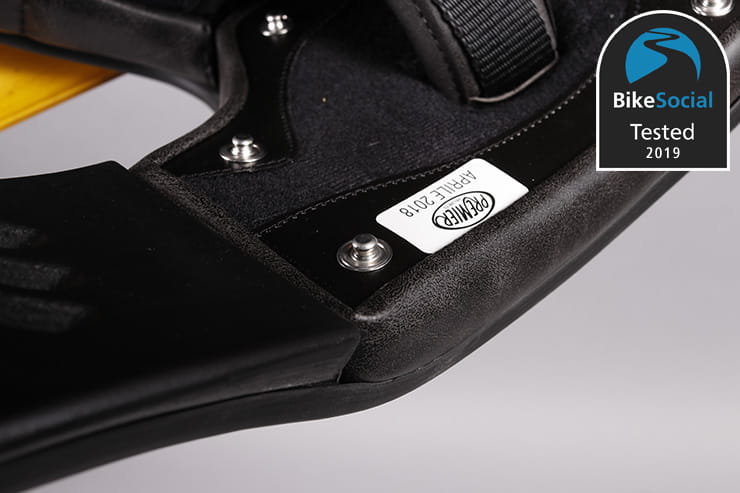 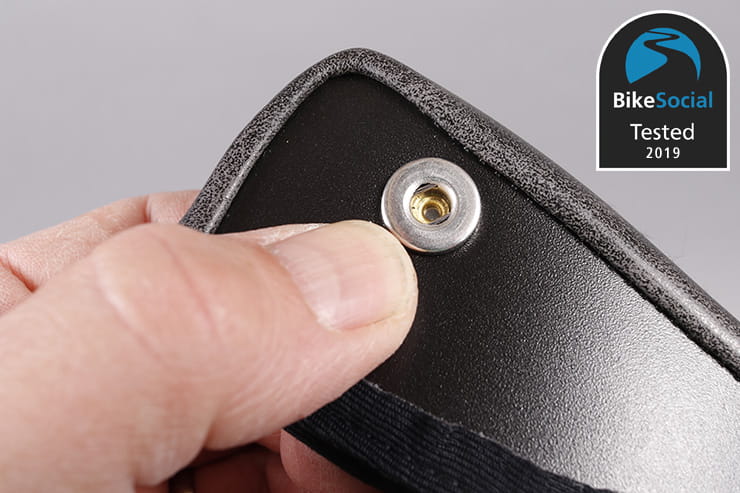 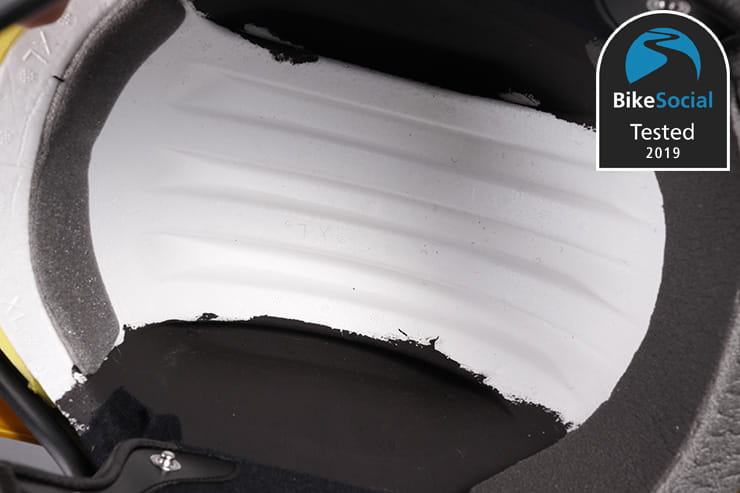 The lining is nicely finished with a leather-effect base that’s easier to wipe clean in grubby conditions.

The cheek pads are held in place with metal poppers and they’re easy to whip out. The skull cap just presses into place at the rear and the brow – it’s a little more fiddly to replace but no great disaster.

The inside of the chin section is a black rubbery material though it’s only lightly glued in – I managed to knock mine out though this would be covered under warranty (I just used a little hot glue). 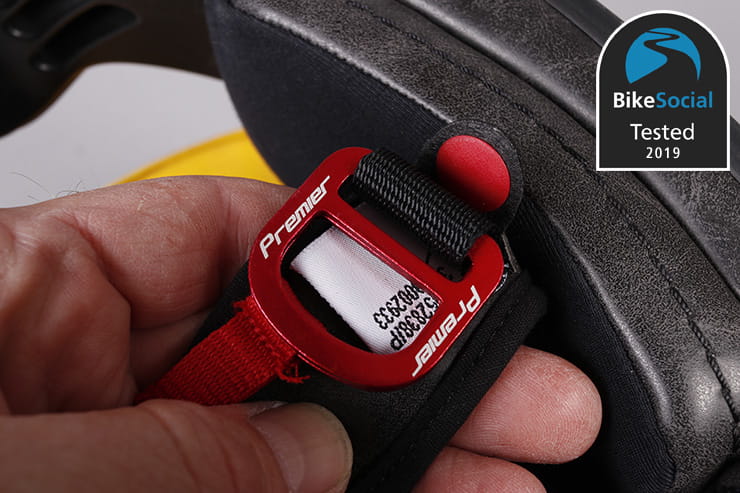 The Premier MX is fastened with a double-D ring typical of classic and sports helmets; here it’s a very nice red anodised finish, with a popper to keep the end of the strap from flapping.

Fit is very subjective, so you must make sure you try any helmet on for yourself before buying. I found the Premier MX has a relatively wide neck opening, so doesn’t grip tightly around the jaw, but the front rubs a bit on my forehead, which isn’t helped by a ridge in the polystyrene liner.

As a glasses-wearer the MX isn’t the best for me as the arms of my specs don’t quite sit in a channel, so are always trying to lift off my nose.

With a huge hole at the front, this is not a helmet designed for quiet touring. It’s not the tightest fit around the ears, but it’s not unusually noisy and it has no strange sounds. Like all lids, you need to wear earplugs. 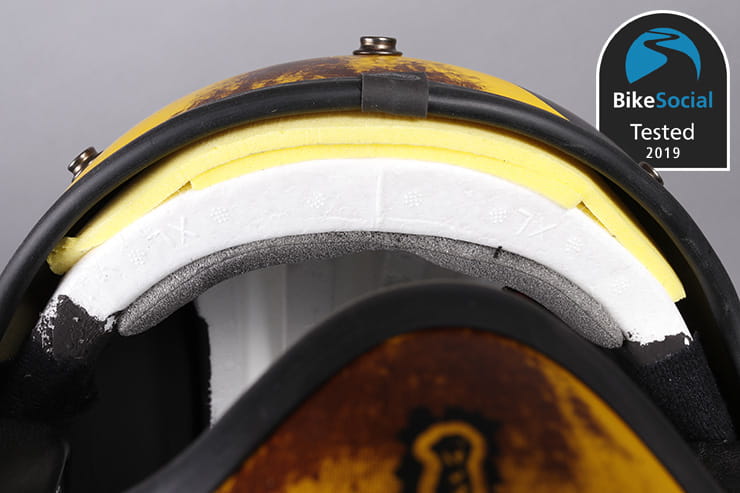 Removing the lining shows a basic polystyrene liner with deep channels to create a ‘softer’ area on the top of the head and pieces of foam stuck in the front and back to keep the lining in place (and presumably contribute to the ECE22.05 impact test results). Combined with the easily-damaged vent slots and peak (although that might have been an unlucky drop), the Premier doesn’t feel or look like a £360 lid. Holding it up in the office estimates ranged from £50 to £199, and that’s the point; while the shell is a complex fibre construction the package doesn’t come together to feel like money well spent.

Unfortunately, the graphics are the main reason to choose this helmet, yet I can’t help thinking that someone who would want this style would probably prefer to do it with their own design…