Introducing a youngster to the joys of biking is a brilliant feeling – the excitement in my daughter’s face when she first got off a bike will stay with me forever. But regardless of how extra-carefully you ride with a child as your pillion, it’s vitally important that they’re safe, with decent protective kit from head to toe.

Eight-year-old Georgie has been wearing a motocross lid when riding her little electric bike – with a pair of goggles it’s been fine for riding around our village, but as she’s gained confidence, she’s been asking to go further on the back of my bike, so has been trying this new Junior 4 from Givi for a month now…

The Givi’s thermoplastic shell is built specifically for a child’s head, hence the ‘YS’ naming of this 50cm lid – the advantage is that you don’t have a massive bowl with acres of polystyrene liner to fill the gap from the smallest adult size.

This one is matt-black, with two more-colourful options also available. The finish is very good, though the lack of any gloss does tend to show greasy fingerprints.

Specified as 1190g (+/- 50g), this YS-size helmet weighs 1256g, which compares to 1646g for an medium adult Arai Quatum ST, and 1332g for the lightweight carbon-fibre Shark Spartan. The Givi’s diminutive mass is excellent for a child, meaning less stress on their neck. 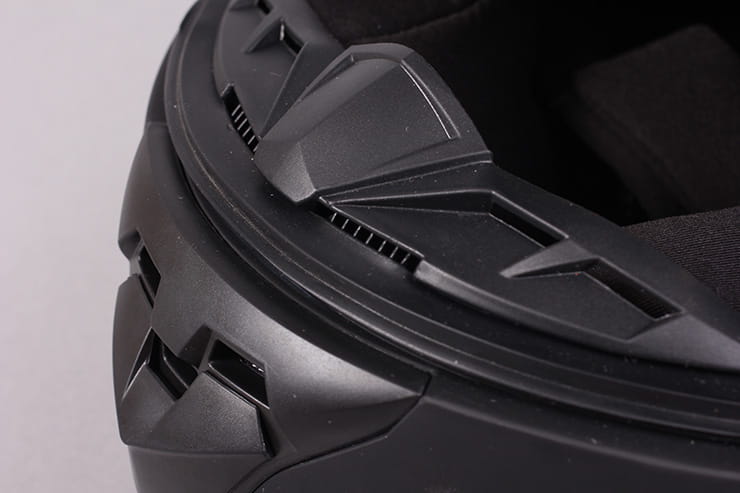 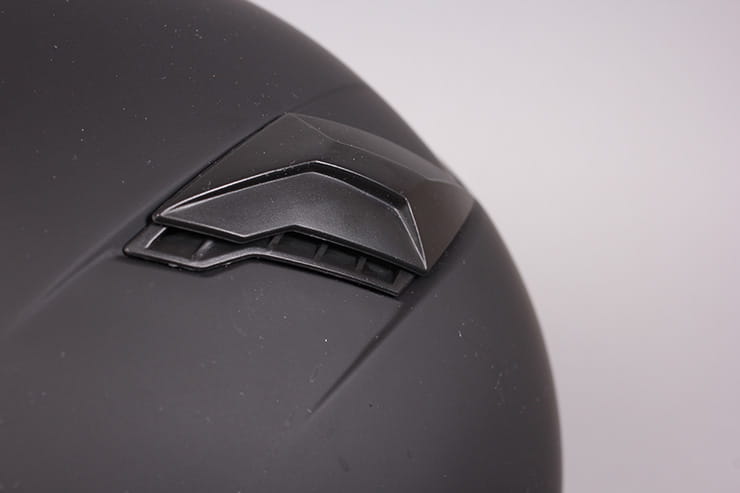 Georgie’s been wearing the Junior 4 during the colder weather, so the ultimate effectiveness of the ventilation remains to be seen in hot conditions, but the chin vent has two positions – open and closed – blowing two channels of air onto the visor. There’s no direct-to-mouth ventilation.

The two separate top vents can be opened and closed fairly easily with a gloved hand, and do blow air onto the forehead. The channels beneath the liner aren’t particularly deep, so air flow to the rear exhaust won’t be as strong as some of the best-performing adult helmets, like Shoei’s Neotec. 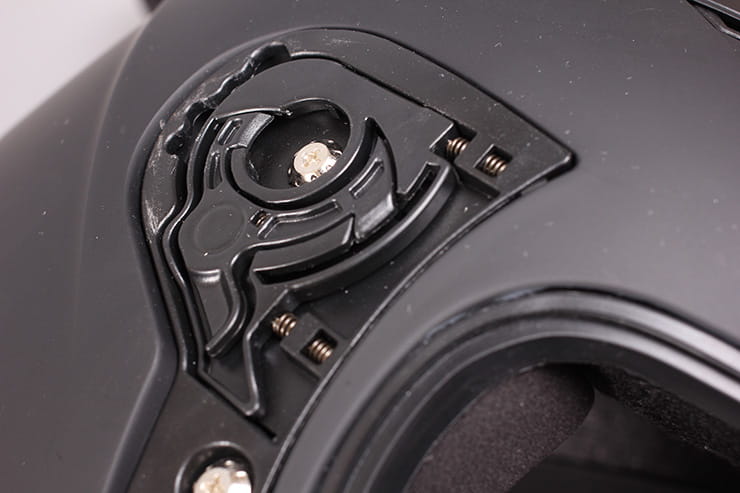 There’s no Pinlock or anti-fog coating on the visor, which is a shame as a child might not realise as quickly that they can pop the visor to clear the moisture. On one ride, I stopped and turned around to see Georgie peering through a wall of fog. I explained that she can pop the visor open to clear it, but she was reluctant to let go of the Oxford Rider Grips pillion belt I had on. Since then I’ve been using FogTech spray from www.visorvision.co.uk to keep things clear.

The seal isn’t bad, but unless you firmly push the visor down, water can creep into the inside edge at one point on the top. Most users of this lid will rarely be using it in the rain, and it’s still a better seal than some adult helmets I’ve tested.

The visor is quite flexible, which combined with the firm, four-position ratchet, means it can be a little harder than some to close as it tends to bend away from the small thumb tab. It works fine, but I’d have preferred something a little more refined.

Removing and replacing the visor is a bit fiddly, but it doesn’t need any tools and you’re unlikely to be doing it as much as you would on your own day-to-day lid. 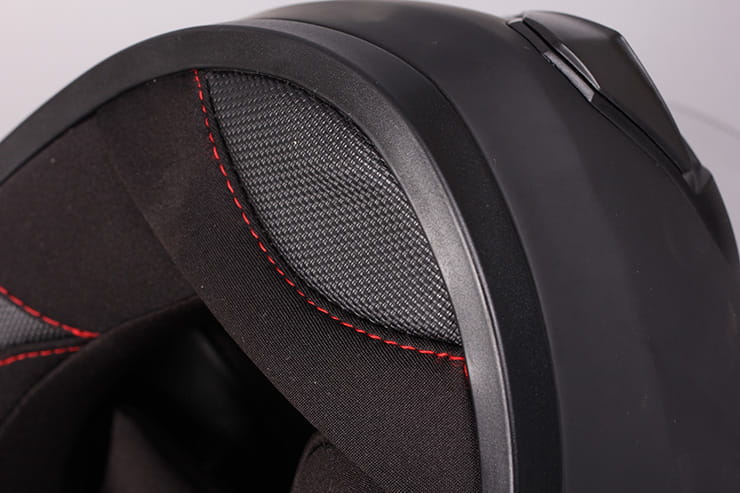 The hypoallergenic lining is very plush and soft, with neat detailing. It’s fully removable, which is great for washing, though it is a little awkward to take out and refit the skull liner. Again, it’s not something you’ll need to do a lot, so it’s great that Givi have made it so easy to keep clean. 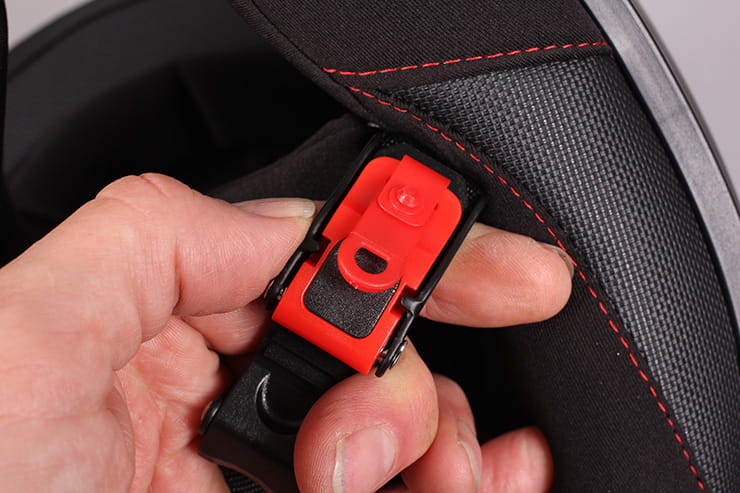 A micro-adjustable ratchet strap is fitted, which is much easier to use than the double-D ring on Georgie’s motocross lid – she tends to get ticklish as I do it up for her. As with all helmets using this form of strap, you’ll most likely need to adjust the webbing to put the ratchet into the correct range – out of the box, even with the ratchet fully closed, the Givi’s strap was much too loose.

Fit is of course subjective, but Georgie found the Junior 4 to be very comfortable, despite being a good tight fit. There’s no dedicated space to fit intercom speakers, so comfort will depend on how your child finds them. I’d recommend popping in a pair of speakers when trying for size if this is important to you.

First impressions of the Givi Junior 4

As Georgie has no real experience of testing helmets, and I can’t get my head into it, I couldn’t tell you how quiet the Givi is compared to adult lids. However, the smooth shell and removable chin skirt should mean it’s equivalent to most other helmets, which means that earplugs are still needed. This is all the more important for a child’s developing ears, so please take the time to find some earplugs that will fit them – you can get a test pack for £9.95 from www.earplugsbypost.com

It’s great to see a helmet made specifically for kids, and despite a few shortcomings, the Givi is a great piece of kit. It’s reassuring to see my daughter in something so protective, and I’d rather use a little anti-fog spray than see her in anything less safe.