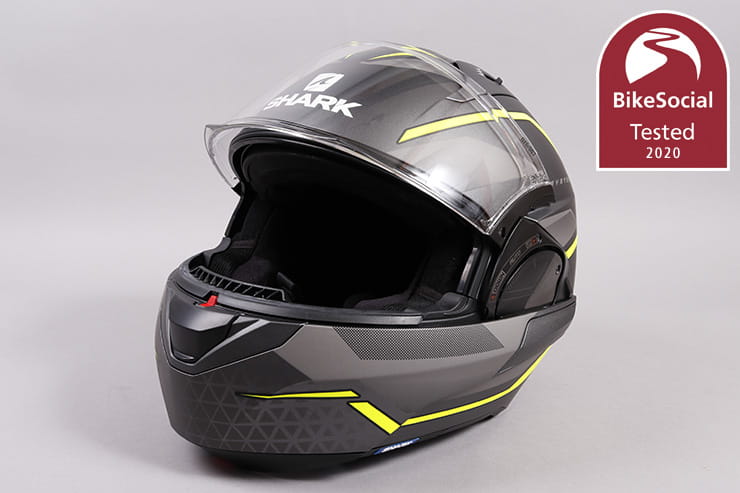 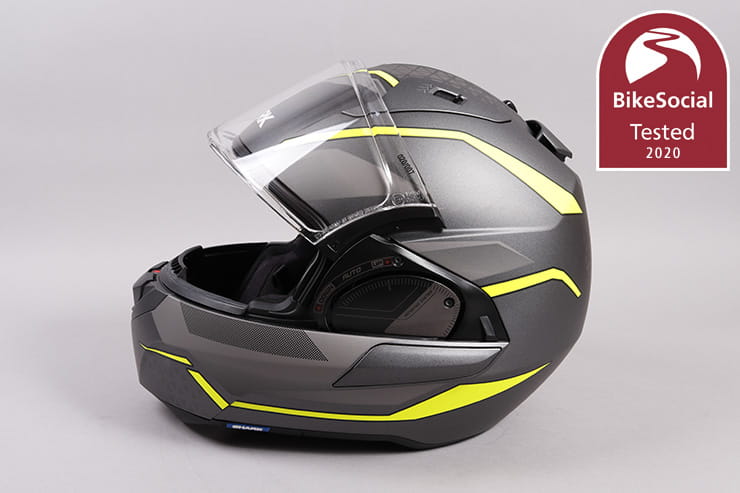 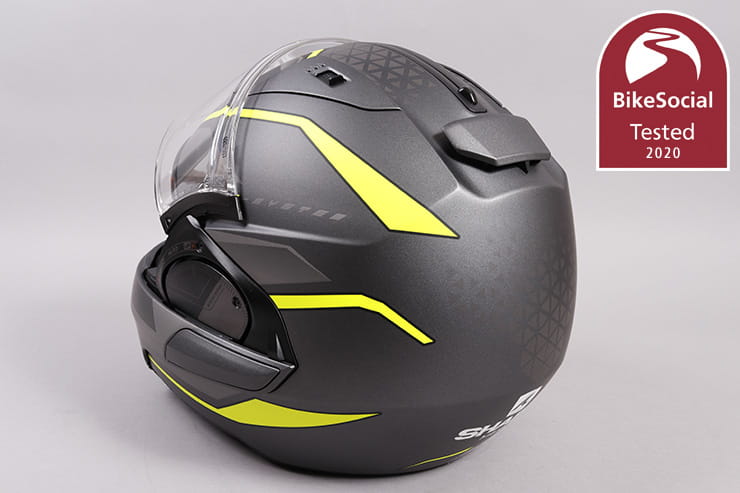 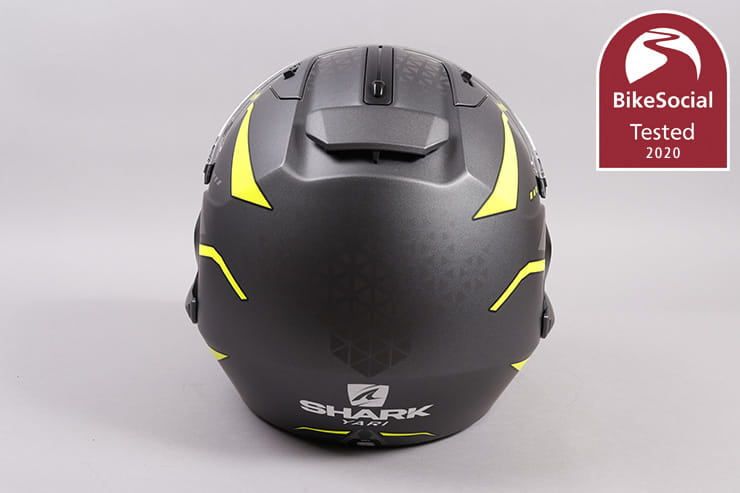 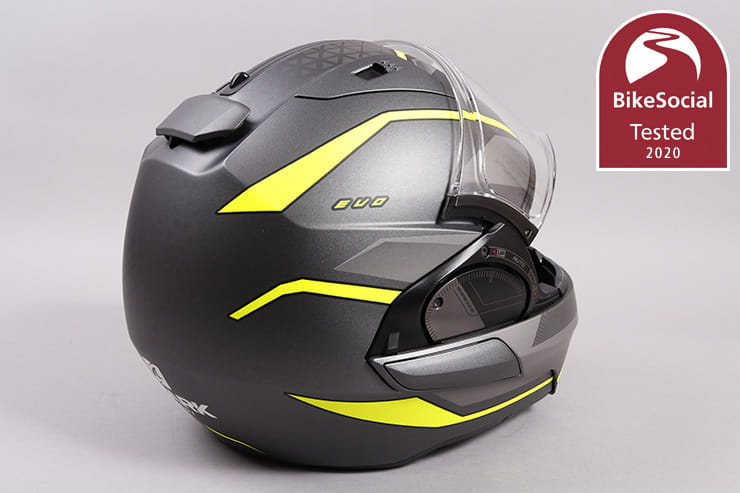 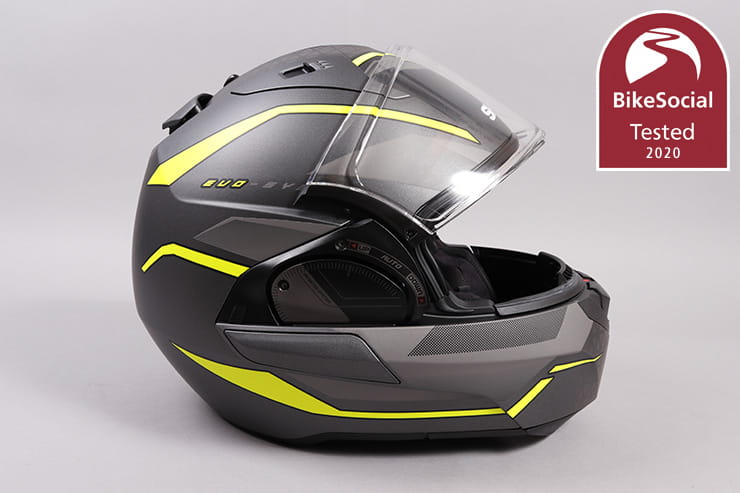 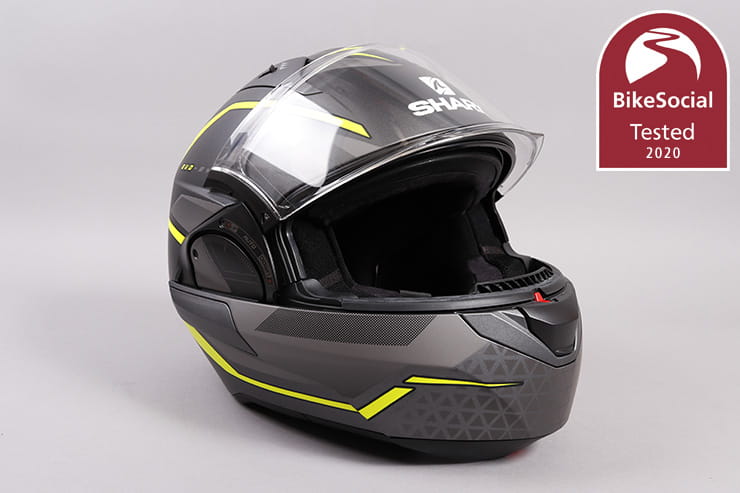 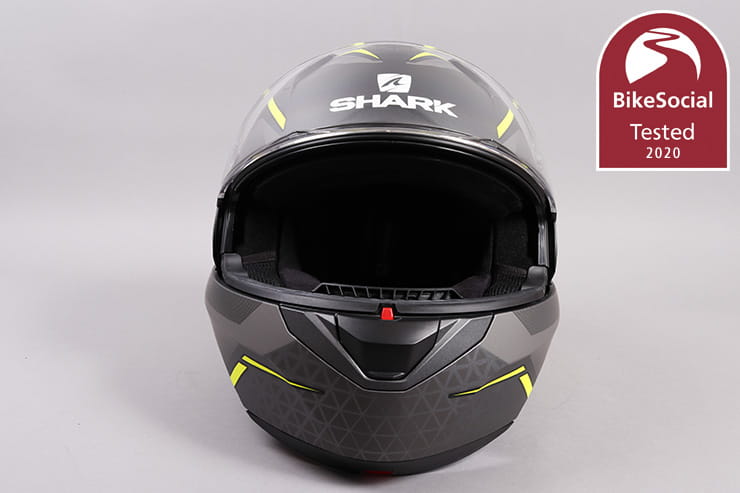 Graham Mudd is a member of Bennetts Rewards and has been reviewing this Shark Evo ES over more than 2,000 miles…

I work 50 miles from home and, come rain or shine, commute on my Kawasaki Versys 650 and Zero DSR workhorses (and for this review, also a Harley-Davidson Livewire). It’s a mixture of rural, fast single-carriageways, dual carriageways and urban roads, so a proper test of any kit I’m riding in.

I also enjoy pottering around single-track country roads with grass growing down the middle, and some gentle byways.

I’ve had the Shark Evo ES for six weeks now and have done over 2,000 miles in that time. The weather has been generally good but I’ve been caught out in some heavy downpours and the odd chilly early morning.

My outgoing helmet is a Shark Evoline 3, so it will be interesting to see how they compare…

The shell is made of injected thermoplastic resin, which is cheaper than the composite materials used in more high-end helmets, but the Evo-One 2, which is the same material, still scored 4/5 in SHARP crash tests, while the Evoline 3 scored 5/5.

Coming in two shell sizes, as someone with a small noggin the Shark fits me well without looking like a mushroom. The key selling point of the Evo series is that they are homologated as both full and open-face helmets. Unlike many other modular helmets, where the whole chin and visor section lift to horizontal (which on the move can act as a sail), the Evos flip the chin bar all the way to the rear and out of the way, making them more aerodynamically efficient, and also making them legal to ride with both open or closed. You even retain the visor and can drop it down to make it a ‘jet’ helmet. A kind of best of both worlds design.

It’s nice to have the option to wear it as you like, and it’s a helmet that’s neither stuffy in the heat nor cold in winter.

The flip is operated with a button in the chin that’s easy to use with gloved hands and the up and over motion is smooth to the click at the back. But I found getting the chin bar back to be a bit awkward at times, and even after six weeks locking the chin bar back in place as a full face helmet, I often need to pinch it down and back through the visor; not a problem I ever had with my Evoline 3.

As a modular helmet, the chin bar is quite large, but this doesn’t impact on your peripheral vision or increase buffeting. In fact, the helmet is very aerodynamic; one of the faults of my Evoline 3 was that it suffered with buffeting quite badly, but the subtle shape change of the Evo ES and the spoiler on the top has drastically improved this.

At 1.65kg, the EVO is slightly on the weighty side compared to many full-face lids, but not to the point it will give you neck ache on long journeys or feel like you have a brick strapped to your head in crosswinds. This is one of the few helmets on the market that’s homologated for use in both roles, and with that come a few extra grams over a full-face, but it’s still lighter than the some of the flip-front market leaders, like the Shoei Neotec II. 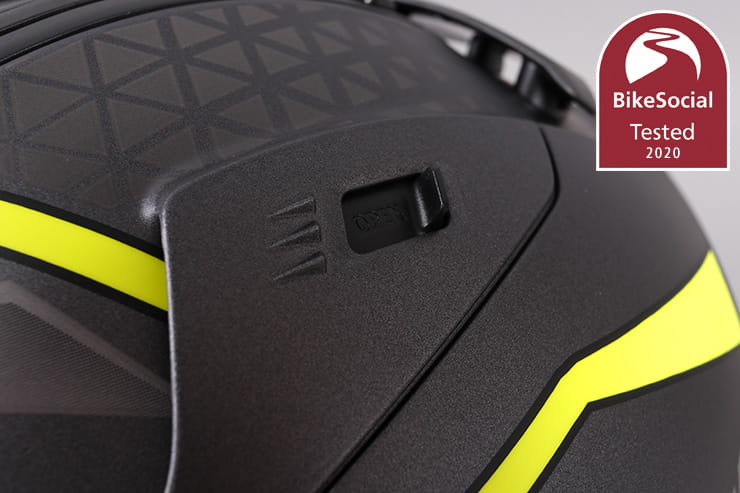 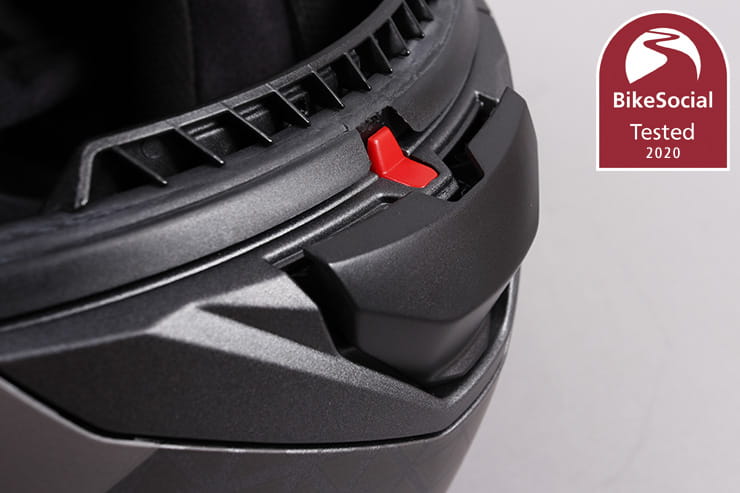 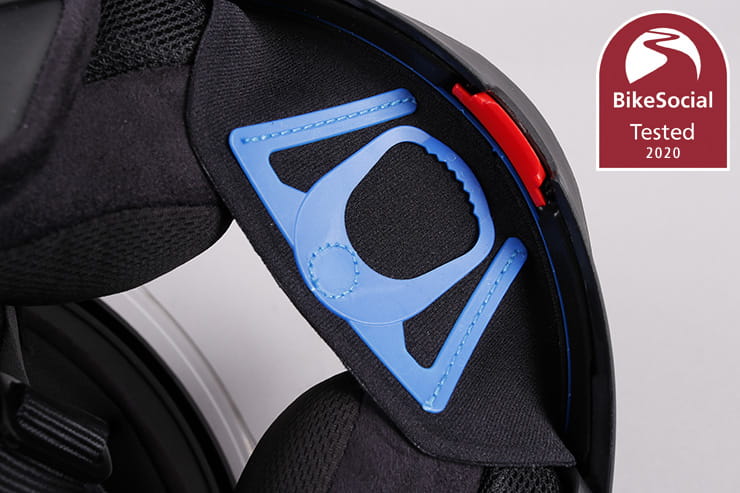 The Shark Evo ES is fitted with a chin vent, two top vents and one exhaust vent. All the covers are easy to locate and operate with gloved hands.

Ventilation is one area where the Evo ES is a marked improvement over the old Evoline 3 as the older lid, with all vents fully opened, produced the faintest whisper of airflow through the interior, making it stuffy in hot weather and prone to rapid steaming up in the cold.

The new ES produces a lot more draught both across the top of your head (which being bald makes a massive difference) and across your face, which has been welcome in some of the warmer recent weather.

Of course, you could ride open face, which I often do, but come winter it’s nice to know that fogging up is less likely.

There is a changeable vent in the chin where you can opt for the airflow to go up the visor (for demisting) or to your face (for cooling), which is a nice feature I’ve not had on any of my previous helmets. In addition to this there’s a chin guard tucked into the mouth area that you can pull down to seal the helmet to your neck and prevent cold draughts getting in. This was also a big flaw in the Evoline 3 as the large gap in the chin meant a cold breeze going across your face and steaming up your visor constantly from late October to mid-April. So full marks on internal airflow. 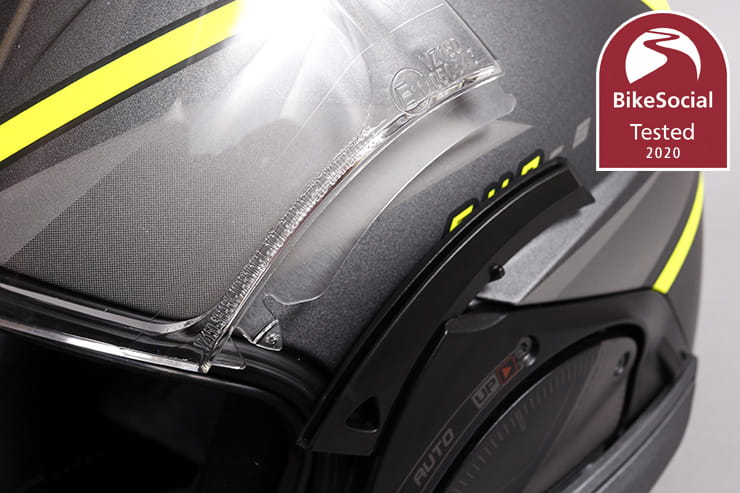 The Evo ES’ visor has an anti-fog coating rather than a Pinlock, which some of the other – more expensive – variants had.

In the limited cool mornings we’ve had so far (I had to zip in my jacket’s thermal liner a couple of times), the coating – which Shark says is the same as used in its race lids – initially seemed to do well, with only a small mist patch at the bottom centre of the glass.

Shark says that that the inside of the visor needs cleaning with luke-warm soapy water then rinsing well to rejuvenate the coating. You can buy products intended to regenerate it, but they are effectively simple cleaners.

I haven’t had much success with the coating unfortunately – while I have cleaned it as recommended, it still fogged up around the lower nose area. It’s not the whole visor, but out of interest I tried spraying on some RainX Anti Fog, which stopped the misting altogether. I could use the visor and Pinlock from a Shark Evo One 2, but that’d be a costly option. Or I could drill the visor to fit my own pins and the VZ150 Pinlock, but more likely I’ll be buying one of these stick-in universal inserts. I had one like this on my Evoline 3, and while I didn’t expect much, it worked well.

The visor shuts with a solid clunk and seals well, so there are no unwanted breezes around your face. At first I was irritated that there was no ‘cracked-open’ option like on my older model, but that’s because I didn’t read the instructions; the ability to direct the chin vent’s air to the visor negates needing a crack option, so in winter your face keeps warmer. A nice little feature, and though I’ve not had chance to test if it works in all weathers, I’ll update this review once I’ve had more time in deep winter.

Visor removal for cleaning is a pain in the bum and requires a worrying amount of force. My old Evoline 3 was much easier, but the Evo ES’ thicker, less flexible plastic means I worry I’m either going to snap something irreplaceable, or the break the biro I’m using to pop it off! In the end I just leave it on now and spray it with visor cleaner. 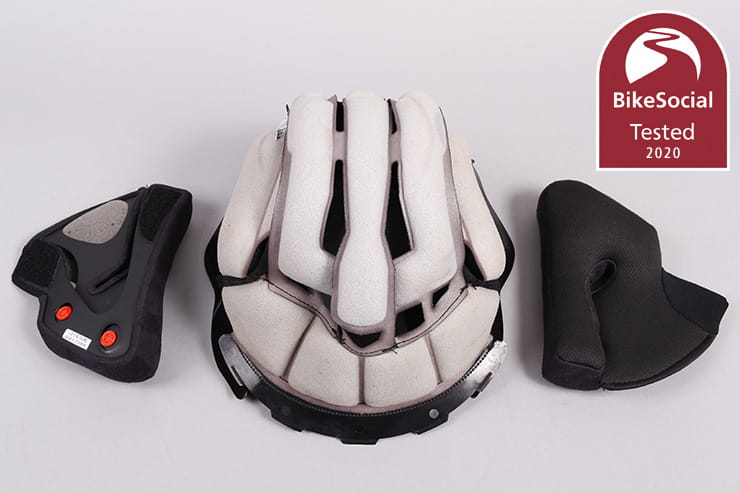 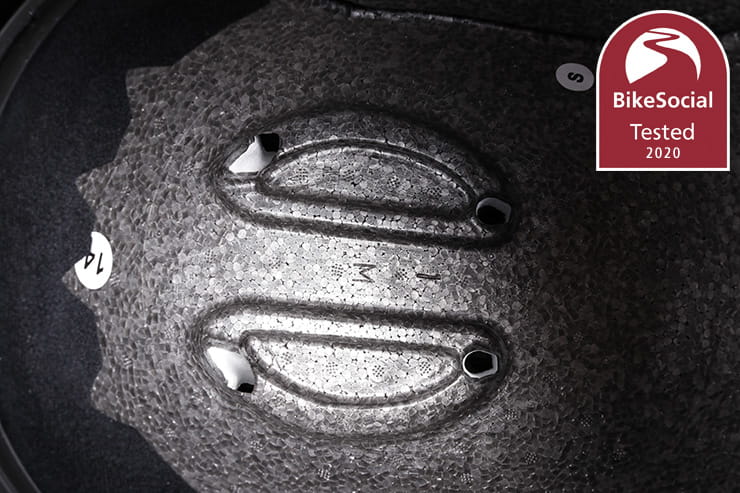 The lining is plush and super-comfortable. In open-face mode.

I know small-sized Sharks fit me as three of my previous Sharks did. But even six weeks in, in full-face mode my jaw feels squeezed. Not distracting or uncomfortably so, but after an hour I’m grateful to take a break and either put the chin up or take the lid off.

I’ve tried the medium and that is a touch big. But small is a touch snug. If only there was a Medium Small. There’s no chance of comfortably wearing my tech fleece balaclava in winter with this helmet [While any lid should be tried on before buying, I have noticed with Sharks that about half the range fit me fine, while the other half doesn’t. John, Consumer Editor].

The lining is treated with anti-microbials, which should stop it smelling quite as funky over a summer of use, and if you did need to wash it removing the lining is a piece of cake. But as has been the case with every other helmet I’ve ever owned in 36 years of riding, getting the lining back in and comfortable is a right faff [I found this one particularly awkward. John]. 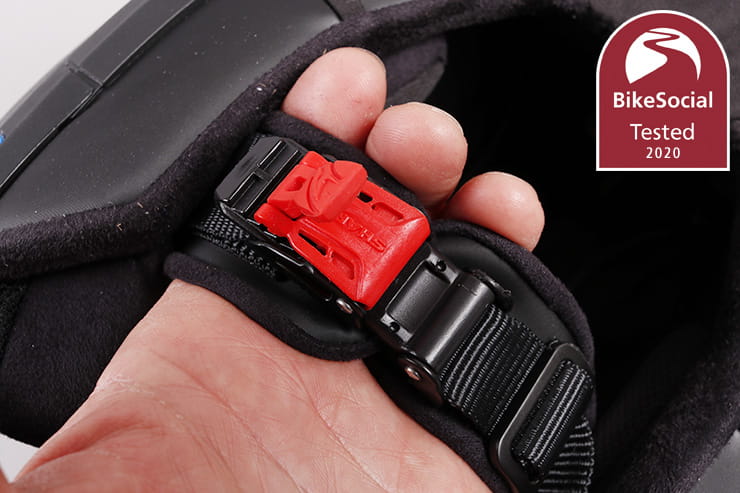 Keeping the helmet in place is done by way of a micrometric buckle, the toothed ratchet strap many lids come with now.

A lot of traditional riders don’t like them, preferring a double D-ring set up, but I love it; the simplicity of click to close, pull on a tab to open, just makes sense to me. Especially when you’ve got cold numb hands or gloves on. Or a paramedic needs to take your helmet off in a hurry. It’s so much easier.

As alluded to in the lining section above, and advice I’d give to anyone looking at buying any new lid, you need to try them on.

I’ve always been a small, and a medium is too big, but the small is a touch too snug even after 2,000 miles and six weeks; well beyond the usual bedding in period. But that being said, even with my wonky-shaped bald head, the EPS foam doesn’t dig into my forehead like it does on other makes; I cannot wear Shoei for this reason as they just don’t suit my Neanderthal-shaped skull.

The cut-outs for glasses work fairly well, my ears only feeling pinched after several hours of riding and the same being the case for the speaker cut-outs, which accommodated my Aldi Special Buy intercom just fine.

All being said the EVO ES gives me complete confidence of offering full protection in both full- and open-face modes, feeling snug and secure in either. 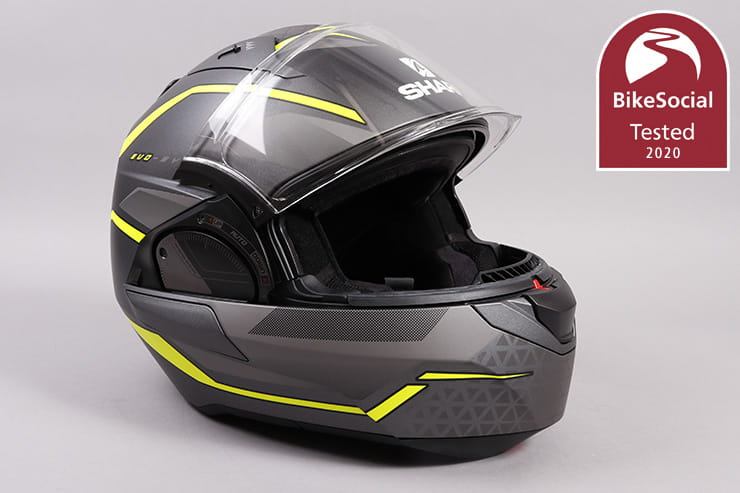 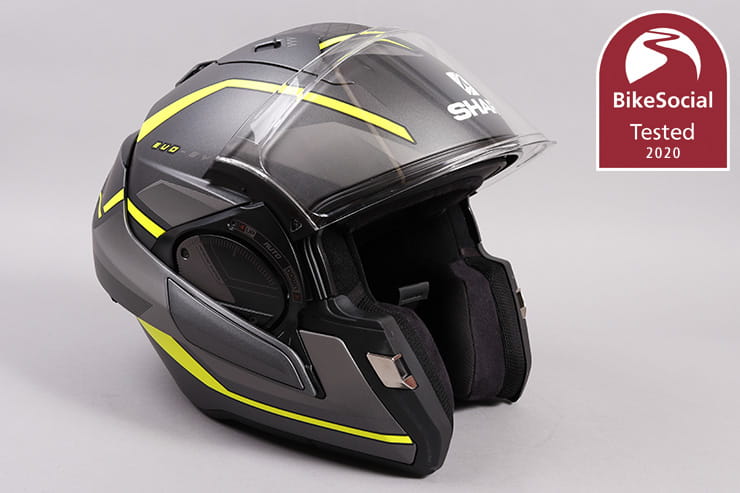 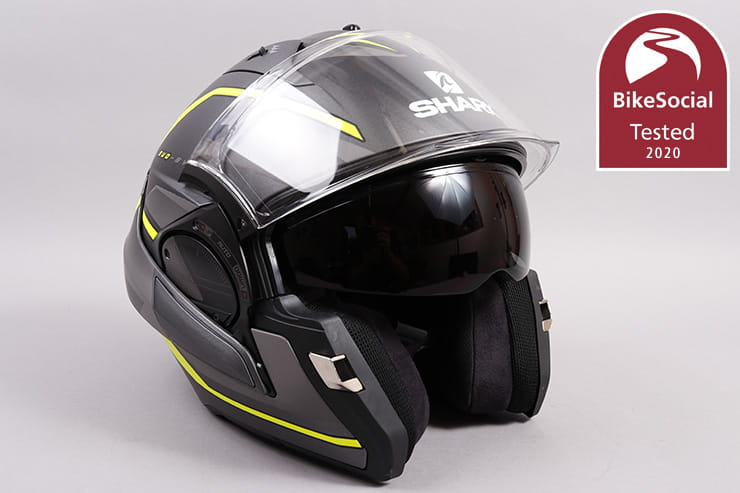 Noise is the Achilles Heel of any modular helmet, and the EVO ES is not quiet. A marked improvement over the Evo 3 it replaces, you will still need some pretty high-spec ear plugs to keep your hearing if doing extended high-speed runs.

You should always wear plugs, but for the sake of testing I left them out when heading for the lanes, and a relatively short stint at 60mph left me with ringing in my ears (on top of my permanent tinnitus).

The constant wind blast on dual carriageways from both of my bikes’ screens would be seriously unpleasant, and damaging, without hearing protection. In addition to this the top vents at a certain angle and speed whistle at a pitch resembling a Police siren. Which is somewhat annoying. 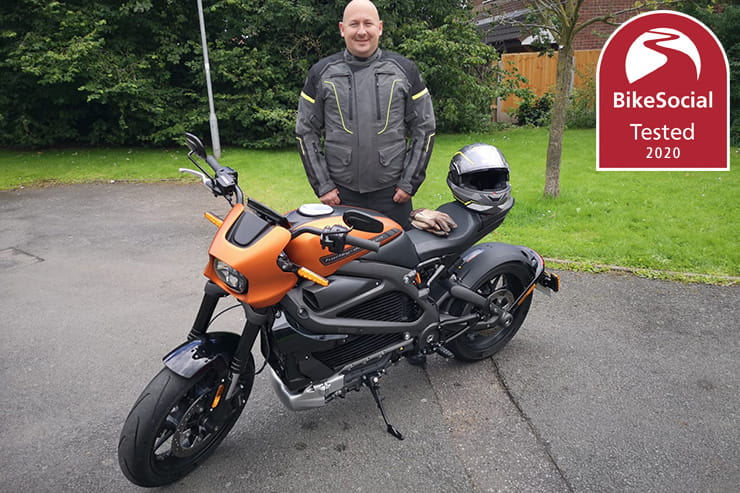 Although not without its flaws, the Shark Evo ES is a good helmet, especially at this price, thanks to that chin bar mechanism giving you the flexibility of open face, jet or full face; simply genius.

Aerodynamic, well-vented with some nice features it has some massive plusses. But it is let down slightly by being noisy, the lack of a Pinlock, and the chin-bar closing mechanism that needs a bit of refining.

Overall though, the Evo would still come high on my list of recommended lids to anyone is in the market for a new helmet.