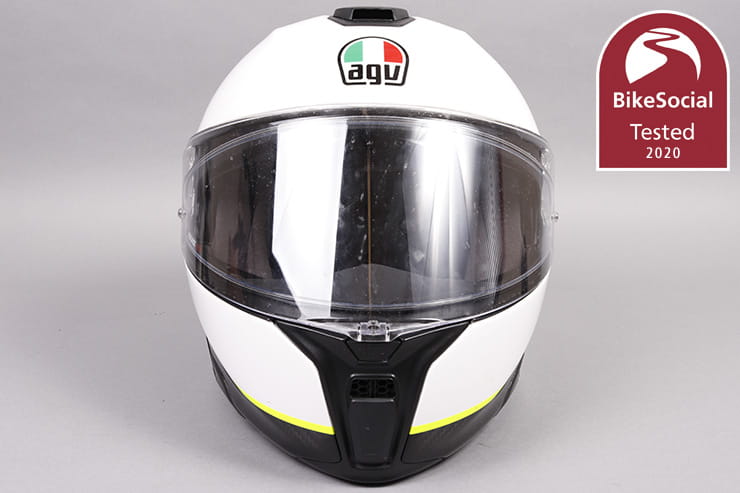 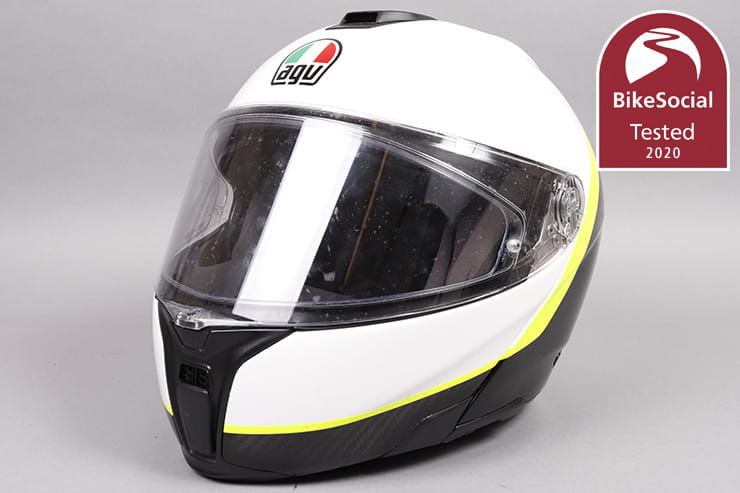 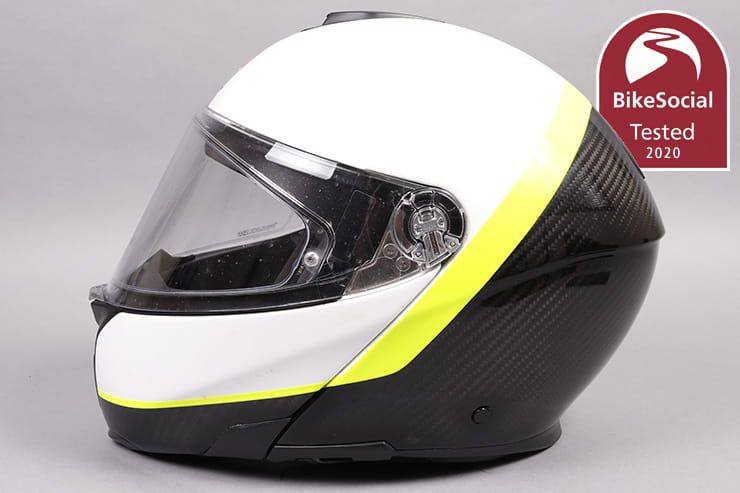 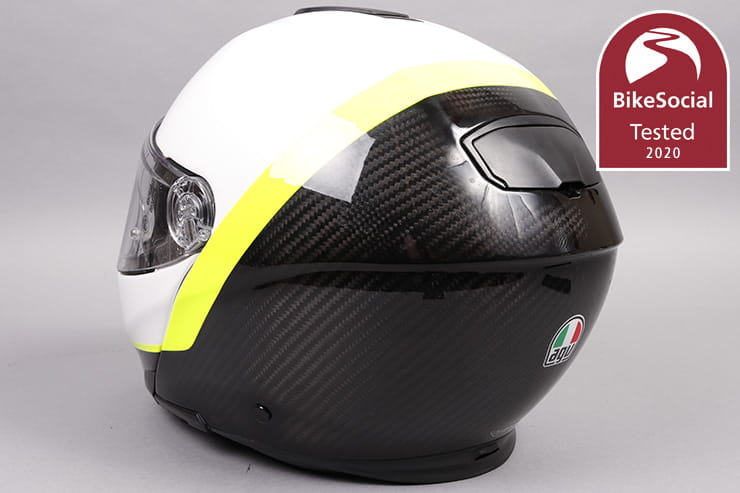 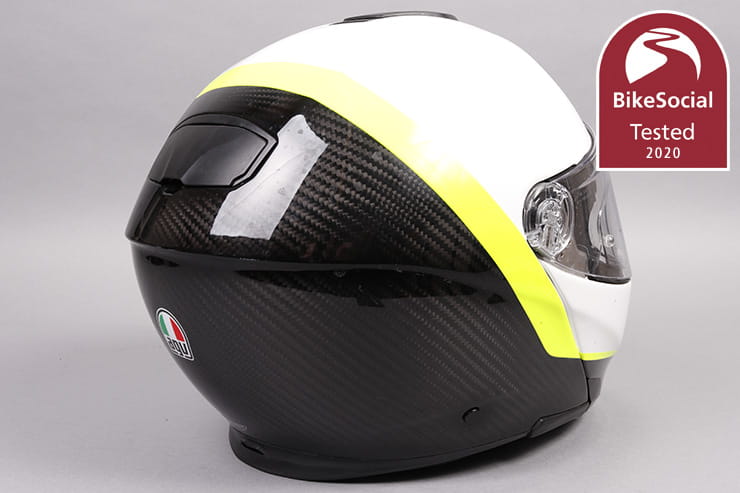 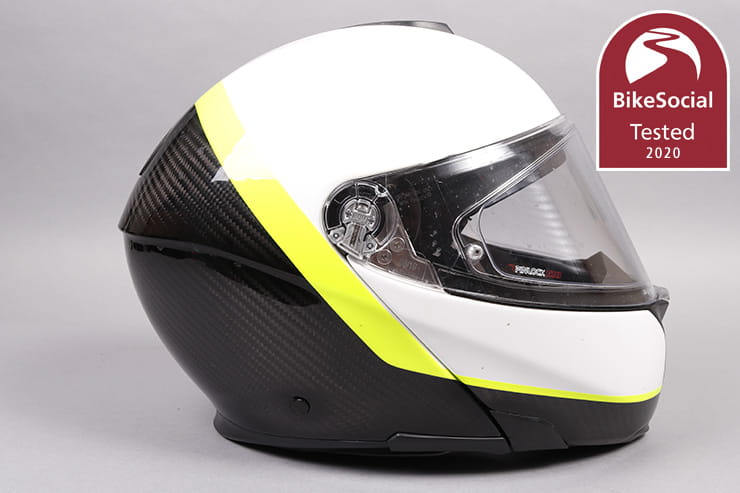 The AGV Sport Modular on review here is the Italian company’s premium flip-front helmet, taking on the Shoei Neotec II and Schuberth C4 Pro for top spot as the most versatile lid available for touring riders.

The AGV Sport Modular is an entirely carbon-fibre shell, and that includes the chin section; on the carbon version of the Schuberth C4 Pro, the chin is plastic, as it is on the otherwise composite-fibre Shoei Neotec II.

The AGV is available in sizes XXS to XXXL, with three different shells and four different polystyrene liners covering the range, so an XXS small user won’t have to put up with a massive XXXL outer shell.

The finish of the carbon-fibre is fantastic, with a deep gloss over the top. This is the ‘Ray carbon/white/yellow’ version, and the graphics are very nicely applied. While the plain carbon versions (available in gloss or matt) are the same retail price as the painted ones, keep an eye out for deals from some stockists, especially on older graphics. In fact, at the time of writing, the entire range was available at almost a third off at one leading UK supplier.

The chin bar is raised by pulling the red button under the chin then flipping it up – it’s easy to use with winter gloves, though it doesn’t rise up as far up as some others, which can leave you feeling a little enclosed with the large overhang.

The Sport Modular is not dual-homologated, which means it shouldn’t be worn open while riding; the Neotec II is approved – look for a P (full face) and a J (jet, or open face) on the strap if ever you want to check. Of course, the previous Neotec I and the Multitec before it weren’t dual-homologated, but that didn’t stop most owners from using them open. The AGV’s chin bars stays up well if you are riding, not dropping down too easily, so this is little more than a technicality for most users.

Unfortunately, the premium finish of the outer shell is let down by the budget look and feel of the plastics used around the visor aperture and other trim areas, as well as the vents.

Weighing 1435 grams in a medium – which is even lighter than the Scuberth C4 Pro Carbon at 1491g – it makes the Shoei Neotec II (1736g with intercom) sound hefty, but this constant battle to offer the lightest lid seems a little irrelevant to me as I’m yet to find a helmet that seems too heavy when I’m wearing it.

What does make a difference is aerodynamics, and the AGV doesn’t feel as if it suffers from any significant drag either facing into the wind or with a turned head. 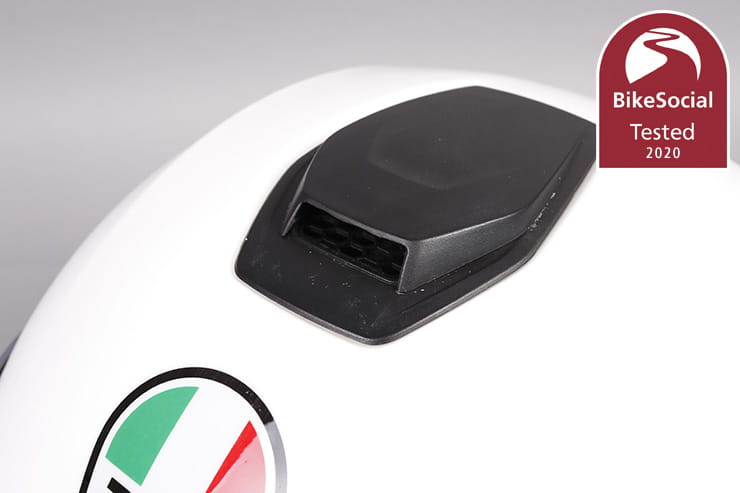 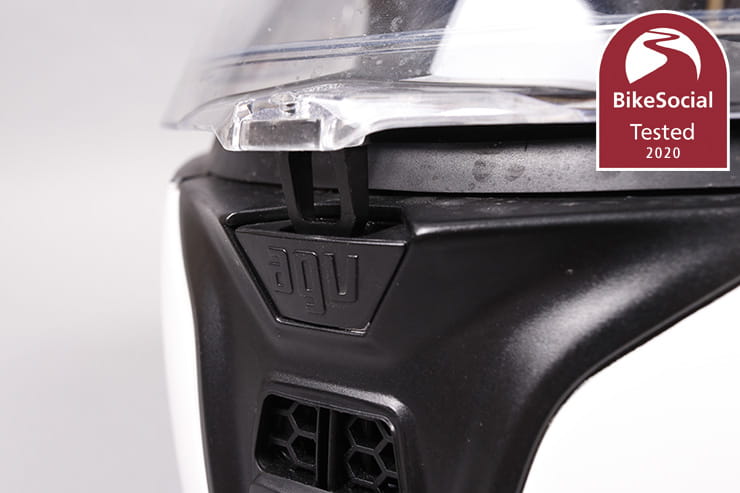 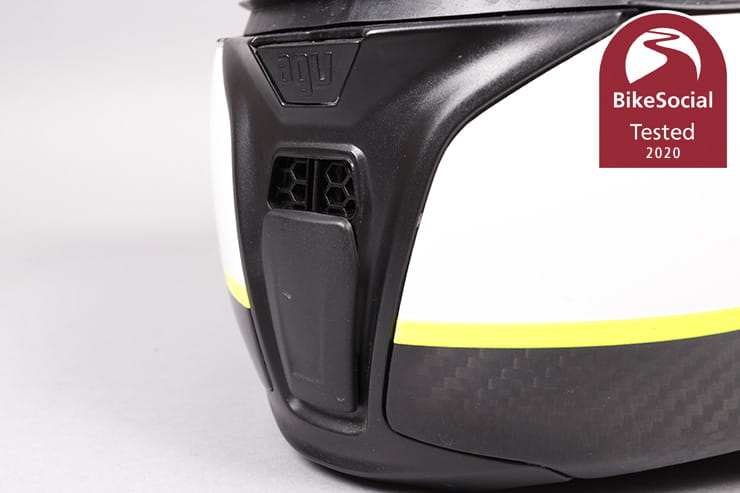 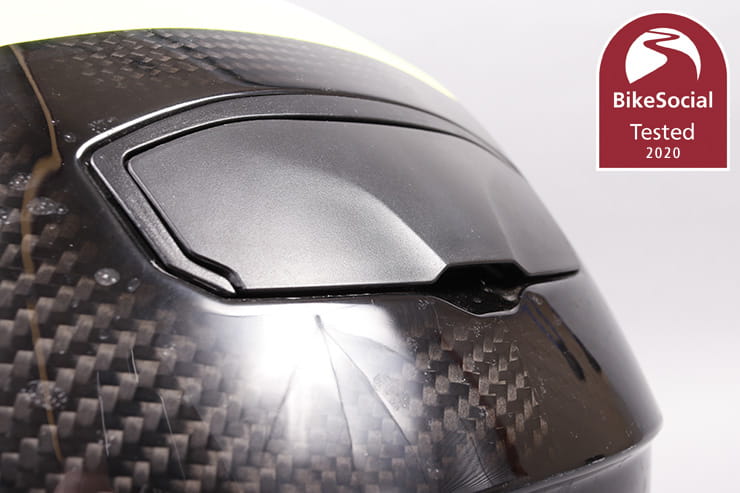 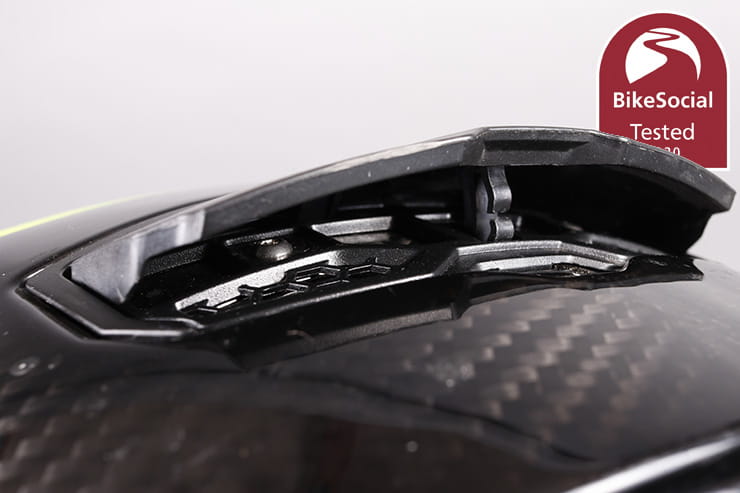 The chin vent is very easy to knock open when putting the helmet on as it’s got a very light action. Surprisingly, it also only vents directly into the mouth, offering no discernible draft across the inside of the visor.

The top vent works well, blowing onto the top centre of the head through two large ports, while the exhaust also has two large ports to draw the air out. With both fully open, there’s a very good flow of air across the top of the head; we’re not talking AGV Pista GP or Arai RX-7RR levels of ventilation as it’s quite localised, but it’s good. It’s a shame then that the exhaust is so easily knocked shut yet so very difficult to open with anything but the thinnest gloves on – I can sometimes flick it back open with the thumb seam of my winter gloves, but it’s awkward. 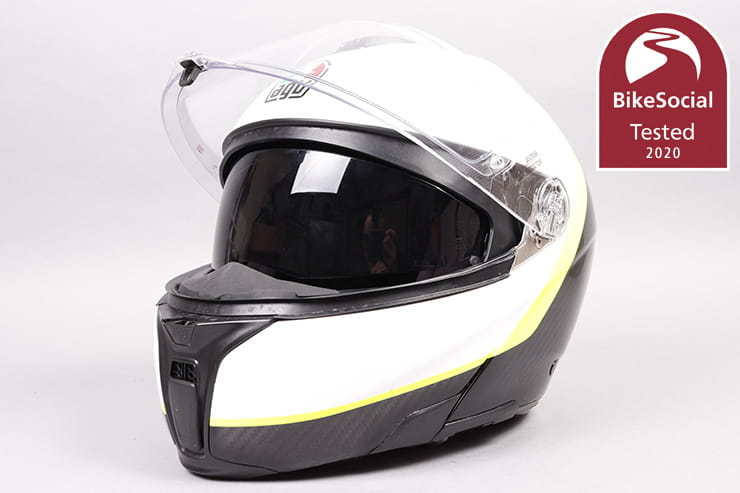 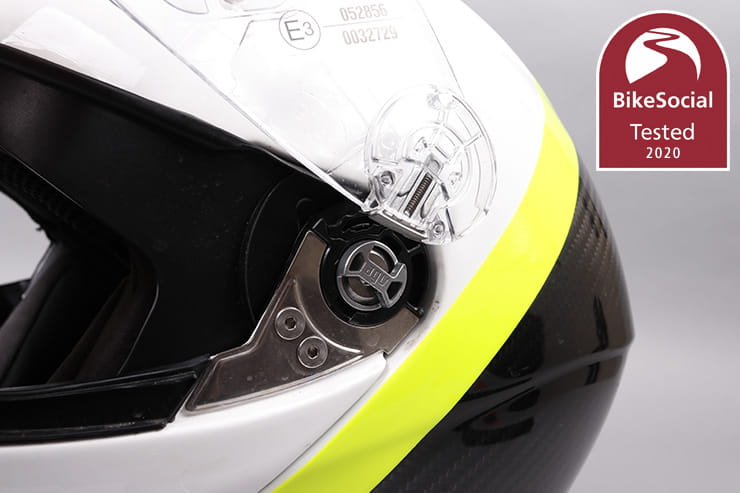 Using catches built into the visor itself, the optical class 1 shield is easy to remove and replace for cleaning. A replacement is a hefty £79.99, and while that’s a lot more than £59.00 for a Schuberth, it’s less than the RRP of one for the Neotec II (£87.99).

AGV boasts about the 190° horizontal field of view of the Sport Modular, but the relatively shallow aperture means peripheral vision doesn’t seems as good as it could be; shoulder-checks take a little more of a tip of the head than you’d expect.

The visor can be set easily in five positions beyond locked closed; while a top-spec Pinlock MaxVision 120 anti-fog insert is supplied, as a spectacle wearer I’m a big fan of the just-off-latched position, which keeps my specs clear when riding through traffic.

It’s slightly irritating that the black plastic visor catch is in your view when the visor’s open, but nowhere near as maddening as the visor catch. Try it in a store and you’ll likely be impressed by the simple push-button that releases the lock to allow you to pop the visor open, but try getting it open as you filter into traffic with winter gloves on and you’ll be cursing it. There is a knack to stroking your thumb up, but with one hand on the clutch and your glasses quickly fogging as you cut between two cars, it’s a clunky system than needs more thought.

Like the Schuberth C4, the AGV’s visor won’t stay open above 60mph on some bikes; the Versys 1000, for instance, directs air from the screen to the top of my helmet (I’m 5’11”), which causes the visor to slam shut. Bikes with larger screens might not cause this, but I found it annoying when I wanted to ride with more air to my face (or with just the sun-shield down).

The drop-down sun visor is handy to have, though I’m not usually a fan of them thanks to the distracting line of light usually left along the bottom edge. AGV has done a good job of pretty well covering the full view with the shield, though it is at the expense of it catching my nose, and the lever is hard to operate with thick gloves on.

In torrential rain, a little water manages to find its way into the top edge of the visor and drip down inside; it’s not the worst I’ve used, but it’s a shame not to have a perfect seal. 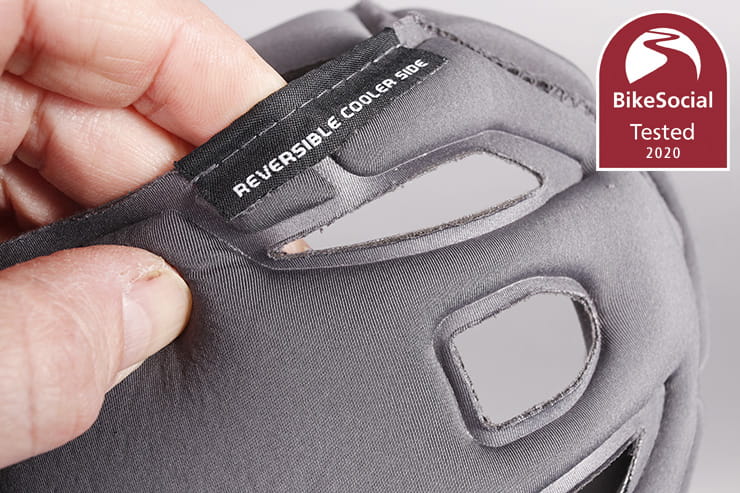 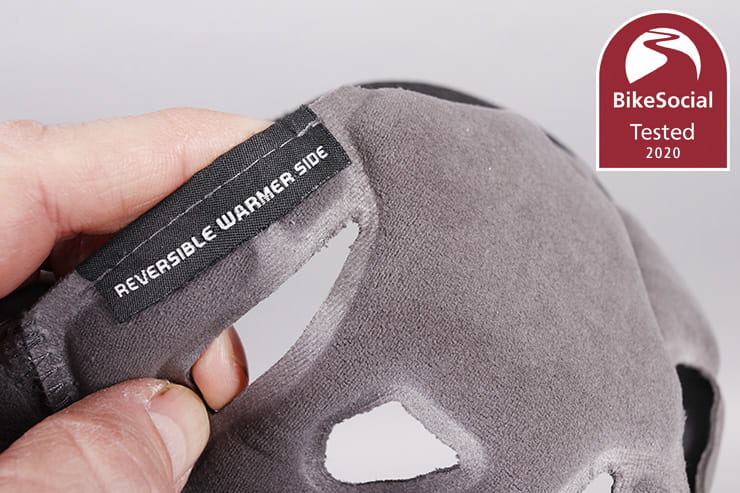 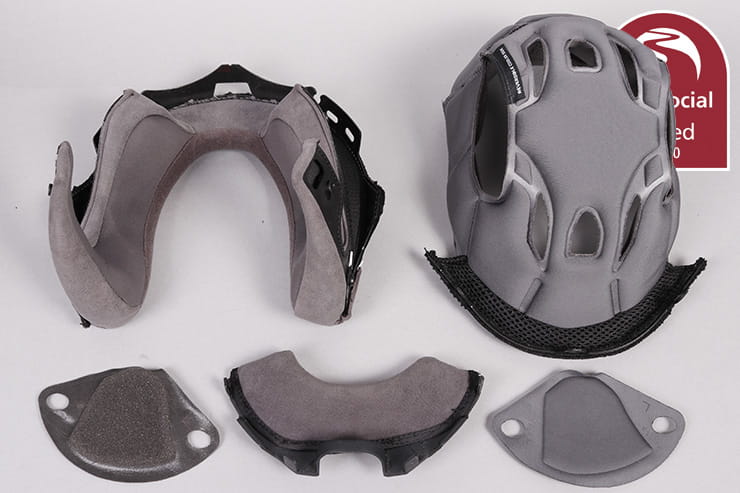 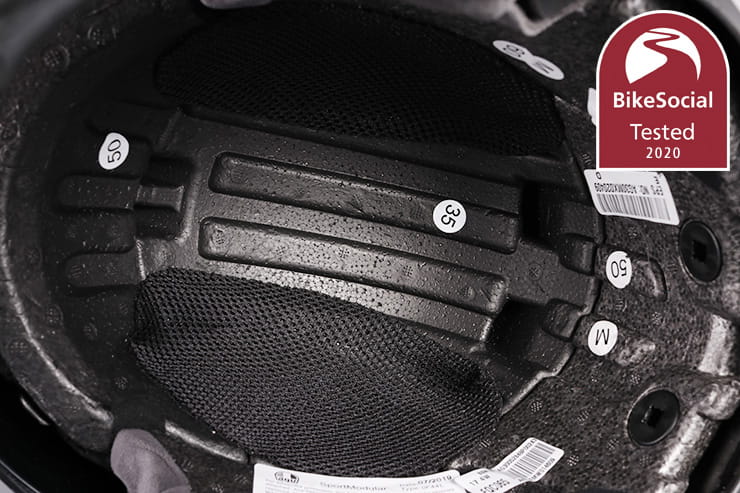 The quality fully-removable lining is well put together, with a reversible skull cap that has a warmer and a cooler side. Behind this is a five-part EPS (expanded polystyrene) insert that gives differing densities at the top, front, rear and sides.

Two chin skirts are included, so you can create a tighter seal, or remove it altogether. 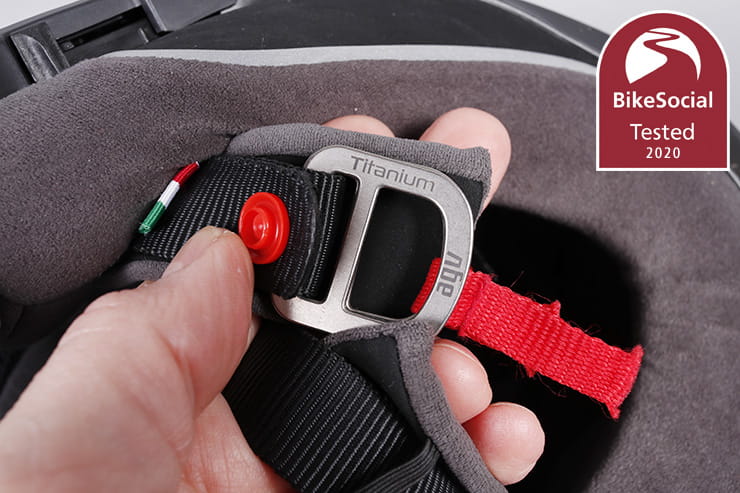 Unlike most other flip-front helmets, the AGV Sport Modular uses a double-D ring strap (the rings are titanium). Favoured by racers, this style gives a precise fit every time, but the micro-metric ratchets used on most other lids of this type are far more convenient, and give an excellent fit once set up properly.

My gripe with this strap is the popper for retaining the strap – it’s mounted on its own strap that makes it flap about so is a little awkward to locate. It’s not the end of the world, but it’s a frustration on what should be a convenient helmet.

The chin is very close to your face, which some might not like – I do find it feels quite confined, which is compounded by the slightly limited opening of the visor and chin bar, as well as the relatively small visor aperture.

However, this is a very comfortable lid – I usually take a medium and this helmet is no different. It’s always very important to try any helmet on for yourself, not to listen to those who just say ‘go up a size’. On some AGVs, there’s a M/S and a M/L, but that’s not the case here.

As a spectacle wearer, I know how important it is that the arms of glasses can fit in the helmet well and they sit comfortable on your face without lifting off the nose or pressing into the head; the Sport Modular has been well designed and works great with specs. 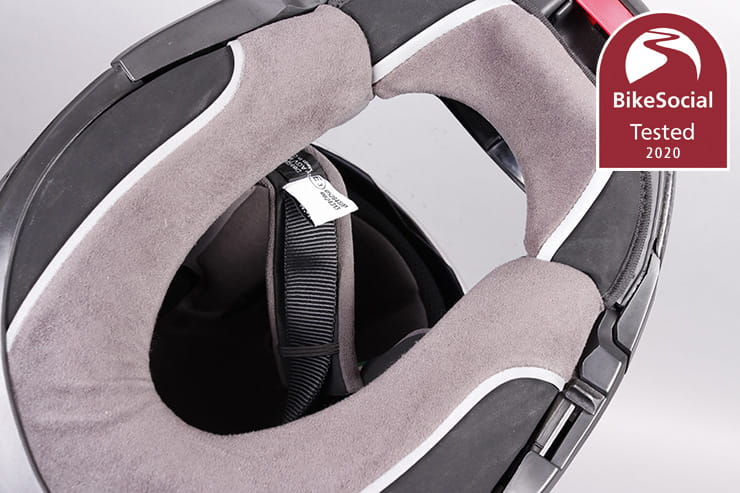 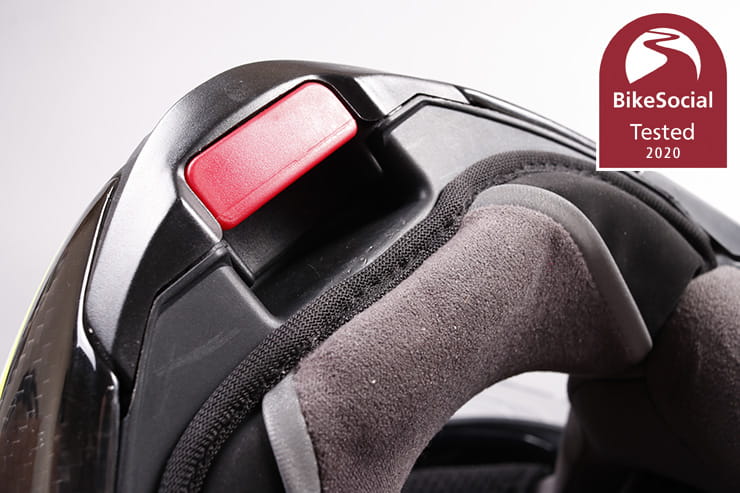 Claimed to have ‘superior quietness’, unfortunately there is still yet to be a helmet that doesn’t require earplugs.

Most helmets are developed at least in part using a wind tunnel, but all that goes out of the window when you add a fairing and screen to the mix. Buffeting and drumming caused by lumps of plastic in front of you will introduce all kinds of turbulence that will affect the noise levels in your lid, and the AGV is no different.

While it will depend on your bike and the shape of your head, I find an uncomfortable air pressure can pulse around my ears; even with earplugs in it can be quite unpleasant, and it’s far worse with the visor cracked open. The standard Versys screen suffers from buffeting, but this pressure isn’t something I’ve experienced on other helmets; while it’s purely conjecture on my part, I do wonder if the more flexible outer shell of the AGV is compounding the problem thrown up by the Kawasaki.

Bennetts BikeSocial’s Michael Mann is a fan of the AGV Sport Modular, and I’m sure others will be impressed, but having used it extensively this winter, and in comparison to helmets I’ve worn over 20 years of product testing, there are simply too many negatives for it to be something I’d choose.

I was excited to try the Sport Modular, but I’m sorry to say that – for an every-day and touring rider at least – there are wiser buys on the market at full RRP. Having said that, given that as I finish this review even the new paint designs are available at £399, if you’re after a more sports-styled lid that can flip open, and aren’t phased by the limitations, the AGV is worth a look; just keep in mind that other modular helmets are also being discounted at the same time too.