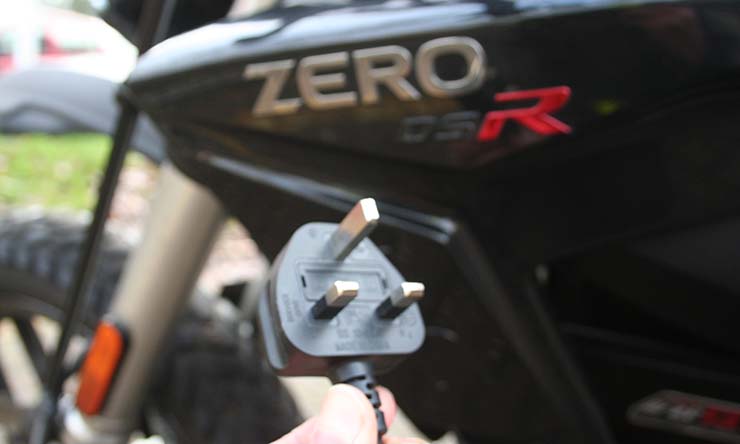 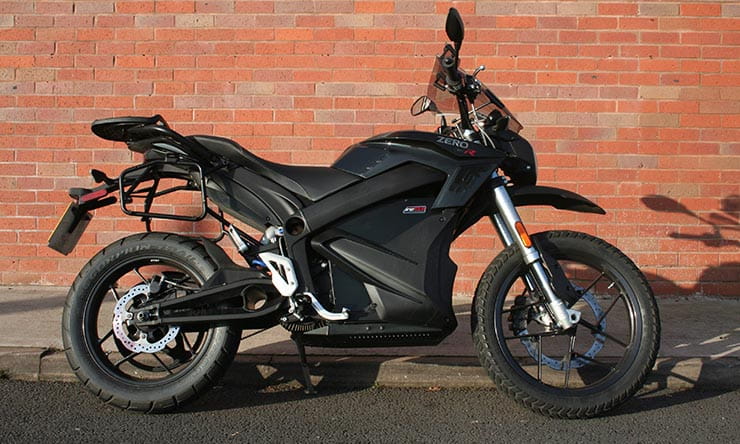 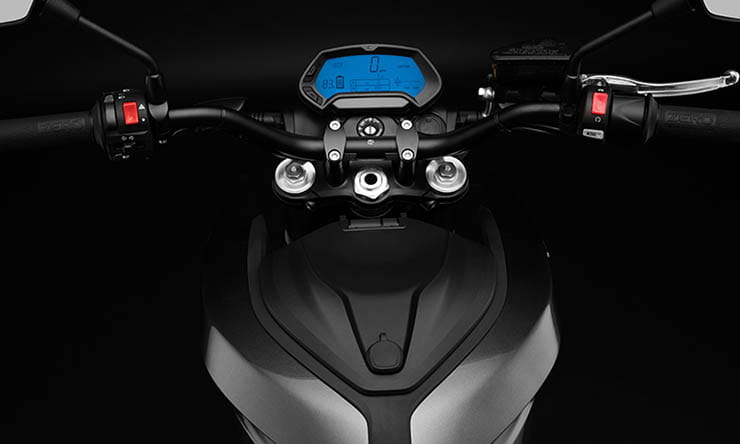 With electric car specialists Tesla making in roads in the luxury four-wheeled electric vehicle market, fellow Californians Zero Motorcycles are back in the UK this year with a range of battery powered bikes that they hope will help make going electric a cool and cost effective alternative. What's more, with the UK government offering grants of up to £1500 to buyers of electric bikes, BikeSocial sent Peter Henshaw out to see if the latest Zeros can make mains power mainstream...

You are looking at the future. At first glance, the Zero DSR might look like any other mid-size trailie/supermoto (albeit one hiding its engine under the plastic) but it is of course powered by an electric motor, with a massive lithium-ion battery supplying the juice. And it's not science fiction, Donald Trump might not like it, but pressure both to and from governments to cut carbon emissions is growing and this is the way most of the world is going. Scotland is just the latest country to propose a phasing out of petrol and diesel cars in cities. The plan is to start this in 2025, just eight years from now.

Against this backdrop, electric cars and motorcycles look less like science fiction and more like a wise investment. In fact, thousands of us already drive a battery-powered four-wheeler, and over 10,000 of these were sold last year, plus many more hybrids. To keep them charged, there's a network of over 11,000 charge points across the country, and that's growing too.

Electric motorcycles and scooters haven't been part of this boom, with sales heading for just 400 by the end of 2016. Most of those were scooters – this, and the occasional spike in the sales figures, suggests most are being bought by fleets, especially fast food delivery outlets and the like. But a few of them are motorcycles, and if we discount motocross bikes like the KTM Freeride, that means Zero.

It's made in California, and since 2006, the Americans have been plugging away (sorry) with this pioneer of electric motorcycles. In the absence of anything from the mainstream manufacturers, it remains the closest thing we have to a practical, day to day, battery-powered bike. And it's finally going to get a boost from Mrs May and her ministerial chums. Electric car buyers have long been given  a grant of up to £5000 off the price as an incentive to buy and now (after 18 months of delay) electric two-wheelers finally get in on the act. If you buy one, the government will contribute 20% of the price, up to maximum of £1500. Even with that largesse, a Zero DS would still come in at £12,190, so is it worth buying?

To find out, I borrowed a Zero DSR from Streetbike of Halesowen, one of just four Zero dealers in the UK and certainly the longest-lived. The DSR is one of a whole range of Zeroes, though they're all based around the same heavily finned electric motor, aluminium frame and lithium-ion battery, and all have the slim build and high seat of an off-road bike, which is hardly surprising as that's what the Zero started out as. The DS is an off-road styled version of the basic road bike, while the 'R' tag signifies an extra 10% or so more power and torque, which translates into 70bhp and 116lb ft. That should be enough to give the 187kg bike some lively performance.

Now then, the range. Zero claim 110 miles of urban (ie slow) riding for the standard 9.8Kwh battery, or 147 miles for the optional 13.0Kwh. You can add a separate reserve battery of 3.3Kwh but, whichever one you choose, Zero claim it will last for over 300,000 miles and offer a five-year unlimited mileage warranty.

At the price, you'd expect the Zero to have some decent components, and it does, with key bits from Showa, Bosch and Pirelli, ABS brakes and fully-adjustable forks and rear monoshock. Final drive is by toothed belt, so there's no chain to adjust and lube – in fact, a dramatic cut in maintenance should be another upside to going electric, with no oil and filter to change, or valve clearances to adjust. 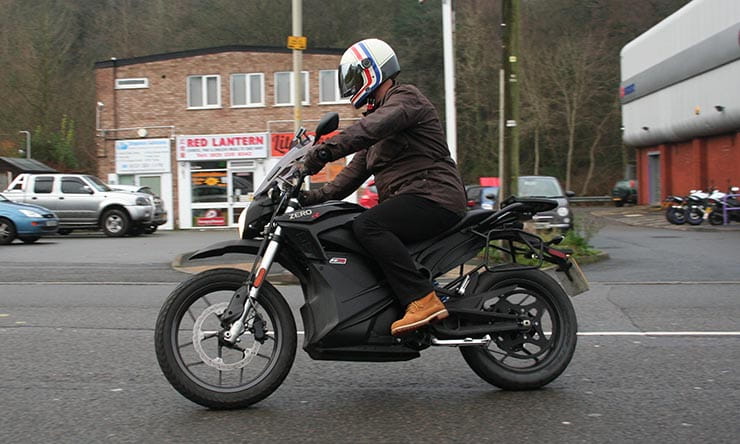 Riding the Zero isn't difficult – just ignition on, flick up the side stand and away you go, with no gears or clutch to think about. Electric motors are famed for their good torque delivery from low speed, but on the Zero it's also very progressive, so you can take off from rest as gently as you like, making the bike a cinch to ride in traffic. That's aided by the slim dimensions, high seat (tippy-toes for me but delivering good visibility), good manoeuvrability and fine brakes.

There are three power modes – Eco, Custom (in which  you can tailor the power delivery to taste) and Power. In Eco, the bike is quick enough for brisk urban traffic, but turn it onto Power and you get expectedly violent acceleration if you twist the grip right back – the response is almost instantaneous and all the more surprising because there's no clamouring engine sounds to go with it, only wind noise.

Heading out on the M5 motorway and the Zero quickly whipped up to an indicated 90mph and was still accelerating when I decided to ease back down to 70, so yes, it's easily fast enough for motorways. This version is blowy though, due to its upright motocross style riding position.

Rather than just head into Birmingham and back, I wanted to give the Zero's range a good workout, so we headed up the A38 to Derby where I was due to ride the Brixton 125. We got there OK, but I was alarmed to see that the Zero had used 65% of its available juice to cover 55 miles. Fortunately, it comes with a built-in charger and lead, and can charge from any three-pin socket – a couple of hours boost took us up to 56% on the battery. This turned out to be plenty to get back, because those 55 miles were mostly motorway and dual-carriageway but riding back I took a slower more urban route through northern Brum, and we used far less power. Based on that ride, I would say the Zero has a range of about 80 miles at 60-70mph and 120 miles at 30-55mph. Not enough to tour on, but plenty for a long commute.

The Zero is state-of-the-art – decent quality, easy to ride and very quick, with enough range to be practical. Although it's very expensive, running costs should be minimal, but can it make financial sense? Well it can if you commute all year round. Compared to a 50mpg 650cc petrol bike, ride 6000 miles a year and the Zero will start saving you money after about six years – at 12,000 mile/year, make that three years.

Thanks to Streetbike for loan of the test bike.