Dinner with Josh Brookes, Niall Mackenzie and Terry Rymer, it’s not your usual Tuesday night out but is to be expected if you’ve bought a Yamaha R1M. 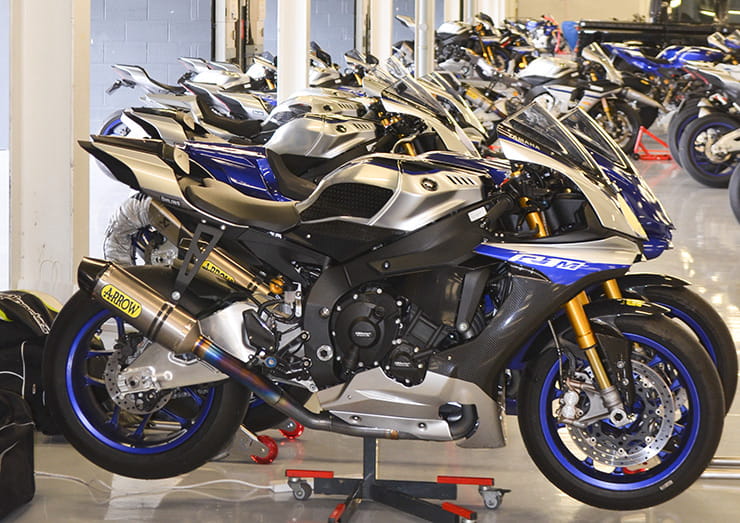 After taking delivery of your gleaming new road-legal Yamaha super bike you are sent two things; the first is a year’s break down recovery. The second is an invitation to the exclusive Yamaha Racing Experience with two events being held annually; one in Mugello and the other at Silverstone.

The Racing Experience is as much a thank you for choosing Yamaha as it is an introduction to your new bike. The R1M is loaded with so much sophistication and an electronics package that could have been developed in the space race. If you are like me and rarely read the instruction manual to anything, then this event is perfect as it offers the practical for how to get the best from the bike. 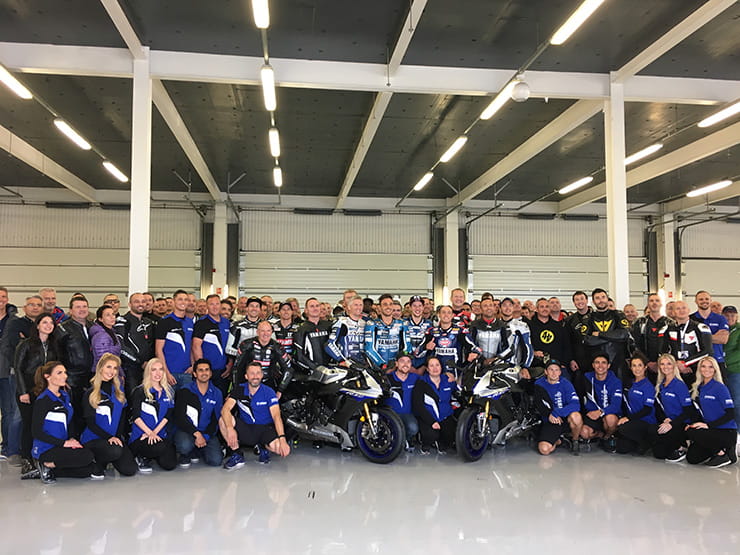 On arrival at the Wing at Silverstone you get the impressions that the day will be different from the typical track day. Yamaha Racing banners line the fence of the car park and a meet-and-greet service with instructions where to park up.

The signing-on area is flanked by a lounge area with serviced teas, coffee and cakes. I test it, you know for the purposes of a thorough review of the day! Then there’s the goody bag, filled with bits from the Yamaha partners also present on the day.

Tamworth Yamaha were offering clothing, accessories and a large selection of exhaust baffles. This was especially useful as my baffle had exploded at our recent Bennetts customer track day and Silverstone are strict with noise testing. Yamaha had a few bikes on standby to loan if the noise test failed.

The format of the two-day event is seminars on day one, followed by a gala dinner and then on track the following day. Before heading in to the first seminar I took the time to wonder through the pit garage, ogling at the 200+ R1Ms, a feast for the eyes. I heard one owner saying that he can always see his bike at a bike café because it is the only one. Not this time, sir, I thought. 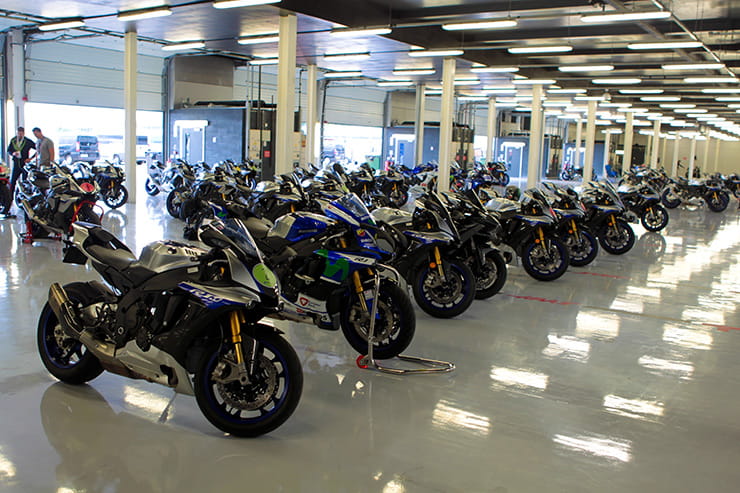 Some bikes were fully standard, sitting on their side stands while others looked like they were levitating on their paddock stands with tyre warmers. There were even fully race prepared bikes that had seen recent race action with scrutineering stickers visible. I made a little mental calculation, 200 hundred bikes at £19,500 ish plus £2,000 / 500 for an after-market exhaust makes approx. £4.2 million worth of R1Ms in one garage. This was not taking the WSBK and the MotoGP bike on display, so you can add another million for each of those easily.

Also kicking around the pits chatting were who Yamaha call the champions ‘past and present’. Owners were rubbing shoulders BSB riders like Josh Brookes and James Ellison, and WSBK rider Alex Lowes. Niall Mackenzie, three time BSB champion, and Terry Rymer, Team Manager, BSB and World Endurance Champion, were also wondering around speaking to the people who would usually be on the other side of the safety fence watching them race.

We were sent tutorials and links to videos in the welcome pack mailed out in the days leading up to the event. This was backed up and all the information was presented to us on a USB memory stick after the seminars.

There were three rather useful seminars. First up, Ohlins product specialist Andrew Notman explained how the electronic racing suspension worked and what the different settings meant and how they affected the bike. He was then on hand to check and set our bikes up individually. You can read more about the suspension in my first review and the following update. 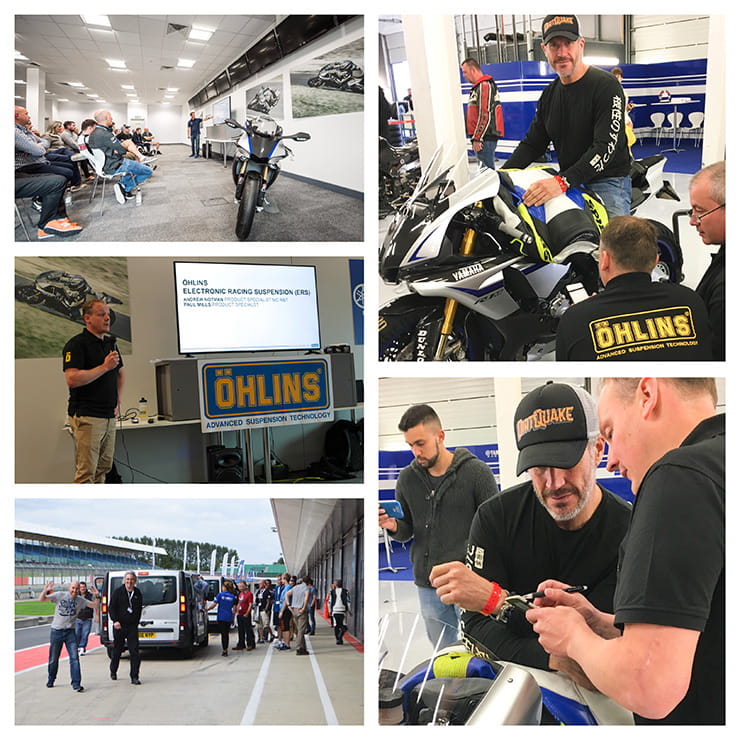 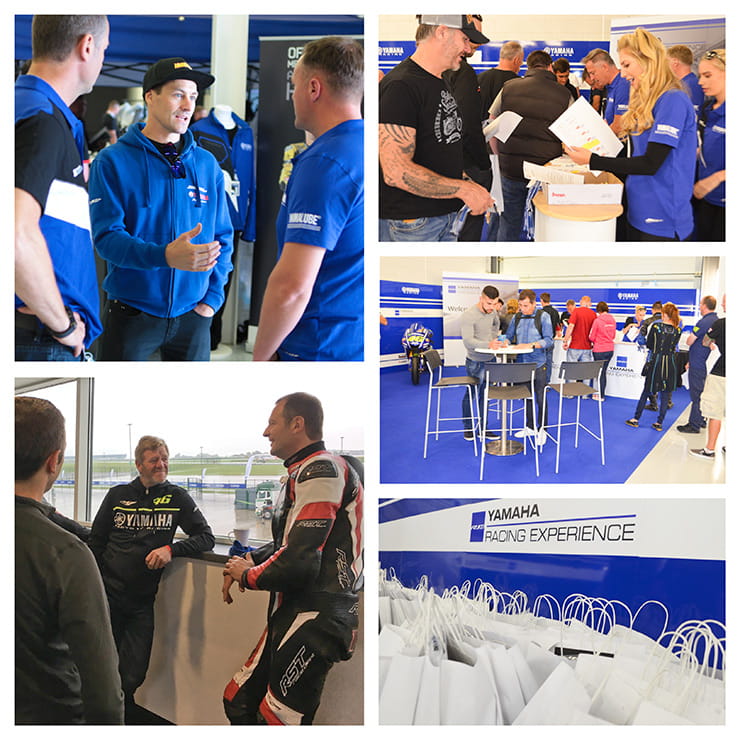 We were then introduced to the apps that link to your bike that both send and receive data from the bike and record all the data logging. All this information when analysed can help you to understand what you are doing on the bike and where you can make rider improvements. This sort of technology is straight from MotoGP. In the endurance racing pit stops they download the data remotely and then on the next stop they can make adjustments to the bike based on the information.

Then Paul Denning who has been a team boss and owner in BSB, SBK and MotoGP gave a talk about the development of the R1M and the cross-plane engine. It was really interesting to learn that back in 2004 soon after Valentino Rossi joined Yamaha they presented him with a number of engines to test. He chose the cross-plane which at the time was the slower engine but he felt that he could get the most from it in development. Vale has been involved with all the engine and electronic development in the bike.

Vale’s opinion; “When the first electronic systems arrived in MotoGP, it was a kind of shock for the riders, but now it’s completely different. The systems have improved a lot and now they can work in a very natural way, to help you bring the bike close to the limit”.

After the seminars and before we left our machines under guard in the paddock everyone was taken around the circuit in mini buses so those that had not been on track before could see the circuit close-up and put some of their fears about the track to bed. After the sighting lap we were ferried over to the luxury Whittlebury Hall Spa hotel. On the red carpet entrance to the dinner all the champions past and present formed a line and greeted and shook the hand of all the owners. This was extraordinary stuff. 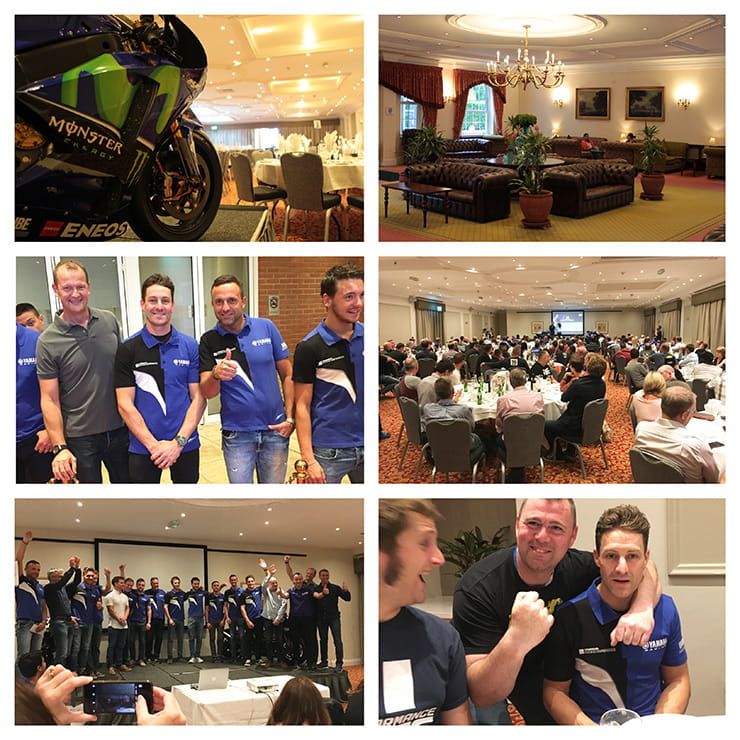 The lavish dinner was served and between courses there were talks and Q&A with the racers. The highlight for me was listening to Yamaha MotoGP team boss, Lin Jarvis. If you have read Vale’s biography you will know that Lin was instrumental in winning Vale over to Yamaha. It was an absolute treat listening to him speak about the race season and a little bit about his relationship with Vale. It was great to hear him say that the despite Vale being the oldest rider in MotoGP at present he still had aspirations and wanted to take his 10th world title.

The dinner gave me the opportunity to chat to some of the other owners. There was a really broad demographic and I found it interesting that a high number of people that had bought an R1M had never been on a track before. Not only had they not been on track but said they had no intention of riding on track again. After all, the R1M is a race bike that happens to be road legal.

An owner at my table had travelled ten hours from Glasgow to attend and had even been to the event last year. One had written his R1M off, replaced it and got another invitation! He was pleased to show me the data record and map showing his trajectory through the centre of a roundabout where he had smashed the bike. One owner had recently added the R1M to his collection of bikes. Another was racing at a national club level and his bike was damn near superbike spec. One of the guys admitted that he has been saving for some time to get his teeth fixed, he never told his wife that he had spent the money on a new bike…yet!

The Yamaha Endurance team had just won the Suzuka 8-hour race and they were there talking about the race. At our table we were being told a story of how Josh Brookes had just made the save of the century at the Suzuka 8-hour. He had his knee down, it dug into the dirt and pulled him off the bike, as he flew off he grabbed the seat and pulled himself back on. Our story teller said “don’t just take my word for it” and came back with Josh who told the story in his own words.

Most of the tables had a champion or two making this dinner a money-can’t-buy experience for most.

On track the following day riders were put into groups based on their experience, they are then lead around the track by the champion riders. Again, a great experience. I had just fitted new Dunlop D212 semi-slick track tyres and was looking forward to shredding them but overnight it had rained heavily and was still torrential. The rain was flying sideways across the garage door. The sort of rain that bounced. Some of the access roads to the track were flooded.

Latest updates to the BikeSocial R1M:

To further improve the immense stopping power of the R1M, I’ve fitted Brembo road and track brake pads to increase the feedback too. They are almost too harsh when you come to a standstill, they grip so much that you can feel the floating disks move. After fitting the pads I fitted a Brembo 19 RCS master cylinder which I had this spare from a race bike. Fitting caught me out as most bikes have two braided hoses coming off the master cylinder meaning a double banjo bolt is required. The R1M has a single hose which leads down to a branched junction so the hunt was on to find a single banjo. I fitted a single pressure switch bolt too which activates the brake light. As I have the Brembo dedicated switch I will fit a single banjo when I get the chance. The RCS combined with the pads give you all the braking you will ever need.

After listening to the Öhlins seminar and being introduced to their electronic steering damper I fitted one to the bike. It was simple but a little time consuming to fit as you should remove the front of the fairing. The bike is already set up with a dedicated plug-and-play option for this damper.

I could feel the difference immediately particularly at lower speeds where there’s both more resistance and damping. Most electronic dampers tend to offer more damping at higher speeds, I find I tend to get out of shape with tank slappers on my way to the higher velocities. The bike does not have wheelie control it has rate-of-lift control instead. This means you can still get a little air under the wheel with the throttle on. Pushing hard over a tram line I upset the front enough to see how quickly the real-time algorithm could do its thing. It was fast enough to smooth things out before things went full lock to lock.

The bike feels far more stable and the front is more settled and for me, it just made sense to have the damper compliment the Öhlins Electronic Suspension. At high speeds there is more damping and stability too and although I’ve only tested the damper on the road, I’m looking forward to testing it in anger at Cadwell this month. 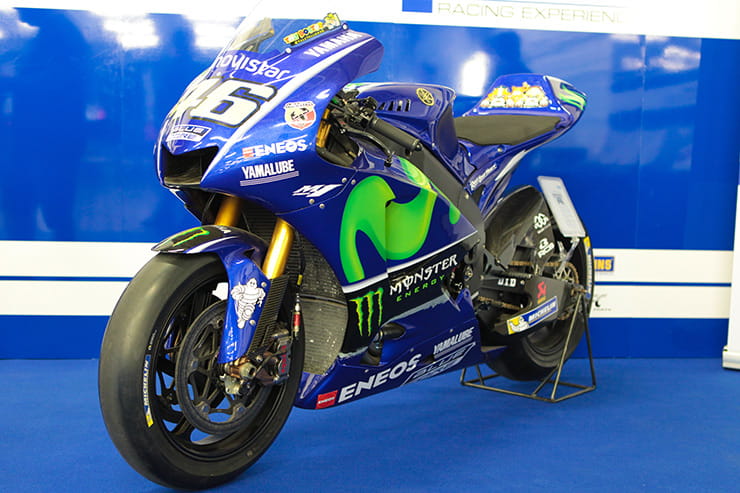 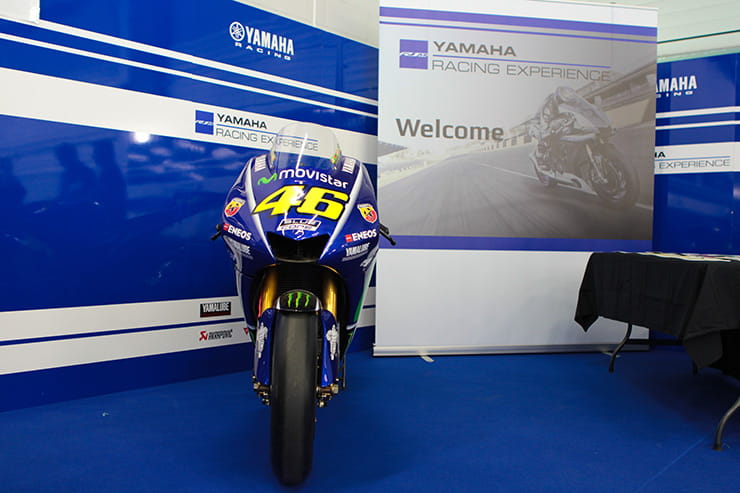